“This is Bill Gates saying we should put chips inside people," Don Bolduc falsely claimed before vilifying masks 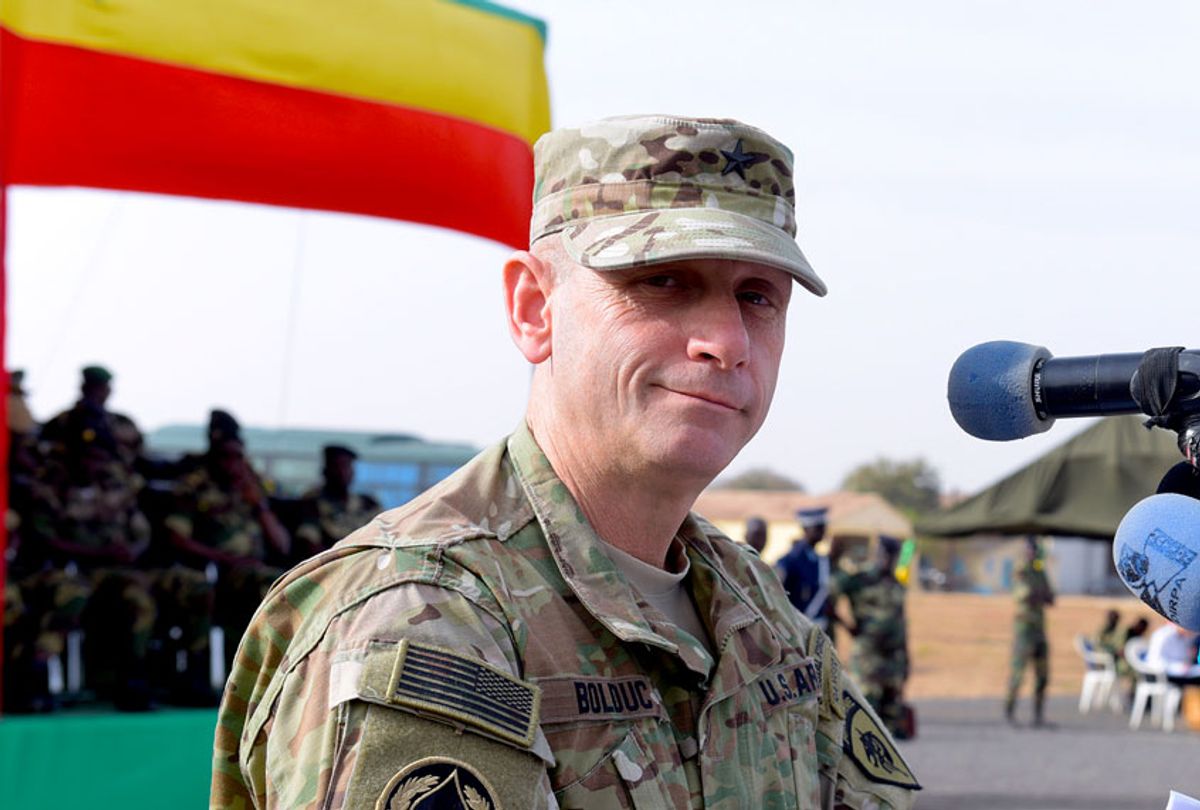 Former US Army General Donald Bolduc delivers a speech during the inauguration of a military base in Thies, 70 km from Dakar, on February 8, 2016 (SEYLLOU/AFP via Getty Images)
--

A New Hampshire Republican Senate candidate on Friday disputed medical experts calling for the use of masks to slow the spread of the coronavirus despite having no science or medical background.

Republican candidates across the country have echoed President Donald Trump's skepticism about masks on the campaign trail. The president claimed in a recent interview that masks may make people more likely to contract the coronavirus, in addition to suggesting that they are worn as a sign of disapproval of him personally.

Amid sinking poll numbers, Trump on Monday reversed course on his anti-mask rhetoric to declare the wearing of masks "patriotic" Twitter. One day later, he publicly acknowledged in his first White House coronavirus briefing in months that masks "have an impact." At the same time, the president has refused to wear one in public on all but one occasion or issue an executive order to mandate their use.

Retired Army Brig. General Don Bolduc, who is running in the Republican primary against businessman Corky Messner, himself a climate science denier who has stoked doubts about coronavirus vaccines, echoed Trump's comments in an interview with New Hampshire Public Radio last week.

Bolduc was pressed on whether issues such as littering "outweigh the scientific benefits" which have been widely discussed by medical experts like Dr. Anthony Fauci, the director of the National Institute of Allergy and Infectious Diseases.

"Listen, I'd never get into a scientific argument with Dr. Fauci," Bolduc replied. "But I listen to other people outside of Dr. Fauci."

Bolduc argued that masks should be used in a "proper setting, like hospitals."

"But outside of hospitals, I believe that they're ineffective," he said, citing no evidence. "They're not made of the right material in many cases. They don't breathe adequately there."

A study published on the National Institutes of Health website found that the universal use of face masks are effective in preventing the transmission of the coronavirus, even if the masks are made of simple cloth. A study published in the Journal of American Medical Association and circulated by the Centers for Disease Control and Prevention showed that "cloth face coverings are a critical tool in the fight against COVID-19."

"Cloth face coverings are one of the most powerful weapons we have to slow and stop the spread of the virus – particularly when used universally within a community setting," CDC Director Robert Redfield said in a statement last week. "All Americans have a responsibility to protect themselves, their families and their communities."

Though masks are primarily recommended to prevent the spread of the virus to others, studies have also shown that they provide some protection against the virus to the wearer. A study by researchers at University of California - Davis found that face coverings reduce the risk of infection by about 65%. Masks have also been shown to reduce the severity of infection.

Bolduc's campaign did not respond to questions from Salon. Messner said in a statement that masks have been effective in combatting the spread, but he does "not support a statewide mask requirement."

"Granite Staters have done an amazing job during this pandemic, demonstrating their willingness to voluntarily observe safe distancing, and when needed, use masks," Messner said. "Our decreasing infection rate is evidence their efforts have been very effective in containing the spread of the virus here in New Hampshire."

It is not the first time Bolduc has cited his own personal opinion to argue against public safety and science. Doctors called Bolduc out last month after he appeared to echo a widely-debunked conspiracy theory, also repeated by the right-wing commentators Diamond & Silk, that Microsoft founder Bill Gates wants to implant people with microchips via a coronavirus vaccine.

"This is Bill Gates saying we should put chips inside people now," Bolduc said during an event in May. "That's a dangerous violation of my constitutional right."

"The only bracelets anyone is going to put on me are handcuffs, because I'm fighting for my individual rights, my constitutional rights," he said at the time. "And the only chip that's going in me is a Dorito."

There is, obviously, no evidence that Gates wants to use a coronavirus vaccine, different versions of which are being developed by companies around the world, to implant microchips into anyone.

"I've never been involved any sort of microchip-type thing," Gates told reporters last month. "It's almost hard to deny this stuff, because it's so stupid or strange."

Bolduc said in a statement to NHPR that he was "not opposed to vaccinations" but opposed "increasing reliance on government to tell us what's best for us."

"Where there is risk, there must be choice," he said. "We need to inform and educate parents about the benefits, and if warranted, the side effects of any medication. This is about empowering people to make good decisions."

Messner has also raised questions over the efficacy and safety of any potential coronavirus vaccine.

"Like all Americans, I look forward to the discovery of a safe, effective coronavirus vaccine," Messner said in a statement to Salon. "And like flu vaccines, it is up to individuals, in consultation with their doctors, to determine whether or not to be vaccinated."

Bolduc has also echoed Trump's baseless conspiracy theory that the coronavirus may have been engineered in a lab in Wuhan, China.

"They (China) started this shit and they weren't transparent about it," Bolduc said in a March interview. "And they probably created it in a lab. And now we're stuck with it. And the whole world is stuck with it."

He later doubled down in an interview with local news outlet WMUR, arguing that the virus was "probably a biological program they put together and it got beyond their ability to contain" and that it was designed to have a "a fatal effect on our older generation."

The State Department recently released an internal cable that sparked speculation by the likes of Trump that the virus was created in a Wuhan lab in response to a lawsuit from The Washington Post. The cable showed no evidence to support the idea that the virus was released "deliberately or inadvertently," the outlet reported.

"There are lots of data and lots of evidence, as well as previous examples of this coming from nature," Kristian Anderson, a professor of immunology and microbiology at Scripps Research Institute who studied the origins of the virus said. "We have exactly zero evidence or data of this having any connection to a lab."

A group of doctors led by state Rep. Dr. Gary Wood, a Democrat, called on both candidates last month to stop pushing "harmful conspiracy theories that could undermine the public health response to the COVID-19 pandemic."

The letter noted that Bolduc has also "claimed, without evidence, [vaccines] could somehow harm children."

"While there is no vaccine yet, we know that widespread vaccination — meaning 60 to 80 percent of the world — would be necessary to achieve herd immunity and allow us to safely resume daily life without fear of contagion," the doctors wrote. "With candidates like you two fear-mongering about vaccines and spreading false conspiracy theories, widespread vaccination in our communities becomes much less likely, endangering our most at-risk populations."