Save lives — or obsess about Trump's tone? Political reporters just can't get it right

There was actual news in Trump's return to the briefing room: Put on a mask! Most reporters skipped right over that 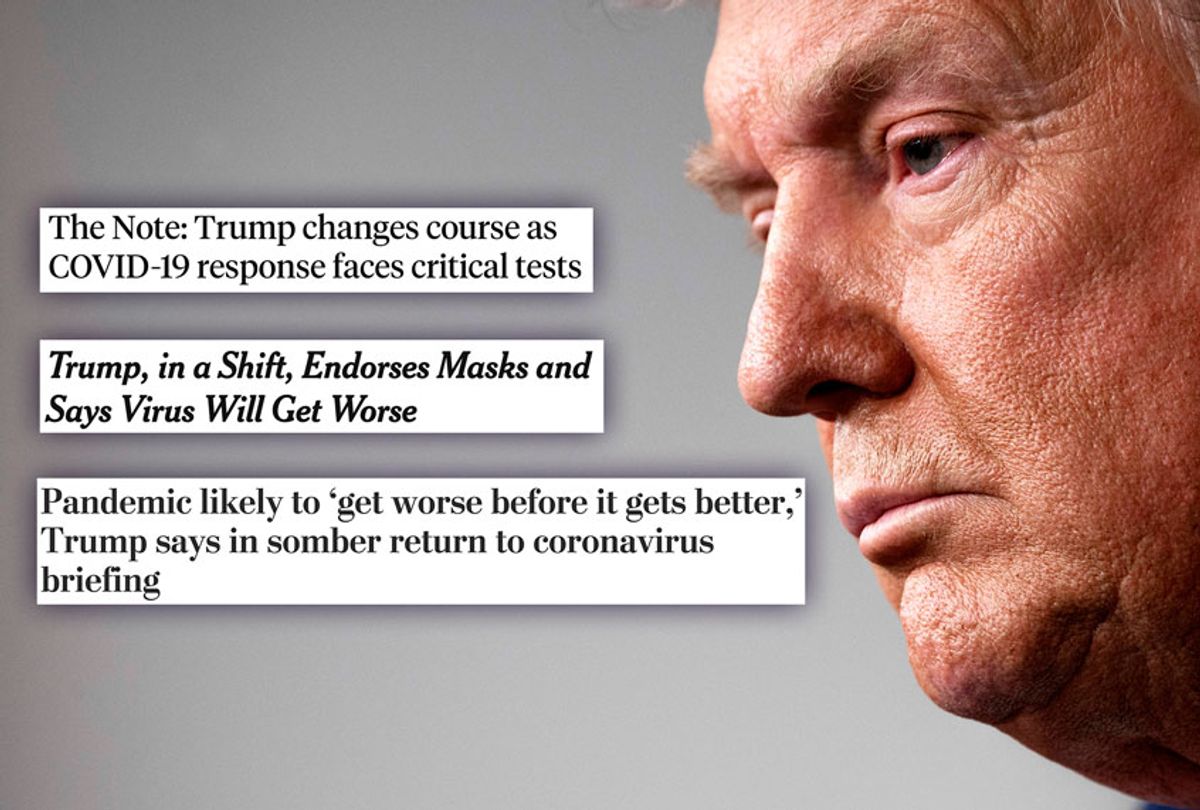 "TRUMP tells everyone to wear a mask: 'Whether you like it or not.'"

That should have been the big headline, coming out of Tuesday's return of the Trump Show.

Donald Trump actually did something great, for once: He told his followers in no uncertain terms to cut it out and put on their masks.

"We're asking everybody that when you are not able to socially distance, wear a mask, get a mask," he said, reading from his prepared text. "Whether you like the mask or not, they have an impact. They'll have an effect. And we need everything we can get."

Granted, Trump had in the interim ignored, undermined and mocked the idea of mask-wearing, inspiring his dead-enders to reject them as a symbol of liberal tyranny.

Granted, he still doesn't seem to be taking his own advice.

And granted, he's still not doing any of the other, much harder things that he — and only he — can do to marshal the nation's resources to fight the pandemic effectively, rather than let it run amok.

But what he did on Tuesday could save countless lives, especially if it's sufficiently broadcast.

That's big news. — and, frankly, when Trump does something right, the media should encourage him.

Instead, the preponderance of the mainstream coverage of Tuesday's "news conference" involved carefully assessing a possible "shift in tone."

"The Daily Show" rounded up some of the worst examples from broadcast media.

The headline Trump quote in these stories was not about masks, but about his scripted statement that the pandemic will "get worse before it gets better."

Here's the thing, though: There is no real news value in what Trump's tone is like, or what his predictions are, or what he's finally willing or not willing to acknowledge, or for how long.

None of that has any practical effect on anything.

What matters is whether Trump is going to do what experts have been telling him needs to be done for four-plus months now: Institute a robust national testing plan that includes massive supply-chain management, support and guide a national contact-tracing initiative, and forcefully request that people wear masks.

There is still no sign whatsoever that he's going to do either of the first two things, which are absolutely essential. Reporters should be holding him accountable for that calamitous failure, every day and at the top of their lungs.

But at least here, finally, he did the third one.

Why such a skewed and misbegotten focus from the elite press?

One big reason is that the wrong people are covering this story. Political reporters and editors should be entirely out of the loop on pandemic-related coverage. It's too important to be covered through their warped optics. Good health and science reporters make it their life's work to cut through bullshit claims, determine who's right and who's wrong, and tell readers what they need to know. That's what's entirely missing here, and they should be the ones in charge of all the related coverage.

Political reporters have other priorities. And for those in the rarefied White House press corps, one of the top priorities is to continually justify their own value. That means treating Trump as someone who is endlessly fascinating, potentially teachable, and enormously consequential — rather than describing him as a predictably venal, incoherent and unchanging narcissist.

I loved how attorney Daniel Nazer put it in a tweet on Tuesday, responding to my outrage over an ABC News analysis — which actually preceded Trump's briefing! – that described the president's "new tone and a new level of engagement."

Another attorney, Rajat Soni, also nailed it on Wednesday:

So did media figure and critic Soledad O'Brien:

To its credit, the Trump campaign itself was one of the few places to give Trump's mask comments the headline status they deserved, in this video:

But the people who needed to hear Trump's new message the most were the low-information voters — the ones who only read headlines, watch the network news, or heed Fox News and other right-wing outlets.

Reporters and editors in mainstream and right-wing media had a chance to take the high road and make a positive difference on Tuesday, by stating loud and clear that Donald Trump himself wants you to put on your mask, dammit. And they failed.