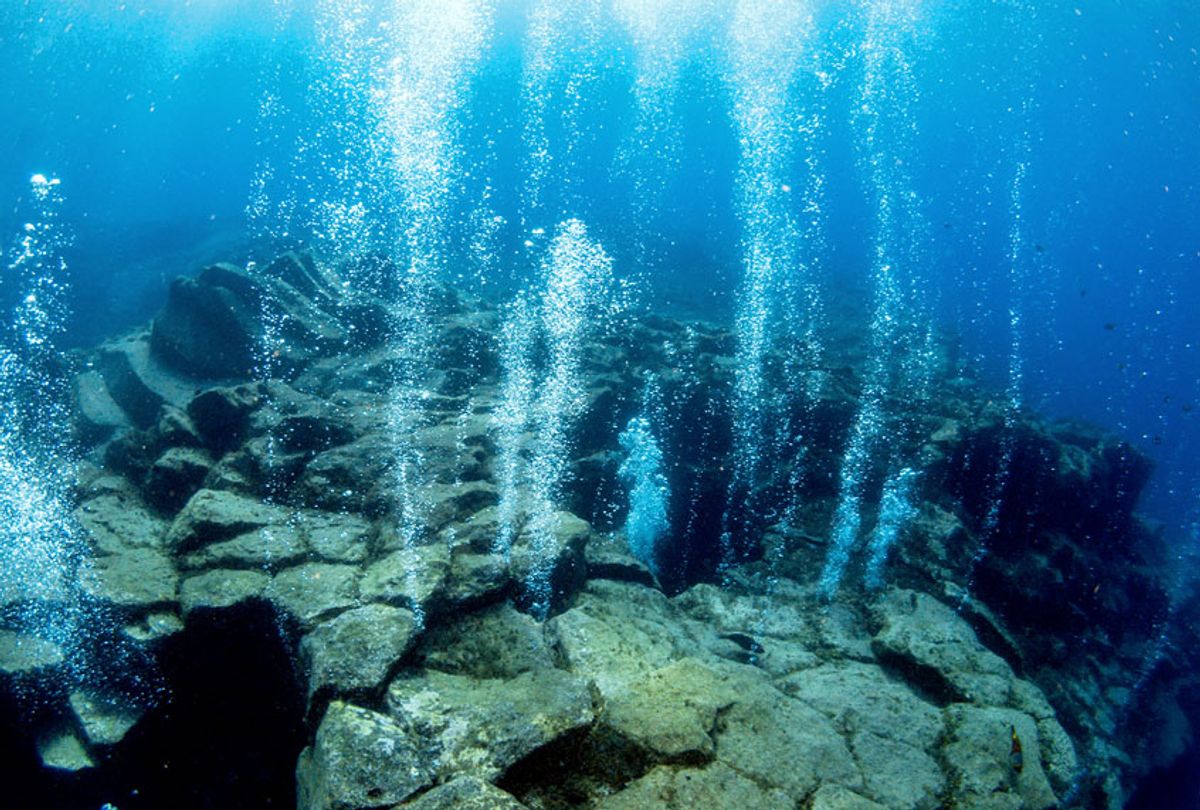 Gas bubbling up from the ocean floor (Getty Images)
--

Deep underwater in the Ross Sea off the coast of Antarctica, scientists have discovered a new active leak of methane, a greenhouse gas far more potent than carbon dioxide. The discovery marked the first time that scientists were able to directly observe a new underwater methane seep, and see how methane-eating microbial life in its proximity evolved over a five-year span.

In a study published in the peer-reviewed Proceedings of the Royal Society B, a research team led by Oregon State University oceanographer Dr. Andrew Thurber explained that the methane gas leak was first discovered in 2011 off Antarctic shores. Antarctica is believed to have as much as a quarter of the planet's ocean-based methane trapped in permafrost and on the continental shelves.

Just as micro-organisms like fungi breed like crazy in the presence of a food source in our homes — say, an open soda can or jam jar left out in the open — methane-eating microbes are present in small numbers spread throughout Earth's oceans, and only multiply precipitously when they find a prominent "food" source like a methane seep. Indeed, the scientists note that by 2016, methane-consuming micro-organisms began appearing by the leak and consuming a small portion of the gas, though not enough to offset the methane venting.

In the case of this Ross Sea methane seep, researchers sought to quantify the "response rate" of the microbial community over time — in other words, how fast these microbes took up residence around the seep, and how much methane they took in before it could reach the atmosphere. Five years after the seep's formation, researchers noted that the microbial mat "had not yet formed a sufficient filter to mitigate the release of methane from the sediment."

The discovery is particularly interesting in that the chronology of these kinds of phenomena is not well-understood; prior to this paper, it was unknown how long microbial life would take to filter methane in a similar methane seep. The researchers said that five years after the seep's forming, the microbes were still in an "early successional stage."

"This study provides the first report of the evolution of a seep system from a non-seep environment, and reveals that the rate of microbial succession may have an unrealized impact on greenhouse gas emission from marine methane reservoirs," they wrote.

The presence of methane increases the amount of heat trapped in the atmosphere. From a warming perspective, it is preferably that microbes consume the methane first and produce carbon dioxide — which is still a greenhouse gas, though not nearly as potent as methane, which absorbs 25 times more heat in the atmosphere compared to carbon dioxide.

"Our results suggest that the accuracy of future global climate models may be improved by considering the time it will take for microbial communities to respond to novel methane input," the authors write.

Salon reached out to a pair of climatologists for their thoughts on the study. The common observation, which was made in the study itself, is that the methane leak itself did not appear to have occurred strictly because of global warming, though that is a scenario that scientists are actively concerned about.

"This study really just demonstrates a potential pathway by which Antarctic marine methane can escape to the atmosphere," Dr. Michael E. Mann, a distinguished professor of atmospheric science at Penn State University, told Salon by email. "It doesn't demonstrate that climate change has lead to any increase in methane emissions. Relevant to this latter point is a study that just came out a week showing that methane increases in the atmosphere are due to natural gas extraction ('fracking') and livestock methane emissions. There is no evidence that 'methane feedbacks' are contributing to rising methane, at least not presently."

"Methane concentrations in the atmosphere have increased prominently in the past few years, and a significant source is from leaky fracking installations and the resulting fugitive emissions," Trenberth explained. After reviewing the economics of fracking during the coronavirus pandemic — and in particular how some of the industry has gone bust — Trenberth responded to the paper by writing that it "illuminates largely natural processes in the southern ocean. Carbon of various sorts (wood, sea weed, etc) decays and forms either carbon dioxide (if aerobic) or methane (if anaerobic and immersed in water). Certain different kinds of bacteria flourish under both conditions. My understanding is that a lot of methane from depth in the ocean is absorbed rather than emitted into the atmosphere. That would be a key question."

He added, "What surprises me about this article is that the southern oceans are far from friendly to work in. There are strong winds and huge waves, and how they can even accomplish this work would be of interest. . . .  Are their results biased as a result? In any case, evidently rich and new biogeochemistry has been discovered and can only help understanding and modeling."