Alexandria Ocasio-Cortez gave a riveting House speech Thursday. To Times reporters, it was a branding exercise 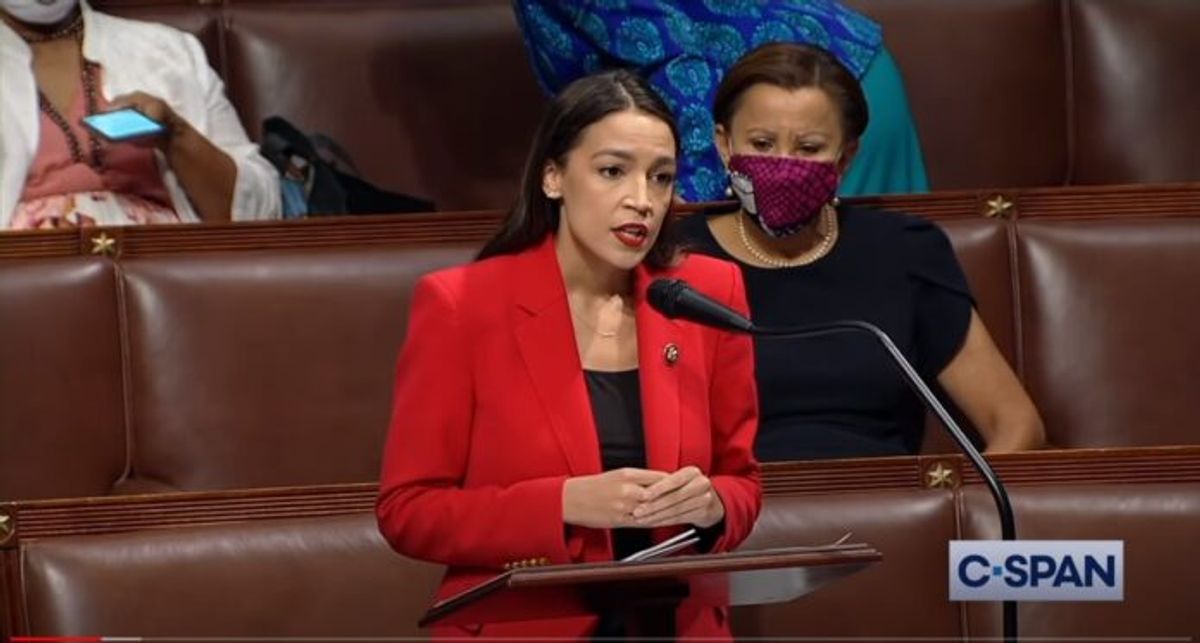 Rep. Alexandria Ocasio-Cortez makes some people very uncomfortable, and apparently that includes some editors and reporters at the New York Times.

So rather than report on Ocasio-Cortez's riveting, viral speech on the House floor on Thursday aas a signal moment in the fight against abusive sexism, Times congressional reporters Luke Broadwater and Catie Edmondson filed a story full of sexist double standards and embraced the framing of her critics by casting her as a rule-breaker trying to "amplify her brand."

First things first: If you haven't watched and heard her remarks yet, do so now. (There's a transcript here.)

Then consider that the Times described the speech as "her most norm-shattering moment yet," leading with the fact that "she took to the House floor to read into the Congressional Record a sexist vulgarity that Representative Ted Yoho, a Florida Republican, had used to refer to her."

Washington Post reporters John Wagner and Paul Kane, by contrast, led their story by describing how "House Democrats rallied around a high-profile congresswoman Thursday in an extraordinary denunciation of sexism."

A critical "tell" in the Times coverage — something perhaps only fellow journalists would fully appreciate at first — was that the paper had previously avoided directly quoting Yoho's particular words, but did so now:

"In front of reporters, Representative Yoho called me, and I quote: 'A fucking bitch,'" she said, punching each syllable in the vulgarity.

Author, cultural critic (and close friend) Mark Harris was quick to call the Times out:

In the first Times article on the matter, on Tuesday, Broadwater described Yoho's words as "a pair of expletives" — noting that Ocasio-Cortez had "sought to turn the insult to her advantage."

In his second article, on Wednesday, he referred to it as "a vulgar and sexist expletive."

Now, all of a sudden, the Times was printing the words "fucking bitch."

James Fallows, the renowned Atlantic national correspondent, asked in a tweet: "WHY should these words appear in a quote from AOC, at whom they were hatefully directed, rather than one from Rep. Yoho, who actually said them?"

The Times reporters wrote that after her speech, "Ms. Ocasio-Cortez, who excels at using her detractors to amplify her own political brand, invited a group of Democratic women in the House to come forward to express solidarity with her."

Only then did the Times acknowledge the actual significance of the occasion:

More even than the profanity uttered on the House floor, where language is carefully regulated, what unfolded over the next hour was a remarkable moment of cultural upheaval on Capitol Hill.

But then it was back to ascribing mercenary motivations, describing how "the media-savvy Ms. Ocasio-Cortez had sprung into action to create a disruptive and viral event."

Who edited this story? There's no way to know. But the fact that the Times printed the word "fucking" means it must have got to the very top of the food chain.

Hamza Shaban, a business reporter for the Washington Post, called attention to the similarities between the Times's framing of the story and the story's own description, toward the end, of how Republicans have demonized Ocasio-Cortez.

The fundamental problem with the story, as Shaban noted, was that it cast Ocasio-Cortez as the violator of norms, rather than questioning the norms she was denouncing so eloquently.

As British educator Sinéad Fitzsimons put it in a tweet: "'…her most norm-shattering moment…' is standing up against abusive #sexism ? What exactly is the norm then?"

Science fiction author Sarah Pinsker noted the double standard, tweeting: "The NYT is doing exactly what AOC complained about in that speech, shaming her as if she somehow did something wrong in repeating the words he used against her."

In fact, the double standards were everywhere. New York magazine writer Rebecca Traister, responding to Harris' tweet, noted: "Women's anger at male power abuse [is] regularly presented as path to self-advancement for the women. Voicing fury at systemic degradation is read as opportunistic. Whereas men's abusive behavior rarely understood as fundamental to how they attained & maintain THEIR power. But it is!"

David Remnick's appreciation of Ocasio-Cortez's remarks serves as an antidote of sorts to the Times story. Writing for the New Yorker, he gave her credit for her achievements:

Ocasio-Cortez has been at the forefront of major issues, including climate change, immigration, campaign-finance reform, and income inequality. Her ability to skewer a balky witness in committee hearings has proved as uncanny as it is entertaining.

In a speech that "should be studied for its measured cadence, its artful construction, and its refusal of ugliness," Ocasio-Cortez "defended not only herself; she defended principle and countless women," Remnick wrote.

And he clearly identified the real norm-killer:

The politics of our moment are dominated by a bully of miserable character, a President who has failed to contain a pandemic through sheer indifference, who has fabricated a reëlection campaign based on bigotry and the deliberate inflammation of division. His language is abusive, his attitude toward women disdainful.

In the Washington Post, Monica Hesse wrote that "On the subject of misogyny at least, her Thursday address was the speech of a lifetime."

Ocasio-Cortez is an extraordinary political figure: a smart, brave, charismatic young Latina woman who refuses to be intimidated by anything or anyone.

Her very existence in Congress, along with her insistent, progressive agenda, her bold words and actions, and the ease with which she navigates pop culture and social media, have turned her into an icon — a singular walking, talking challenge to the conservative white male power structure.

As such, she tends to bring out the worst in some people.

On Thursday, she brought out the worst in the New York Times.