Chicano food A to Z: Cookbook author Esteban Castillo on tacos, margaritas and everything in between 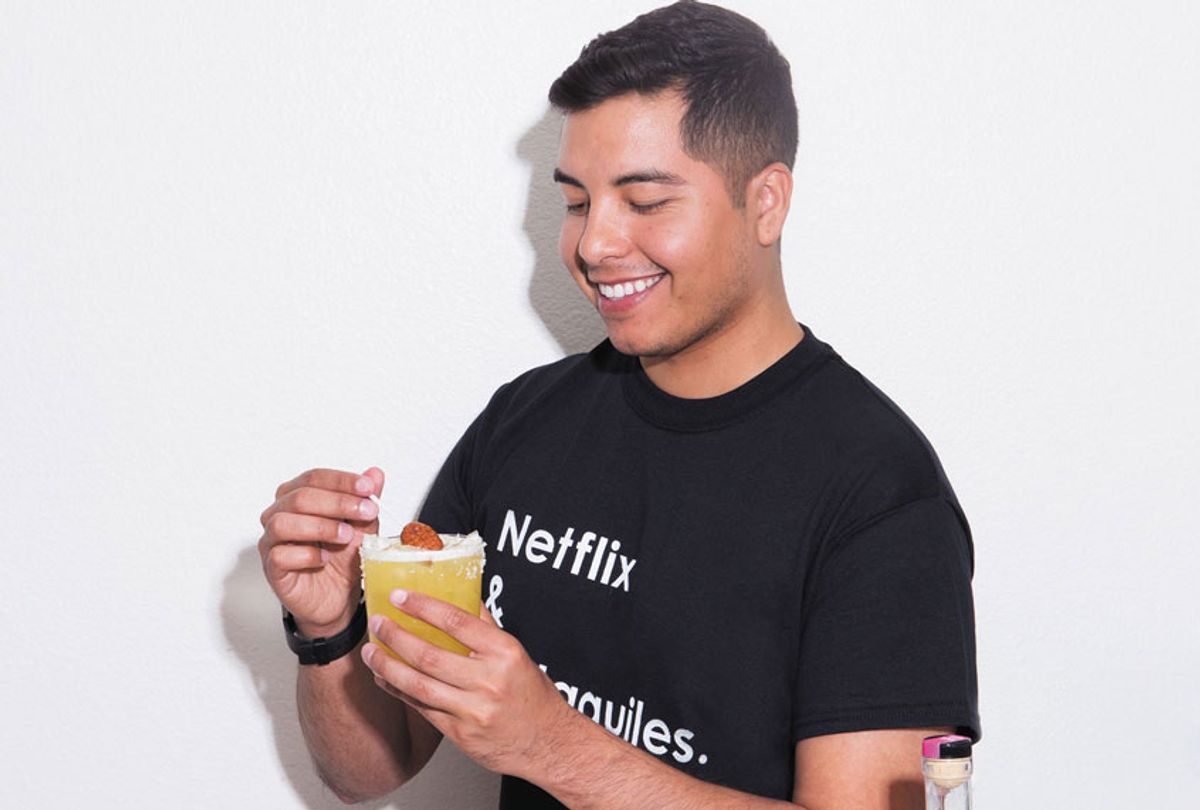 This is part two of a two-part interview with Esteban Castillo.

"Chicano Eats" is one of the most colorful and joyous celebrations of food I have ever read. That being said, I wept as I turned the pages of Esteban Castillo's debut cookbook. I wish this Mexican American boy from Alabama would have had this important work to read as a child. Like Castillo, I grew up watching every move my abuela made in the kitchen. His recipes connect me to my culture.

After Castillo and I had a candid conversation about the politics of food in the first part of our interview, we turned to the delicious recipes from his vibrant cookbook: cocktails made of mezcal and tequila, our favorite types of tacos and how to braise ribs in michelada sauce. While you can sink your teeth into these recipes any time of the year, they're perfect for the time when you can fire up a grill and pour an ice-cold drink while you wait for it to heat up.

Contained below are lots of tips and tricks for flavors to consider when making Mexican-inspired food at home. Catch up on part one of my two-part interview with Castillo here. Then enjoy the rest of our conversation below.

What's the perfect margarita to you? Do you have any tips or secrets?

Definitely a lot of lime juice, because I like my drinks really tart, but also a really good tequila — and lots of it. Basically, all of the drinks in the drinks chapter can be made into a cocktail.

It's funny, because the different times that I've talked about the book on my Instagram, a lot of people have been really excited for the cocktail chapter, specifically. I don't know what that says about our generation, but there are a lot of really good cocktails in it. There's one in specific in there that's inspired by one of my favorite TV shows.

RELATED: Serve these crunchy potato tacos from Esteban Castillo with a big pile of lettuce and queso Cotija

Well, I love the "Real Housewives" — all of them, all of the franchises — and specifically Orange County, because that's where I grew up. They always seem to have a spicy margarita. I don't know why, but that's what they always ask for. So I decided, "Hey, let me make my own spicy margarita, so that I can have it while I'm watching the show."

It's a watermelon margarita. It's got a little bit of lime juice, triple sec and tequila. But it also has the simple syrup made from toasted chilies de arbol. So it's got a little fruity, spicy kick to it. It's really nice.

Watermelon is perfect for summer. My go to drink nowadays is mezcal, and I hear that you're a fan, too. Do you have some mezcal recipes in the book, as well?

Do I? Yes, I do. I have my dad's cuba. He doesn't drink, but whenever we have parties, he's our go-to bartender (which is kind of weird to think about, because he doesn't drink). It's almost like a take on the paloma. There's grape fruit juice and lime juice. There's pineapple juice, there's tequila and there's mezcal.

If you haven't had mezcal before, it's actually the spirit of choice for Mexico. It's not tequila. It's similar to tequila, where it's made from agave, but it's just smokier. And I feel like it's just so much more flavorful and a lot more complex.

RELATED: This recipe combines mac and cheese and queso fundido into one dish with so many layers of flavor

One thing I wanted I thought about while I was reading your bookis the idea of comfort food. While everyone's been caught indoors during quarantine, the the return to comfort has been heralded. As I was telling you earlier, my roommate here is from Monterrey, Mexico. And he told me, I just really want some caldo tlalpeño. I made that, and that to us is comfort food. But when I was looking at comfort food recipes that blogs and publications were re-visiting during the pandemic, it was all meatloaf, macaroni and cheese, what have you.

RELATED: Purchase a copy of "Chicano Eats: Recipes From My Mexican-American Kitchen"

It's funny, because I still don't feel like my parents completely understand what I do. Even when I was in college and I was explaining to them that I was going into public relations, they didn't know what that was.

My mom follows me on Instagram, and she thinks that I just post pretty pictures of food and that I love to cook. But I feel like the American dream is . . . I don't know. That's a hard one for me to answer, because I feel like it's kind of like a moving goal. I still have so many more things that I want to do before I can be able to say, "Hey, I've made it."

What are those things? How do you see your brand growing? Does it include possibly opening a location, for example?

I'd love to, honestly. That's something that I think about often. And if I have the funds — or if someone just wanted to get me a few million dollars — I'd love that. But I think in the next few years, I would like to start small, with some sort of food truck or some sort of pop-up.

I've done a few pop-ups here and there when I was living in Southern California, and that was really great. I loved getting to share my creations and getting to meet these people who have been following me and supporting my work. And I'd love to be able to do something where I can be continuously sharing things physically with them.

Also, I'd love to work on many more books. And, eventually, I feel like once I get to this goal, which would be to have my own show, then I feel like I would be able to say that I've achieved my American dream.

What was the process of writing your first cookbook like? It's a lot of work.

It's a lot. I knew it was going to be a lot, but I didn't realize that it was going to be even more than that. It took me about a year to work on a proposal. And then after finishing up the proposal, I went to New York, where I shopped the book around to the different publishers.

I landed with Harper Collins, which has been more than amazing. I was able to work with a Latina editor who had previously lived in Mexico. So that was really great to my experience, because she was able to really get a lot of those little bits and pieces that someone else wouldn't have been able to. She also understood my Spanglish a lot. She understood what I meant.

After securing the book deal with them, it took me almost two years to finish the book. I shot the book once, and I turned it in. And then I had a few months where I was just working on edits and stuff. And then I was like, "You know what? I think my photos could be even better." So I ended up shooting the book twice, and that's just me being a perfectionist and always having that impossible standard.

You talked about your abuelo's tacos, and I know there's a recipe for those in the book. Do you have a favorite taco? What's your favorite taco overall?

It would have to be able to mi abuelito's tacos de adobada, which are these pork tacos similar to al pastor, where it's pork marinated in an adobdo. That sits overnight. How do I explain it to you? It's super fruity. It's a little acidic from the vinegar. And every time I smell those tacos, it just instantly takes me back to sitting next to mi abuelito. I guess I just hear that piece of pork just sizzling on the griddle and it just . . . I don't know . . . It just brings me back to being a kid. And for me, those are my favorite tacos.

What is your favorite thing to grill?

One of my favorite recipes in the book was the ribs, which have a michelada sauce. Right?

Can you tell us about how you combined a favorite drink and ribs together?

After moving down to Southern California from college, I was able to visit my parents often. And whenever we had some sort of celebration, they always loved going to a barbecue joint.

We would go, and everything would be kind of dry. The ribs would have not a ton of meat. So I had my own place, and I was like, "Hey dad, why can't I just . . . Give me a chance. Let me do this, and we could totally make all of this dinner for half of the price or even a third of the price."

So I started making these ribs. I was living in an apartment at the time, so I started braising them in the oven. The braising liquid is a combination of the flavors that you find in the michelada, which is beer, a little bit of soy sauce, a little bit of steak sauce and then some steak seasoning in there.

You just leave them in the oven for about three hours — until the meat literally just falls apart — and then you finish them in the broiler. And it was one of those really neat recipes to be able to have in my Rolodex, because when I was living in an apartment, I didn't always have an access to a grill. So, I kind of had to get creative with what I had on hand, and the ribs are perfect.

To go back to what we were talking about before, Mexican food is so regional. A michelada in the Yucatan doesn't have the hot sauce in it. It's just really the salt and the lime juice. So, the first time I saw a michelada that was like the one you're describing, it was a very different experience for me.

We were in Cancun for a trip. I remember asking for a michelada, and I got that. And then I was like, "No, but I want a red beer." They were like, "Oh, this is called an ojo rojo."

The food in the Yucatan is very much based around acid, because you have the sour orange, in addition to lemons and limes, which plays so much of a role there. Do you have a favorite recipe in the book? That's probably a hard question.

It is — honestly, it's such a hard question. But if there's anything that I could eat for the rest of my life every day, it would be sopes, which is one of the recipes from the book. It's these fat little masa discs that are fried until they're golden brown.

They're a little bit different than how the rest of Mexico makes them. In Colima, they're very thin, and they're top with ground beef or lomo, which is like a pork loin. And they're topped with this consomme — that's like tomato broth. And then it's got like shredded lettuce, queso fresco, tomato and hot sauce. It's one of my favorite things. It's one of those things that my mom used to make for birthdays, so I really love that.

Click here to purchase a copy of "Chicano Eats: Recipes From My Mexican-American Kitchen."