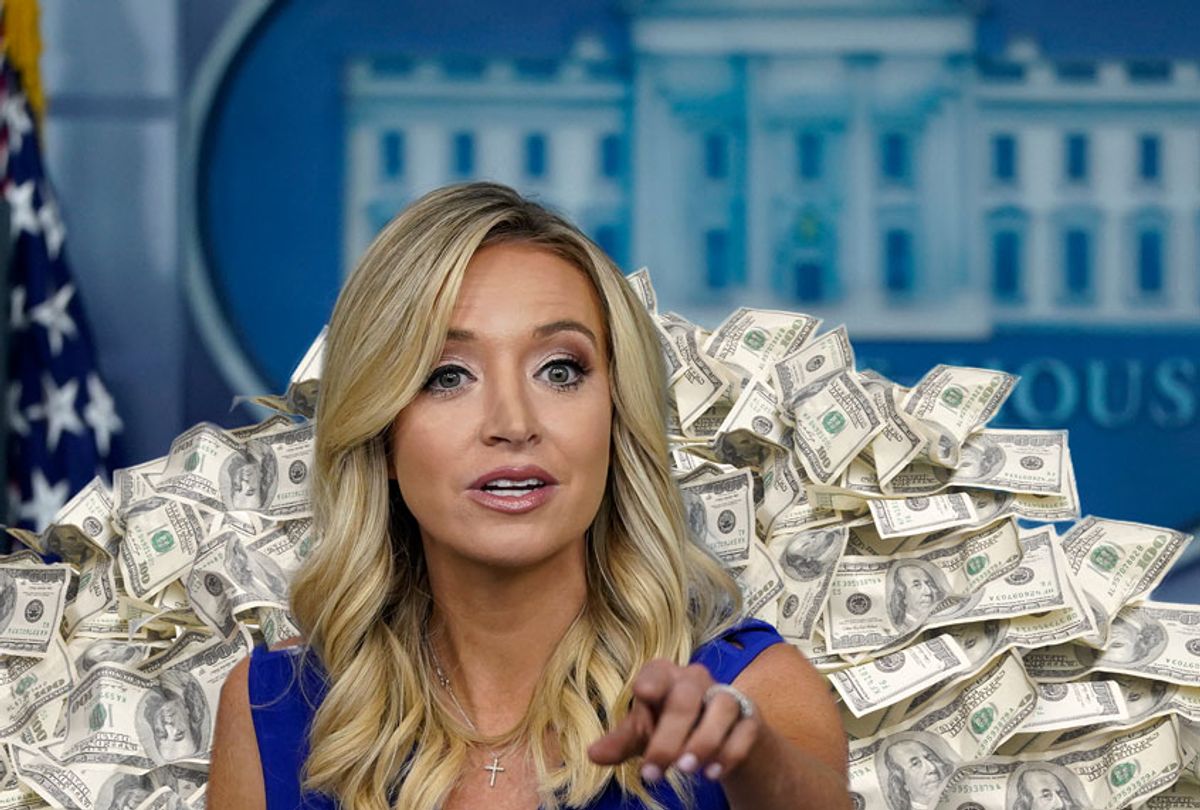 White House press secretary Kayleigh McEnany received $12,000 in payroll payments from the Trump campaign after her official appointment to a position in the Trump administration, as federal election filings examined by Salon show. That would be a clear ethical breach, and could indicate violations of the laws governing campaign finance and payments to political appointees.

The campaign reported the payments on April 16 and May 1, in the amount of McEnany's regular $6,000 biweekly salary, and filed the disbursements as "payroll" expenses. Another filing, viewable here, shows the campaign reimbursed McEnany for $524.57 in travel expenses on May 26.

Prior to joining the administration, McEnany served as spokeswoman for the Trump campaign. The White House released a statement officially naming McEnany as its press secretary on April 8. Though she did not give her first official briefing until May 1, she had already released official statements and spoken on behalf of the White House in media interviews. McEnany confirmed to Salon in a phone interview that April 13 was her official start date at the White House.

"The campaign overpaid me, and I immediately paid them back," McEnany said, claiming that "every penny has been paid back in the overlap."

Trump's press secretary added that the reimbursement was for "travel for a rally" when she "had been unable to get a bill from the Hilton, which they provided many months after because of COVID timing."

McEnany did not provide evidence of this, or point Salon to any government or campaign records that could substantiate her claims. Following the call with McEnany, a White House press officer sent Salon an off-the-record email. When Salon requested further information on the record. McEnany then emailed a statement about what she characterized as a "mistaken payment."

Salon asked McEnany to provide evidence to support her claims, but did not receive an answer. Neither McEnany, the Trump campaign nor the White House has yet provided evidence that she "immediately" repaid the campaign.

When shown the filing, a senior FEC official directed Salon's questions to the campaign.

Trump campaign spokesperson Tim Murtaugh told Salon in a phone call that he would only begin to discuss the payments in an off-the-record conversation. Salon did not agree to this and Murtaugh later emailed the following statement:

There was a clerical error in the recording of Kayleigh McEnany's termination date when she left the campaign and as a result continued being paid by our payroll provider. Kayleigh immediately notified the campaign of the error. She has reimbursed the payroll company for the full amount she was mistakenly paid. Kayleigh handled everything properly.

The campaign did not provide any evidence of this repayment. FEC records show the payment came to McEnany directly from the Trump campaign, not from a payroll company. Neither Salon nor campaign finance experts could find evidence of any reimbursement in FEC filings.

"If she really gave the money back so quickly in May, before the FEC report was filed in June, the campaign probably never would have reported that payment in the first place," said Kedric Payne, general counsel and senior director of ethics at the Campaign Legal Center, in a phone interview.

"But if she did pay the campaign back, and they did report it like they're required to do, then that reimbursement should be in the FEC filings," Payne continued. "I'll give them the benefit of the doubt to explain where it is, or show it later if there was some filing mistake, but it's not clear from what I see in the campaign's filings that there was any reimbursement received for these payments."

"There are, however, laws about federal employees which limit outside income," she added, citing 18 U.S.C. § 209 — "Salary of Government officials and employees payable only by United States" —which reads:

That law makes an exception for "special government employees," as well as "employees serving without compensation." Such examples include former ambassador Kurt Volker, who served the Trump administration as an unpaid "special envoy" to Ukraine while drawing his full salary as an executive at the lobbying firm BGR.

McEnany has never said she was working for the White House for free.

"Since these are officially 'payroll' payments, and not individually itemized services, it appears she was a salaried employee while also working in her official administration capacity," Virginia Canter, chief ethics counsel for the government watchdog CREW, told Salon. "If she was on salary while also drawing White House pay, then she might be subject to criminal statutes and other conflicts of interests, such as unlawfully supplementing government income."

Jerry Goldfeder, an election and campaign finance expert at Stroock LLP, was blunt.

"Not permissible," he told Salon. "A federal employee cannot simultaneously be an employee or consultant of a campaign."

"18 U.S.C. Section 209 says you can't pay somebody from a third party to do government services," added Payne of the Campaign Legal Center. "But there's also a section in the Code of Federal Regulations barring payments to political appointees."

That code points to Executive Order 12674, which reads in part: "No employee who is appointed by the President to a full-time noncareer position in the executive branch ... shall receive any earned income for any outside employment or activity performed during that Presidential appointment."

"The White House and the campaign need to provide evidence to explain what was going on here, and we need accountability if there was a conflict," Payne said. "But I don't at all put it beyond this White House to try to talk itself out of this."

"It would be much cleaner not to be joining the White House from an active campaign with monies owed by the campaign to a White House employee," she said.

All three of McEnany's overlapping campaign payments were addressed to her at 725 Fifth Avenue in New York — the address of Trump Tower.

McEnany has apparently never lived at Trump Tower or listed it as an address, but the Trump campaign lists the building as one of its "headquarters" and reportedly keeps a skeleton staff there to justify paying an exorbitant rent. Ryann McEnany, Kayleigh's sister, also has her $2,538 biweekly campaign payments addressed to Trump Tower.

In 2018, McEnany's driver's license and car registration listed a residential address in Edgewater, New Jersey, just across the Hudson River from Manhattan. She cast a mail-in absentee ballot in Florida that year, which might have been a violation of election law.