Kayleigh McEnany, Mike Pence, and the narcissistic apocalypse of the new evangelicals 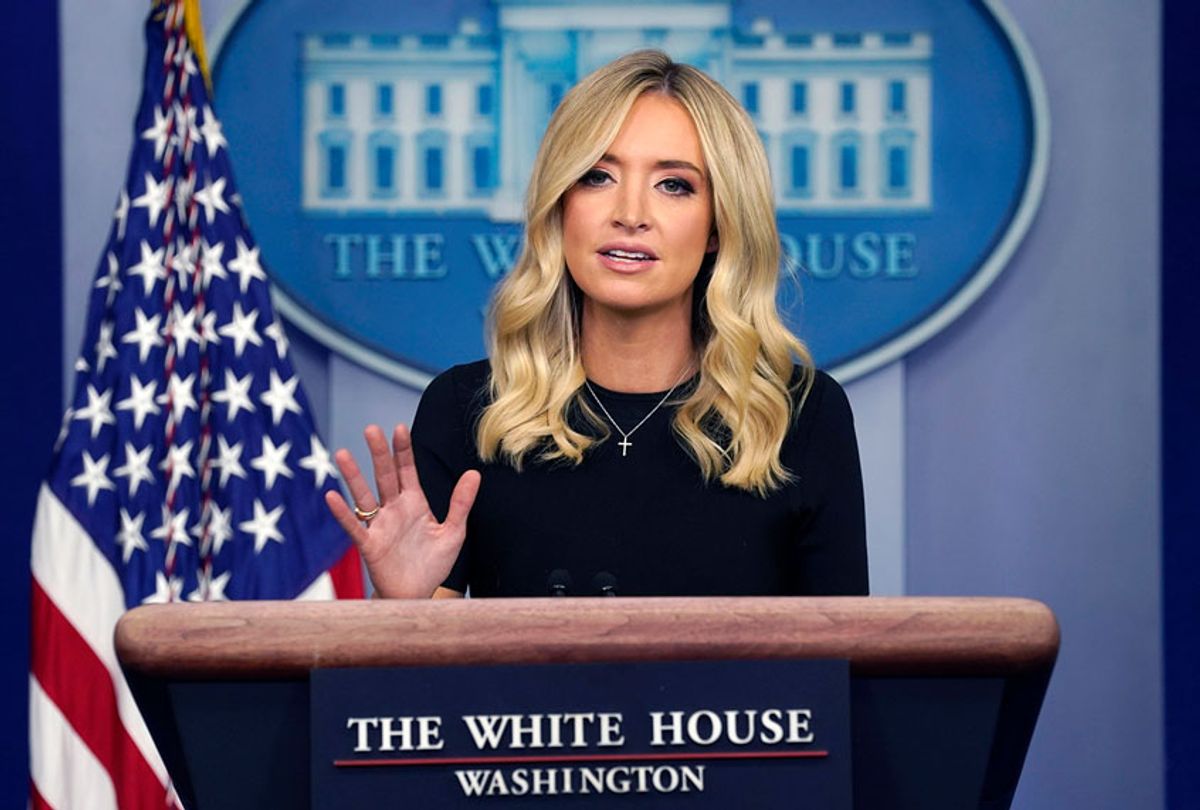 When Peter Manseau heard that a former student of his at Georgetown, Kayleigh McEnany, had been named the new White House press secretary, he felt compelled to write about it.

His article, published earlier this month in the New Republic, is a warning in all but name, a American religious historian's observations about the underpinnings of his former student's worldview — an analysis one could read as sacrificial or suicidal.

Manseau taught McEnany in an undergrad memoir-writing class — she was interning for President George W. Bush at the time — so his insight is perhaps unique among other professors.

"Friends who teach writing, as I once did, often relate the pride they feel seeing young women and men who sat in their classrooms launch careers as authors or journalists," he wrote.

"This spring I had a different experience: A former student became the most prominent storyteller in America, and now the future of the country seems to hang on the meaning of the stories she might tell," he continued.

Manseau places McEnany in the vein of conservative evangelicals whose embrace of Trump seemingly requires them to abandon core tenets of their faith. In McEnany, he writes, "a uniquely American strand of faith formed by ideas of religious persecution has found an opportunity for profound influence": Christian martyrdom.

If a representative of that strand was now speaking on behalf of the president of the United States, it had already sewn itself into the tapestry of the administration, in the figures of evangelical fundamentalists such as Vice President Mike Pence, Secretary of State Mike Pompeo and Energy Secretary Rick Perry.

Those officials are more commonly thought of as crusaders, as opposed to martyrs. But to evangelicals, martyrdom is an internalization of the crusader mentality — two sides, same violent coin.

Manseau's article, however, focuses on the martyrdom.

One of the most influential people in McEnany's life, Manseau says, is Rachel Joy Scott, the 17-year-old Christian who was the first victim at Columbine High School in 1999. As the story goes, Scott was shot four times; one of the shooters came up to her and asked if she believed in God; she said that she did; he shot her dead.

It is unclear whether this actually happened.

Rooted in fact or not, the myth riveted a generation of evangelical Christians McEnany's age, who carry Scott's martyrdom with them to this day — percolating up as recently as the 2016 movie "I Am Not Ashamed."

That generation saw in Scott's death "a template for how to respond to anything they regard as evil — which, in practice, can include not only actual violence but perceived attacks upon their beliefs," Manseau writes.

A line from Scott's journal — "I am a warrior for Christ" — became the "rallying cry" for young people who saw the world as "a story of faith held at gunpoint," Manseau writes.

McEnany has writtem about Scott frequently. Manseau cites a column quoting Scott, published in The Blaze to mark the 14th anniversary of the Columbine shootings.

As Congress tries relentlessly to squelch religious liberty and remove God from our public buildings, our schools, and our heritage, let's choose instead to honor the written word of Rachel Joy Scott this April 20th: "I am not going to apologize for speaking the Name of Jesus. I am not going to justify my faith to them, and I am not going to hide the light that God has put in me. If I have to sacrifice everything … I will."

Of course, another generation was already there.

The evangelical Christians who infamously carried  Trump to victory now surround him, insulate him, advise him and steer his policies.

There's Pence, Pompeo and Perry, but also outside advisers such as Jerry Falwell Jr. and Paula White, the firebrand Florida pastor who has known Trump since 2002 and once called for "all satanic pregnancies to miscarry."

"It's based completely around the idea of persecution and loss of power," said journalist and author Jared Yates Sexton, who has written two books on the subject, one of them forthcoming this September. Sexton was speaking of "dominionists," meaning those people "determined to create a theocratic state and burn everything down, and now they perceive themselves as truly having that power."

They're interested in reaffirming Christian control over America, embedding its tenets in laws, spreading evangelicalism through America's foreign policy, and hopefully creating a world order wherein a final apocalyptic battle can be fought or else Christ returns to rule the Kingdom of Heaven on Earth," Sexton said.

Trump, who in the scheme of things has never voluntarily attended church — except perhaps once, recently — most likely seeks out these people not for spiritual guidance, but to take the temperature of his most important voting bloc. (National Election Pool exit polls found that about 26% of 2016 voters identified as white evangelical Christians, a base Pence was picked specifically to deliver.)

However, that means Trump will often choose the path that makes them happy, even if it's not necessarily the path that he, given his druthers, would have chosen himself.

Countless pixels have been roasted with reports and columns about the ethical contortions and compromises of Trump's evangelical base, including the officials who carry out (and influence) his orders. But one could also easily view those compromises as sacrifices: a knowing, willful ideological spin on martyrdom.

In fact, McEnany offers an example. When former South Carolina Gov. Mark Sanford won a congressional seat despite having left his wife for another woman, McEnany excoriated both Sanford and the Christian voters who elevated him to national office.

"Do we expect perfect men and women to hold office? No. They don't exist," she wrote in a 2013 column for The Blaze. "But we owe it to ourselves to elect individuals who will treat the office — and by proxy their constituents — with the respect it deserves. We used to care about morals. Tuesday night showed morality has fallen by the wayside. For the sake of my party and my country, it's time to change course."

It's reasonable, Manseau says, to believe that McEnany's shift from vocal Trump critic to his official, salaried defender, was merely about a professional opportunity. She still serves on the board of Rachel's Challenge, after all, and "may also have seen in the self-proclaimed 'counter-puncher' someone who could provide protection to a generation shaped by fear."

Passages from McEnany's 2018 book, published more than a year into Trump's presidency, suggest Manseau's read is accurate. The martyrs she honors in this book were not killed in mass shootings, but by the familiar boogeymen that haunt the Trump campaign trail: terrorists, illegal immigrants, drug dealers, and a Veterans Administration gone to pot under President Barack Obama.

"Their hurt and their loss are reflective of the emotions that fueled a frustrated electorate," McEnany writes, in an effort to rationalize Trump's ascension in worldly terms, and an effort to make all judgments about his fundamental character, moral turpitude and everyday behavior seem petty and ignorant.

Even so, this all hinges on what by now seems an obsession with the ultimate value of death. One of the most fundamental elements of Christianity, of course, is that we are granted access to God and to eternal life thanks to a death — and a murder at that.

Death and religion have resonated throughout the coronavirus pandemic. Take, for instance, Trump's original insistence on open the economy by Easter, or Texas Lt. Gov. Dan Patrick — "a Christian first, a conservative second, and a Republican third" — saying more than once on national television that older Americans should be willing to sacrifice their lives so we can open the economy sooner.

Given the martyrdom theme, it seems well worth noting Patrick included himself in that group.

Or note the Florida megachurch pastor who was arrested for holding services for hundreds of people in defiance of the state's stay-home orders. Or Dave Daubenmire, a fundamentalist right-wing radio host who has spread the conspiracy theory on-air that COVID-19 is not actually a virus but a complication from radiation caused by 5G technology. Or televangelist Kenneth Copeland, who told millions of viewers that he had destroyed the virus because the power of the Lord worked through him.

Or Ralph Drollinger, who wrote that the coronavirus is the "consequential wrath of god," punishing America for its various moral depravations. Drollinger is a spiritual adviser to President Donald Trump.

This deathly denialism, which seems to resonate so well with the evangelical right, has been amplified by right-wing media personalities who also speak directly into the president's ear, such as Sean Hannity, Tucker Carlson and Laura Ingraham.

But senior evangelical administration officials such as Pompeo and Pence, who was chosen to head the White House coronavirus task force, don't take this view. Their martyrdom, it seems, is ideological: They support Trump despite his countless moral failings and spiritual vacuity, because they believe that sacrifice will open a gate to heaven.

Pompeo and Pence are both Christian Zionists, a strain of the faith whose support of Israel is largely predicated on an interpretation of the Book of Revelation that says the fall of the Jewish state is a prerequisite for the second coming of Jesus (and, incidentally, the death and banishment to hell of all Jews who do not accept him).

This is not a fringe belief: About 80% of evangelical Christians identify with Christian Zionism.

The Rev. John Hagee, a televangelist ally of Pence and Pompeo whose ministry reaches 6 million people, theorized in the early 2000s that this might happen via a war with Iran. (The pair were reportedly the top officials advocating that Trump kill Iranian Gen. Qassem Soleimani last January.)

In January 2018, Pence tweeted a video of himself and his wife Karen laying a wreath at the Yad Vashem Holocaust Memorial in Jerusalem. In the tweet Pence, honored what he called the "6 million Jewish martyrs of the Holocaust who 3 years after walking beneath the shadow of death, rose up from the ashes to resurrect themselves to reclaim a Jewish future."

The tweet was slammed by furious Jewish observers, who charged that Pence had framed the Holocaust with, of all things, a Christian narrative.

Mike Pompeo, speaking in Jerusalem in 2019, said it was "possible" that God had sent Trump to save the Jews: "I am confident that the Lord is at work here," he said.

Falwell once said, "To stand against Israel is to stand against God. We believe that history and scripture prove that God deals with nations in relation to how they deal with Israel."

Indeed, Trump's knee-jerk retorts that, despite all evidence to the contrary, Democrats are the real anti-Semites, seems mostly intended to prove his devotion to this strain of apocalyptic fundamentalism, which appears to have increasingly more sway in the White House.

"It's crusade logic," said Sexton, the author, drawing a line between the personal and universal apocalyptic narratives championed now in two White House generations. "People looking for a purpose are drawn into fascistic, military crusades. Whether they believe or not, they'll make concessions. Every former white supremacist or terrorist I talk to tells the same story: Find insecure, directionless men and tell them they can be part of something larger and more powerful than themselves. They'll go and kill, or go and die — just like al-Qaida or ISIS."

Perhaps the arrival of McEnany heralds an eclipse, the rise of an inward-looking Christian narrative, a sort of apocalyptic narcissism, as the first social media generation comes of age and gains positions of public and political influence.

As Manseau concludes, "it may only be a matter of time before the rhetoric of American warriors gives way to American martyrs. As the theological interpretation of Columbine has shown, the line between the two can be very thin."

Kayleigh McEnany did not respond to Salon's request for comment.