Gun industry boasts of booming sales amid mounting paranoia — but who or what is making Americans so afraid? 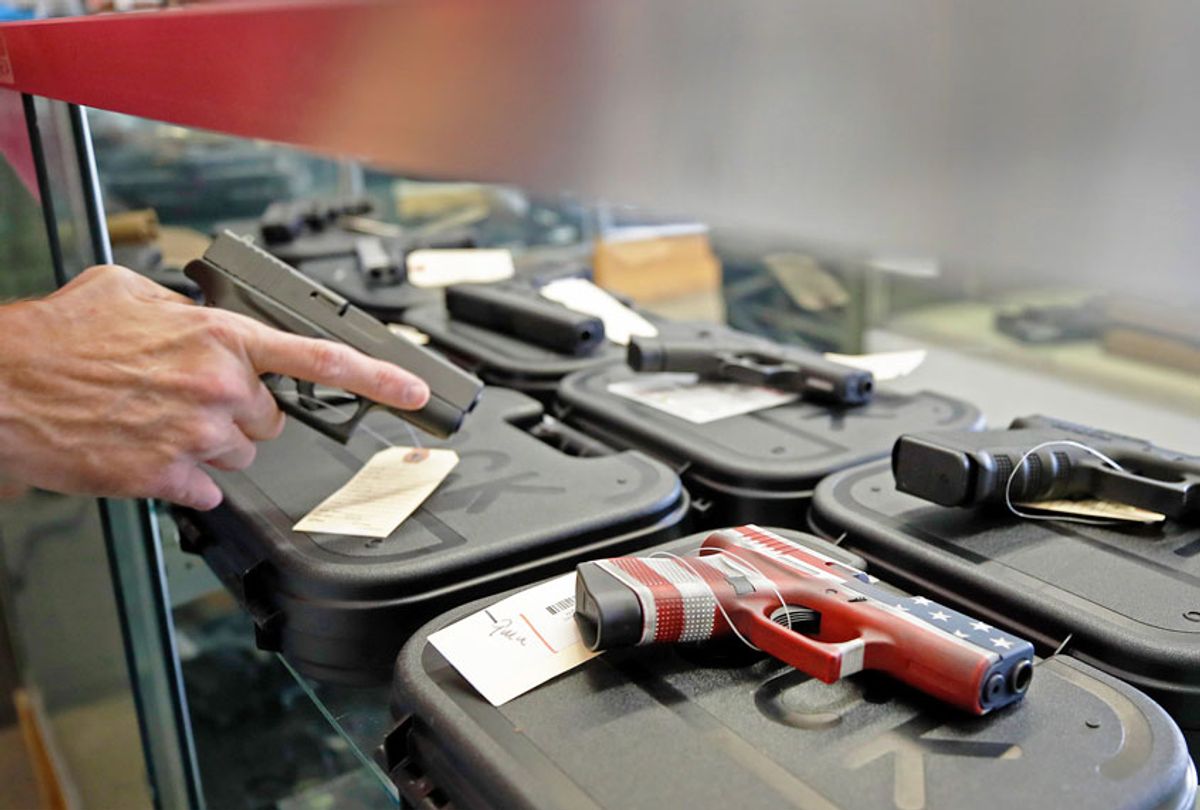 A worker restocks handguns at Davidson Defense in Orem, Utah on March 20, 2020. - Gun stores in the US are reporting a surge in sales of firearms as coronavirus fears trigger personal safety concerns. (GEORGE FREY/AFP via Getty Images)
--

In the days since, there's been a lot written about how Den Hollander, a "men's rights" activist and ardent supporter of President Trump, had used the internet to heap misogynist scorn on Judge Salas, the first Latina appointed to the federal bench in New Jersey.

The number of threats made against federal judges has spiked over 400 percent over the last four years to 4,500 last year, yet fewer than 10 percent of those threats were investigated, according to the U.S. Marshals Service.

The tone of Hollander's racist male grievance rants mirrored the cyber-bullying of federal judges by Trump himself, which U.S. District Court Judge Paul Friedman warned in 2019 were taking our nation into "uncharted territory" and risked undermining the "faith in the rule of law itself."

"This obviously is a trend we're seeing throughout public life, but I would suggest, the stakes in attacking the judiciary have graver implications," Judge Friedman said, according to the Washington Post's reporting. "And regrettably, the current President of the United States is feeding right into this destructive narrative."

He continued. "We are witnessing a chief executive who criticizes virtually every judicial decision that doesn't go his way and denigrates judges who rule against him, sometimes in very personal terms. He seems to view the courts and the justice system as obstacles to be attacked and undermined, not as a co-equal branch to be respected even when he disagrees with its decisions."

Den Hollander's murderous act killed a young man who would have likely been in his 50s in a nation that will be majority-minority, something that 46 percent of white respondents believed would "weaken American customs and values," according to a Pew Research Center poll published in March of 2019.

That same survey, taken a full year before COVID rocked our world, found that a majority of people of all races surveyed predicted that 30 years from now "the economy will be weaker, health care will be less affordable, the condition of the environment will be worse and older Americans will have a harder time making ends meet than they do now."

The last few months in the deadly jaws of COVID-19 have acted as a kind of cruel accelerant, a cosmic fast-forward to a dystopia where fear, anger and scarcity have hijacked our collective consciousness.

Exhibit A would be Sunday's edition of the Asbury Park Press, whose front page proclaimed "Gun applications triple in Jersey," "26 lifeguards at Long Beach Island test positive for COVID-19" and "Thousands of jobless are still waiting for check."

New Jersey is not an outlier.

Just as millions of Americans have taken to the street in peaceful protests in the aftermath of the death of George Floyd in police custody, millions of their fellow Americans have become first-time gun buyers, according to the National Shooting Sports Foundation.

"The early part of 2020 has been unlike any other year for firearm purchases — particularly by first-time buyers — as new NSSF® research reveals millions of people chose to purchase their first gun during the COVID-19 pandemic," according to the foundation website"

Thanks in large part to the work done by NSSF's legislative team, the firearms industry was deemed essential in most states, and firearm retailers were allowed to stay open to conduct business. And conduct business they did, with NSSF-adjusted NICS figures showing year-over-year increases of 80 percent in March and 69 percent in April 2020. These strong increases led to more than 6.5 million NSSF-adjusted background checks in the first four months of 2020, up 48 percent from 4.4 million during the same period in 2019.

So, what's driving this rush to arm? What's sparked this creeping sense that our nation is unraveling and that our civil society is no longer capable of rising to the challenges we face, whether those are systemic racism or global warming?

Could it be a heavily armed federal government that has failed to institute an effective national public health response to a once-in-a-century pandemic that is likely to kill 200,000 Americans by Election Day, and has isolated us as a disease-infected global pariah?

Or perhaps it's the realization that for all of our national hubris, our winner-take-all economy was based on a fragile model that made a tiny percent of people extremely rich while tens of millions of Americans struggled week to week for the basics.

We did not get here overnight. It wasn't just Donald Trump's divide-and-conquer modus operandi that has us on the precipice of imploding. I heard the tearing of our national fabric in the congressional debate several years ago over providing relief for the states hit hardest by Hurricane Sandy, when other regions of the country resisted helping.

This alienation between so-called red and blue states is clearly manifest in the refusal of Republican-governed states like Georgia, Florida and Texas to learn from New Jersey and New York's COVID-19 experience, as if there was something innately inferior about states governed by Democrats.

And now, as the nation sinks deeper into disease and economic dislocation, our politics are increasingly fueled by a cynical fracking of these fissures that produces more hot gas to obscure reality.

There's no doubt that part of what's feeding our collective angst is the way the corporate news media represents our deteriorating national circumstance.

We are being pickled in a heavy rotation of video images of federal law enforcement officers launching tear gas rounds and beating protesters in Portland, Oregon. On Fox News, these images are used as propaganda that cast Trump as the guarantor of law and order. In fact, in an effort to stabilize his free fall among suburban female voters, the president's campaign is warning that without such a robust response, disorder will spread from America's "liberal" cities and overwhelm the tranquility of Main Street, Everywhere Else.

On MSNBC, the same footage is used to set up segments predicting that Trump will break the more than 220-year tradition of a peaceful transition of presidential power by refusing to accept the results of the election. This of course ratchets up the sense of dread that some strategists hope will juice turnout for Joe Biden as it sucks more and more Americans into a vortex of anxiety and fear.

What too many journalists fail to do in setting up these video clips is what MSNBC host Ari Melber did when he prefaced them with a contextual map of the limited area of downtown Portland where the events were playing out. For most people in that city, life continues pretty much as usual.

That footage only depicts what's happening in and around one neighborhood in one city, but it serves as effective clickbait and in the process distorts our situational awareness about street conditions throughout the country, at a time when many people are cut off from friends, family and the larger world.

I recently heard the consequences of living in this virtual reality in the voice of a health care worker who is also a young mother in Ocean County, New Jersey. She told me that the arc of current events as depicted on Fox News had convinced her she needed to get a handgun for personal protection.

Who did she think was threatening her family, I asked her? She said, "The looters, just like we saw with Sandy."