Stella Immanuel believes in demon sperm, hydroxychloroquine and scientists who want to vaccinate against religion 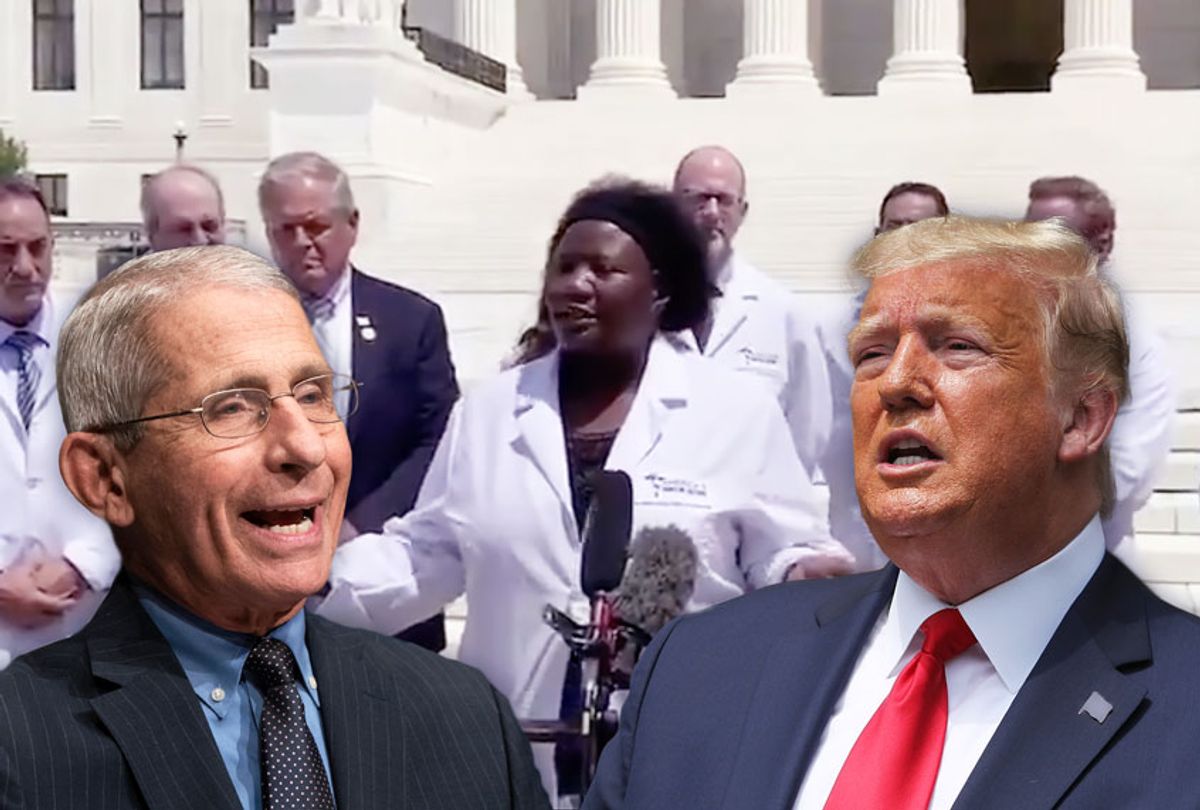 President Donald Trump shared a video Monday featuring a Houston doctor who has claimed that some reproductive disorders are caused by dream sex with demons and witches, doctors use alien DNA to treat patients and scientists are developing a vaccine to destroy a gene in our brains that makes people become religious.

The doctor, Stella Immanuel, claimed in a phone call with Salon that she had met Tuesday with senators on Capitol Hill. She declined to reveal names, saying: "It's not for publication. If it had been for publication, they would have told people."

Speaking from the steps of the Supreme Court in the viral video, Immanuel declared that unproven anti-malaria treatment hydroxychloroquine, which Trump hawked for months as a so-called miracle cure, was so effective against COVID-19 that "you don't need a mask."

Immanuel also claimed in the video that the federal government, including top infectious disease expert Dr. Anthony Fauci, had maligned the drug — which at one point the president said he took daily — specifically to hurt Trump's re-election chances.

"Nobody needs to get sick. This virus has a cure," Immanuel said, falsely.

Immanuel earned her medical degree in Nigeria and is a registered physician in Texas. She founded Rehoboth Medical Services 11 months ago, which she runs in a suburban Houston strip mall next to her church, Firepower Ministries.

In a Facebook ad promoting her clinic, Immanuel asked all patients to cover their faces before entering. "Wear a mask, or a scarf or anything to cover your face," she said.

Donald Trump Jr. shared the "must watch" video, followed by a separate retweet from the president. The videos were later removed from social media, and Twitter suspended the president's eldest son for violating its rules about posting coronavirus misinformation.

The Daily Beast's Will Sommer reported Tuesday that Immanuel has a history of pushing fringe beliefs far more bizarre than these. In YouTube sermons, self-published books and articles on her website, Immanuel has pushed a number of outlandish, unscientific claims.

She says reproductive disorders, such as endometriosis, impotence, infertility and miscarriages, are consequences of sex with evil "spirit husbands" and "spirit wives," biblical characters turned demons and witches who transform into humans and have sex with people in their dreams.

"There are those that are called astral sex," she said. "That means this person is not really a demon being or a nephilim. It's just a human being that's a witch, and they astral project and sleep with people."

Immanuel claimed in another sermon that year that scientists had discovered what she characterized as some sort of gene in the brain that makes people religious — and were developing a vaccine to destroy it.

"They found the gene in somebody's mind that makes you religious, so they can vaccinate against it," Immanuel said.

In a 2015 sermon, Immanuel attempts to describe a unified theory about a global Illuminati takeover, which includes such claims as:

That sermon also proposes a belief popular among fringe conspiracy theorists: that "reptilians" run parts of the government. She supports this by claiming to have spoken with a "half-human, half-E.T." spirit.

The video's widespread backlash did not cow Immanuel, who publicly "double dog dared" CNN anchors and Fauci to provide her with urine samples to prove they weren't taking hydroxychloroquine.

Immanuel warned that Jesus Christ would take down Facebook in a tweet, which as of this writing has more than 18,000 likes.

The strip-mall minister-physician has not let her flash of fame pass her by. In addition to scheduling the alleged Senate meetings, shortly before midnight Monday she pitched the president on a White House meeting.