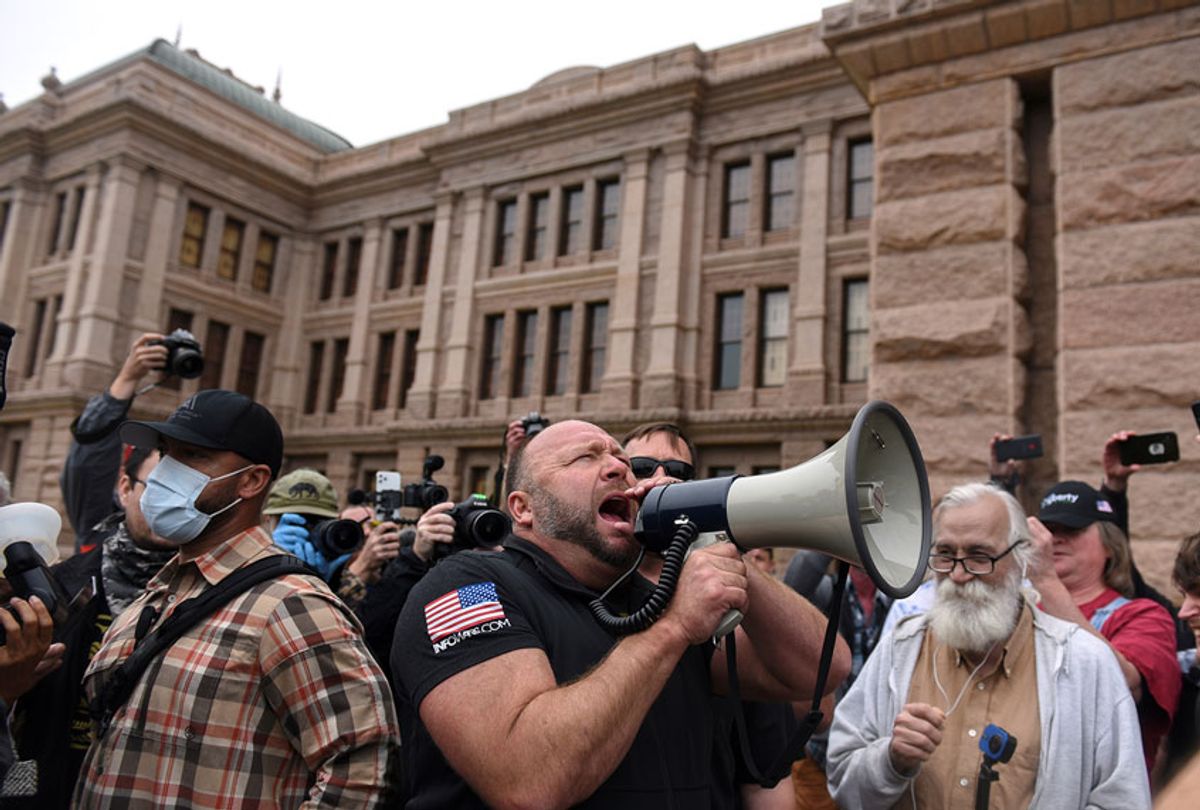 It is more likely that you know an Alex Jones true believer in 2020 than might have been the case in 2016. The really scary part is, that person might not even consider him or herself a Jones fan despite believing in a lie, or several, that Jones is responsible for hurling into the larger public sphere.

But thanks to Jones and people like him, large portions of the public refuse to believe in basic facts. They will, however, believe him and the people who parrot his lies and illogic, including our country's current president and his political enablers. A Pew Research Center survey conducted from March 10-16, 2020, backs this up: nearly 30% of Americans believe the novel coronavirus that causes COVID-19 was created in a lab.

"United States of Conspiracy," the latest "Frontline" hour from filmmaker Michael Kirk, could have been about any number of kooks or groups like QAnon responsible for injecting dangerous, unsubstantiated claims into the realm of mainstream discourse. In Jones, however, Kirk and his co-writer Michael Wiser have a personification of the insidious nature of channeling fringe belief into political weaponry.

Through InfoWars, Jones' multimedia fear factory dedicating to chunking out endless crackpottery by way of podcasts, videos, and written hokum, Jones has a hand in blasting so many conspiracy theories far and wide and with such frequency that there's simply no telling how many of them started with him.

Many didn't but some of the most dangerous and harmful did, foremost among them being that notions that the tragic mass shooting at Sandy Hook Elementary School, which took the lives of 20 children aged 6 and 7 in addition to six adult staffers, was faked. Mourning families appearing on camera to talk about their horrific loss were branded "crisis actors" by Jones, and his fans took that poisoned ball and ran with it.

How about the notion that former president Barack Obama was not born in the United States? Or did you hear the one about Hillary Clinton being a pedophile trafficking children out of the basement of a pizza parlor in Washington D.C.? Jones was delighted to tell whoever would listen all about it. One man believed in the conspiracy theory that became known as "Pizzagate" so completely that he drove to the restaurant with an automatic weapon, intending to free the child captives that never in existed held in a basement that wasn't there.

Within its concise 53 minutes the "Frontline" episode explains how Jones came to have such an outsized influence on American politics and how, with ample assistance from political operative cartoon-villain-come-to-life Roger Stone, he effectively took over the Republican party and infected all three branches of government. Stone was convicted in former special counsel Bob Mueller's investigation for lying to Congress, witness tampering, and obstruction of justice.

A wide range of experts and people close to Jones help the filmmakers build the explanation of how this happened and more importantly the why of it, including his ex-wife Kelly Rebecca Nichols, former InfoWars video editor Rob Jacobson -- and Stone, whose prison sentence was recently commuted by Donald Trump.

And really, the why is easy to explain in one word: fear.

"United States of Conspiracy" opens with a scene from an InfoWars episode at the moment the 2016 presidential election was decided, with Stone and Jones at the host's desk getting drunk on champagne. From there it takes a brief look at Jones' origins in Austin, Texas, where he was considered in the 1990s to be a part of the local color – just a hometown nutbar that nobody really took seriously, as Salon's politics reporter Amanda Marcotte explained in a 2016 story published days before Trump was elected president.

Jones' profile grew after the terrorist attacks on September 11, 2001, the blame for which Jones assigned to the United States government, as he did the Oklahoma City bombings and eventually the tragedy at Sandy Hook.

The ramifications of this heartless nonsense are still being experienced by the bereaved parents of these children – including Lenny Pozner, who lost his child Noah and who was harassed and threatened into hiding by Jones' listeners. Despite remaining in danger to this day he appears in the hour, but hidden in shadow.

In the end, it doesn't matter whether the seeds of these lies originally were planted by Jones, some loony 8chan poster, a white supremacist's social media account or some poor soul muttering to himself on a street corner. We are living with the effects of his baseless rants because of Jones' outsized influence, and Fox News hosts such as Steve Doocy or Trump are repeating them to cable audiences or on the White House lawn.

Jones stopped being a mere menace many years ago, but "United States of Conspiracy" turns up the volume on the alarm alerting us as to why it's no longer enough to simply ignore him or the people who spout his lunacy.  It has moved from the fringe into the heart of our democracy. If you've been afraid to go to the grocery store for fear of encountering some defiantly unmasked mouth-breather lording over the produce section, rest assured that Jones has a hand in promoting that person's behavior. Conspiracy theory is the pandemic that made the COVID-19 pandemic possible.

Politicians are all too happy to serve the bizarre brand of crazy that Jones concocts to minions looking for reasons to explain their unreasonable animus for policies and, more likely these days, people they don't agree with or simply hate. Jones' fabrications first found purchase with far right members the Congress and then the president himself, and for similar reasons. All of them are tapping into white male rage, general insecurities concerning their place in an evolving economy and old-fashioned racism and xenophobia. Jones is doing it to make money; politicians are doing it to stay in office and consolidate power.

An already wide distrust of the media has devolved in journalism containing inconvenient or unpleasant truths being branded as fake news. Natural disasters, mass shootings or acts of domestic terrorism are explained as "false flag" operations. Science is no longer trustworthy, and yet Jones has enough people believing in what he tells him that some will purchase supplements and toothpaste that he claims "kills the whole SARS-corona family at point-blank range."

Four years ago we could have said, and indeed did say, that Alex Jones appeals to the worst parts of society. The fact that the worst of society is now front and center in the battle for our democracy makes "United States of Conspiracy" necessary and utterly sobering election season viewing.

"United States of Conspiracy" premieres Tuesday, July 28 at 10 p.m. on PBS member stations, or stream on PBS.org/frontline, on the PBS Video App and on YouTube.