Remember, Bill Barr and Mitch McConnell are delighted to stomp on the rule of law to keep Republicans in power 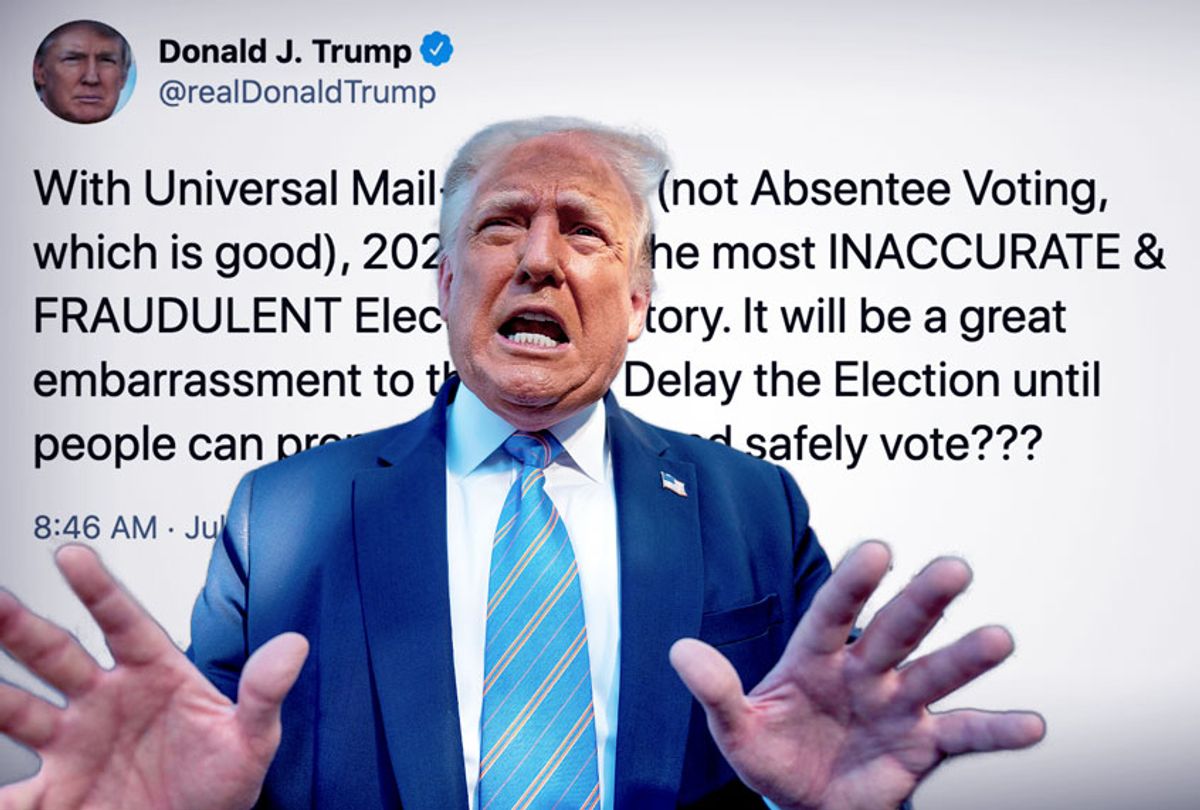 The first thing to understand about Donald Trump's threat to delay the November election — should we call it a public fantasy? — is that it's a distraction, like so many things our president says and does.

Around 8:30 Eastern time on Thursday morning, news came down that the U.S. economy saw its worst contraction since the advent of modern economic recordkeeping after World War II, with GDP falling at an annual rate of nearly 33% in the second quarter, 9.5% below where it was the previous quarter. This is a plunge exponentially larger than the fallout from the crash of 2008, and probably the largest since the Great Depression of the 1930s.

At 8:46 a.m., Trump let loose with this Twitter turd: "With Universal Mail-In Voting (not Absentee Voting, which is good), 2020 will be the most INACCURATE & FRAUDULENT Election in history. It will be a great embarrassment to the USA. Delay the Election until people can properly, securely and safely vote???"

As a distraction, the gambit worked. Immediately, the shift in headlines and cable news focus went from the country's record-setting economic devastation toward this idiotic but deeply troubling question of whether Trump can really get away with delaying the election until such time as he thinks he can win it (which may be never).

The second thing to understand about Trump's threat is that it's nonetheless deadly serious. No matter how many reassuring articles come out about how there's no mechanism available to Trump to delay the election, the public should not be complacent about this.

Rule of law, for the people who surround Donald Trump and prop him up, is something to be broken, not respected. Trump is a profoundly stupid man, but he does have a flight of much smarter people around him to do his bidding, especially when it comes to securing power for themselves and shutting down the ability of the American people to vote the bastards out.

We should not underestimate what people like Attorney General Bill Barr and Senate Majority Leader Mitch McConnell could come up with, if they decide that Trump's harebrained notion of using the pandemic as cover to "reschedule" (read: cancel) the election is the only path to keeping Republicans in power in 2021.

Barr, after all, has spent his time in charge of the Justice Department focused on remaking the institution as one focused on covering up Trump's crimes, instead of dedicated to fighting crime. He started by using his powers to falsely frame the findings of Robert Mueller's report on Russian election interference, claiming that Mueller found "no collusion." That was an outright lie. Mueller found extensive collusion between the Trump campaign and the Russian conspiracy, much of it right out in public, even if it fell short of what Mueller felt could be charged as criminal conspiracy. But Barr successfully pushed out the "no collusion" narrative, and the impact of the entire Russia investigation's dwindled to almost nothing, despite Trump's demonstrable guilt in the cover-up.

Since then, Barr has been dedicated to the singleminded goal of making sure Trump's power is secure and untouched by the meager concerns of people who believe in democracy, the rule of law or accountability. He's pushed out U.S. attorneys for being insufficiently corrupt and compliant, backed Trump's outrageous lies about voter fraud, helped spring Trump's cronies from prison, and enthusiastically supported Trump's expanding experiment in using federal police as a fascistic armed force to suppress dissent.

So, yes, Trump is both dumb and cowardly. But he has Barr at his side, an intelligent but dark-hearted man who has never hesitated to lie, cheat or swindle to secure Republican power. Above all other things, Barr is good at coming up with legal rationales to gut democracy and the rule of law. There's good reason to suspect that he'd view the problem of concocting legal rationales for canceling or delaying the election not as a repulsive task but a fun and exciting challenge — exactly the sort of authoritarian overreach he came out of retirement to enact.

Trump also has McConnell by his side, a Machiavellian wizard of politics who has never met a line he won't cross when it comes to securing power for himself and the Republican Party.

McConnell has already used a delaying tactic to steal one of the highest offices in the land from a Democratic president who had the legal and constitutional right to control it, and deliver it to a conservative who will hold that office until he dies or retires.

The mainstream media has basically forgotten about this, but we should not: Supreme Court Justice Neil Gorsuch, Trump's first nominee, holds a seat that should have belonged to Merrick Garland, Barack Obama's nominee to replace Justice Antonin Scalia after the latter's death in 2016. McConnell didn't even bother to come with some elaborate legal justification for holding the seat open until (he hoped) a Republican president could fill it. He made some bad-faith argument about the looming election, but gleefully abandoned it once he no longer needed it. The whole maneuver was unconstitutional (or, in the most generous possible interpretation, extra-constitutional), but McConnell got away with it because, as it turned out, no one in Washington had the power to stop him.

That's also the question we must consider when it comes to Trump attempts to hold power through some sort of coup, as he has increasingly indicated he's willing to do. Even if he can't delay the election — and there's no obvious remotely legal way to do that — by making these demands, Trump is laying more groundwork for declaring the election fraudulent and rejecting the results if and when he loses in November. He's surrounded by powerful people, such as McConnell and Barr, who are likely to back his play, especially if they see no other way to hang onto power.

Just because there's no visible mechanism for how they might do that is no reason to relax. Barr and McConnell are pretty much kept alive, at this point, by coming up with innovative, bad-faith ways to "interpret" the law in order to undermine what remains of our democracy.

Sure, whatever Trump tries to do to hang onto power in the face of an actual or impending electoral defeat — delaying the election, rejecting the results — will technically be illegal.

But I often think of the scene in the first season of "Game of Thrones" when Ned Stark presents Cersei Lannister with a document that gives him, not her, the right to sit on the throne. She tears the paper up and throws it down, saying, "Is this meant to be your shield, Lord Stark? A piece of paper?" You know, before having him arrested and, eventually, beheaded in public.

The Constitution didn't stop McConnell from stealing a Supreme Court seat. The rule of law hasn't slowed Barr down one bit. We will need more than futile gestures toward the sanctity of the law to keep Trump and his minions from doing whatever they can to steal the election.

We can only hope that Democrats understand this and are working on a plan. For instance, they need a clear and secure way to swear Joe Biden into office on Jan. 20 — as the Constitution specifically mandates — out of the reach of Trump's shadowy "federal police." They need to know that the Secret Service and the leadership of the military will cooperate in an orderly transfer of power, and will accept or enforce the rule of law.

To drive Donald Trump from office, we can't rely on a piece of paper. It simply isn't enough.