Trump is getting truly desperate — and that means he's increasingly dangerous 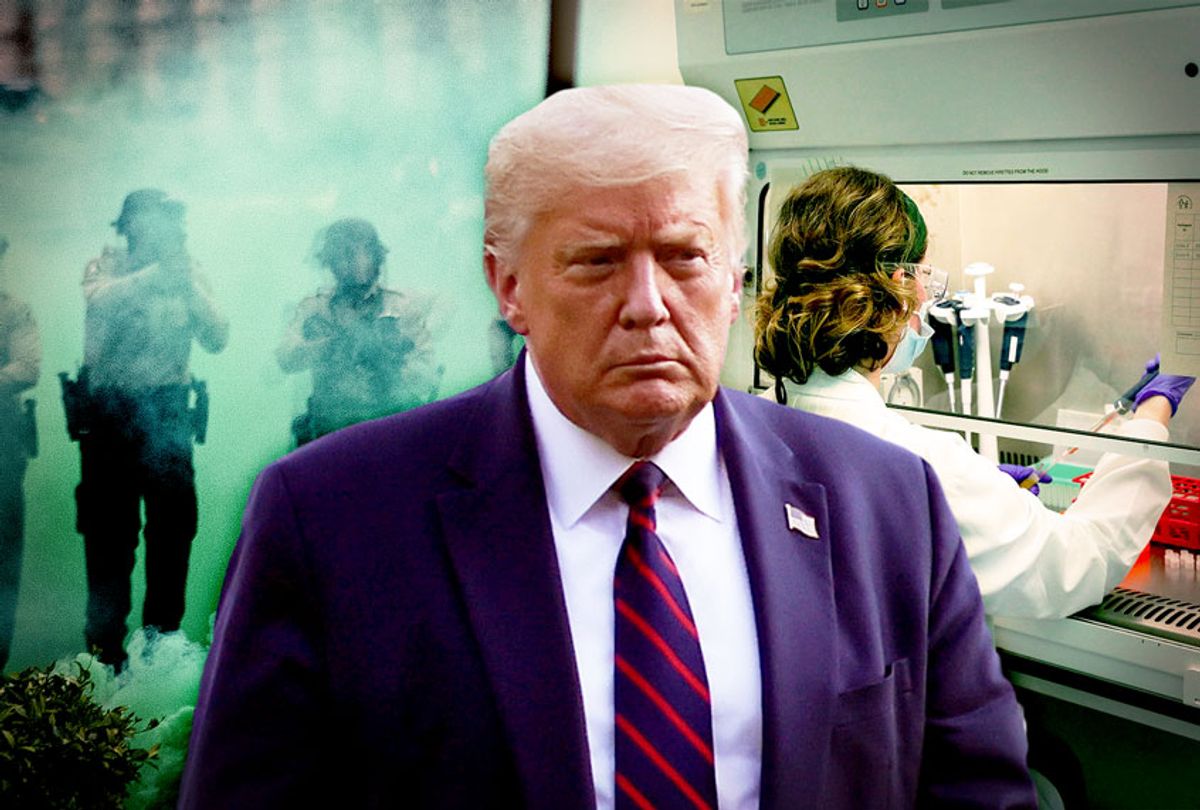 Donald Trump, with police tear-gassing protesters and a scientist working in a vaccine lab (Getty Images/Salon)
--

One of the first things that activists and educators who work to stop domestic violence learn is this: The most dangerous time for the victim is when she tries to leave the abusive relationship. The abuser, desperate to keep his power and control over the victim, will drastically escalate the threats and violence if he senses that she's looking for an escape route. If she does get out, the abuser will often track her down and try to force her to return through violence. This is why advocates for victims emphasize the importance of careful planning to escape an abusive relationship, since abusers rarely just let a victim walk away.

The parallels between the situation of many abuse victims and the nation's dilemma when it comes to removing Donald Trump from power have not been lost on feminists. As sex educator Twanna Hines noted on Twitter on Friday, Trump "knows his time is up." She predicted that he will lash out the way that abusers do "when the relationship is ending."

We're already seeing the evidence that Trump, terrified of being kicked out by the voters, is getting increasingly unhinged in his flailing attempts to cling to power, as evidenced by last week's threat — disguised as a helpful suggestion — to "delay" the November election.

The good news is that — despite the GOP's usual willingness to embrace any scheme that maximizes their power for themselves, regardless of legal or or ethical concerns — leading Republicans seem disinclined to help Trump find some excuse to nullify Congress' power to determine the date of the election. Even Senate Majority Leader Mitch McConnell, who has already used delay tactics to steal a Supreme Court seat from a Democratic president, ruled out using a similar strategy this fall to steal the election.

As my colleague Andrew O'Hehir reassuringly wrote over the weekend, it's also unlikely that "Trump has anywhere near the courage, the confidence or the means to pull off any version of a coup with success" if he loses in November. It's too big a task, with too many moving parts and too little buy-in from the corporate power interests that back the GOP, he argued.

But even though we're likely to see a situation where former Vice President Joe Biden is sworn in as president on Jan. 20, 2021, that doesn't mean we're in anything like a position to relax. Like the abusive husband who would rather see his wife injured or dead than let her move out in peace, Trump will, as Election Day nears, increasingly turn to schemes to keep power that will pose real threats — not just to our democracy, but to the immediate safety and well-being of Americans.

Even if Trump is successfully removed from office, the amount of damage he could well do to punish the American people for rejecting him is, frankly, terrifying.

The most obvious threat is the pseudo-military presence Trump is rapidly building up in the streets of American cities. He famously kicked this by tear-gassing peaceful protesters in Washington, and then moved the show across the country to Portland, Oregon. He's now transitioning it to cities in swing states, including Cleveland and Milwaukee.

The presence of these federal police should make anyone uneasy. It's becoming increasingly clear, as House Majority Whip Jim Clyburn, D-S.C., noted on CNN on Sunday, that Trump has no "plans to leave the White House" if he loses in November.

Even if, as O'Hehir persuasively argues, Trump is eventually pushed out, the grim reality is that his near-certain refusal to concede defeat  — something no losing candidate has done in the era of modern politics — will lead to all manner of chaos, and likely to violence. Earlier this summer, a bipartisan group of former government officials and political scientists gathered together for the Transition Integrity Project, which largely consisted of a series of war games to project possible outcomes if and when Trump refuses to concede.

"[I]n every scenario the answer includes street violence and political crisis," Brian Beutler of Crooked Media explained in his weekly newsletter description of the project.

The project looked at the various political arson fires Trump will light as he desperately seeks to reject the election results, and I recommend that everyone read the Boston Globe's coverage of these particulars. But what is most viscerally alarming, in light of the federal police buildup that's occurred since the project, is the likelihood of street violence. Once Trump refuses to concede, there will almost certainly be widespread street protests against him. By then, Trump will have already had months under his belt of using federal police to tear gas, beat and arrest protesters. It's unlikely that he would hesitate for a moment to use these forces to sow even more chaos and violence if Americans dare to protest his unwillingness to accept electoral defeat.

But that's far from the only way that Trump is putting Americans in physical danger in his desperate efforts to keep power over a country that, as polling data shows, is eager to put him in the ex-president category. As the New York Times reported on Sunday, government scientists are concerned that Trump will try to force them to release something he can call a coronavirus vaccine by October — so he can claim credit for it, naturally — regardless of whether it's been demonstrated to be safe or effective.

From the very beginning of the pandemic, Trump has made it clear that his only concern is winning re-election, and that if he has to sacrifice millions of Americans to sickness or even death to get there, he won't think twice about it. He has defied the advice of medical scientists on enforcing lockdowns, wearing masks and expanding virus testing, mostly because he believed — however mistakenly — that efforts to fight the disease would hurt his re-election chances more than an unchecked pandemic. Now, with more than 4.6 million confirmed cases and 155,000 deaths, Trump expects the same medical scientists he's derided for months to rush in and save his campaign — even if doing so makes the pandemic worse in the long run.

Trump's increasingly desperate efforts to keep control aren't just a threat to life and limb. His desire to prevent people from even being able to vote him out in November also threatens fundamental American institutions. That includes the institutions that aren't ostensibly political at all, but exist to serve the daily needs of all Americans, such as the U.S. Postal Service.

Yep, like an abusive husband who threatens to kill the family pet if his wife leaves him, Donald Trump has declared war on the post office. Relatively quietly, he has been gutting the ability of the Postal Service to deliver mail on time, both out of Republican ideological hostility to good government and because Trump personally thought this would be useful as part of his years-long vendetta against Amazon CEO Jeff Bezos.

But now that it appears the election is going to be conducted in large part by mail, to allow voters to avoid exposing themselves to the coronavirus, Trump's war on the the post office has escalated. He has been demonizing mail-in ballots as fraudulent, as part of his run-up to rejecting the election results. (There is of course virtually no evidence of any voter fraud in the history of voting by mail.) Now the chips are falling into place: Trump undermines the ability of postal workers to deliver the mail on time, and then uses the fact that mail isn't being delivered on time as an excuse to reject the results of the election.

The collateral damage of this strategy extends far beyond just electoral integrity, though certainly that would be enough reason to be freaked out. Americans rely on the mail system, now more than ever, for life necessities like paying bills or getting prescriptions filled. Trump, however, is fully prepared to demolish this critical institution in his desperate and hopefully fruitless bid to nullify an American election.

I point all this out not to alarm anyone unduly, but so we can be prepared. The success of a victim leaving an abuser depends largely on her willingness to anticipate her abuser's violent reaction when she tries to get out. Having a clearly thought-out escape plan can be the difference between getting away successfully or getting hurt.

Similarly, Americans will need an escape plan to get away from Trump. Even if our institutions successfully hold up well enough that a new president takes office in January, the amount of damage Trump can do to the country in his scorched-earth efforts to hang onto power is terrifying to contemplate. We need to understand that he will not be held back by conscience or decency from doing physical harm to Americans or destroying even backbone institutions, and plan accordingly. This isn't just about winning back the White House and saving democracy. It's about minimizing the casualties along the way.