New York AG sues to dissolve the NRA: “Top executives funneled millions into their own pockets”

“The corruption was so broad . . . They have basically destroyed all the assets of the NRA,” AG Letitia James says 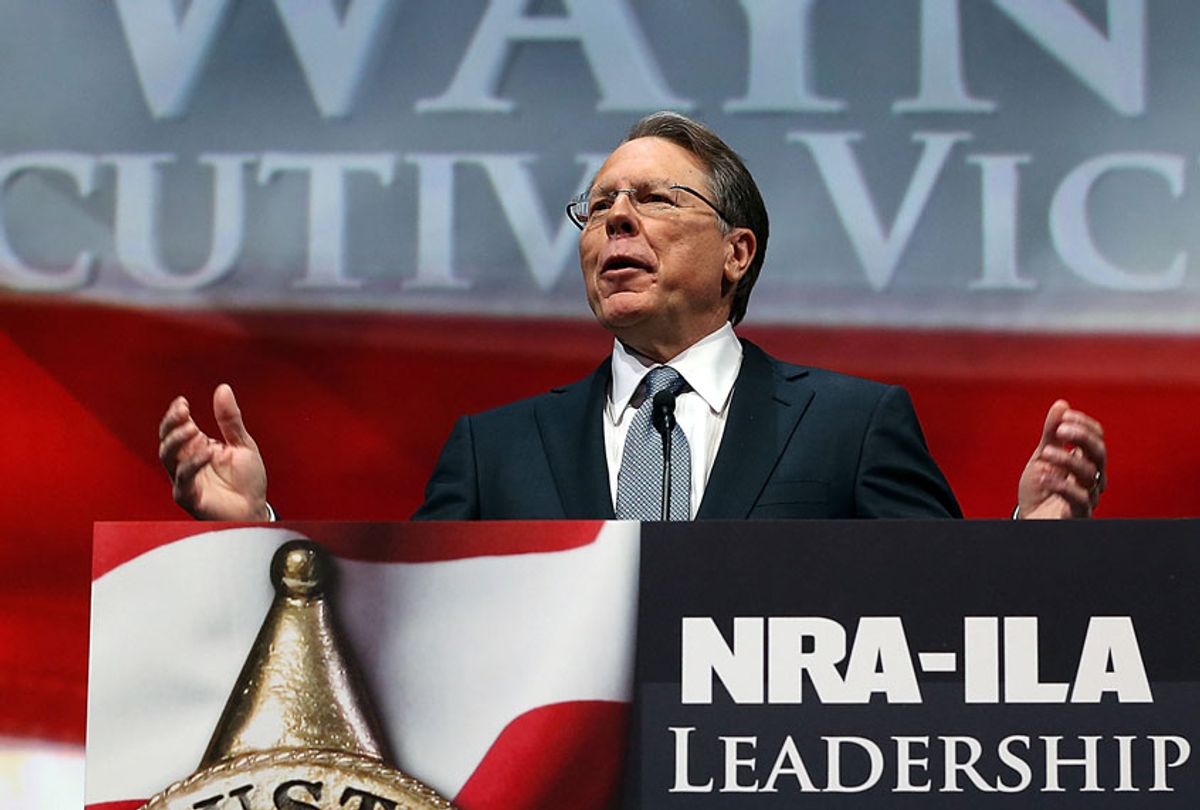 New York Attorney General Letitia James filed a lawsuit Thursday seeking to dissolve the National Rifle Association (NRA). The suit accuses CEO Wayne LaPierre and other current and former NRA executives of diverting funds from the charitable mission of the organization into their own pockets.

James seeks to dissolve the pro-gun organization, remove LaPierre from his leadership position and recover millions of dollars in lost assets. In addition to the NRA and LaPierre, the lawsuit also names the organization's general counsel John Frazer, former treasurer Woody Phillips and former chief of staff Joshua Powell.

The accusations include contributing to the loss of $64 million over three years for the NRA; awarding contracts for the personal benefit of close associates and family members; and failing to follow numerous laws.

"The NRA's influence has been so powerful that the organization went unchecked for decades while top executives funneled millions into their own pockets," James said in a statement. "The NRA is fraught with fraud and abuse, which is why, today, we seek to dissolve the NRA, because no organization is above the law."

James said during a news conference that she sought to dissolve the NRA because "enough was enough."

"The corruption was so broad and because they have basically destroyed all the assets of the NRA," she said. "Enough was enough . . . No one is above the law — not even the NRA."

James cited the Trump Foundation, which President Donald Trump agreed to shut down in 2018 following allegations that he had used the charity for his personal benefit, as precedent.

She said the lawsuit against the NRA followed an 18-month investigation into the organization. Salon previously reported on numerous allegations of financial impropriety by LaPierre and others.

The lawsuit contains several new accusations, including that LaPierre failed to report much of his personal income to the Internal Revenue Service (IRS) by funneling personal expenses through a public relations firm. James said she would refer those findings to the IRS, and any other potentially criminal activity uncovered by the investigation would be referred to the Manhattan District Attorney's Office.

"You could have set your watch by it: The investigation was going to reach its crescendo as we move into the 2020 election cycle," she said in a statement. "It's a transparent attempt to score political points and attack the leading voice in opposition to the leftist agenda. This has been a power grab by a political opportunist – a desperate move that is part of a rank political vendetta. Our members won't be intimidated or bullied in their defense of political and constitutional freedom."

"Thoughts and prayers today to the NRA, which is losing money and political power so quickly that by the end of this case, there might not be anything left to dissolve," Shannon Watts, the founder of Moms Demand Action, said in a statement. "The NRA is just as out of touch with American voters as they seem to be with N.Y. law, and come November, we're going to make sure they're out of power, too."

"We've long known of the NRA's corruption, which has lined the pockets of executives while advancing deadly policies that have cost countless lives," Robyn Thomas, the executive director of the Giffords Law Center, said. "Attorney General Letitia James' announcement today sheds light on that level of fraud and should mark the end of the NRA's influence on American politics. The NRA is a shell of the juggernaut that once held dangerous sway over Washington. Wayne LaPierre and his allies sit at the center of a tangled web of corruption and self-dealing. They are nothing more than crooks in fancy suits."

The NRA's internal turmoil became highly public last year when then-President Oliver North was forced out after pressing for an internal review of the group's finances, which LaPierre described as an attempted "coup."

Numerous subsequent media reports revealed that LaPierre had allegedly spent hundreds of thousands of dollars on pricy suits and lavish travel. The Washington Post reported that LaPierre "sought to have the nonprofit organization buy him a luxury mansion" in Texas following the Parkland school shooting.

James' lawsuit alleges that the NRA reimbursed LaPierre for $1.2 million in expenses for personal trips and items. LaPierre also allegedly spent $3.6 million of the group's money on private travel and executive car service in only two years, as well as millions for private security for he and his family.

Phillips, the group's former treasurer, is accused of setting up a $1 million NRA deal benefiting his girlfriend, as well as obtaining another contract which paid him $1.8 million before his retirement.

Frazer, the general counsel, is accused of failing to make sure the group followed applicable state and federal laws, plus certifying false financial documents.

Trump, who received more than $30 million in backing from the NRA in 2016, defended the group, calling the lawsuit a "very terrible thing" during remarks to reporters.

However, the NRA cannot simply avoid the lawsuit by moving to a different state.

"Even casual observers of the NRA have seen it turn from a safety-focused non-profit into a front group for gun manufacturers and a personal piggy bank for its leadership," John Feinblatt, president of Everytown for Gun Safety, said in a statement. "Everytown has been warning regulators and the public about this corruption for years. The NRA has endangered millions of lives and done unspeakable damage to our political system, and we agree with Attorney General James that dissolution and all other remedies must be on the table."