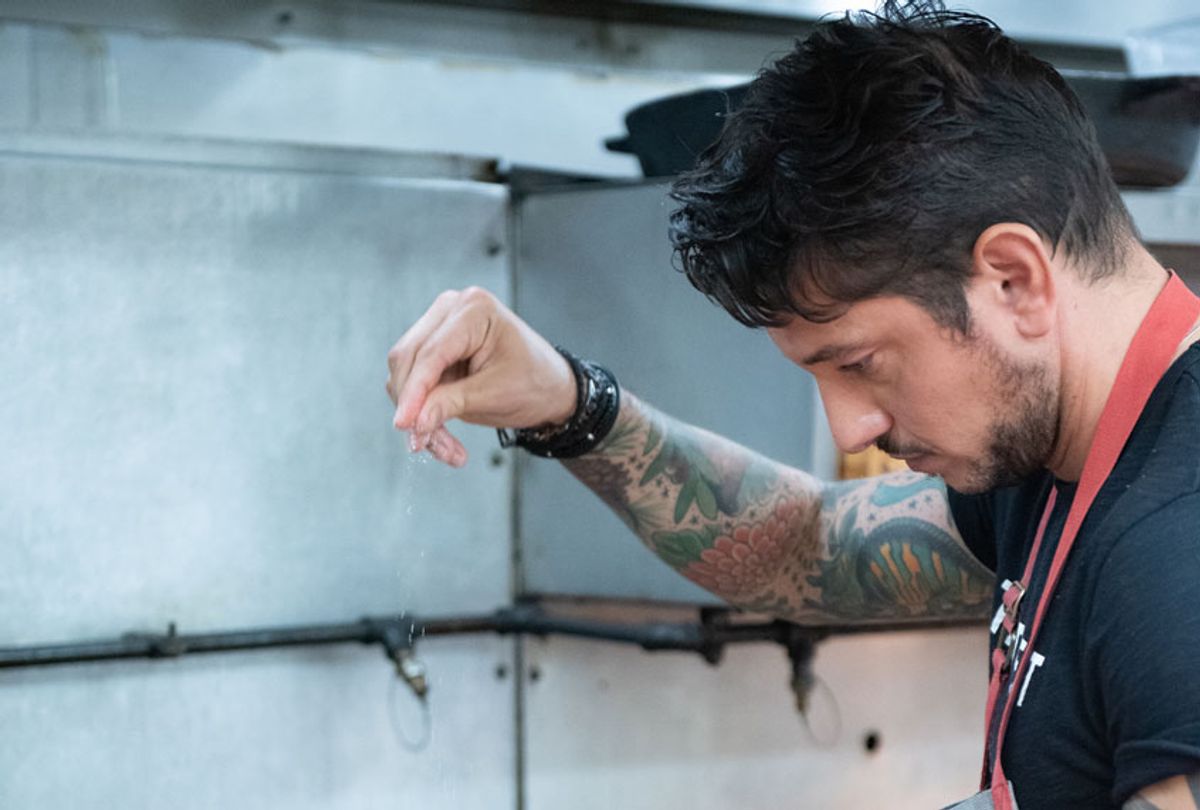 Chef Gabriele Bertaccini has become a household name following the success of his smash-hit Netflix show "Say I Do," in which he crafts real-life weddings with Jeremiah Brent and Thai Nguyen in less than a week.

In a recent interview, the chef shared the recipe for his Nonna's eggplant parmigiana with Salon Food. His love of food and his childhood in Tuscany are intertwined. Here Chef Gabe explains it, in his own words:

I was, I think, very fortunate that my child playground was a place like Tuscany — and Italy, more generally. It's a country of amazing foods with one of the most important culinary heritages in the world, and a country where we are very deeply connected to the food that we cook and the food we eat. I always say that if you want to understand something about Italians, you may want to join them at the dinner table. When I take people to meet some of my friends, I tell them all the time — it's the first thing — we're going to go for dinner. We're going to sit down, we are going to bring a couple of friends and we're going to spend two or three hours. And then usually, three hours into dinner, my friends are like, "Oh, I get it. I understand here what's going on." You start understanding more and more about us.

I personally grew up in a beautiful place in the countryside of Tuscany called Chianti, which is one of the most amazing wine regions in the world. And I was extremely fortunate and lucky to be able to open up my door and have eggs that were still warm from the chickens in the morning, and go and pick out the vegetables with my grandmother and then take all of that back into the kitchen and create some amazing magic with my grandmother and my mother.

While you're cooking Chef Gabe's Italian dishes, pour yourself a drink, too. At Salon Food, we're fans of this stainless steel cocktail bar, which stores 11 tools in one place. Next time your friends unexpectedly knock on your door, you'll be able to mix up a decadent cocktail in the blink of an eye.

1. Preheat oven to 350°. Heat oil in a large heavy ovenproof pot over medium. Cook garlic, stirring often, until golden, about 4 minutes. Add onion, anchovies (if using), and red pepper flakes and cook, stirring often, until onion is translucent, about 5 minutes. Stir in tomato paste and cook, stirring often, until slightly darkened, about 2 minutes. Add wine, bring to a boil, and cook until almost completely evaporated, about 1 minute. Add tomatoes, breaking up with your hands, and their juices; add basil and oregano and stir to combine. Swirl 1½ cups water into one tomato can, then the other, to rinse, and add to pot; season with salt. Transfer pot to oven; roast sauce, stirring halfway through, until thick and tomatoes are browned on top and around edges of pot, 2–2½ hours.

2. Let sauce cool slightly. Pass through the large holes of a food mill or process in a food processor until mostly smooth. Taste and season with salt.

Do Ahead: Sauce can be made 2 days ahead. Cover and chill.

3. Preheat oven to 350°. Place flour in another shallow bowl and eggs in a third shallow bowl. Working one at a time, dredge eggplant slices in flour, then dip in egg, allowing excess to drip off. Coat in breadcrumbs, packing all around, then shaking off excess. Place on wire racks.

4. Heat ⅔ cup oil in a large skillet, preferably cast iron, over medium-high. Cook as many eggplant slices as will comfortably fit in pan, turning once, until deep golden, about 5 minutes. Transfer to paper towels and immediately press with more paper towel to absorb oil. Working in batches, repeat with remaining slices, adding remaining ⅔ cup oil and wiping out skillet as needed. Let cool. Taste and season with more salt if needed.

6. Remove from oven and arrange fresh mozzarella over eggplant. Increase oven temperature to 425° and bake, uncovered, until cheese is bubbling and browned in spots, 15–20 minutes longer. Let rest 30 minutes. Top with basil leaves just before slicing.

Do Ahead: Eggplant Parmesan can be made 2 days ahead. Let cool; cover with foil and chill. Reheat in a 350° oven, uncovering halfway through, until bubbling gently at edges.