Do voters want "back to normal" or big, sweeping change? Maybe it's both at once

Joe Biden may win in a landslide — but the grassroots left insurgency can't be stopped. It's not a contradiction 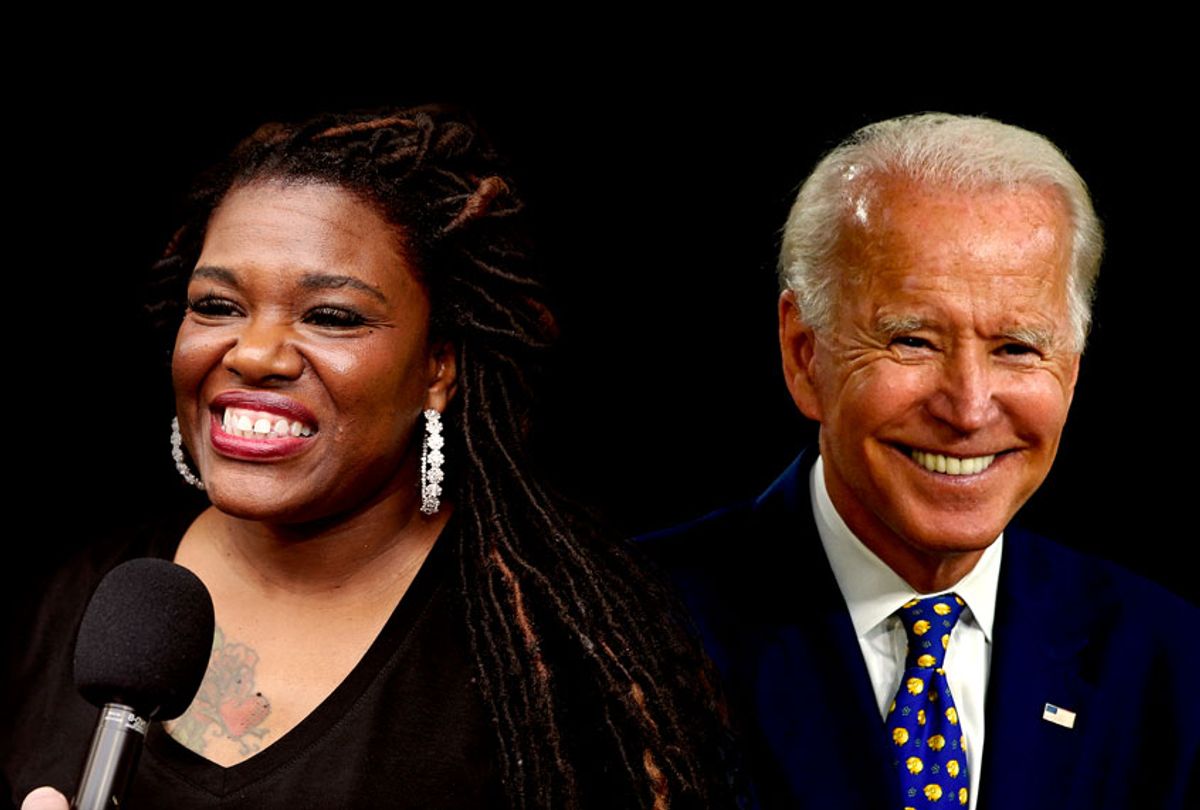 This entire extraordinary year has offered an extended lesson in the age-old truth that apparently contradictory things can both be true — usually because the contradiction is imaginary.

Consider the apparent confusion within the forces of "resistance" arrayed against Donald Trump, reflected in the unanswerable question afflicting the Democratic Party: Do Americans want a return to "normal," assuming for the moment that such a state existed in the recent past and can somehow be recovered? Or do they yearn — as the George Floyd protests suggested — for bigger and more ambitious change that goes beyond the paralyzed political duopoly to address America's enormous economic inequality, structural injustice and disordered national priorities?

In early March, just before the coronavirus began sweeping across the United States (or to be more accurate, just before we began taking it seriously) Democratic primary voters overwhelmingly chose former Vice President Joe Biden over Sen. Bernie Sanders as the party's presidential nominee. Progressives can mutter and complain about this all they want, and they certainly did: The theory that Biden's sudden reversal of fortune was engineered by Barack Obama is highly plausible, and the theory that the 2020 primary campaign represented a generational conflict within the Democratic electorate, in which older voters triumphed, is simply true.

But the outpouring of both white suburban voters and Southern Black voters for Biden, who had run a lackluster campaign that seemed to promise nothing specific beyond a return to a borderline-imaginary pre-2016 politics of decency and moderation, sent an unmistakable signal. By and large, Democratic voters didn't want the potentially disruptive "political revolution" promised by Sanders. They were eager to return to a "normal" America, more or less defined as a place and time where they didn't have to obsess about politics constantly and weren't kept up at night by the fact that the president was an ignorant and dangerous racist buffoon.

Who can blame them, honestly? And yet, and yet: Ever since Biden swept to victory on Super Tuesday and the subsequent primaries, Democratic primary voters in various places have delivered a different and more complicated message. Three more longtime incumbent members of Congress have been primaried out by more progressive opponents this year, including a committee chairman, Rep. Eliot Engel of New York, and the scion of a Black political dynasty in St. Louis, Rep. William Lacy Clay of Missouri.

As I wrote back in June, the primary race between Engel and Black middle-school principal Jamaal Bowman was without question a proxy war between House Speaker Nancy Pelosi and Rep. Alexandria Ocasio-Cortez (whose district adjoins Engel's), and also part of the long tail of the 2016 primary campaign between Sanders and Hillary Clinton, which essentially has never ended. A 30-year incumbent with a long record as a foreign-policy hawk and a supporter of Israel, Engel was endorsed by Pelosi, Clinton and Chuck Schumer, and leading Democratic PACs poured millions into his campaign. Bowman was backed by Sanders, Ocasio-Cortez and Elizabeth Warren, and pulled support from Justice Democrats and similar left-wing groups. In the end, it wasn't even close.

When you move to down-ticket races, the primary results have been even more startling. As Clay's defeat in St. Louis by Cori Bush, a registered nurse and Black Lives Matter activist backed by Sanders, AOC and the Justice Democrats, has made clear, this trend is not limited to big coastal cities — although New York is certainly its epicenter.

In the June 23 New York primary, seven incumbent Democrats in the State Assembly lost to opponents affiliated with either the Democratic Socialists of America, the Working Families Party or both. That result sent shockwaves through the region's political establishment and provoked wild charges that the challengers (mostly people of color) were part of some sinister racist conspiracy funded by out-of-state white radicals.

Clear across the country in New Mexico, the pattern was just as distinctive: Five powerful State Senate incumbents regarded as moderate or centrist Democrats — including the Senate president pro tem, the chair of the Finance Committee and the former chair of the Judiciary Committee — were defeated by younger progressive challengers in early June. As the Santa Fe New Mexican put it, "the conservative wing within the Democratic caucus in the state Senate is largely gone."

It's important to note here that in U.S. Senate races, which by their nature attract more media attention, public interest and donor money, the Democratic establishment has been far more successful in protecting its favored candidates. In virtually every case where Democrats see a realistic opportunity to flip a Republican-held seat — especially now that winning an overall majority seems within reach — the candidate hand-selected by Chuck Schumer and the Democratic Senatorial Campaign Committee has prevailed. Maine, Colorado, Iowa, Montana, Arizona, North Carolina, South Carolina, Texas and Georgia could all hypothetically elect new Democratic senators (at varying levels of probability), and not a single one of the nominees in those states is even remotely contaminated with the Bernie virus.

Even the solitary exception is instructive: In last week's Tennessee Senate primary, Black environmental activist Marquita Bradshaw, who ran an all-volunteer campaign on almost no money, staged a major upset over DSCC pick James Mackler, a white military veteran who spent $1.5 million on the race — and finished third. That race attracted virtually no national media and was not a focus of national fundraising, because nobody expects a Democrat to win a major statewide office in Tennessee anytime soon. Mackler was anointed to keep things respectable against Trump-endorsed Republican Bill Hagerty, and perhaps to distract GOP resources away from other races, notably the one between Amy McGrath and Senate Majority Leader Mitch McConnell in neighboring Kentucky.

I'm not suggesting that Bradshaw is more likely to win in November than Mackler would have been. She's not. But McGrath won't beat McConnell either, and the liberal voters across the country who keep sending her checks might as well be investing in Nigerian princelings' online banking schemes. At least Tennessee voters will face a strikingly clear moral and ideological choice — one that's likely to galvanize Black voters in Memphis, Nashville and Chattanooga and could lead to down-ballot local victories.

As I wrote six weeks ago, it's high time for "Democrats to quit pretending that the progressive uprising that began with the 2016 Sanders campaign is a delusional and dangerous Marxist white-boy cult, or simply a fluke." But a distinctive pattern has become clear since then: When establishment Democrats are paying close attention and have a large canvas to work with — as on Super Tuesday, or in a high-visibility statewide campaign — they can control the media messaging, turn out more moderate voters and generally achieve the desired result. At the more granular, retail-politics level of congressional districts, state legislature seats and local races, establishment candidates are highly vulnerable to grassroots activist campaigns.

None of this is a brand new discovery: That's exactly how evangelical Christians and other right-wing groups built a power base within the Republican Party, eventually driving out the party's Northeastern country-club "liberals" and forcing the so-called GOP mainstream sharply to the right. For decades, observers have suggested that a similar conflict within the Democratic coalition was inevitable, especially as party leaders sought to split the difference between their own voters and the increasingly intransigent and delusional Republicans.

I don't think the confusing results of Democratic primaries reflect a fundamental contradiction, exactly. It's more like a rapidly changing political dynamic, or perhaps a dialectic. In the year of the coronavirus pandemic, the Black Lives Matter uprising and the implosion of the Trump presidency, people view entrenched power with enormous suspicion and yearn for something different — however well or poorly defined. In that sense, the same forces that have positioned Joe Biden and a bunch of mainstream Senate candidates for a sweeping victory this fall have also endangered dug-in down-ballot Democratic incumbents across the country.

For months, politicians and the mainstream media told us there was a contradiction between controlling the coronavirus and "saving" the U.S. economy. As my Salon colleague Amanda Marcotte has repeatedly observed, this was always a bogus dichotomy: Forcing open the doors of Buffalo Wild Wings and Bed Bath & Beyond will not spark any kind of economic recovery amid an uncontrolled pandemic that has now killed — I have grown used to looking up the number every day — more than 162,000 Americans.

It's also no contradiction that a year when most Americans have spent most of the last five months inside their homes has also witnessed the biggest explosion of street protest since the Vietnam War. Conservatives have seized on this as evidence of America-hating libtard hypocrisy, but that's based on the brain-dead assumption that leftists or progressives liked being cooped up indoors, and had some sadomasochistic desire to see that continue indefinitely. In fact, the George Floyd killing and the broader issue of institutional racism triggered an uprising that was only partly about those things, but was also an outpouring of anger at the Trump administration's tragic mishandling of the pandemic, its rampant bigotry and corruption, and its efforts to undermine democracy and tip the country into discount-store fascism.

So do Americans want to go "back to normal," whatever that means, or do they want to tear down the entire system and rebuild anew? Well, different people want different things in different contexts, obviously — but on a more global and historical scale the only possible answer to that question is yes. All the contradictions of 2020 have revealed an immense appetite for change: That is both exciting and dangerous, and offers more reasons for hope than we've had in decades.