Jerry Falwell Jr. is the true face of white evangelicals — and dumping him changes nothing

After Trump, the right doesn't need to hide behind the Bible. Why even pretend to care about Falwell's antics? 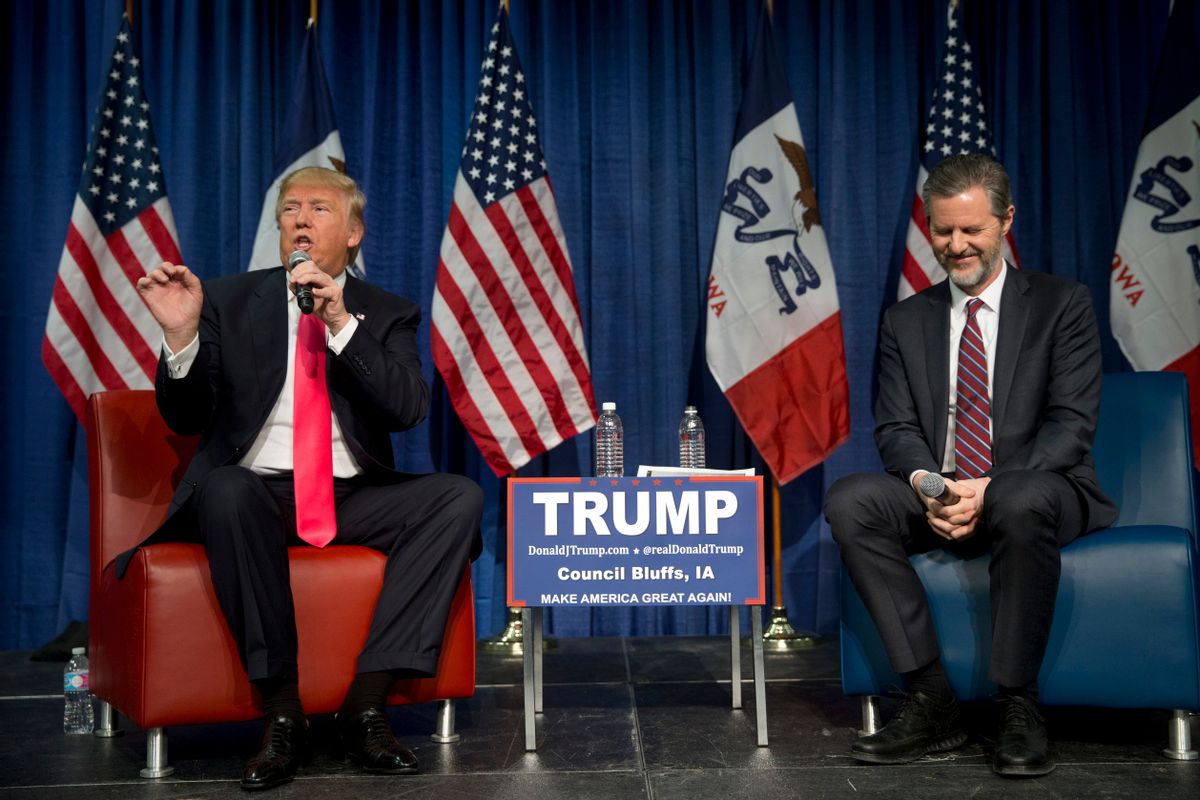 One has to imagine that for Jerry Falwell Jr., things feel very unfair right about now. For more than four years, the world of right-wing American Christianity has not only lined up behind Donald Trump — a thrice-married chronic adulterer who bragged on tape how he likes to "grab 'em by the pussy" — but has embraced him as if he were the second coming. White evangelicals' devotion to Trump didn't wane after he became president, even in the face of stories about Trump paying off a porn actress and a centerfold model to stay quiet about his compulsive cheating on his third wife. Nor was there any angst on the Christian right over Trump's relentless grifting or his efforts to blackmail the Ukrainian president into bolstering lies about former Vice President Joe Biden.

On the contrary, the Christian right's worshipful attitude toward Trump has only increased over the years, with pastors comparing Trump to Jesus himself and calling Trump "God's chosen one." The president's approval with white evangelicals remains strong, at 72%, and 82% say they plan to vote for him.

With all this Christian love for a president who makes all ordinary sinners look like amateurs, it's no wonder that Falwell — the president of Liberty University, which was founded by his dad, the legendary Southern Baptist pastor and televangelist — thought it was no big deal to unbutton his pants a little. But when Falwell posted a photo on social media of himself partying on a yacht with those literally unbuttoned pants, holding something that resembled an alcoholic beverage and with his arm around the waist of a pregnant female acquaintance with her shirt rolled up, he did not get the Trump treatment.

Instead, Falwell was asked to take an indefinite leave of absence from his job at Liberty University, the right-wing evangelical institution in Lynchburg, Virginia, that his father, Jerry Falwell Sr., founded in 1971. On Tuesday, the school announced that Jerry Prevo, chairman of its board of trustees, would replace Falwell as acting president.

The photo itself, if we're being honest, was hardly "racy," as some outlets called it. It looked no different from any other photo of people at a social gathering acting goofy after a few drinks. Still, this was apparently the last straw, after a year of reports that Falwell was getting up to precisely the kind of antics for which Trump apparently gets a permanent pass.

Last summer, a series of titillating stories about the Liberty president, including a report that Falwell and his wife had lavished financial favors on a "pool boy" half their age they met while partying in Florida. Falwell also reportedly emailed photos of his wife in a French maid costume to an employee, later claiming that was an accident and he'd meant to send the photos to her personal trainer. This raised more eyebrows, however, since the personal trainer is another good-looking younger man whom the Falwells have helped financially. Other photos of the Falwells partying in a Miami nightclub in 2014 were published last year.

Giving Falwell the boot only after he embarrassed the evangelical community in public only reinforces the main takeaway from this story: The supposed morality of white evangelicals is largely a facade, propped up in order to justify the Christian right's real purpose, which is to defend white supremacy and male dominance. It's worth asking why anyone would bother to keep up the facade, now that Trump has proved right-wing America doesn't need to hide behind the Bible and the cross to defend its true agenda.

Before Trump, it was actually a pretty good racket that white evangelicals had going. As Robert P. Jones of the Public Religion Research Institute writes in "White Too Long: The Legacy of White Supremacy in American Christianity," his book on the racist history of much of American Christianity, "most white Christian churches have protected white supremacy by dressing it in theological garb, giving it a home in a respected institution, and calibrating it to local cultural sensibilities."

Piety can give cover to racism by positioning white evangelicals as morally superior. By policing sex and prohibiting the pleasures of gambling, partying, drinking or even dancing, white evangelicals can craft a narrative where they are upright guardians of virtue, rather than mean-spirited racists who organize — in distinctly un-Christ-like fashion — to preserve their privileges at the expense of people of color. Indeed, the more white evangelicals defended a racist social order, the more effort they put into portraying themselves as "virtuous" by the way of strict rules governing individual behavior.

It's the same story with white evangelicals and sexism. The prohibitions on premarital sex, contraception, abortion and divorce mainly serve to control girls and women, channeling them away from living independent lives and keeping them under the thumb of one man or another, first a father and then a husband, for their entire lives. Whenever feminists criticized evangelical misogyny, the Christian right defended itself by claiming that its sexist ideology flowed from "faith," when in reality, it was the other way around: Male supremacy was the core belief, and religious faith was used to rationalize and justify it.

One of the remarkable developments in the age of Trump has the collapse of any meaningful need for all this Bible-hugging to defend bigotry against people of color, women and LGBTQ people.

Oh, Trump sometimes loves to wave a Bible around, though always with an awkwardness that suggests he's afraid it may burn his fingers. But it's unclear that anyone is fooled. With his ham-fisted and sloppy fake piety — and his obvious ignorance about all religious or theological questions — Trump illuminates a fundamental truth about right-wing Christianity, which is that it's largely a cover story used to defend the otherwise indefensible.

As I argue in my book, "Troll Nation," the true innovation of Trumpism is a kind of asshole pride, the collective conservative realization that there's no longer any need to pretend to be moral or virtuous or even to care about other people. It's become a time to embrace playing the role of the villain.

For the modern conservative, "triggering the liberals" by being a jerk is the highest calling, and "political correctness" is the slur directed at anyone who tries to harsh their vibe by suggesting that overt racism and sexism is uncool. Their president is a witless wannabe insult comic, and the more that Trump resorts to flinging childish insults, the more his supporters love him. Ours is an era where conservatives deliberately go to the grocery store without masks and film themselves harassing minimum-wage workers who are trying to enforce basic public health rules, so they can glory in what massive jerks they are. Their entertainment comes from crude right-wing shock jocks in the Rush Limbaugh tradition. Trolling liberals — for example, by awarding the odious Limbaugh the Presidential Medal of Freedom — has replaced pious posturing as the lingua franca of American conservatives.

In other words, the American right no longer feels any need to justify their will to power with over-the-top moralizing. Dominance has become its own justification.

So it's not surprising that Falwell got a little lackadaisical about pretending to believe all that crap he's been preaching about the virtues of sobriety and chastity. And more than a little dopey that the board of Liberty University is trying to act offended and going through the ritual of asking him to step aside. The notion that the religious right is motivated by "morality" and "faith" was blown to bits the second they bet their future on Donald Trump. Their massive hypocrisy has been permanently exposed, and dumping one prominent figure to save face won't change that.