Trump signed an executive order supposedly protecting renters from eviction. It doesn't appear to do that 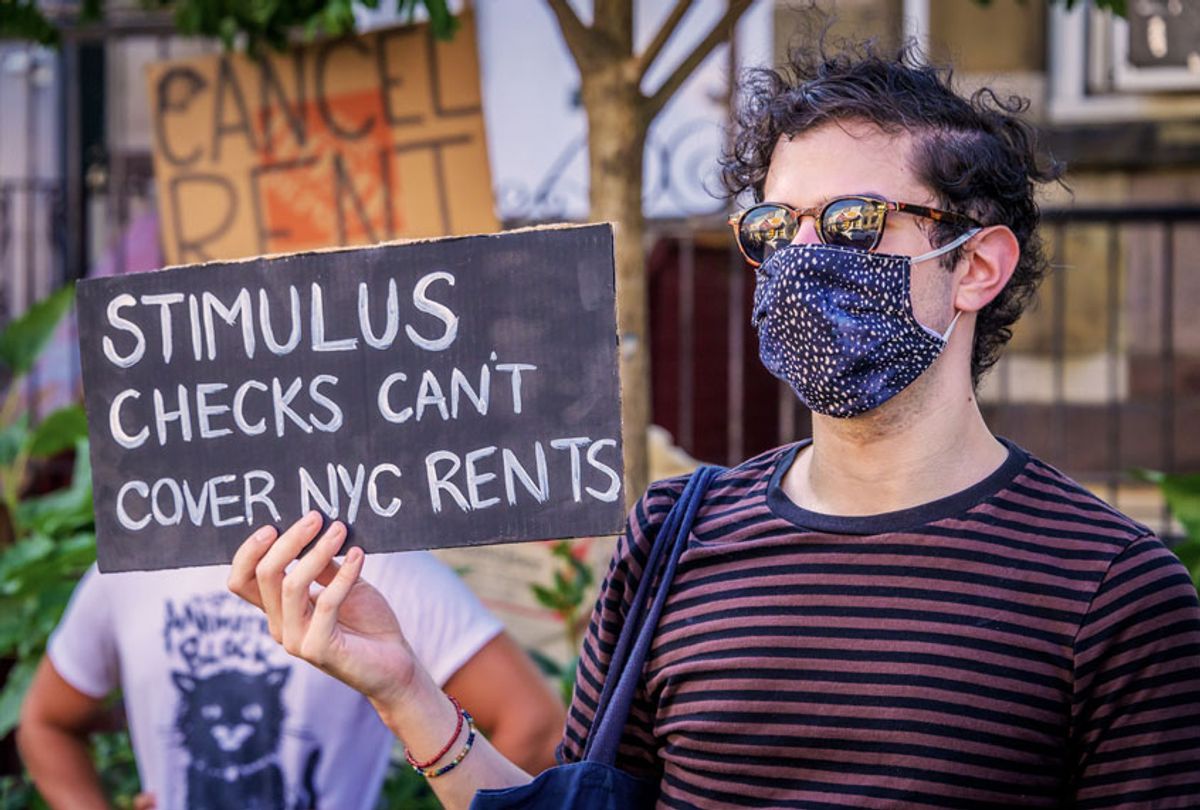 A participant holding a sign at the protest. Tenants and Housing Activists gathered at Maria Hernandez Park for a rally and march in the streets of Bushwick, demanding the city administration to cancel rent immediately as the financial situation for many New Yorkers remains the same, strapped for cash and out of work. (Erik McGregor/LightRocket via Getty Images)
--

President Donald Trump issued an executive order on Saturday that he claimed would help American renters stave off the ongoing threat of eviction — a crucial need, given that economists predict 20 million Americans will face eviction by the end of September 2020.

Yet experts agree that Trump's order won't actually do anything.

While the CARES Act imposed a temporary eviction moratorium under certain conditions, that order has now expired. To remedy this, Trump's executive order, titled "Executive Order on Fighting the Spread of COVID-19 by Providing Assistance to Renters and Homeowners," instructs the Secretary of Health and Human Services and the Director of the Centers for Disease Control and Prevention (CDC) to examine whether possible measures temporarily halting evictions would be reasonably necessary to halt the spread of COVID-19.

The order also asks the Secretary of the Treasury and the Secretary of Housing and Urban Development (HUD) to find available federal funds that can temporarily help renters and homeowners, and instructs government officials to "review all existing authorities and resources that may be used to prevent evictions and foreclosures for renters and homeowners resulting from hardships caused by COVID-19."

The problem, experts agree, is that these actions largely consist of "recommendations" to different agency leaders — which fail to do anything substantive to help renters at risk of being evicted.

"My understanding is that it does not actually provide any protection at all from evictions," Dr. Jesse Rothstein, an economist at the University of California Berkeley, told Salon earlier this week. "It directs a couple of federal agencies are studying what they could do to protect you. That's the sort of thing you might have thought they would figure out before he issued the order, not afterward. But it was just to study. It isn't going to do anything."

The National Low Income Housing Coalition was similarly scathing, calling the order "an empty shell of a promise that does nothing to prevent evictions and homelessness and acts only to mislead renters into believing that they are protected when they are not."

They added, "This executive order is reckless and harmful, offering false hope and risking increased confusion and chaos at a time when renters need assurance that they will not be kicked out of their homes during a pandemic."

Noting that the executive orders were merely recommendations given to various federal agencies, and did not have the force of law, Dr. Richard D. Wolff — professor emeritus of economics at the University of Massachusetts Amherst — told Salon that "you have a situation here in which the federal government has chosen, not required by law but has chosen, not to put into effect — neither the president, nor the Congress — any kind of national universal eviction rule such as exists in many other countries and many other states below the level of national authority."

Wolff compared the eviction situation in America with that in France. As he notes, it is illegal to evict anyone in France between November 1st every year until March 31st, because of the threat of cold weather to the homeless. Wolff pointed out that Paris Mayor Anne Hidalgo has said no evictions are allowed between April 1 and October 31st — in effect, banning evictions semi-permanently, as that span covers an entire year.

"There ought to be that in the United States," Wolff concluded. "There is no such thing. What we have is a hodgepodge of state and local moratoria — and those are very interesting because what they do is they do not deal with the problem of unaffordable rent at a time when people's income is pinched. All they do is say that you cannot evict a person because they have not yet paid their rent. . . . but their rents are accumulating. And if New York City is any example — where I know a little bit about it in detail — landlords have already instructed their legal representatives to prepare the paperwork, so the minute it becomes okay in New York city to file the papers to get evictions, they will do so."