"Teenage Bounty Hunters": Dear Jesus, save us from these good Christian girls with guns 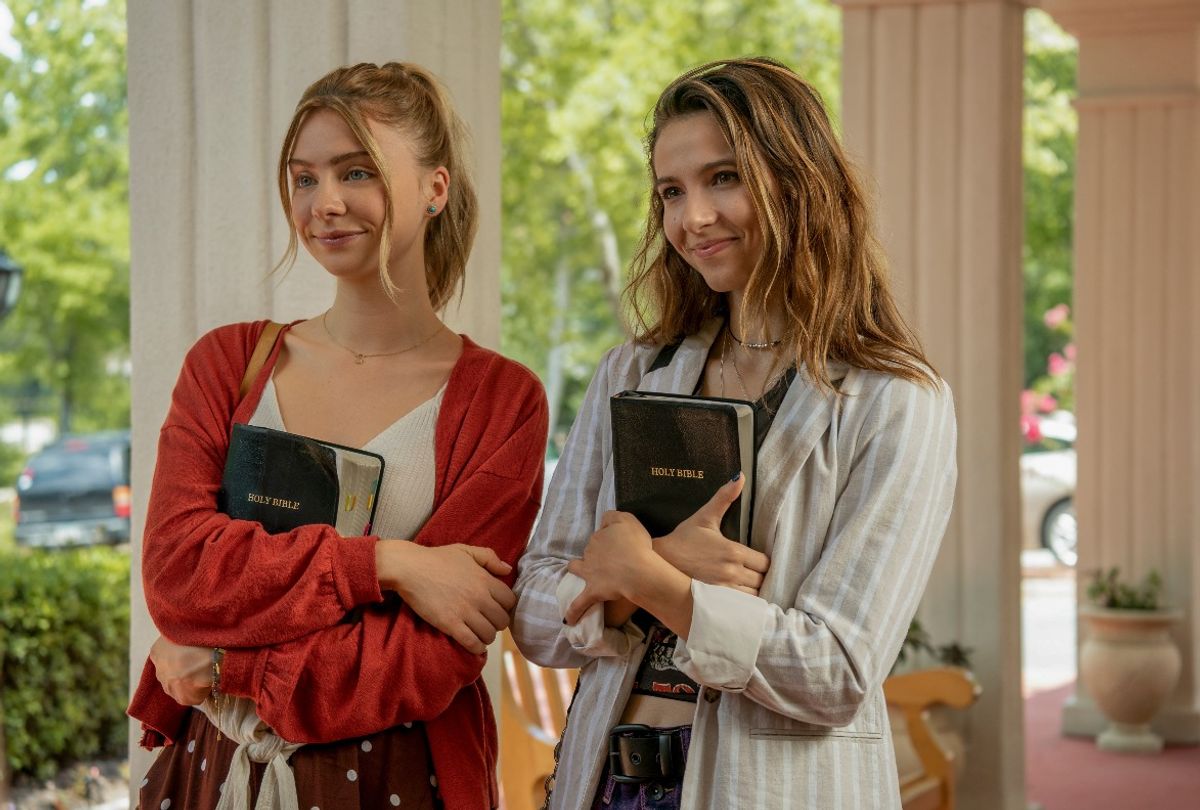 "Teenage Bounty Hunters" is one big lure. The title alone is enough to make a would-be viewer salivate – it vibrates with B-movie, Russ Meyer campiness. Even before a person finds out that it's about a pair of rich, Christian and ever so slightly ditzy fraternal twins who quite literally crash into the world of bounty hunting when they slam their daddy's truck into a bail jumper, a large segment of the viewership is primed and ready to binge all 10 episodes.

Then again the amount of enjoyment this show offers a person really depends on what perspective you bring to it. You'll get an idea of whether this show is for you from the moment Sterling (Maddie Phillips) and Blair (Anjelica Bette Fellini) Wesley respond to the fugitive pulling a gun on them by flexing their more impressive firepower: one shows off the pump-action shotgun that they just happen to be carrying in the truck, just because. The other brandishes the pistol in her purse.

Bear in mind that this happens before Bowser Jenkins (Kadeem Hardison), the bounty hunter actually in pursuit, reluctantly agrees to take them on as apprentices. They're armed, bubbly, Jesus-loving kids desperate for excitement, even though this inciting event occurs mere minutes after Sterling bangs her true blue dolt of a boyfriend Luke (Spencer House), talking him out of his abstinence pledge by quoting scripture.

This could've come across as cheap camp, but Phillips and Fellini handle these interactions and the rest of what comes afterward with a sense of genuine lightheartedness, owning the full-fledged adorableness of these sweet 16-year-olds. What may be the series' greatest achievement, though, is series creator Kathleen Jordan's considerate treatment of conservative evangelical Christianity.

This is a community she knows well, having grown up in a community like the suburban Atlanta one depicted in "Teenage Bounty Hunters" – a locale where verdant streets and ample manses are taken for granted as a birthright. Sterling is the picture of a good girl: blonde and virginal looking, respected enough by her peers to be named that year's worship leader in the school's Bible study group.

The choice to make her the twin that has sex outside of the confines of marriage is inspired, but not because it goes against the projected expectation that Blair, the dark-haired fan of industrial electronic metal, would be the one to ford that wilderness first. Instead, writers use her sex and other treatments of sexuality across the season to show the encompassing and forgiving nature of Christianity as opposed to making an easy mark of unshakable faith and playing up elements of judgment and bigotry. Indeed, what depth exists in this frothy treat is experienced through its thoughtful depiction of faith in the lives and families of these girls.

To be clear, this is not why I couldn't stand this show.

Chalk it up to place, timing, and an overall fatigue with characters like Sterling and Blair. It's not the fault of "Teenage Bounty Hunters" or Jordan, or executive producer Jenji Kohan that this Atlanta-set show about a couple of gun-toting white Evangelical Christian cutie-pies premiered while people are marching with Ahmaud Arbery's and Rayshard Brooks' names on their lips, the former having been hunted down by gun-toting private Georgia citizens in a truck, the latter gunned down by Atlanta cops.

It couldn't be helped that it enters the Netflix stream around the same time that blonde, self-identified Christian congressional candidate Marjorie Taylor Greene, a racist, antisemitic, Islamophobic QAnon believer, bubbled up into the headlines because she won her district's Republican primary.

Most viewers probably aren't thinking about any of that. Those who are might be taken aback at that first scene showing these good girls with their guns, even though the perp is white, and realize they're the ones we're supposed to be cheering on for 10 hours.

Bowser isn't white, of course, and the writers acknowledge that Blair and Sterling gain a lot of satisfaction (and cuteness points) by assigning themselves as his white saviors. Hardison's gruff performance compensates for a lot of the show's sins although his character's development receives short shrift; at least he speaks aloud what any annoyed viewers may be thinking.

Once those real-world social irritants lodge themselves in the brain, though, a person may not be able to ignore the series' escalating points of tone-deafness. Where to be begin? There's the almost entirely white student body at Blair and Sterling's school, or the almost entirely white church community of which the twins' parents Debbie (Virginia Williams) and Anderson (Mackenzie Astin) Wesley are pillars.

This in Atlanta, a city with a Black population hovering near 35%, and despite what "Atlanta" may show us, enough wealthy folks reside within its city and suburbs to send, I don't know, more than one or two children of color to private schools.

There's the fact that nearly every Black character in this series operates in some version of a subservient role to these girls and their families, the exception being Cliff "Method Man" Smith's Terrance Coin, Bowser's fitter and more charismatic rival who turns his jobs into fodder for his YouTube channel. Although one of these characters, Blair's love interest Miles Taylor (Myles Evans), holds a card in his pocket engineered to blow apart our initial assumptions about him, he's still a country club valet.

That's more excusable than the near absence of Black women in this series, and save for a pair of targets Sterling, Blair and Bowser have to hunt down – one a stripper, the other an activist slicing heads off of Confederate statues – none of them have many lines, if any at all.

About that activist: whatever possibilities there might have been by tossing that storyline into the mix aren't explored with any approximation of thoughtfulness beyond Blair mentioning her admiration for what the woman is doing as a tool to politically differentiate her in the viewer's mind from the rest of her Republican family.

Even Bowser's main employee at the yogurt shop that supplements his bounty business mostly lurks in the background wiping tables and rarely speaks more than five words at a time.

Each of Bowser, Blair and Sterling's skips serve as plot devices enabling the girls and Bowser to discover something about themselves, but in a show that explicitly and tacitly recognizes the racism in this country club community, it is baffling, to say the least, that the series passes up the chance to exercise any daring with this politically and socially relevant subject.

"Teenage Bounty Hunters" isn't "Frontline." I realize this. But it's not expecting much to want characters treading similar spiritual territory as "Veronica Mars" and "Drop Dead Gorgeous" to be blessed with more wit than their creator saw fit to give them.

Looking past its cultural and social shortcomings will be easy enough for most people; believe me, I wish I could . . . and it could very well be the case that it'll play differently to viewers like me with a bit of time and distance from current circumstances. My present state of mind leaves me inclined to turn a blind eye and let this misfire slip past.