The surprising economic consequences of the coin shortage 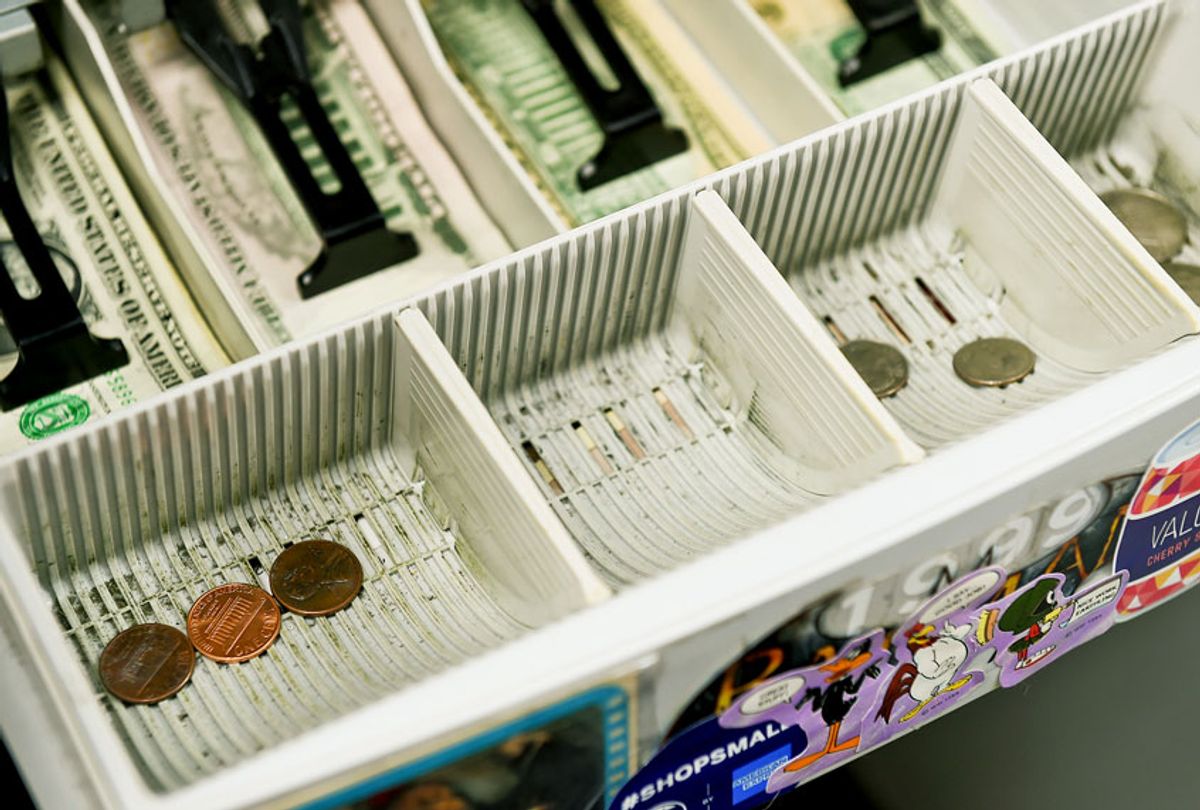 The detail photo of the change drawer of the cash register at Symbiote Collectibles in West Reading Thursday afternoon July 9, 2020. There is currently a coin shortage in the United States. (Ben Hasty/MediaNews Group/Reading Eagle via Getty Images)
--

As America continues to suffer an economic crash spurred by the pandemic, one of the unexpected economic side effects is a shortage in coin circulation. While a coin shortage might seem inconsequential, economists say that those most affected are likely to be the poorest Americans.

The cause of the coin shortage relates, indirectly, to the pandemic: As brick-and-mortar businesses closed due to quarantine, there was an inevitable decline in coin circulation, as fewer people were spending money. The coin shortage was exacerbated by the U.S. Mint decreasing its staff, which led to a further drop in available coins.

Now that businesses are starting to reopen, the demand for coins has drastically increased — but the supply of coins is simply not there to meet it.

"The most likely impact of it, I think is, is an increase in businesses going to the 'we only accept credit cards' cashless model, which is what you have in a country where everybody has access to a credit card or can pay by phone as Sweden does — or as, in fact, Kenya and even Somalia have everybody pay by phone," Karl Widerquist, an American political philosopher and economist at Georgetown University in their Qatar campus, told Salon. "If you have that, that's no problem, but it's a problem in the United States because in the United States, poor people very often can't afford pay by phone. It's actually very expensive."

He added, "We make it hard to get a bank account, hard to get a credit card, hard to pay by phone. So what these businesses end up saying is, when they say 'we're going to only sell without cash,' is that 'we don't want any poor people coming into the shop.'"

The Federal Reserve has implemented several measures to counteract the coin shortage, including announcing a Strategic Allocation of Coin Inventories in June and creating a temporary U.S. Coin Task Force in July that aims to identify the variables from the pandemic that have affected coin circulation and attempt to remedy them. In a statement last month, the task force argued that "many have referred to this as a shortage; however it is not. There is approximately $48 billion in coin already in circulation, most of which is sitting dormant inside America's 128 million households."

In other words, there are plenty of coins to go around — they're just stuck in jars and on dressers. The task force said as much: "As people have changed their spending habits, and coin-intensive businesses and financial institution lobbies have been less accessible, the nation's coin is pooling in change jars, in car cup holders and in shuttered businesses, making it difficult for the businesses of this country to get the coin that they need to support cash transactions." Hence, the coin shortage is a result of poor coin circulation, not production.

The U.S. Coin Task Force's proposals included encouraging consumers to spend coins that they have at home, deposit their coins at appropriate financial institutions, use retail coin kiosks and promote the hashtag "#getcoinmoving."

This is not the first time that the US has faced a coin shortage. There were periodic coin shortages from the late-1950s through the mid-1960s, which the federal government remedied with the Coinage Act of 1965. That bill got rid of silver in circulating dimes and quarter dollars and reduced the amount of silver in the half dollar from 90 percent to 40 percent. (It was eventually eliminated entirely.)

"There have been coin shortages historically," Gabriel Mathy, a macroeconomist from American University, told Salon by email. "Ben Franklin talked about how gold and silver coins (specie) were in short supply in colonial America as the coins were used to pay for imports, and so tended to be insufficient for the needs of domestic commerce.  The colonies often printed their own paper money to try to alleviate this shortage and pay for government spending (wars mostly)."

The Civil War also led to a number of coin shortages, Mathy noted, because the gold standard was suspended and coins were often hoarded or sent abroad. Government-issued stamps were used instead of coins in many cases.