The ad also appears to suggest that Sen. John Cornyn has eased back on his hardline demands for in-person learning 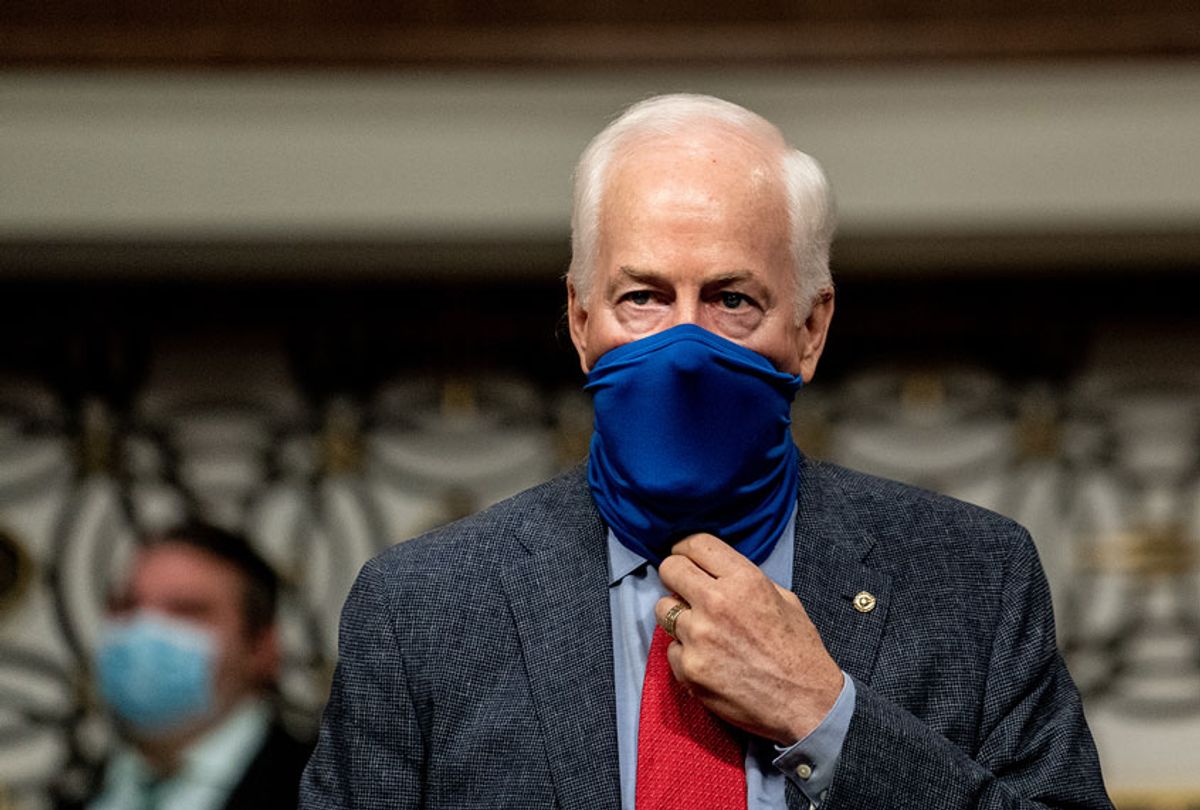 Sen. John Cornyn, a Texas Republican up for re-election this year, posted an ad over the weekend touting his dedication to safely reopening schools in the Lone Star state, which appears to use stock footage of a classroom halfway around the world in Estonia.

The 30-second spot, called "Cares," is meant to foreground the lengths which Cornyn has gone to in order to re-open schools safely.

It opens with "Becky," a blonde Austinite wearing a Longhorn-red blouse, who tells viewers, "I'd like my kids to learn sitting in the classroom with their friends — the sooner the better."

"But only after it's a safe place to be," she adds, as the scene then cuts to a cool, blue Estonian classroom setting, where a young teacher lectures students while walking an aisle between desks.

"John Cornyn gets it," she continues. "He got money right to the local school districts so they could provide a healthy environment. "

Cornyn, wearing a Texas flag mask, takes over. "We need to do everything we can to ensure that our schools are safe," he says. "Then we can get our kids back in the classroom."

The classroom footage uses stock content from Estonian company Gorodenkoff Video Productions, which sometimes films in its own studios on sets it designs and builds. The company's website reads:

Gorodenkoff Video Productions is a team of Stock Content Creators united in one studio. Our company is based in Estonia, small European country that's renowned for its love for technology and all things digital, so are we. We gathered a team of like-minded professionals; people with inexhaustible imagination, and desire to create new stories, situations, and narratives that can be used by our dear customers all over the world.

Sometimes we think that the real world is not enough so we build our own sets, so we can shoot familiar surroundings but look at them from a different, more interesting angle.

Estonia has as about one-third as many COVID-19 cases in total as there were new cases in Texas only yesterday, according to data compiled by the Johns Hopkins Coronavirus Resource Center. Adjusted for population, Estonia has about 14% the total COVID-19 death rate as Texas.

In a July 9 TV interview, Cornyn, who has recently been called out for not speaking to the press, falsely said it was unclear whether children could catch and transmit COVID-19, as well as that no one under 20 years old had died of the disease.

"The good news is when you look at the numbers, no one under the age of 20 has died of the coronavirus," Cornyn said. "We still don't know whether children can get it and transmit it to others."

That day, Texas reported more than 550 COVID-19 infections in children 9 and younger, according to a Houston Chronicle fact-check.

At the time, PolitiFact rated Cornyn's claims "false," citing national and state data. A 17-year-old girl in Lancaster died in April of complications related to the coronavirus, per the Dallas Morning News, and Corpus Christi-area councilman Ben Molina reported officials had logged "a COVID-19 related death of a 6-week-old infant" the day after Cornyn's statement.

PolitiFact also pointed out that in Texas, "about 7% of the 24,459 coronavirus cases with a completed investigation have been people under 19 — 2.3% have been people under 9 and 4.8% between 10 and 19." At the time of the interview, the CDC reported that 29 people under the age of 14, and 142 people between the ages of 15 and 24, had died nationwide after contracting the disease.

Cornyn — who finds himself in an unexpectedly tight race against newcomer M.J. Hegar, as Democratic nominee Joe Biden's polls rise in the Republican stronghold — has repeatedly pushed to reopen schools, citing social and economic side effects. In an Aug. 4 interview, the senator said limiting schools to distance learning would place "an extraordinary burden on low-income families."

The three-term incumbent supported a recent Senate bill, which provided $70 billion to educational institutions but withholds two-thirds of those funds if those schools do not incorporate in-person instruction — something which schools in many parts of the country have decided is unsafe for now.

The script suggests that Cornyn — who once said he blamed China for COVID-19 "because (of) the culture where people eat bats, and snakes, and dogs and things like that" — has shifted his thinking to acknowledge that more work is needed before schools are safe enough to reopen for in-person learning.

In May, Cornyn supported Republican Texas Gov. Greg Abbott's decision to lift economic restrictions, saying that "we can't stay hunkered down in our homes forever . . . I think by doing this gradually with the proper safeguards is the right thing to do."

Cases and deaths in the state surged after the move. Epidemiologists at the University of Texas project that the state will see more than 13,300 deaths by Sept. 1.

Cornyn's office did not reply when asked about the new ad or possible policy shifts.