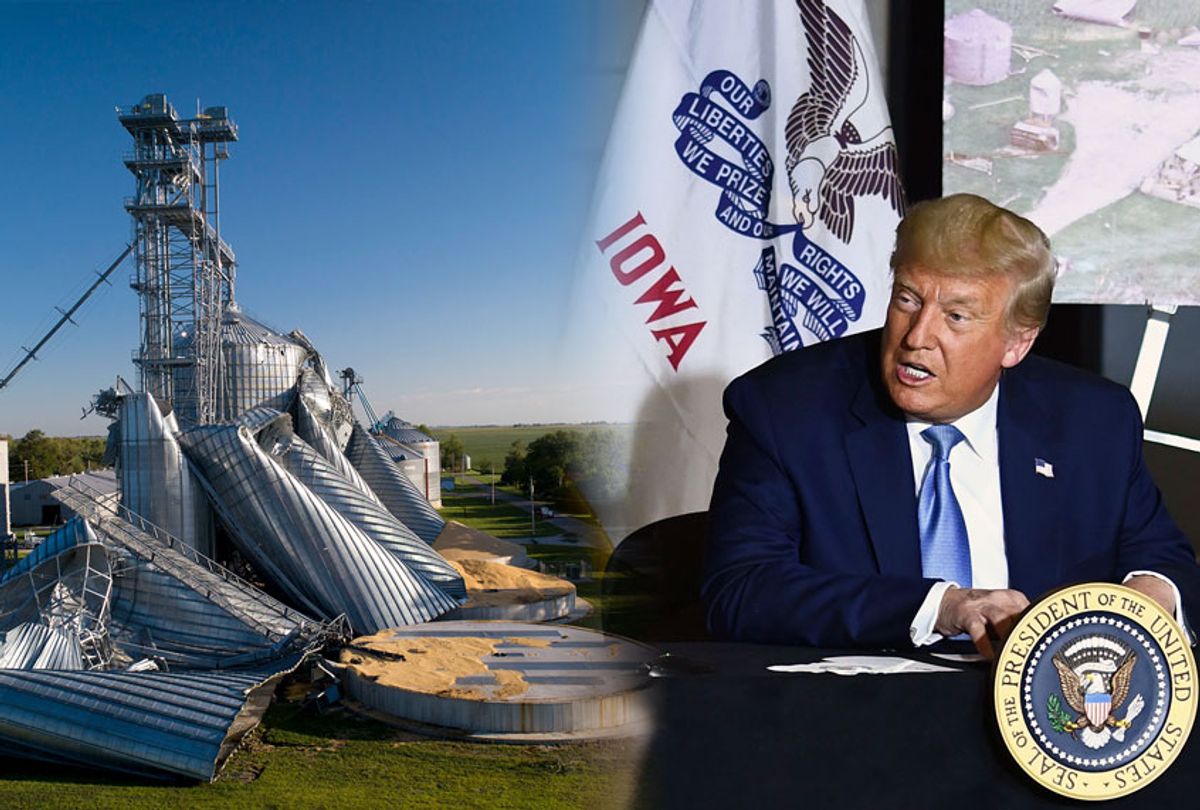 We were still without electricity or internet on Friday morning, four days into riding out the aftermath of the hurricane-level "derecho" storm that devastated a 770-mile swath of the heartland from South Dakota to Ohio, and left a million residents without power, along with widespread damage.

It also left an estimated 40% of Iowa's corn crop in ruins, flattening millions of acres and the state's key economic generator in a matter of minutes.

We were the lucky ones.  In his 30-minute briefing at an Iowa airport on Tuesday, President Trump didn't bother to tour the storm damage in Cedar Rapids, where tens of thousands of residents have remained without power, water and shelter, camping in tents along the streets as extreme weather refugees in an undeniable humanitarian crisis.

This includes African and Southeast Asian immigrants in Cedar Rapids who have been displaced from their own countries as climate refugees.

Despite Trump's Twitter claim that he has fully signed off on Iowa's presidential disaster relief request for nearly $4 billion on Monday, the White House has omitted any individual assistance for homeowners, thousands of whom took damage to their homes, according to FEMA officials.

Only days away from starting school in one of only two states in the union without a mask requirement, the image of my son standing alone on the side of a battered street was not only a reminder of the precariousness of our times beyond our current crisis.

Gov. Kim Reynolds, a Trump-loving Republican, inexplicably waited an entire week after the derecho leveled mile after mile of the state to formally request presidential disaster relief. That served as a stark reminder of the state's and the nation's blundering inaction on the dual crises of COVID-19 and climate change facing my son's generation.

While Iowa continues to falter in its COVID response, declared as a "red zone" by an internal White House coronavirus task force report last month, the climate strikers have refused to attend school on Fridays for more than a year as a way to call out our state and nation's failure to to declare a climate emergency.

Their motto, inspired by Swedish climate activist Greta Thunberg: It's time for leaders to act on science, and treat all crises as a crisis.

A term coined in the 1880s by a University of Iowa scientist, Danish immigrant Gustavus Hinrichs, as a "straight blow of the prairies," the derecho is also a devastating rejoinder to our nation's business-as-usual policies — be it a flawed response to the COVID outbreak, or the stunning inaction to the unfolding climate crisis — that adapting to a failed system is not "adaptation." It's failure.

Instead of failing our children — or allowing the failure of policy-makers in Iowa and in Washington to place our children on the edge of becoming a lost generation — perhaps it's time to hit the pause button, pull our kids from school and focus full-time on climate solutions.

The derecho didn't just level our state. It leveled our confidence in statewide and federal leadership.

That may sound hyperbolic, but as teenagers in a family that has personally experienced the pandemic, as well as historic flooding, fires and catastrophic storms within their brief lifetimes, my kids recognize that they are living in age of potential environmental collapse — and it's terrifying.

Their response, as climate strikers, is incorrigibly defiant: School can wait — most schools in Cedar Rapids have been severely damaged. Adults first need to deal with the COVID and climate crises.

"We teenagers and children shouldn't have to take the responsibility," Thunberg told our town last fall, when she joined my son's climate strike in Iowa City. "But right now the world leaders keep acting like children and somebody needs to be the adult in the room."

I'm not sure the adults in the room were listening.

In defiance of the Paris climate agreement, the Trump administration continues to roll back environmental regulations, including recent methane leakage rules for gas and oil companies. Here in Iowa, despite record production of wind energy, greenhouse gas emissions rose by 3.3% last year as our state went through three historic floods and record heat waves and fires swept from the Arctic to Australia to the mega-droughts of the American Southwest.

Three months ago, our children watched in astonishment as Gov. Reynolds was recognized at a special White House celebration for "turning the corner" on COVID cases, in the same week that a single slaughterhouse in nearby Waterloo, Iowa, recorded 1,300 coronavirus cases and several deaths among its workers, an outbreak that remains among thee nation's worst.

In the state that has the highest per capita rate of COVID cases in the Midwest, with 50,000 cases and nearly 1,000 deaths among just 3 million residents, is it not failure to send our kids to school in the coming days? Their local school district should still be considered unsafe, according to a recent Times Opinion analysis based on guidelines from the Harvard Global Health Institute, since it consistently records more than 25 cases of COVID-19 per 100,000 people.

Not according to Reynolds, whose "Return to Learn" mandate sets benchmarks for shifting to online learning at three times the rate of COVID positivity recommended by the World Health Organization. Reynolds rebuked an AP reporter earlier this month for "scare tactics that's being laid out by the media," after he asked her about school board and teacher concerns over contracting the virus. A few days later, an AP report uncovered a "horrifying data glitch" in COVID data collection in Iowa, finding that the "Iowa Department of Public Health has inadvertently been reporting fewer new infections and a smaller percentage of daily positive tests."

It gets worse, according to our kids.

The derecho was not the only climate phenomenon this past week: As Death Valley in California set a record at 130 degrees Fahrenheit — possibly the highest temperature ever recorded anywhere on the planet — the last fully intact ice shelf in Canada collapsed, and scientists declared that Greenland's melting ice sheet has reached a point of no return. Millions of people have been displaced by flooding in China, India and Yemen in the last month, just as a new report was released that our kids have lived through the hottest decade in human history.

"We strike because 11,000 scientists warned of 'untold suffering' if we fail to act quickly on our climate crisis," my son wrote in the university newspaper last winter, citing a global "Declaration of Climate Emergency" that was largely overlooked by our political leaders.

When Wall Street consulting firms like Moody's Analytics warn the nation that impending climate change could result in a loss of an unfathomable $69 trillion during my son's lifetime, it's time to act on such warnings in a new way.

We need climate schools, not COVID schools, that reflect the realities of 2020 — not the antiquated policies of the past.

Our kids need to learn where their electricity comes from, visit solar farms and wind turbines, and see the importance of transitioning to renewable energy and a smart grid, instead of relying on 20th-century coal-fired power plants.

Instead of rushing our kids into knowingly unsafe schools for the first trimester (seven weeks), we should work with youth in our heartland communities to replant trees, especially in towns like Cedar Rapids, which has now lost 50% of its tree canopy.

In an agricultural state that still imports 90% of its food, we need to visit farms and learn about regenerative agriculture initiatives to save our soil and protect our quality, and even restore native prairies — 99% of which have been destroyed in Iowa.

With the inevitable delay and suspension of classes in schools across the nation this fall, why not have our children and schools focus on a curriculum of climate change from the growing pools of resources from scientists, climate experts, journalists, storytellers and artists, and the experiences of those in frontline communities?

Climate scientists are begging to be heard.  With the Big Ten football season canceled, perhaps we can finally listen to them with the magnitude they deserve, as if a collapsing ice sheet were as important as watching grown men chase a pigskin in a stadium.

How much more outrageous is this proposal than sending our kids into incubators and chaotic hallways of the COVID virus?

How more irrational is this proposal than sending our kids to school at all, as the climate crisis unfolds before their eyes?

As celebrated theorist Buckminister Fuller concluded: "You never change things by fighting against the existing reality. To change something, build a new model that makes the old model obsolete."

Or, as my son says on his street corner every week, climate strike sign in hand: Wake up, Iowa.