"Carter was so humane": "Desert One" filmmaker on examining the Iran hostage crisis 40 years later 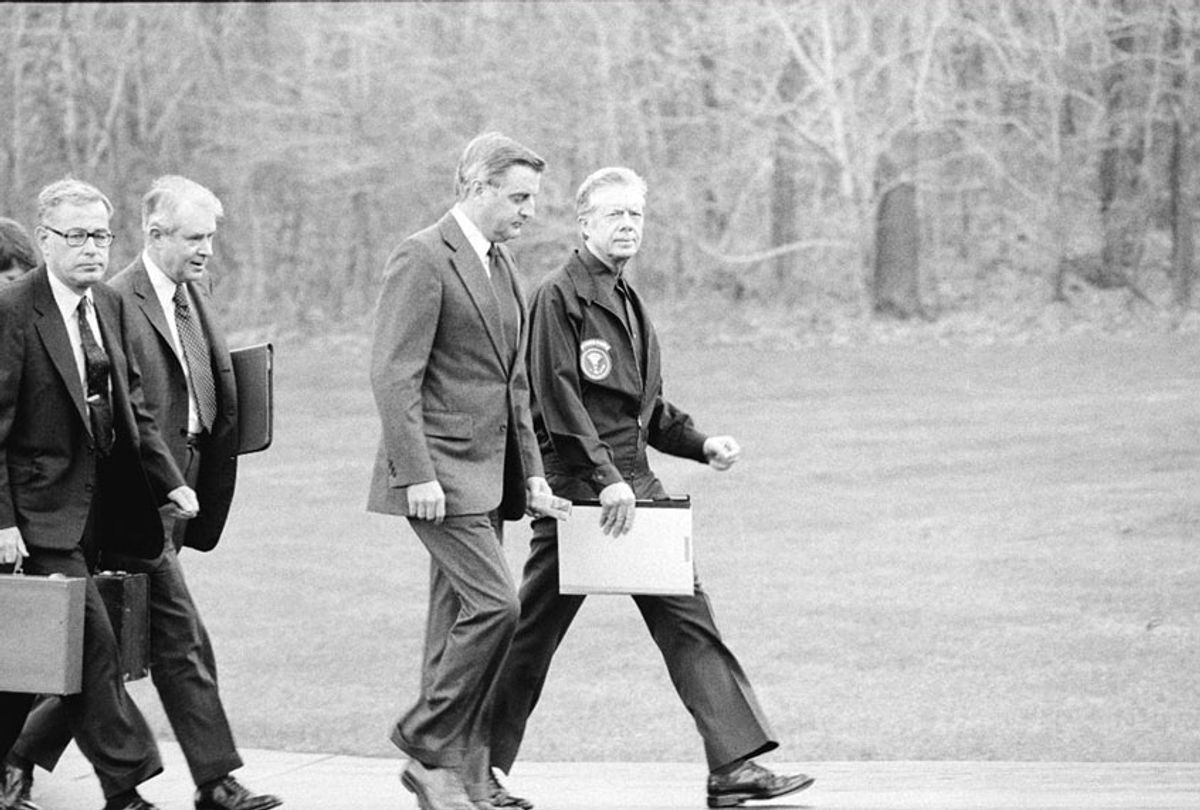 Oscar-winning director Barbara Kopple's gripping documentary, "Desert One," provides a new look at the 1980 rescue mission to free the Iran Hostages. The film briskly recounts the history of U.S.-Iran relations, beginning with Imam Khomeini taking power in February 1979. The Shah of Iran left the country, eventually arriving in New York for medical treatment. Later that year, Iranian students, angered by the United States' refusal to return the Shah to Iran, occupied the U.S. embassy in Tehran, and took 52 Americans hostage.

While President Jimmy Carter emphasized a diplomatic approach with a focus on "peace and human rights" so as to avoid American deaths, Iran was unwilling to negotiate. Meanwhile, a classified, volunteer military operation was formed to plan a rescue attempt.

Kopple deftly chronicles the noble but risky effort, deemed "the most audacious, difficult, complicated rescue mission ever attempted," by a co-pilot in "Desert One." Animation shows what happened on the ground at Desert One, where a series of unexpected events occurred. Using interviews with President Carter and Vice President Walter Mondale along with the hostages, military personnel, and their wives and children — Kopple unpacks what transpired and why, as well as the impact the special ops mission had.

Kopple spoke with Salon about her new film and her thoughts on the event 40 years later.

Do you think Carter acted appropriately in his decisions as the crisis unfolded?

I feel that it's always good to take a humanitarian point of view and be diplomatic as long as you possibly can. It certainly didn't work in this circumstance because Khomeini had it out for Carter, because of the Shah. All of the American presidents befriended the Shah, including Carter. Carter was giving [the Shah] a safe place to be when he was sick, and that provoked a lot of tension and made Khomeini not want to deal with Carter at all. To me, Carter was so humane and so incredible and such a good man. One of the great things that happened was that many of the men on the mission and those held hostage saw the film, some of them said, "We didn't respect Carter then, but after seeing the film, now we do. We understand." That made me feel really good that he could be portrayed in such a good way. That people could get him and understand him.

How did you secure the interview with Carter?

Carter was not an easy interview to get. It took me three months, and they said that I had to call the Carter Center and speak to a man named Phillip Wise. He never called me back. I'd leave messages on his answering machine and I decided to have a relationship with his answering machine. I called every three to five days and told him what I was filming and how important Carter was. He then he called and said, "We decided we're going to let you film. Can you come on February 14 and we'll give you 20 minutes." I was ecstatic and said, "I'll take it!" I found the best chocolates for President Carter and a necklace for the First Lady, with a red heart and crystals, that I got when I was filming in South Sudan. It was so incredible to interview him on this because he doesn't talk that much about this particular situation.

What are your thoughts on how the mission unfolded?

I'm not a military person. There were so many moving parts to this mission, so I don't know.

I see the film as a thriller, so hopefully, many people don't know this history and will sit on the edge of their chair and not know if they will make it or not.

How did you process all of the information — the interviews, the news footage, the politics, and the humanity — to tell this story the way you did? You even include a fantastic clip from Iranian TV showing how to use an automatic weapon!

The interesting part is our animator [Zartosht Soltani] — we used animation because the mission was secret — was Iranian. His family left Iran, and he grew up in America. He would spin tales to us of what it was like to live there during that time and he really understand the history and topography. We had a wonderful team, Eric Forman who did the archival research and Dave Cassidy, they made sure that we were putting in was exactly as it should be. They just researched and researched so the helicopters looked like they were supposed to and the C-130s looked like they would.

We got footage nobody had ever seen or heard before, like the satellite audio of Vice President Mondale and President Carter would be talking directly to the Generals to find out what was happening, so it made us feel you were experiencing it with them. We didn't want to leave a stone unturned. We wanted to make this into a film where the people on the mission looked at this and said [that] it was pretty close. "You did a good job." And they did.

One of the people on the mission, Taco, said, "I can't believe it! How did you do this?" We put our hearts and souls into it. I really got to know and like the Delta Force guys who were on the mission and the hostages. I thought they were incredible. The mission guys were willing to risk their lives to save their fellow Americans.

I kind of like the idea of these military men recounting their war stories. Capt. Wade Ishimoto is terrific when he describes shooting an oil tanker in the desert after the landing in Iran. Can you talk about the Delta Force officers you interviewed and their take on the mission?

Some of them really didn't want to talk that much about it. It's the one thing I think in their lives that has always been with them and it's always been powerful. Ken Bancroft weeps as he talks about what he experienced as well as many of the others. Each one was so ingrained in the kinds of work they did — whether they were running back into the fire to save someone, or what their job was on the mission. They got very sentimental about each other and what they did. They remember it as the biggest moment in their lives.

Likewise, the hostages' accounts are very moving, from recounting being handcuffed and even threatened at gunpoint, to John Limbert's efforts to play up and appeal to the Iranian's cultural sensitivities. Kevin Hermening's mother, Barbara Timm meets her son and later speaks critically of the U.S. was really powerful. What can you say about the difficulties of these men revisiting this painful chapter in their lives?

As far as the hostages are concerned, they felt the people on the mission are the heroes because they were the ones who went in and really struggled. The hostages were taken against their will. They just remained hostages. Kevin, he was the youngest person there. He just turned 20. He'd never been out of the country before. Here, on one of his first missions, going to Iran and being a marine who guarded everything, and he's this young innocent midwestern kid. He had no sense of what the bigger world was like.

His mother came to visit him [during captivity], and the way he expresses it is so incredible. They took his handcuffs and his blindfold off, and they brought him to a room. He heard some rustling near the door, and in walks mom. He wanted to know everything that was going on back in the States, but they had microphones. [Mother and son] were together for 20 minutes. Kevin was a great storyteller. I loved hearing the way he expressed himself.

Mike Metrinko was also very spirited. He doesn't take guff from anybody. One of the Iranians said something derogatory in Farsi, and Mike understood and called him, "The son of an Iranian whore," so the guy drags him and kicks him and bloodies him. Each one had their own individual, incredible story. John Limbert married an Iranian woman, and his dream is to go back there, and when he was released, and asked about how he felt about the experience, he said the Iranian people are really good people, they have a lot of culture and art. He hopes to bring his children to the place of their roots and their history. I thought that was very profound.

You not only give voice to the Iranians — interviewing Faizeh Moslehi, a female student who talks about having a sense of equality, to Mahmoud Abedini, an adult who was a preteen on a bus that the Special Ops forces encountered — but you also filmed with an Iranian crew and used an Iranian animator. Can you describe how the Iranians processed this event decades later?

I want to talk about the Iranian young boy, Mahmoud. The [Delta Force] thought when the C-130s and helicopters landed that this was a really safe place in the desert where they can arrange everything and there's this bus that's coming into their frame and it has this entire family on it going on vacation. The story of what happened is told through the eyes of an 11-year-old. He's not 11 anymore, but he almost spoke as if he was still 11 and seeing it through those eyes. He didn't know if would get out of there, but the reason he wanted to get out of there and be safe was so he could go to school and tell all his friends about this adventure that he had. That was so human — any 11-year-old would want to brag about what he witnessed. To me, that was key.

The other Iranians we interviewed were still very diehard about their anti-Shah feelings. What they did do was put together a place in Tabas, and they celebrate April 24-25 all the time as a celebration as how they "won" from the Americans who were not so tough. On the very same day at Arlington and at Hulburt Military Base, the Americans have a ceremony where they remember what the mission was like.

You hint at the Iran-Contra scandal that President Reagan traded arms for hostages, but overall, this is an inspiring, not cynical film, and it does have some resonance today. Why tell this story now?

It's the 40th anniversary this year. It's so hard to say because we have a president who has tried to do whatever he could to instigate some kind of war or power struggle with Iran today. I think that when the election comes, whenever the election happens, it would be an incredible thing for Americans to really look at the Iranian history, and for Iranians to look at the American history, and see if there is some way of coming together, and if there can be some hope because right now, it's very tense.

"Desert One" is available in select theaters and virtual cinemas beginning Friday, Aug. 21 and digitally/on demand on Sept. 4.