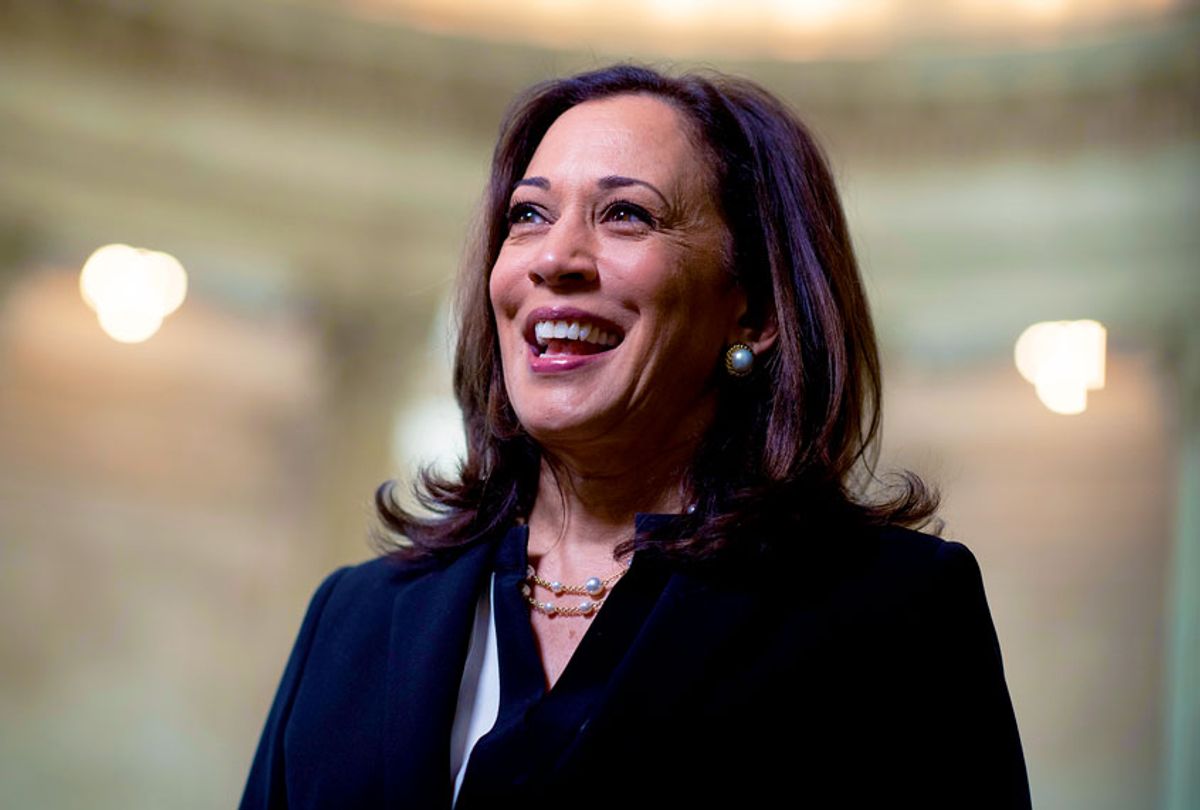 The official theme of the third night of the Democratic National Convention, the night that Sen. Kamala Harris of California accepted the nomination as Joe Biden's running mate, was "A More Perfect Union." It soon became clear, however, that the real theme of the evening was Ladies Night.

This convention has been geared towards women from the get-go — not only are women the majority of Democrats, they are the majority of voters, period — with female faces and issues that rate highly with female voters foregrounded. But Wednesday night went well beyond that.

The night was stuffed full of the lady luminaries of the Democratic Party: The first female Speaker of the House, Nancy Pelosi. The should-have-been-first female President, Hillary Clinton. The first woman to murder a billionaire live on television, Sen. Elizabeth Warren of Massachusetts. And of course Harris herself, the first Black woman and first Asian-American on a presidential ticket, and, as Democrats and sane people everywhere fervently hope, the first woman to occupy the role of vice president.

We even got a cheesy video about woman rebels, from the suffragettes to the Women's March participants, which perhaps was to be expected in the same week that the 19th Amendment turns 100 years old.

It's tempting to sneer and make accusations of pandering because, truth be told, most things that are marketed to women tend to be wrapped in maximum condescension. Paint it in pink, put some glitter on it, make it "sassy" and the ladies will eat it up, right?

But the truth is that the night was nothing like that. Instead, women were addressed not as pink-bedazzled materialistic morons, but smart people with a vested interest in important issues, including many that aren't traditionally coded as female. The issues that were highlighted on Wednesday — immigration, climate change, gun control, violence against women, child care — were clearly chosen not based on sexist assumptions, but actual research into the issues that women actually care about.

It set up the perfect tone for Harris, who will — if American democracy has any hope of survival — will be the first woman on a winning presidential ticket. (As Hillary Clinton reminded the audience, however, it's possible to "win 3 million more votes and still lose.") After all, the only way women — and especially women of color — will ever achieve full equality is to be taken seriously as full people on their own terms, without either erasing their gender or racial identities or being reduced to them.

When Harris took the podium, speaking to banks of video monitors in a nearly empty convention center in Wilmington, Delaware, she illustrated exactly how women's gender can inflect their perspective without reducing them to nothing but that.

"I've fought for children, and survivors of sexual assault. I've fought against transnational gangs. I took on the biggest banks, and helped take down one of the biggest for-profit colleges," Harris said, describing her time as California's attorney general.

"I know a predator when I see one," she added.

So-called "women's issues" are often bracketed off from other issues, as if they were boutique concerns that have no larger social relevance. But as feminists have long argued, and as Harris's "predator" line made clear, the same ugly forces that drive the oppression of women also reverberate throughout our society. The man who preys on women, as Donald Trump has bragged about doing, is the same man whose sadism and lack of empathy will lead him to destroy the environment, terrorize immigrants, wreck the economy and let a pandemic run rampant.

That mentality is why so much of the woman-centric programming on the DNC's next-to-last night was focused on subjects not traditionally understood as "women's issues," such as gun control and climate change. But, as politics in the post-"grab 'em by the pussy" era has shown, the same toxic masculinity that does so much direct damage to women also damages our economy, our public safety and, in the age of coronavirus, our ability to not to have virus spewed all over us by some jerk who thinks a mask makes him look like a girl. The remedy for this is to stop treating women like a narrow special interest group and to understand that "women's issues" are better understood simply as people's issues.

That point was emphatically made by Elizabeth Warren, who spoke from an empty classroom about the critical issue of affordable child care.

"We build infrastructure like roads, bridges and communications systems so that people can work. That infrastructure helps us all because it keeps our economy going," she argued. "It's time to recognize that child care is part of the basic infrastructure of this nation — it's infrastructure for families."

Obviously, Clinton's 2016 campaign went a long way towards educating the public that "women's issues" aren't a side issue, but touch on every part of our lives. It's good to see that realization has only strengthened in the years since. And it was refreshing to see women treated not as a special interest group to be pandered to, but as what women actually are: A majority force both among Democratic voters and society as a whole, who are therefore entitled to set the political agenda without being treated as trespassers.

The other good news from the night is that Democrats are taking Donald Trump's attempts to steal the election seriously — especially his campaign to destroy the Postal Service — and have regularly reminded voters, throughout this event, to take measures to keep that from happening. And they're not pulling punches when describing the very real threat to this basic right to vote.

"Why don't they want us to vote? Why is there so much effort to silence our voices?" Harris said in a brief statement early in the evening, an unusual move that emphasized the critical nature of this "vote early" message.

"We need numbers so overwhelming Trump can't sneak or steal his way to victory," Hillary Clinton said in her speech.

It wasn't just good message discipline. It was evidence that Democrats are responding rapidly to the emerging story of Trump's efforts to steal the election. In 2016, there was considerable hesitance from Democrats about being forthright with voters about Russian efforts, aided by the Trump campaign, to interfere with the election. Somewhat understandably, they didn't want to sound like hysterics or conspiracy theorists, even though the collusion was clearly happening.

This time around, Democrats seem to realize that they can't give into the pressure to downplay Trump's obvious efforts to corrupt the entire electoral process. As we all know now, the man has no morals, no shame and no sense of decency. As Michelle Obama would say, it is what it is. Democrats finally appear ready to deal with that problem head on, instead of simply hoping it goes away.