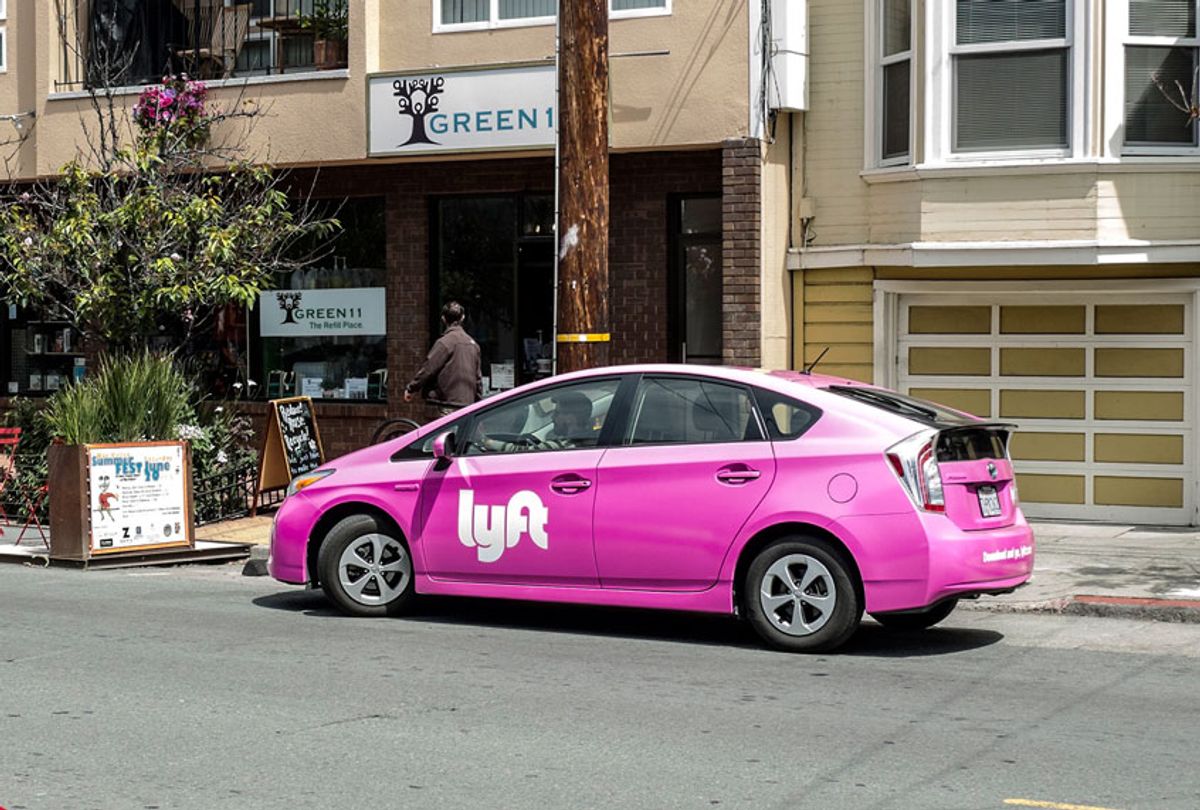 Rideshare giants Uber and Lyft were so upset over a California law that would make their contract workers into better-paid and benefitted employees that they threatened to cease operations in the state if it was not repealed. That tactic, known as a "capital strike," is an undemocratic means for private corporations to subvert the whims of democratically-elected legislators and voters — which is perhaps why it would have been illegal in many other countries with stronger unions and regulations.

On Thursday, an appeals court in California ruled that Lyft and Uber can continue to avoid classifying their drivers as employees within that state, issuing a temporary stay on a preliminary injunction order that would have forced the ridehailing companies to immediately reclassify their drivers as employees. The court has scheduled arguments for Oct. 13, but it is unlikely that a final ruling will be issued before the next election on Nov. 3.

At that time, voters will get to decide whether they want to pass Proposition 22 — an astroturf measure funded by the rideshare companies which would overturn a 2019 state law that requires most workers to be deemed employees unless a company can prove that they are independent contractors. (There was also a landmark 2018 California Supreme Court ruling which found that companies which wished to classify workers as independent contractors had to prove that they ran their own businesses, do work that is "outside the usual course of the hiring entity's business" and are free from the company's control in their routine tasks. The 2019 law modified the California Labor Code to reflect this ruling.)

The ruling would have had enormous implications for rideshare drivers. If the appeals court had not rendered that decision, Lyft and Uber would have been forced to treat their workers like employees, and as such to provide them with the improved income and benefits that go along with that status.

For ordinary citizens, laws are not something that can be avoided by throwing a tantrum. But Uber and Lyft pulled it off with a strategy that can best be described as a capital strike.

So what, exactly, is a capital strike? You may be able to glean that from the words of Uber CEO Dara Khosrowshahi, who told MSNBC on Wednesday that "if the court doesn't reconsider, then in California, it's hard to believe we'll be able to switch our model to full-time employment quickly." Or you could look at the words of Lyft President John Zimmer, who said during a call announcing the company's second quarter earnings in 2020 that "if our efforts here are not successful it would force us to suspend operations in California."

Perhaps the most famous capital strike occurred in France in the early 1980s, after the socialist Francois Mitterand was voted president for the first time in 1981. Mitterand enacted common-sense progressive economic reforms, like increasing the minimum wage, shortening the work week, increasing their equivalent of social security payments and issuing a solidarity tax on wealth. The threat of higher taxes led many investors to flee. As the New York Times wrote in a 1986 story on the topic:

The power of capital strike is well-illustrated by the reaction to the 1981 electoral victory of Francois Mitterrand's Socialist Party in France. United States direct investment in France, which had grown at an annual rate of 11 percent between 1965 and 1981 declined in every year since Mitterrand's victory, falling at an average rate of 9 percent a year.

Jacobin offers a succinct description in a 2017 story on what a capital strike usually entails:

Capitalists routinely exert leverage over governments by withholding the resources — jobs, credit, goods, and services — upon which society depends. The "capital strike" might take the form of layoffs, offshoring jobs and money, denying loans, or just a credible threat to do those things, along with a promise to relent once government delivers the desired policy changes.

For all intents and purposes, this is essentially what happened in California with Lyft and Uber. The duly elected representatives passed a law requiring businesses in that state to recognize their workers' basic economic rights, one that was reinforced earlier this month when a California judge ruled that the two companies had to immediately stop referring to its employees as contractors and provide them with the same benefits that would go to employees. The top executives at Uber and Lyft seem to have realized this would cut into their profits. Therefore they threatened to use their economic power to economically cripple Californians, both those who work for them and those who rely on their services... and the court caved and gave them what they wanted.

Now the next step is for the two companies to throw enough weight behind Proposition 22 to get it passed. If they can pull that off, they will have achieved their financial goal, and will avoid having to pay benefits, payroll taxes or other taxes for many of their workers.

In many other countries, Lyft and Uber would not have been allowed to get away with their capital strike.

"What you have in some other countries, depending on how their legal systems work, are all kinds of arrangements that make it harder for companies to do the things that the local population doesn't want, as it is in the United States," Richard D. Wolff, professor emeritus of economics at the University of Massachusetts Amherst, told Salon. "The law tilts here in such a way that it isn't illegal for companies to do all kinds of things which, in many European countries — which is what I know best — the companies cannot do, either because they would confront a legal challenge through the courts and all of that, or they would confront a political challenge from the local authorities, or they would confront a labor union and political party mobilizations."

He turned to France as one example, explaining that if companies tried to do in France what Lyft and Uber did in California today, "if the trade union at the Socialist Party and the Communist Party were upset about all of this, they would combine to put effective pressure, either on local politicians which include members on their own parties or get their own people out in the street or do both and basically make it impossible for the action to go through." In other words, a combination of legal action and labor strikes can successfully subvert a capital strike.

In the United States, by contrast, companies mainly have to worry about the bad optics of doing something that hurts their employees — and they are already prepared for that.

"Companies in this part of the world like Uber and Lyft don't have to worry about most of that," Wolff explained. "They have to worry about the public relations struggle and they have enough money, usually, to make that so complicated or diffused that you don't get the kind of mobilization, which is difficult here anyway. And the labor unions don't have a tradition here."

Wolff pointed to Germany as another example of a country where corporations are held more accountable.

"In Germany, for example, there are laws on the books stating that a company that proposes to close a business, to shutter it and say move it to China or whatever the hell else they might want to do, they would have to go through steps in order to do that," Wolff told Salon. He contrasted that with the United States, where it is often "perfectly legal" to fire or lay someone off on the same day that the employer tells them. "You can't do that in a number of European countries," he added. "You must give notice. The notice has to be X months before you have to formally notify the local political authorities, and they in turn have all kinds of powers to delay your move, to require compensation."

Yet, as Wolff and other economists have noted, similar progressive reforms are often watered down in the United States. Indeed, there is a long history of capital strikes managing to curb or even entirely thwart progressive policy changes. For instance, while President Barack Obama was able to implement some moderate progressive reforms during his administration, scholars Kevin A. Young of the University of Massachusetts Amherst, Tarun Banerjee of the University of Pittsburgh and Michael Schwartz of Stony Brook University argued in 2018 that Obama was limited by the threat of capital strikes.

"After the 2008 crisis [the economic crash], business deployed capital strikes and strike threats in conjunction with more familiar tools of influence, most notably campaign contributions, which helped ensure the appointment of pro-business personnel and guaranteed lobbyists' access to policymakers," they write. The financial industry could threaten to move its investments, effectively limiting reforms, they say. "Banks' responses to financial reform efforts highlight the mutually reinforcing nature of those strategies. Wall Street's ongoing disinvestment from the economy, coupled with the presence of bank-friendly personnel in government, increased the state's responsiveness to Wall Street demands."

As those authors explain, various large corporations threatened disinvestment if the Obama administration passed reforms that were too rigorous for their liking. Even after the administration signed off on rescue loans that pulled Wall Street firms that had caused the recession to the brink, "corporate executives continued and even intensified their disinvestment. The leverage spontaneously created by the market driven disinvestment had become a self-consciously applied strategy to pressure government policy in a range of realms — a capital strike."

They added that this makes it possible for corporate leaders to influence policies ranging from financial regulation to health care.

"Politicians often treat business warnings of reduced confidence as proof of pending disinvestment, using the warnings to justify preemptive action in favor of business. This calculus helps business negotiate for government policy in exchange for the promise of altered capital flows in the future," the authors explained.

Salon reached out to Lyft and Uber for comment on this story. Lyft referred Salon to a copy of their court filing, which explained why they claim they could not comply with the injunction on Thursday night and had to suspend operations. Uber has not responded as of this writing.