Feeling discontent? You too could fall for NXIVM since "the human mind is much more fragile than we like to believe" 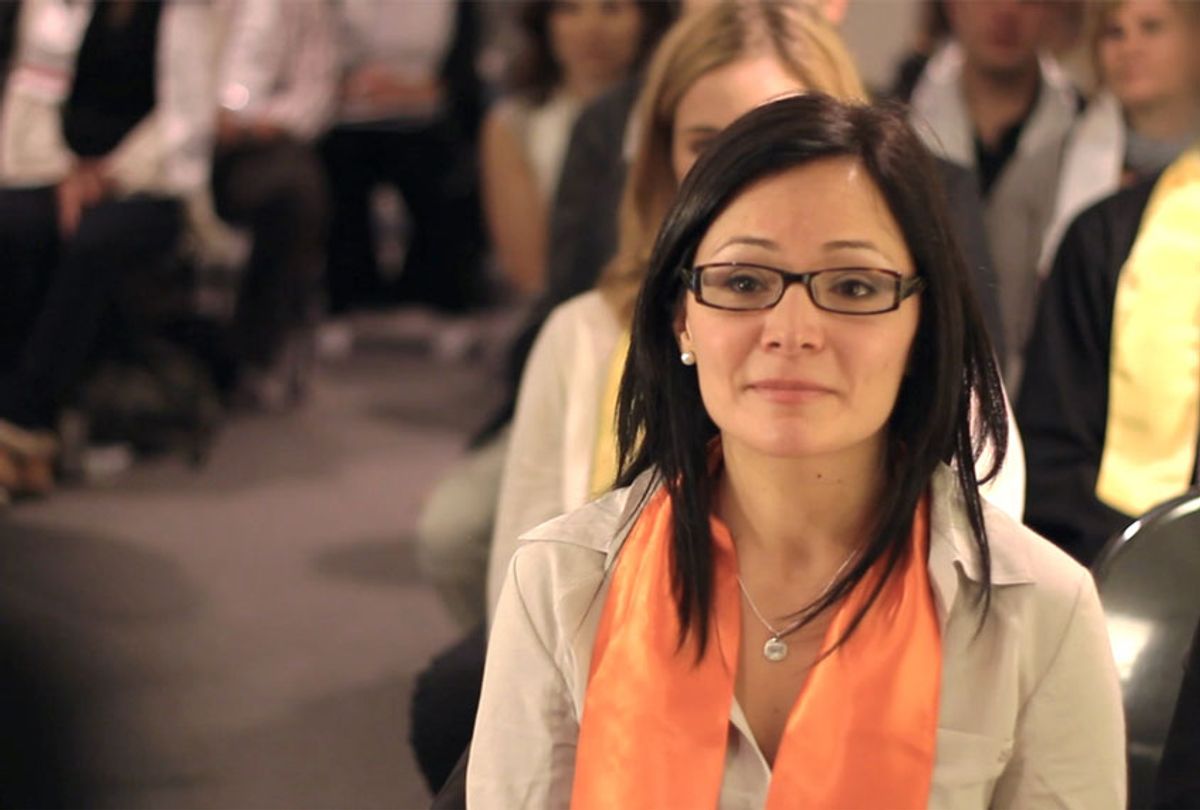 Crazy true stories – we're talking unreal, bananas bonkers, can't-make-this-stuff-up tales – are manna from Heaven for TV binge viewers. These are the people who feasted on "Wild Wild Country" and for a time obsessed over Ma Anand Sheela, the claws-out commander who lorded over the Rajneeshpuram, shall we say, "intentional community" in 1980s Southern Oregon.

They couldn't get enough of "Tiger King" in all of its trashy, horrific lunacy and hungrily await the debut of "The Vow," the nine-part documentary series hitting HBO this weekend. Since they're into that subject, who can blame them? Amidst the many unscripted and fictionalized depictions of cults, the story of NXIVM (pronounced NEX-ee-um), the self-improvement pyramid scheme serving as a front for a sex trafficking and slavery ring, is the girl with the most cake.

"The Vow" contains every sweetening quality people who love these shows seek out, with the added bonus of celebrity connection. Those who know about NXIVM likely read about "Smallville" star Allison Mack's involvement in its darkest side; Mack is one of the handful of organizational leaders charged and convicted of crimes associated with the case, eventually pleading guilty to racketeering conspiracy and racketeering charges in 2019.

She isn't the only celebrity caught up in the cult. Quite briefly her "Smallville" co-star Kristin Kreuk was part of the community before getting wind of something that made her shoot out of there like a bullet. Part of the shock presented by "The Vow" is in seeing how many famous or powerful people were close enough to the epicenter of this disaster, even though the series never implies they were in on the underground scandal or even knew about it.

Doesn't matter – it's still alarming to watch to notice multiple appearances by the likes of Grace Park and her "Battlestar Galactica" co-star Nicky Clyne, or to realize that the cult hooked the daughter of "Dynasty" star Catherine Oxenberg, who takes on a central role in the season once she joins forces with the main defectors.

Directors Jehane Noujaim and Karim Amer focus far less on the story's salacious aspects than they endeavor to demonstrate that nobody is immune to falling prey to charismatic Svengalis, using NXIVM founder Keith Raniere, a self-styled philosopher in Izod shirts and nerdy spectacles, as a case study.

In June 2019 Raniere was convicted of federal crimes including sex trafficking of children, conspiracy, and conspiracy to commit forced labor related to his role in orchestrating the exploitative cult within NXIVM.

But in the wealth of archival footage shown in "The Vow," Raniere is the quintessential con artist in schlub's clothing, skilled in manipulating people by prodding at their egos until he reaches a weakness. Scenes from the early Aughts show him looking like a holdover from the grunge era, his hair long and face scruffy as he connects with his followers through games of volleyball.

More recent photos show him appropriating the appearance of a tech company executive in a casual pullover and shaven face – the cultivated uniform of an innovator, in other words. His aura of confidence never wavers even when he's caught in a contradiction, and his low-key authoritative manner soothes his followers into doing his bidding.

Filmmaker Mark Vicente and his wife Bonnie Piesse, the audience's way into the series along with former NXIVM leader Sarah Edmondson, were once part of his inner circle. Vicente is the co-director of the New Age-themed 2004 indie "What the Bleep Do We Know!?" and chronicled hours' worth of his time within NXIVM, including the circumstances leading up to his and Piesse's escape.

Edmonson was a struggling actor when Vicente met her and brought her into the NXIVM fold; she eventually went on to lead its Vancouver headquarters. Vicente, Piesse and Edmondson all share stories similar to many of the organization's leaders: they had enjoyed some success in their chosen avocations only to find they weren't happy.

Founded in 1998 and based in Albany, NY, NXIVM bills itself as a personal and professional development program that caters to people seeking a greater sense of meaning and joy. Like so many wellness retreat programs NXIVM offers tools purported to eliminate internalized barriers to fulfillment using what Raniere describes as "technology."

These supposedly innovative techniques attracted the attention of the likes of Sir Richard Branson, a couple of children of former presidents of Mexico and won over the support of the highly wealthy Clare Bronfman, heir to the Seagrams fortune. Raniere even hoodwinked a blessing out the Dalai Lama even though he was initially and correctly skeptical of NXIVM.

A 2017 New York Times article on the organization estimates some 16,000 have enrolled in NXIVM courses over the years. However, a subgroup of that organization became passionate followers, engaging deeply in its programs and rising through the ranking system Salzman and Raniere created.

"The Vow" walks viewers through the terms used to describe the various branches of NXIVM's programs, beginning with its Executive Success Programs or ESPs, illustrating the purpose of their sterile and vaguely scientific sound. Each acronym takes on the aura of official legitimacy, making the self-help workshops appear like corporate seminars.

Among the more chill-inducing aspects of "The Vow" is the way each glimpse inside a NXIVM seminar resembles the sort of mandatory session a company might force its workers to attend for the sake of improving efficiency or organization or whatever it may be.

The difference is that leadership rankings are demonstrated with colored sashes and titles such as coach, proctor, escalating to the titles held by Raniere, "Vanguard," and Salzman, "Prefect."

From there arose more secretive subgroups, including a secret "sisterhood" called DOS, which stands for Dominus Obsequious Sororium  – "lord over the obedient female companions," according to the Times, though it's also described as "dominant over submissive."

This created a master-slave pyramid structure within the existent NXIVM framework helmed by women closest to Raniere – Mack included – who slept with him, recruited other women to have sex with him and subjected them psychological and physical control mechanisms, codified by a barbaric branding ritual. Holding the secret in place were the masters' regular demands for "collateral" from slaves – blackmail material that could be used against them if they broke their "vow."

Noujaim and Amer could have led "The Vow" with these lurid details. Instead they choose the staider route of depicting how innocent and legitimate this enterprise seemed to its participants – many of them intelligent, driven people attracted to Raniere's and Salzman's illusion of combined genius.

Ultimately this approach makes "The Vow" more fascinating and horrifying because it persuasively argues that anyone can fall for influence techniques, including the smartest of us. The human mind is much more fragile than we like to believe, says a cult expert in a scene deep into the first season's run. By then we believe him because we've watched it happen.

In a particularly devastating episode we hear from Barbara Bouchey, a former high-ranking NXIVM member and one of Raniere's former lovers. Not long after exiting NXIVM in 2009, Raniere and his inner circle rained down so many legal threats upon Bouchey – 360 court filings within a 10-month period, by her report – that she was left with $700,000 in legal debt. Nevertheless, when she watches footage from happier times, she can't help crying at the thought of what could have been. "There was so much potential, and he did do good and help thousands of people, including me," she insists.

At the same time "The Vow" doesn't completely cast aside the soapier aspects of this case. Early episodes ground the story's progression in the trepidation surrounding Vicente's and Piesse's exit, and their eventual facilitation in extricating Edmondson. But Oxenberg's determined crusade to pry her daughter India out of NXIVM unintentionally takes on an air of melodrama that draws focus away from the initial shock and penance Edmondson and Vicente bring to the plot. (She also authored a book about her journey published in 2018 that was adapted into a Lifetime movie that aired in 2019.)

Still, the measured usage of audio clips over blurs of color swirling in water – some on frayed fabric, some liquid and ambiguous – anchor the production in a sense of steadily rising angst. Noujaim and Amer inject that flavor into the editing as if to vicariously place the viewer in the classic situational analogy Edmondson evokes to describe her submersion into DOS: she says she felt like a frog slowly being boiled in a pot.

Grim as this seems, however, what makes "The Vow" addictive is the filmmakers' obvious depiction of an all too common vulnerability in the modern age, which is a lack of satisfaction, a starvation for community and a profound need to lead a life of purpose and meaning.

Over and over the cult's present and former adherents speak of their yearning to change their world through being standard bearers for goodness and ethical behavior.

By the seventh episode the irony of that vision is pounded into us as we watch the actual good guys in "The Vow" standing with each other after a long struggle to get anyone to take them seriously, but right after the Times story breaks, and we see the toll that worrying about their safety and future has taken on them.

Part of the concern from Edmondson's perspective is that initial reporting focused on the story's sensational elements – the branding, the sexual coercion. She and the rest want the world to understand the path that leads a sane, smart person to submit to such indignities in the first place. "The Vow" arrives a few years after Edmondson voices that regret but fulfills her wish, and without piling additional exploitation atop the damage she and others already have sustained.