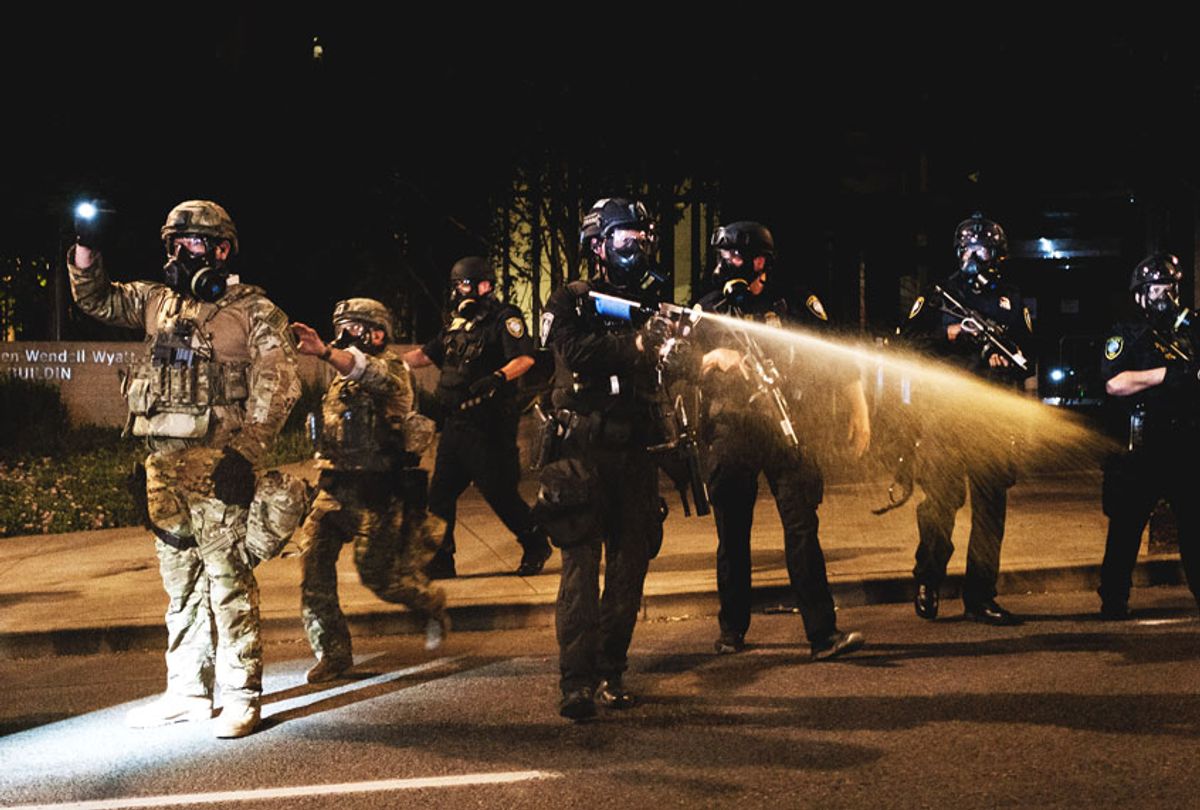 The city of Portland recently sent the Oregon Department of Environmental Quality (DEQ) information they requested about the chemicals contained in the crowd control agents that have been sprayed on Black Lives Matter protesters by law enforcement since May — and their documents reveal that the tear gas contains chemicals that are apt to pose a health risk to those exposed, particularly given the high quantities sprayed. The documents provide insight into the potential health and environmental hazards posed by the tear gas that has blanketed protesters in the streets of downtown Portland nearly every night for months.

The documents also confirm that the city of Portland sources its tear gas from Safariland, LLC, a "security products" manufacturer that has faced scrutiny for its role in supplying tear gas used by law enforcement to suppress protests over the death of George Floyd.

The documents sent to DEQ by Portland include a Material Safety Data Sheet (MSDS) for "Flameless Tri-Chamber Grenade, CS" and a Safety Data Sheet for "Skat Shell 40 mm Multiple Projectile Round, CS," both manufactured by Defense Technology, a subsidiary of Safariland, LLC. These types of technical documents are required to be written for industrially produced chemicals and substances, and explain the hazards that said substances pose to human health as well as environmental health.

"We asked [the city of Portland] what is in the tear gas and the quantities, and that is what they sent back to us," Susan Mills, a public affairs specialist at the Oregon DEQ, told Salon by email.

CS gas refers to the active ingredient in tear gas, 2-chlorobenzalmalononitrile, the incapacitating agent that causes tearing and burning sensations in the eyes, mouth, nose and sinuses.

As Salon reported yesterday, Mills said the agency sent a letter to the city of Portland last month asking the city to conduct additional pollution testing to see whether the constant tear-gassing could have caused lasting environmental damage through stormwater discharges. Tear gas is a common crowd control agent, but is not often used with such regularity in a single location, which prompted the investigation into the potential environmental effects.

"Since then, we have received their monitoring plan," Mills explained. "However, between the time the letter was sent and when the plan was received back by DEQ, it rained in the city and Portland BES [Bureau of Environmental Services] conducted sampling based on the specific requirements laid out. We are still waiting for results."

Mills said that, although DEQ instructed BES to submit their results within two weeks of receiving them, the results may "take longer than usual" to arrive because some were sent out of state for testing. She said that the Oregon DEQ does not know either the quantity of chemicals used in the tear gas sprayed by city police, nor "the chemicals and quantities used by the federal government while they were in Portland."

"In the meantime, we understand that Portland BES is using their authority to protect the storm drains in downtown Portland," Mills added.

"We've got to put this in perspective here," Dulken told Salon. "This is a focused area where we're seeing deployment of CS gas, and because there was a concentrated deployment of CS gas near the Justice Center, and we saw documented residue that we believe was flushed into the storm drain. . . . Because of that, we are taking action and sampling that area and seeing if we can identify if there was an elevated level of certain chemicals. Those are the sampling that we should have results by in mid-September."

She later added by email, "While sampling results take a few weeks to analyze, our pollution prevention actions were immediate. Along with sampling, we also cleaned out the storm drains within a day of receiving credible reports of possible CS residue being flushed down storm drains."

Dr. Lewis S. Nelson — the professor and chair of the Department of Emergency Medicine, director of the Division of Medical Toxicology at the Rutgers New Jersey Medical School and senior consultant at the New Jersey Poison Information & Education System — spoke to Salon about the potential health risks of these chemicals.

Nelson told Salon that the other chemicals besides CS were "fillers and incipients and other additives that provide smoke and basically coverage, so that you can see [the gas], and it could work as a screen. . . .  they're all metal derivatives." Nelson said that these were potential causes for concern in that "lead is a problem. Manganese is a problem. These things, if you're exposed to chronically or very high concentrations, you can develop real toxic syndromes. The problem with all of these in this venue is pulmonary irritation and eye irritation and throat irritation, to some extent."

Salon asked Nelson about the Oregon DEQ's concern that the large quantity of tear gas used against protesters could have contaminated the water supply.

"Good question," Nelson said pointedly. "It's probably going to be meaningless, but I would agree with you that having extra lead in the water cannot in any way be a good thing," he added. "I think the amount that this is going to add to a reservoir full of water, especially after it undergoes its cleaning process, is going to be fairly small, right? Most of these metals are not problematic if you eat them in small quantities, even lead. . . .  So the amount that it's going to dilute out into is going to ultimately be very small."

He said that this does not mean there is no danger, noting that "if somebody were to drink water that was heavily contaminated with lead chromate, for example, they could have symptomatic consequential lead poisoning." His observation was that "it would take a very specific situation. It would be very unlikely to happen. Putting anything in the water supply is not something I'd like to do." Even flushing medications down the toilet, he pointed out, has a "tiny little" effect on the chemicals in the water supply.

"The question is, does it reach a biological threshold of concern? And the answer for most of these would really be very unlikely," Nelson told Salon.

According to the safety data sheet, the "dangerous components" in the "Skat Shell 40 mm Multiple Projectile Round, CS" have resulted in the European Union classifying them as a "fire or projection hazard," "toxic if swallowed," "toxic if inhaled," capable of causing allergy or asthma symptoms or breathing difficulties if inhaled, and potentially "toxic to aquatic life with long lasting effects."

Photos from protesters from the past few months reveal that some of the tear gas purportedly sprayed on Portlanders was a different variety from either of the two Safariland-manufactured brands the city mentioned in their letter to DEQ. Indeed, an article published in the Portland Mercury on August 4 showed a photo of exploded tear gas canisters "collected at downtown Portland protests over the last two months." Those cans were of the brand "Instantaneous Blast CS," also manufactured by Safariland's subsidiary Defense Technology, but with different internal chemicals. The safety data sheet for Instantaneous Blast says that it contains diiron trioxide, magnesium oxide, zinc metal, potassium perchlorate, aluminum powder zirconium powder, and lead dithiocyanate, among other metallic compounds.

Salon has reached out to Safariland, LLC, which is located in Jacksonville, about the exact amounts of each chemical in their crowd control agents. We have not received a response as of the time of this writing.