Tear gas from the near-nightly sieges in Portland may be trickling into the Willamette River, officials fear 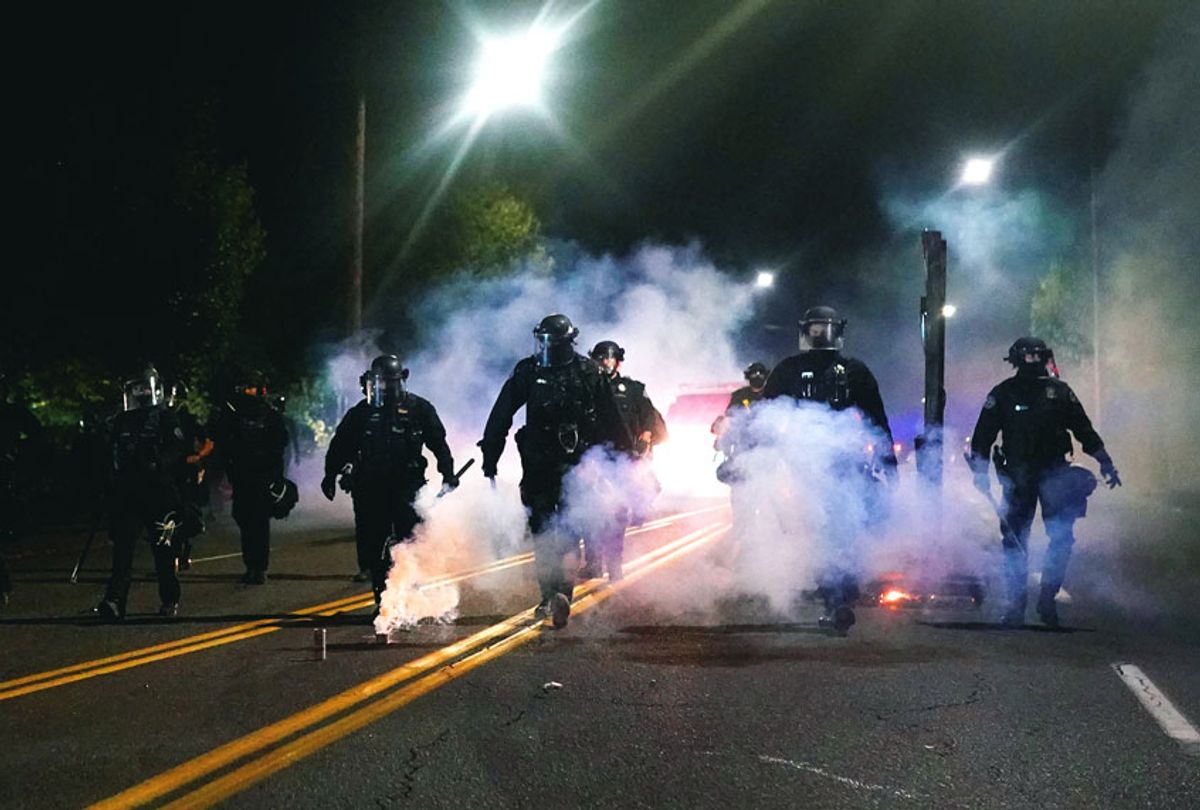 Portland police officers walk through clouds of smoke while dispersing a crowd from in front of the Multnomah County Sheriffs Office on August 22, 2020 in Portland, Oregon. Hundreds of protesters clashed with police Saturday night following a rally in east Portland. (Nathan Howard/Getty Images)
--

Police in Portland peppered protesters with tear gas on Monday as they assembled outside of a police station, following a weekend of ongoing demonstrations against police racism and in favor of defunding the police. Their actions continue a history of Portland police using tear gas on demonstrators tracing as far back as May. Portland made headlines last month after federal law enforcement began detaining protesters, even though it was unclear if all of those detained had been involved in illegal activity.

Protesters and activists alike are fearful for the long-term effects of being exposed to chemical weapons. As the Oregon Department of Environmental Quality noted previously, there is no scientific precedent for the long-term exposure of tear gas on humans, as it is not meant to be used often. And the amount of the caustic gas, reportedly the variant known as CS gas (which one Portland police official insisted was different than tear gas), sprayed in downtown Portland is similarly unusual — nearly every night since the week of George Floyd's death on May 25, tear gas has coated the sidewalks and drains.

That's been stoking fears among local watchdogs agencies, including those who oversee Portland's water infrastructure, about the effect of pollution from the constant gassing. Alarmingly, it appears little is publicly known about the environmental effects of the chemicals in the tear gas itself.

Then, on July 30, environmental regulators in Oregon sent a message to the city of Portland: In response to the "unprecedented" amount of tear gas used by the city's police against the civil rights protesters who assembled there in May and June, the officials wanted a thorough investigation to make sure the chemicals did not cause lasting harm to the environment.

After acknowledging Portland's ongoing efforts to "manage municipal stormwater discharges," the Oregon Department of Environmental Quality (DEQ) sent a letter to Portland's Bureau of Environmental Services. "Due to the unprecedented amount of tear gas products used within the downtown area over the last 90 days," the letter read, "DEQ is requiring the City to conduct additional water quality monitoring." They added that the city must submit a monitoring plan within three weeks of the letter's date (which was August 20).

The DEQ called for Portland officials to identify areas where stormwater containing tear gas might enter the Willamette River, which runs from Eugene to downtown Portland where it merges with the Columbia River and then flows out to the Pacific Ocean.

In addition, the authorities required Portland to engage in "water quality monitoring" at areas where heavy rain may cause tear gas to discharge into the Willamette River, as well as monitor "at the closest upstream and downstream outfalls that do not collect stormwater from the downtown area during the first flush, but do discharge stormwater."

The Oregon DEQ also wanted Portland to inform them of pollutants in the water including lead, copper, barium, zinc, perchlorate, total chromium and hexavalent chromium.

Salon reached out to DEQ for comment, and will update this story if and when they respond.

Following the monitoring event, the Oregon DEQ ordered Portland to submit a summary within two weeks that revealed the results of their investigation and compared the 2020 data with data from previous years at the same locations, assuming that they had been monitored for pollutants in the past.

"If a rain event that is likely to result in a discharge to the Willamette River occurs prior to plan approval by DEQ, the City must contact DEQ and conduct the monitoring described above," the letter concluded.

A spokesperson for the city's sewer and stormwater agency told reporters at the time that, although Portland already "regularly" tests near the river, it would now test near the Justice Center, the courthouse and two parks because police used tear gas on protesters in those areas. The spokesperson also noted that there is likely tear gas residue already in the areas near the courthouse and Justice Center but that the city does not know very much about tear gas or tear gas residue.

Earlier this month it was reported that the Portland Bureau of Environmental Services studied six storm drains around a building with a police station and jail, as well as a federal courthouse. A spokesperson said at the time that there was no evidence of tear gas residue reaching the river, although she added that "it's also hard to say because there is so much unknown about the materials and so much unknown about the quantities."

Reportedly, the type of tear gas used on Portland protesters — by both the police and, previously, unspecified federal law enforcement officers from the Department of Homeland Security sent in on orders from President Donald Trump — is a substance known as CS gas. CS is a chemical known as 2-chlorobenzalmalononitrile. A 2000 article in the British Medical Journal found that CS "causes epiphora [uncontrollable crying], blepharospasm [abnormal eyelid contractions], a burning sensation, and visual problems. Coughing, increased mucous secretion, severe headaches, dizziness, dyspnoea, tightness of the chest, difficulty breathing, skin reactions, and excessive salivation are common."

Salon could not identify any scientific research on the long-term pollutant effects of CS or of other comparable cyanocarbons. One article published in the Journal of Environmental Analytical Chemistry proposed decontaminating tear gas using "calcum hypochloride, silbestrol or permanganate," and noted that sulfur mustard, a different chemical tear gas, could remain in soil for 10 years. Yet that paper did not say anything specifically regarding CS gas's environmental sustainability.

In terms of human health, medical literature has recorded reports of deaths from using the gas, including of 3 boys in Israel in 2010.

"There are well-documented severe injuries and deaths from chemical irritants," Dr. Michele Heisler, medical director of Physicians for Human Rights and professor of public health and internal medicine at University of Michigan, told Salon previously. "Despite the lack of research, we know that tear gas is inherently indiscriminate and law enforcement should only use this crowd-control weapon as an absolute last resort, when all methods of peaceful resolution have been exhausted."

Dr. Rohini J. Haar, an adjunct professor of epidemiology at University of California, Berkeley School of Public Health who focuses on human rights issues, told Salon previously that one of the biggest problems with the use of tear gas is that law enforcement officials frequently do not disclose what is in the canisters. As a result, it can be difficult to assess whether they pose long-term health risks for people exposed to them.

"I think some transparency about what chemicals are in there would give us some insight into how they break down and what the degradation products are. We don't have that information," Haar told Salon.