"Electric" and very turbulent: Hurricane hunter Garrett Black on the experience of being aloft inside a hurricane 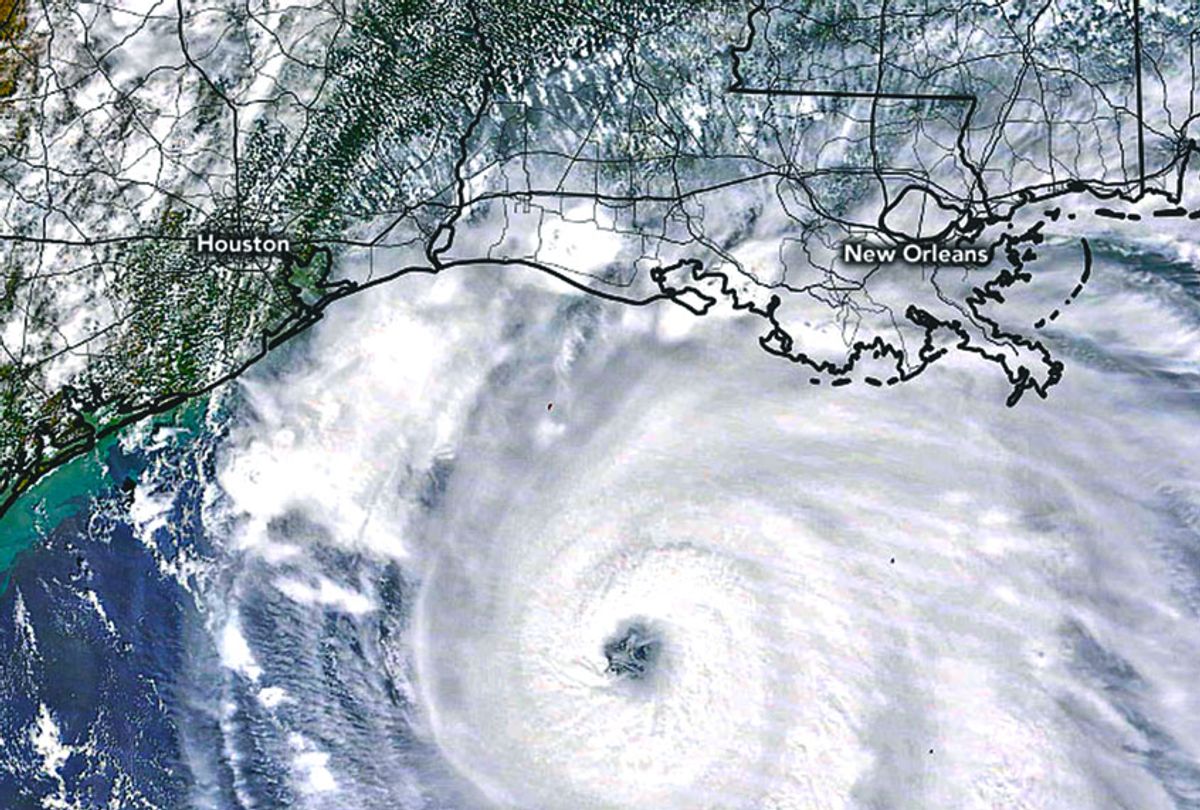 Last night, as Hurricane Laura crept closer to making landfall, Captain Garrett Black, aerial reconnaissance weather officer for the 53rd Weather Reconnaissance Squadron, hopped in a WC-130J aircraft and prepared to fly into the storm. As a hurricane hunter, Black's goal was to descend into the eye of the hurricane and obtain accurate readings on top wind speeds. "We documented winds anywhere from 120 to 130 knots at the surface," Black told Salon in an interview on Thursday afternoon. Black's data collection ends up being a crucial component for weather forecasters, whose predictions end up saving lives. "Once the data is there, the forecasters on the floor have the ability to use our data, along with other data that they have streaming and to kind of put in a good picture of what's going on," Black said.

Hurricane Laura made landfall early Thursday morning shortly after 1 a.m. in Cameron, Louisiana. The National Hurricane Center warned the previous day that an "unsurvivable storm surge with large and destructive waves will cause catastrophic damage." As of Thursday evening, four deaths have been linked to the storm in Louisiana. Over 1.5 million people in the coastal regions of Louisiana and Texas were under some form of evacuation orders. Here, Black describes what it was like flying into the hurricane. As always, this interview has been condensed and edited for print.

How did you become a hurricane hunter?

So you flew through Hurricane Laura last night. What was that like?

It's obviously a very strong and powerful category 4, high-end category 4 hurricane. And it was a very interesting mission since it was a landfall mission — meaning that while we were in the storm it made landfall in Louisiana — so those are always a very unique type of storm for us to fly. And it's always quite humbling when you know that there's [a] real impact going on at the surface. The storm was not completely over water at that point, but it was a very turbulent and bumpy ride, quite a bit of lightning, especially in the northern sections of the storm. We ended up getting pretty strong winds and it was a long night for the entire crew.

Can you share more about that turbulence? Is it like normal airplane turbulence that you would experience on a commercial flight?

We always try to figure out what kind of turbulence we're going to end up going through, and it changes a lot to even in the same storm. So, our first pass through the storm was actually relatively smooth, believe it or not. But on our outbound leg we ended up getting quite a bit of turbulence . . . . we get bumped around a little bit, but we take safety to the utmost importance. We're very trained to deal with those kinds of things, and our pilots up front are experts at handling the aircraft in those kinds of environments.

Did you fly into Hurricane Laura's eye? What was that like?

We made what we call six hurricane penetrations last night to the storm. We got into the storm environment around nine or 10 o'clock central time, and we were flying in the eye wall and into the center of Hurricane Laura until about three in the morning before it completely made landfall. At that time, we moved back to our home base to get some rest. It was a long few hours there and we were able to get into the center about six different times.

Since it was such a strong storm, it has what we call the "stay effect." The eye wall surrounding the center was tall. Thunderstorms going up beyond 40,000 and 50,000 feet. Obviously the center of the eye was very clear above us, so when we made it through the worst of the weather in the eye wall and we got in the center, we could actually see the stars and some of the illumination from the moon inside. And it was real clear and calm in the eye. It's a very eerie feeling and very humbling feeling too, to know you're in the center of a very powerful hurricane. It's just a very unique experience that most people honestly don't don't get to experience, so it's very interesting.

When you're flying into the hurricane, what's the most information you're looking for? What's the purpose of the mission?

Our main goal is to get into the actual storm at about 7,000 feet, so fairly low to the surface. Obviously we have satellites now and that gives forecasters at the National Hurricane Center a good overview of what's going on. But we're actually able to get in the storm and really sample the intricate details of what's going on close to the surface.

So our main goal is to go in and find the exact center of the storm. The stronger hurricane, typically it's a little easier to find with the eye. But we're looking for the strongest winds that we can find as well. Our main things are finding the exact center and then how strong the winds are, and while we do that our loadmaster is releasing dropsondes, an instrument that falls from the aircraft to the surface of the water that's collecting wind speed, wind direction, temperature, dew point and sea level pressure. We send all of that information directly to the National Hurricane Center so they can see what's going on in real-time to get the forecasts as accurate as possible.

I've read in other interviews with Hurricane Hunters that hurricanes have been described as having their own personalities. And I'm curious if you could describe what Hurricane Laura's personality is like?

Every storm does have its own personality, and ours was very unique with it making landfall, so we definitely had some impacts from the land. It had a little bit of a different feel to it, which probably explains why we got bumped around a fair amount after our first pass. But it was just very electric, and very dynamic, compared to a lot that we fly [into]. The eye wall max winds stretched out pretty far — and a lot of times you don't see that for stronger storms. It'll just be, you know, high intensity right there in the eye wall. But the wind field was very large. It was very electric, turbulent and windy.

How did it compare to other hurricanes that you've flown through?

It was rapidly intensifying pretty much all the way up till landfall. So, when I entered the Gulf, it was a tropical storm and quickly became a hurricane and then quickly became a major hurricane, so I think it is just interesting at how fast it intensified. Fortunately the National Hurricane Center did a great job of predicting where it was going to make landfall to give everyone a great lead time on it. The winds were very impressive and, in turn, it had a large swath of storm surge especially on the eastern side of the storm.