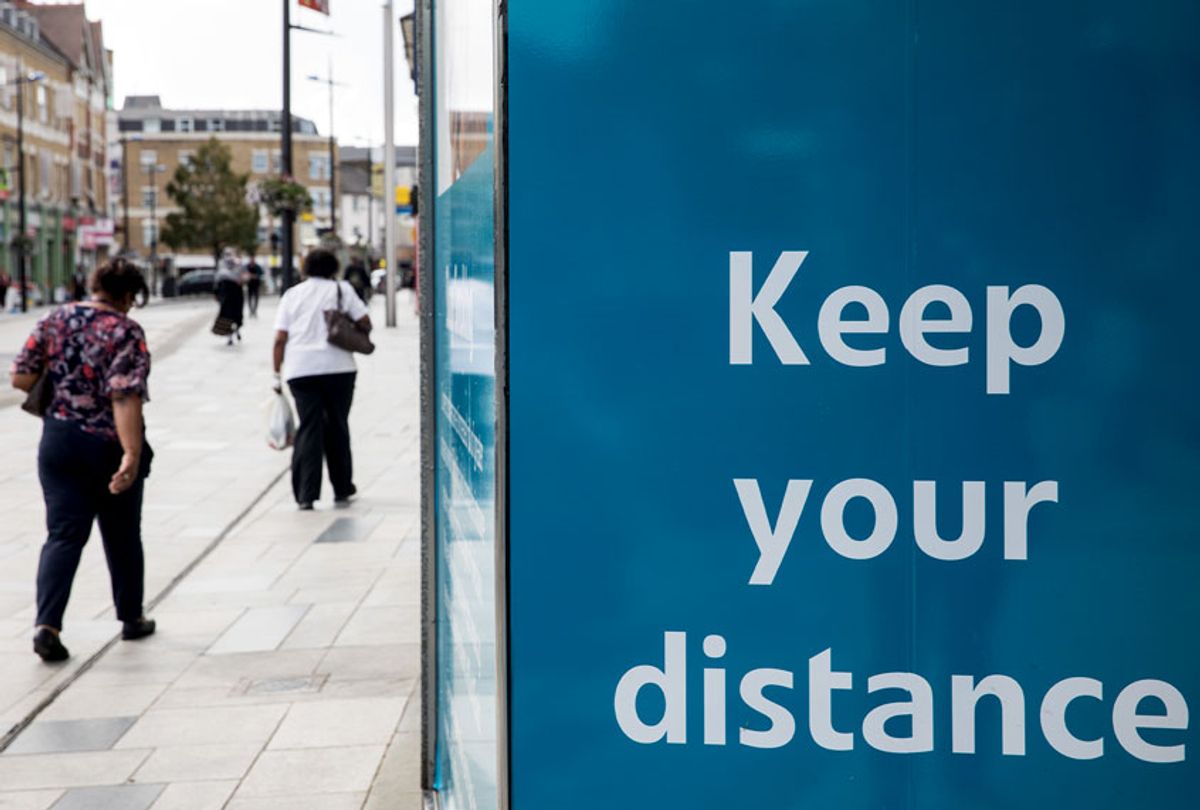 Members of the public walk past a COVID-19 social distancing display on 21st August 2020 in Slough, United Kingdom. Slough has been listed by Public Health England (PHE) and the Department for Health and Social Care (DHSC) as an area of concern for COVID-19 following a rise in positive coronavirus cases over the last two weeks. (Mark Kerrison/In Pictures via Getty Images)
--

Since the beginning of the pandemic, public officials and health agencies worldwide have recommended that the public observe a six-foot social distancing rule — keeping a minimum of six feet away from strangers in order to limit the potential for transmission of the coronavirus.  Indeed, the "six-foot rule" has become etched in the public consciousness — through signage, posters taped to restaurant walls, and verbal admonitions from law enforcement.

Now, a new medical journal article calls into question whether six feet is really enough distance to avoid transmission of the virus. If taken seriously, such recommendations could have widespread repercussions on public health and the behavior of the everyday public.

The article, published in the medical journal BMJ, argues that, rather than applying a single consistent social distancing guideline, the public should employ different standards based on the specific details of their situations.

"Instead of single, fixed physical distance rules, we propose graded recommendations that better reflect the multiple factors that combine to determine risk," write authors from the University of Oxford, the Massachusetts Institute of Technology and St. Thomas' Hospital. "This would provide greater protection in the highest risk settings but also greater freedom in lower risk settings, potentially enabling a return towards normality in some aspects of social and economic life." The authors include a photo of the gas cloud from a sneeze, illustrating how it extends around 7 to 8 meters (23 feet to 26.2 feet).

Originally, the six-foot rule was based on the belief that two meters, or six feet, was the transmission range for aerosols containing pathogens (a particle that can produce disease). Yet researchers say this may not always be true. They assert that variables such as the force with which a person exhales, the specific diseases contained within the droplets, the size of the droplets themselves, the amount of ventilation in the area where exhalation has occurred and the specific airflow patterns of those locations all impact how far an aerosol may travel in order to infect someone.

"Physical distancing should be seen as only one part of a wider public health approach to containing the covid-19 pandemic," the authors conclude. "It needs to be implemented alongside combined strategies of people-air-surface-space management, including hand hygiene, cleaning, occupancy and indoor space and air managements, and appropriate protective equipment, such as masks, for the setting."

Aerosol experts previously cast doubt on whether six feet was enough to prevent transmission, particularly in an indoor space. The New York Times published a simulation that illustrated how aerosols could, via a sneeze, spread throughout the inside of a subway car, far beyond a six-foot radius of the sneezer.

Salon reached out to public health experts who emphasized that, as a rule, people should still try to maintain a 6 foot or 2 meter social distancing rule — even if in certain cases that might not be enough.

"The 6 foot (2 meter) rule remains a reasonable guideline," Dr. Georges Benjamin, Executive Director of the American Public Health Association, told Salon by email. "The bulk of droplet emissions are addressed by this. Aerosols are still a problem but are addressed some by masks. This is a practical guide when possible. Mask still should always be used as part of layered protections. This is all about risk reduction. The only way to have zero risk is to not be around anyone infected."

He added that, in order to stay safe from the novel coronavirus, people should wear a mask and wash their hands.

Dr. Eric Feigl-Ding, Senior Fellow at the Federation of American Scientists, expressed a similar thought to Salon by email.

"Social distancing is important still — but not foolproof," Feigl-Ding explained. "We know with indoor aerosol transmission that it's a real problem, since we know aerosols can be infectious and found up to 27 feet away, and [can] float [from] 20 minutes to four hours in the air."

He argued that, in order to protect themselves, people should also 'improve indoor ventilation and use indoor air filtration, in addition to masks."

Dr. Russell Medford, chairman of the Center for Global Health Innovation and Global Health Crisis Coordination Center, elaborated on these observations in an email to Salon, writing that "people should closely adhere to current CDC guidelines at a minimum  (social distancing, face-masks and hand-washing) but each of us should also have situational awareness to recognize the relative risk of infection in different situations: indoor vs outdoor, crowded vs uncrowded venues, use of face-masks (or not) by others, poorly vs well-ventilated indoor spaces, prolonged vs short duration of contact."

He added, "For example, in a higher risk situation (a crowded, poorly-ventilated indoor environment where few participants are wearing face masks), social distancing beyond six feet and minimizing your exposure time should be encouraged."