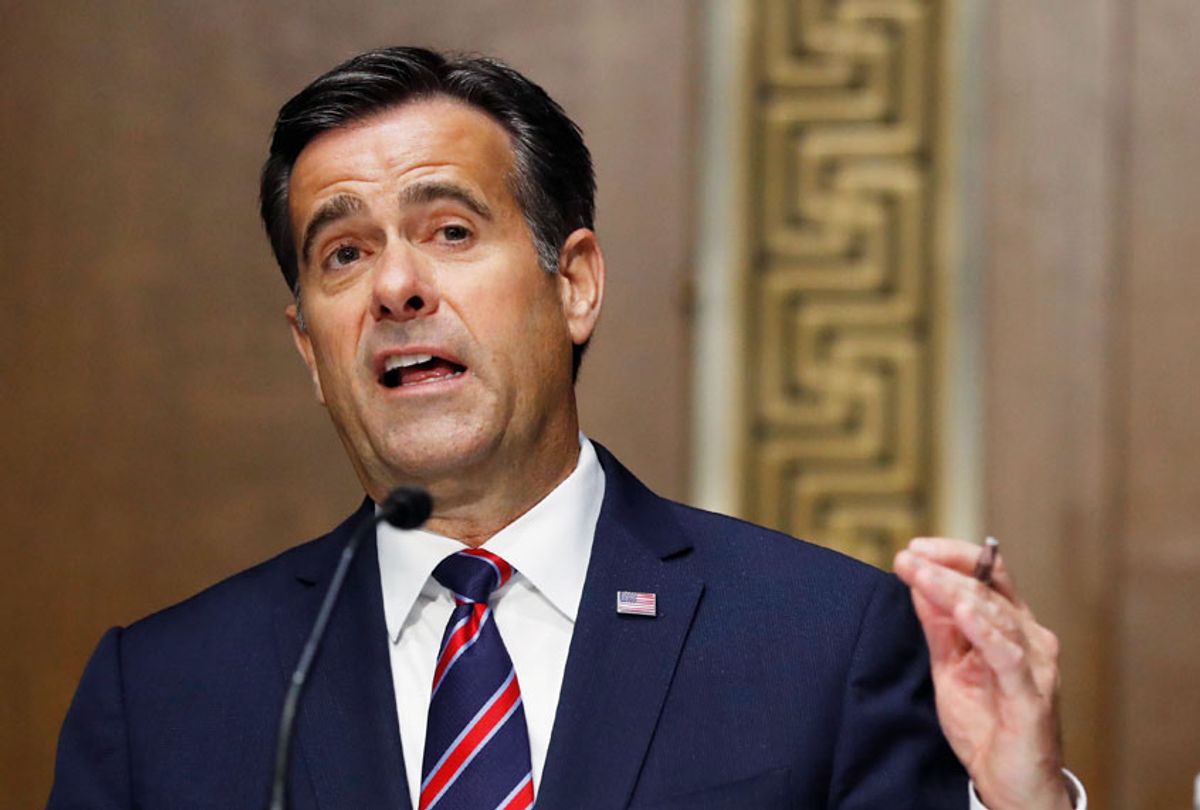 Director of National Intelligence John Ratcliffe, during his confirmation hearing before the Senate Intelligence Committee on May 5, 2020. (Andrew Harnik-Pool/Getty Images)
--

Ratcliffe told the House and Senate intelligence committees on Friday that he would cease providing in-person briefings to the panels to ensure that "elections security, foreign malign influence, and election interference is not misunderstood nor politicized."

Ratcliffe told Fox News on Sunday that the move was aimed at stopping "a pandemic of information being leaked out of the intelligence community" after Democrats complained that officials were keeping key information from the public.

"Within minutes of one of those briefings ending, a number of members of Congress went to a number of different outlets and leaked classified information for political purposes," he said. "To create a narrative that simply isn't true, that somehow Russia is a greater national security threat than China."

Ratcliffe's comments came after William Evanina, director of the National Counterintelligence and Security Center, responded to Democratic criticism by issuing a statement saying that Russia was using a "range of measures" to interfere in the 2020 election "to undermine former vice president [Joe] Biden's candidacy and the Democratic Party" while China would prefer Trump's defeat.

Ratcliffe said that he would "continue to keep Congress informed" through written updates.

Democrats cried foul over the abrupt announcement and vowed to compel Ratcliffe to brief lawmakers.

House Intelligence Committee chairman Adam Schiff, D-Calif., told CNN on Sunday that the administration's announcement "doesn't make any sense," since written briefings can be leaked just as easily as the contents of in-person briefings. Schiff suggested that Ratcliffe had a different motivation.

"Unless the goal is not to allow members of Congress, the representatives of the American people, to ask questions," Schiff said. "You can state things in a written report that are not correct, and you can't be subject to questioning about it."

"When you can hide behind documents or withhold documents and not have to answer questions about it, it lets you conceal the truth," he said.

Sen. Amy Klobuchar, D-Minn., author of an election security bill that has been blocked by Senate Majority Leader Mitch McConnell, told ABC News that Ratcliffe's decision was a "complete outrage."

"That's what happened in 2016, there wasn't enough information out there. Now we know. We've learned a lesson," Klobuchar said. "And I think the House is going to have to subpoena the director of intelligence in order to get information, which is crazy."

Asked whether he would subpoena top intelligence officials to testify on election security before the election, Schiff told CNN, "That is certainly one of the tools that we may use."

Schiff said the decision on whether to issue subpoenas would be left to House Speaker Nancy Pelosi.

The rift is the latest in the Trump administration's attempts to downplay Russia's election interference. Evanina said in his statement that China would prefer Trump to lose but that Russia was engaging in efforts similar to its 2016 meddling. Evanina also said that a Ukrainian lawmaker who had been in contact with Trump attorney Rudy Giuliani about information aimed at smearing Biden was part of a Russian disinformation plot.

Asked about the intelligence assessment earlier this month, Trump disputed the findings. "The last person Russia wants to see in office is Donald Trump, because nobody's been tougher on Russia than I have, ever," he insisted. "I don't care what anybody says."

Ratcliffe claimed that China was the greater election threat, telling Fox News that it was using a "massive and sophisticated influence campaign that dwarfs anything that any other country is doing."

Senior U.S. officials disputed Ratcliffe's claim and criticized Evanina's statement for seemingly equating the Chinese efforts to those of the Russians.

"Between China and Russia, only one of those two is trying to actively influence the outcome of the 2020 election, full stop," one official told The Washington Post. Another official told the outlet that China's efforts are not the kind that Russia has used to try to disparage Biden.

Pelosi and Schiff accused the Trump administration of drawing a "false equivalence" between the efforts of Russia and those of China and Iran.

"Only one country – Russia – is actively undertaking a range of measures to undermine the presidential election and to secure the outcome that the Kremlin sees as best serving its interests," they said in a joint statement.

In a statement, Biden said Ratcliffe's decision was "nothing less than a shameless partisan manipulation" to protect Trump's interests.

"There can be only one conclusion: President Trump is hoping Vladimir Putin will once more boost his candidacy and cover his horrific failures to lead our country through the multiple crises we are facing," the Democratic nominee said. "And he does not want the American people to know the steps Vladimir Putin is taking to help Trump get reelected or why Putin is eager to intervene, because Donald Trump's foreign policy has been a gift to the Kremlin."