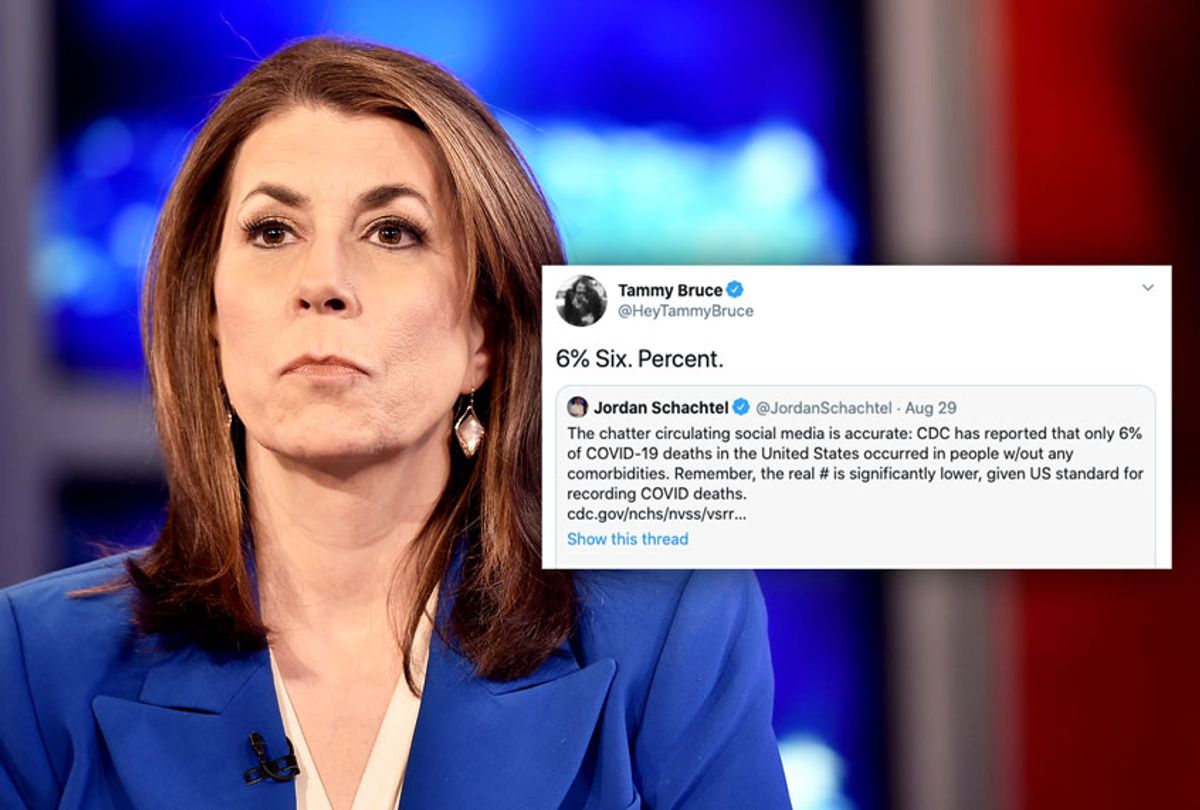 This story was updated on September 1 at 2:00pm EDT to include President Trump's sharing of the misinformation on Twitter as well as Dr. Anthony Fauci's reaction.

The president of the United States, along with numerous prominent conservatives and right-wing personalities, have seized on a misunderstood COVID-19 mortality statistic from the CDC as "evidence" that pandemic public health fears are overblown. Twitter even removed a retweet by President Trump sharing the misleading statistic.

Yet the viral spread of the "6%" meme seems to speak to both a larger scientific illiteracy and the rapidity with which the conspiratorial right jumps on misinformation that appears convenient to their political narrative. Salon spoke with scientific experts to understand the origin of this meme, and how it has been misinterpreted.

In a report published earlier this month, the Centers for Disease Control and Prevention (CDC) wrote that "for 6% of the deaths" reported involving the novel coronavirus, the data indicates that "COVID-19 was the only cause mentioned." This means that there were co-morbid conditions — meaning multiple health conditions that compounded the coronavirus' effects — associated with the COVID-19 death on 94% of the other occasions. The CDC added that, "for deaths with conditions or causes in addition to COVID-19, on average, there were 2.6 additional conditions or causes per death."

Many on Twitter seized upon the "6%" data point to argue that the United States has been overreacting to the pandemic.

"All of this for SIX PERCENT!" tweeted conservative writer and former congressional candidate DeAnna Lorraine. Another former congressional candidate, this one a veteran and self-described "Torah Observant Christian" named Nick Moutos, tweeted "#Fact Only 6% of reported #COVID19 deaths were "from" the virus. The other 94% were from other comorbidities. Death toll actually near 10K, or roughly .003% of the US population. #SixPercent"

A self-described pro-Trump political candidate in Virginia, Jason Alexander Roberge, tweeted that "I was called a conspiracy theorist in March for calling out the FAKE covid numbers: 6% Six Percent."

Perhaps most shockingly, a Twitter account called The Cain Gang — which describes itself as "formerly run by Herman Cain, now supervised by his team and family" — tweeted that "it looks like the virus is not as deadly as the mainstream media first made it out to be." That tweet was later deleted. Cain died of COVID-19 on July 30.

These tweets all reflect a profound misunderstanding of what "comorbidity" means, Dr. Alfred Sommer, an epidemiologist and dean emeritus at Johns Hopkins Bloomberg School of Public Health, told Salon by email.

"People with co-morbidities die at higher rates, as do older people (some without serious co-morbidities but with aging, less responsive immune systems)," he wrote. "None of which makes any difference — if these people had not contracted COVID they would not have died at this time! So they are ALL COVID-caused deaths."

Sommer believes the number of deaths attributed to the pandemic has actually been underestimated, as many who were ill — either with COVID-19 or something else — were unable to seek care because of the public health situation.

"Nobody counts the increase in the number of deaths caused by the pandemic — but not directly by infection: people who had heart attacks and related who couldn't get care, or were afraid to seek care, because of COVID," Sommer added. "The rate of these deaths has been running substantially higher this year than in past years."

Dr. Anthony Fauci, director of the National Institute of Allergy and Infectious Diseases, weighed in on the "6%" meme on live TV. Speaking to ABC's "Good Morning America" on Tuesday, Fauci emphasized that the claims about COVID-19 killing fewer people than previously believed are inaccurate.

Fauci explained that the six percent statistic only referred to people who "had nothing else but just Covid." "That does not mean that someone who has hypertension or diabetes who dies of Covid didn't die of COVID-19," Fauci added. "They did. So the numbers you've been hearing — there are 180,000-plus deaths — are real deaths from COVID-19. Let (there) not be any confusion about that."

Dr. Eric Feigl-Ding, senior fellow at the Federation of American Scientists, called the "6%" meme "a ludicrous misunderstanding and misinformation." "Basically, [they are] arguing that if you die with COVID and have any risk factors, then it somehow doesn't count as COVID," he told Salon. Feigl-Ding compared the situation to that of cancer patients, who frequently have compounding conditions that increase their risk of dying of cancer.

"Most cancer patients have many other risk factors, which by their logic means a person didn't die of cancer if someone has anything else," he said.

Dr. Justin Lessler, an associate professor of epidemiology at Johns Hopkins Bloomberg School of Public Health, also told Salon that the six percent figure needs to be viewed in an appropriate context.

"The 'six percent' figure represents those people with only COVID-19 on their death certificate. This will be very unusual," Lessler explained by email. "First, COVID-19 causes many of the co-morbidities mentioned, which are respiratory conditions. So, having, for example, respiratory failure on your death certificate in addition to COVID-19 is not really having another cause of death, as your coronavirus infection almost certainly caused the respiratory failure. Second, many of the other co-morbidities, such as heart disease, are common in the US and increase your chances of dying from COVID-19, so may be contributing factors to death but not necessarily the root cause."

He concluded, "The most important thing to remember, is that no matter what the co-morbidities listed are, pretty much all of these people would have lived longer, probably a lot longer, if they had not been infected with the virus."

Dr. Georges Benjamin, executive director of the American Public Health Association (APHA) and former secretary of health in Maryland, confirmed to Salon by email that the six percent figure is being characterized "incorrectly."

"The 6% figure was the percent that did not have any other diseases listed on the death certificate as a contributing factor for their death. That does not tell us what the risk to the U.S. population is," Benjamin explained by email. "Approximately 40% of the U.S. population have at least one chronic disease (~130 million people [out of] 330 million). That means 40% (130 million) of the country is at risk of getting severe disease if they get infected with SARS-CoV2 the virus that causes COVID-19. That is a significant risk to the overall population. COVID-19 was a contributing cause for the death and may have been the precipitating cause of death."

He added, "The way they are interpreting the 6% figure implies that the individual would have died from their underlying disease regardless of the SARS-CoV-2 infection, which you cannot say."