The Fox host repeatedly tried to save the president, even as he compared the Jacob Blake shooting to a golf putt 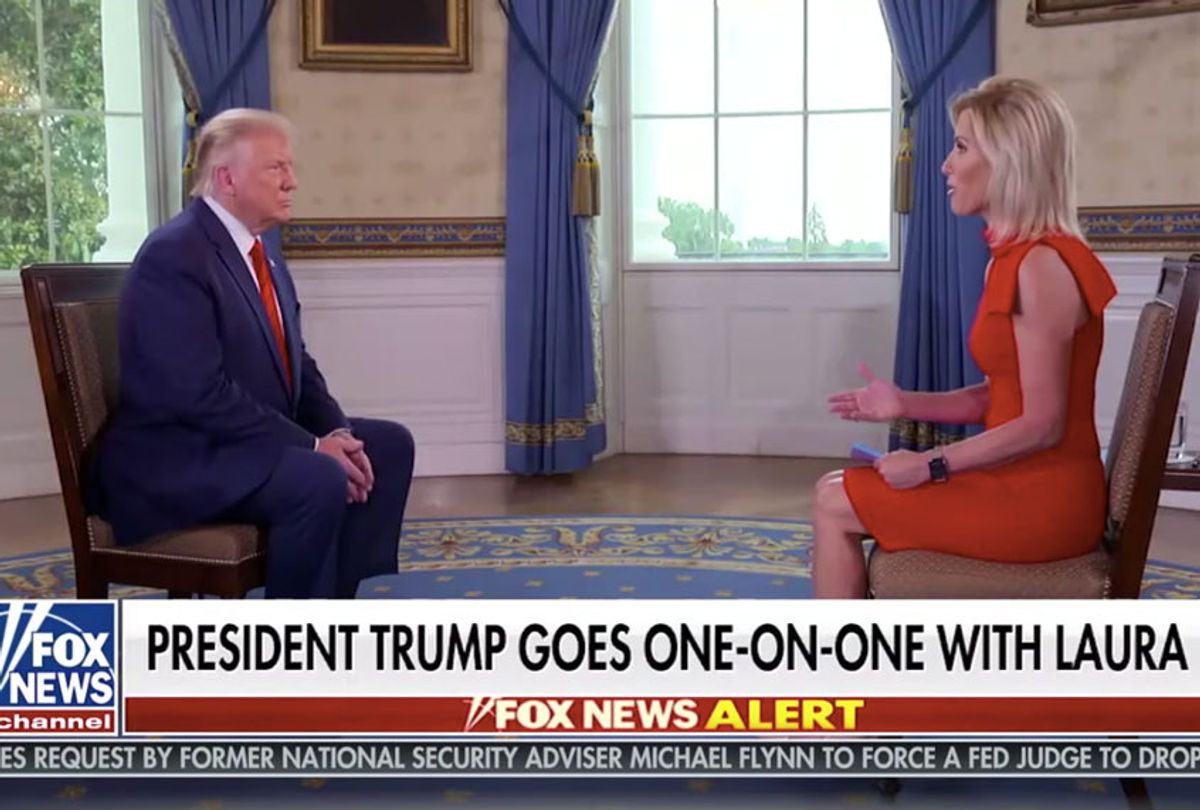 Trump, who has struggled to paint longtime moderate Democrat Joe Biden as some sort of radical by linking him to Sen. Bernie Sanders, I-Vt., went further in the interview by pushing a baseless claim that mysterious shadow people are controlling the Democratic nominee.

"He's not controlling anything," Trump said of Biden.

"Who do you think is pulling Biden's strings?" Ingraham asked. "Is it Obama people?"

"People that you've never heard of, people that are in the dark shadows. People that—" Trump replied before Ingraham interjected.

"What does that mean? That sounds like a conspiracy theory," she said. "Dark shadows. What is that?"

Ingraham asked Trump to explain the bizarre plot he described, but the president demurred.

"I'll tell you sometime," he said. "But it's under investigation right now."

Trump added that there were "a lot of people" on the plane heading for the Republican National Convention to "do big damage."

The Washington Post's Katie Shepherd noted that Trump's claim was oddly similar to "debunked rumors of a plane filled with black-clad rabble-rousers setting out to harass right-leaning towns and suburbs" that spread on social media, except the president is now claiming they were headed for his convention.

Trump also compared police officers who shoot civilians to golfers who miss putts while discussing the shooting of Jacob Blake, prompting Ingraham to try to save him again.

"Shooting a guy in the back many times…I mean, couldn't you have done something different, couldn't you have wrestled him? In the meantime he might have been going for a weapon. You know there's a whole big thing there," he said. "But they choke. Just like in a golf tournament they miss a three-foot putt–"

"You're not comparing it to golf, because of course that's what the media would say," Ingraham interrupted.

Elsewhere in the interview, Trump tried to link low-income housing to crime in the suburbs.

"You're not saying that poor people are criminals though," Ingraham interjected.

"No, I'm not saying that at all," Trump said. "But, there is a level of violence that you don't see."

Reporters were stunned by Ingraham's repeated attempts to bail out the president.

"Honestly, it's difficult to recall an interview in which the interviewer spent so much time interjecting to try and save the interviewee from himself," wrote The Daily Beast's Sam Stein.

Trump repeatedly blamed Biden for acts of rioting and violence after he and other Republicans continued to push a false claim that the former vice president had not condemned the criminal acts.

Biden hit out at the false claims on Monday, arguing that Trump "long ago forfeited any moral leadership in this country."

But while Biden condemned the violence, the president refused on Monday to denounce the Trump supporter charged with killing two people in Kenosha, Wisconsin last week.

"He may believe mouthing the words law and order makes him strong, but his failure to call on his own supporters to stop acting as an armed militia in this country shows you how weak he is," Biden said on Monday. "Does anyone believe there will be less violence in America if Donald Trump is re-elected?"

Biden also hit out at Trump's baseless claim that he was being controlled by radicals.

"You know me. You know my heart, and you know my story, my family's story," he said. "Ask yourself: Do I look to you like a radical socialist with a soft spot for rioters? Really?"