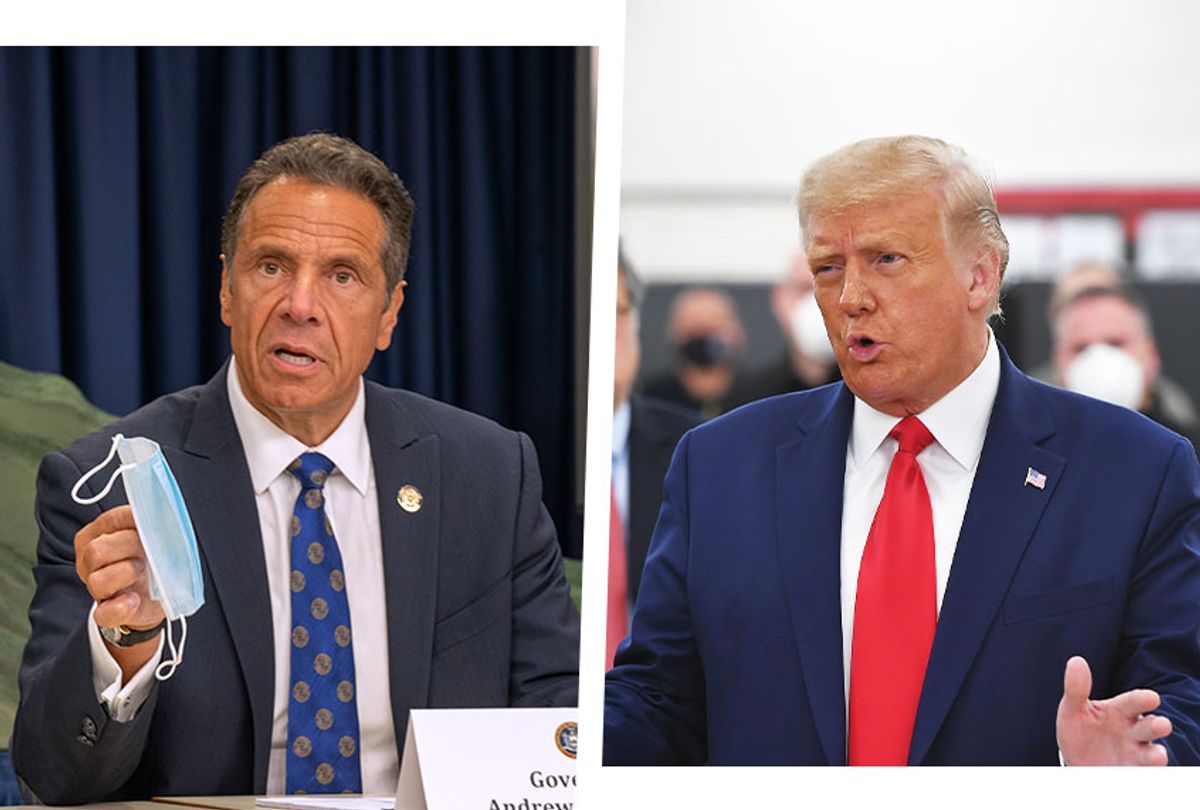 New York Gov. Andrew Cuomo warned that President Donald Trump would need an "army" to walk the streets of New York City again in response to the administration seeking to cut off federal funding to cities led by Democratic mayors.

Trump on Wednesday issued a directive instructing federal agencies to begin the process of cutting federal funds to New York City; Washington, D.C.; Seattle and Portland in response to what he called "anarchist jurisdictions" that have allowed "lawless" protests and a rise in crime.

The president's move appears to be a campaign gambit as even Fox News polls show him trailing significantly in states he won in 2016. Trump issued the memo in his attempt to make "law and order" the "centerpiece of his re-election campaign," according to the New York Post, which first reported the move.

"My Administration will not allow Federal tax dollars to fund cities that allow themselves to deteriorate into lawless zones," the directive said. "To ensure that Federal funds are neither unduly wasted nor spent in a manner that directly violates our Government's promise to protect life, liberty, and property, it is imperative that the Federal Government review the use of Federal funds by jurisdictions that permit anarchy, violence, and destruction in America's cities."

The memo called on agencies to report federal funding to the four cities that can be cut and instructs Attorney General Bill Barr to develop a list of "anarchist jurisdictions" that "permitted violence and the destruction of property to persist and have refused to undertake reasonable measures."

The memo does not require Barr to include the four cities, which the Post noted was "possibly for legal reasons."

The memo says that White House budget director Russ Vought must then issue guidance to agencies "on restricting eligibility of or otherwise disfavoring, to the maximum extent permitted by law, anarchist jurisdictions in the receipt of Federal grants."

The memo, which repeatedly names New York City Mayor Bill de Blasio, blames officials for allowing "violence to spike" while moving to slash police funding and rejecting Trump's offer to send in federal law enforcement. The crime spike in New York City featured prominently at the Republican National Convention with former Mayor Rudy Giuliani leading criticism of de Blasio, even though the higher crime rate this year is far lower than it was during Giuliani's reign. Many cities across the U.S. have dealt with a rise in violent crime amid the pandemic.

The memo also accused Washington Mayor Muriel Bowser of allowing "rioters and anarchists to engage in violence and destruction" and blames Portland Mayor Ted Wheeler and Seattle Mayor Jenny Durkan for vandalism and protests that led to violence. All of the mayors have been highly critical of Trump and have blamed him for stoking violence.

"As a result of these State and local government policies, persistent and outrageous acts of violence and destruction have continued unabated in many of America's cities, such as Portland, Seattle, and New York," the memo says.

De Blasio vowed to challenge the president's directive in court during a news conference on Thursday while criticizing Trump's response to the coronavirus pandemic.

"Mr. President. We asked you to help New York City and you weren't there for us," he said. "You failed us. And now you want to punish us? It makes no sense. And by the way, your words don't carry much weight on this topic, because the Supreme Court has spoken."

"This is a racist campaign stunt out of the Oval Office to attack millions of people of color," press secretary Bill Neidhardt added in a statement.

Durkan called the move an "attempt to distract" from Trump's handling of a pandemic that has killed more than 185,000 people and "destroyed the American economy."

"The only anarchy zone in America, where the rule of law is disregarded, is at the White House," she said on Twitter. "The President's actions continually harm cities and the millions of residents who live there. At a time when our nation desperately needs healing, a cure to the virus and a federal government to lead us through this crisis, the President invents yet another way to divide."

Wheeler called the directive a "new low, even for this president."

"He continues to believe that disenfranchising people living in this country to advance his petty grudges is an effective political strategy. The rest of us know it is dangerous, destructive, and divisive," he tweeted, adding that Trump's plan threatens to cut funding for "health, education, and safety net dollars Americans are relying on to get through this pandemic and economic crisis."

"This is a campaign document coming out of the White House," Sam Berger, a former White House official in the Obama administration, told The Washington Post. "Any actual restriction on funding in court will immediately be sued and almost certainly struck down."