McEnany played the video on a loop, even after Trump has repeatedly ignored a variety of coronavirus rules 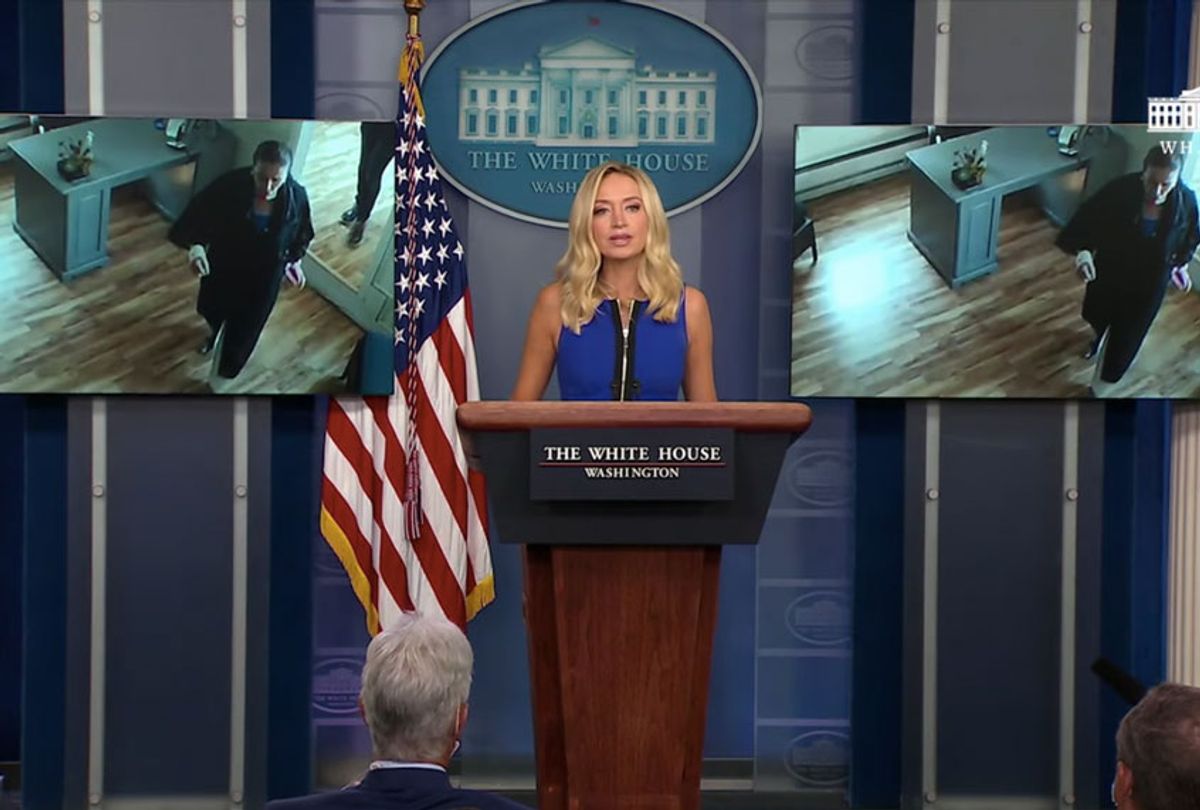 McEnany kicked off Thursday's White House briefing by playing a video obtained by Fox News showing a maskless Pelosi getting her hair done at a San Francisco salon that was supposed to be closed under local rules.

"We will be playing the video on a loop for all of you to see during the duration of this introduction," McEnany said. "Apparently, the rules do not apply to Speaker Nancy Pelosi. She wants small businesses to stay shut down but only reopen for her convenience."

She then accused Pelosi of holding up a $1.3 trillion coronavirus relief bill proposed by Republicans that includes money that "would support businesses like this hair salon," even though House Democrats passed a $3 trillion relief bill back in May, but Trump and Senate Republicans allowed unemployment benefits and other relief measures to lapse rather than vote on the package.

Pelosi claimed that she was "set up" by the salon owner and said she deserves an apology even though her visit violated local guidelines just days before salons were allowed to accept clients outdoors.

"Nancy Pelosi is demanding an apology from a single mother and small business owner who has received threats since Nancy Pelosi's comments against her salon," McEnany said. "Nancy Pelosi, you ought to apologize to the American people, or better yet, come back to Washington and get to work for hardworking Americans like this salon owner who you maligned and demanded an apology from."

Trump also taunted Pelosi over "easily" she was "set up", later adding, "Maybe the Beauty Parlor owner should be running the House of Representatives instead of Crazy Nancy?"

While criticism aimed at Pelosi by business owners affected by local health order shutdowns should come as no surprise, the White House attack is ironic, given that McEnany has repeatedly defended Trump's violations of coronavirus restrictions and even his own White House guidelines.

Trump violated Atlanta's mask mandate when he visited Georgia in July and Washington, D.C.'s mask mandate that same month. He mocked New Jersey's guidelines when members of his Bedminster golf club were seen violating the state's restrictions on large gatherings and masks. The president has repeatedly flouted his own administration's coronavirus guidelines at the White House and held a rally in Tulsa, Oklahoma, against the advice of health officials. Former Republican presidential candidate Herman Cain died from coronavirus complications weeks after attending the rally without a mask.

While many Republicans have criticized Pelosi, some Republican congressional staffers say they have been forced to come into work and told not to wear masks on Capitol Hill.

The blowup over Pelosi's blowout came after ESalonSF owner Erica Kious provided surveillance video of her visit to Fox News.

"It was a slap in the face that she went in, you know, that she feels that she can just go and get her stuff done while no one else can go in, and I can't work," Kious told the network.

Pelosi claimed on Wednesday that she was given an incorrect version of the rules from the salon even though its closure was mandated by local restrictions.

"I take responsibility for trusting the word of the neighborhood salon that I've been to over the years many times, and when they said, 'We're able to accommodate people one person at a time.' I trusted that," Pelosi said.

Kious rejected Pelosi's claim that she was "set up" in an interview with Fox News' Tucker Carlson.

"This isn't even political," she said. "She's been coming in there ... it's the fact that she actually came in, didn't have a mask on, and I just thought about my staff and people not being able to work and make money and provide for their families, and if she is in there comfortably without a mask and feeling safe, then why are we shut down? Why am I not able to have clients come in?"

But Pelosi's stylist, who rents a chair at Kious' salon, issued a statement backing the speaker's claims. Her attorney said in a statement that Kious herself "is seen on photographs and video footage styling various clients' hair, ignoring social distancing guidelines, and not wearing protective equipment (masks), as recently as a few days prior to Speaker Pelosi's arrival at eSalon on August 31, 2020."

"The fact that Ms. Kious is now objecting to Speaker Pelosi's presence at eSalon, and from a simple surface-level review of Ms. Kious' political leanings, it appears Ms. Kious is furthering a setup of Speaker Pelosi for her own vain aspirations," the statment said, adding that Kious "took a special interest in the appointment" and blamed Pelosi for her business being shut down even though the order came from Governor Gavin Newsom and San Francisco Mayor London Breed.

Breed defended Pelosi on Wednesday, arguing that it was "really unfortunate" that the incident has received a lot of media attention given the "fact that we basically have a dictator in charge of running this country."

"It's unfortunate that this conversation has blown up in the way that it has and distracted from the real issue," she added. "We don't have good solid federal leadership helping us facilitate this COVID response … We have bigger issues as it relates to this country."

Still, some observers argued that Pelosi did "enormous" damage by failing to adhere to pandemic guidelines at a time when Democrats have sought to draw a clear contrast with Republicans by backing actual medical advice.

"In the culture wars where everyone's hypersensitive to any transgression on either side, I can see this fitting into a narrative that Democrats want a different set of rules for themselves," longtime California Democratic adviser Rose Kapolczynski told the Los Angeles Times. "But it's one haircut. It's not going to have a huge impact on the election."