The most dangerous man in America: Bill Barr will do anything to help Trump win

In his CNN interview this week, the attorney general quit pretending: He'll be a Trump warrior to the end 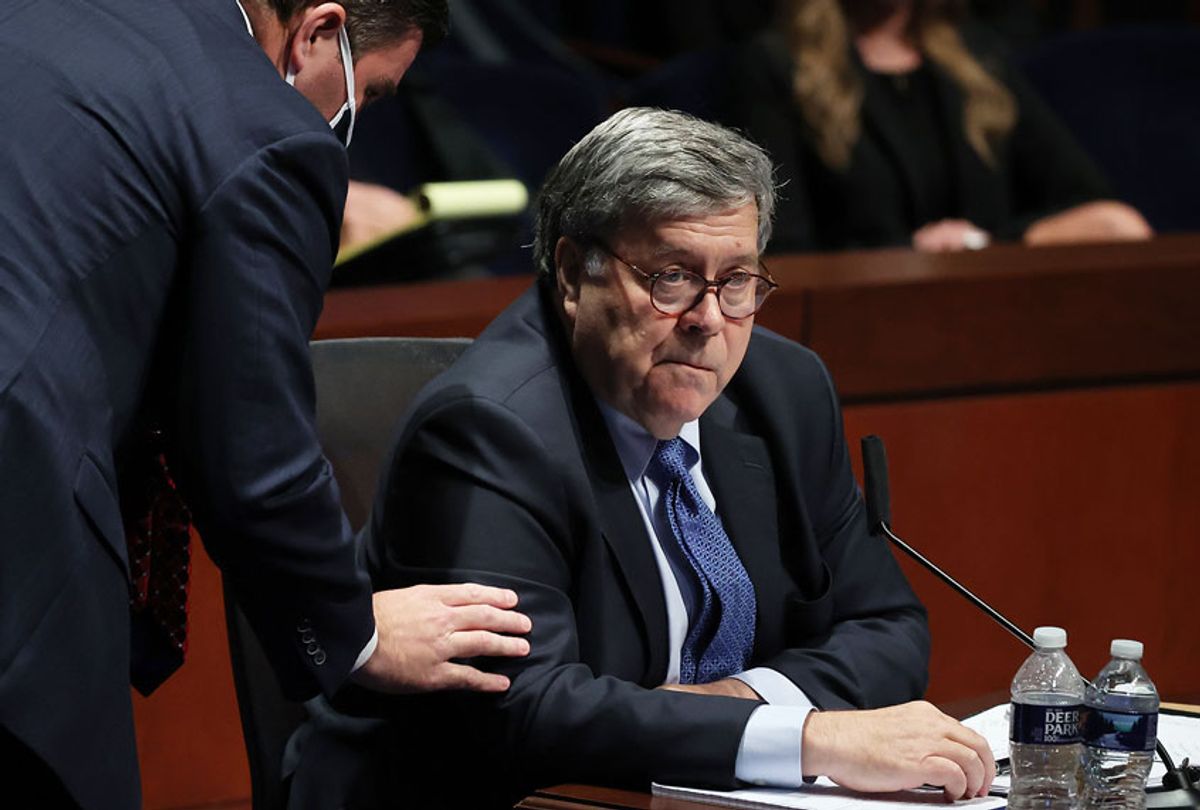 Many of us have long warned that this fall would see a dirty campaign without precedent, that Donald Trump would stop at nothing to foment chaos, and so forth. But up till now there has been a certain abstractness about it. Who knew exactly what form it would take and whether it would have any real effect?

It's here, and it's not abstract any longer. What was assumed to be just more of the usual Trump lunacy is starting to feel terrifying. He and his campaign really are pulling out all the stops and they are doing it in the middle of a deadly pandemic that has ravaged the people and destroyed the economy. Creating even more disorder and turmoil in middle of this crisis, in an effort to concoct or create an electoral victory he will not have earned legitimately, is over-the-top even for him.

This week the president gave a number of interviews and rallies in which he sounded more unhinged than usual. In fact, they were so bad that if his plans only depended upon him, we could probably feel a bit reassured. Unfortunately, his henchmen all seem to be on board and none more so than Attorney General Bill Barr, who appeared on CNN Wednesday and signaled that he's prepared to enlist the Department of Justice and federal law enforcement in Trump's election chaos strategy.

Barr always has an arrogant, supercilious attitude, whether he's facing Congress or members of the media. But he was downright angry with anchor Wolf Blitzer and it took him off his usual game. More than any other interview I can remember, this one revealed that Barr's insolence is actually cover for the fact that he really doesn't know what he's talking about. The man who once told the New York Times that investigating the silly, manufactured Clinton-related Uranium One "scandal" was more justified than any probe into Russian interference in the 2016 election still sees the world from the perspective of a Fox News viewer, rather than as the leader of the federal government's most powerful law enforcement agency. And like his boss, Barr is much too egotistical to have a clue how ignorant that makes him.

He showed how little he knows or cares about the ethics of his position by saying that he wouldn't talk about the case of Jacob Blake case (the Black man in Kenosha, Wisconsin, who was shot seven times in the back by a police officer) and then proceeded to share his conclusion that Blake was armed and in the process of committing a felony. When Blitzer pointed out that this was not established fact, Barr came back with "I've stated what I believe ..." In other words, he was prejudging the facts of the case on television, which totally taints the Justice Department's investigation.

He couldn't simply say, "I won't comment on the case because the department is investigating," as any other attorney general would have done. That was because Barr clearly has a political agenda, which became more explicit as he went on to deny the existence of systemic racism. He said that "the narrative that the police are on some, you know, epidemic of shooting unarmed Black men is simply a false narrative and also the narrative that that's based on race." He elaborated on this by saying that Black men are stopped more often by police is not the result of racism but rather of "stereotypes" about Black people being criminals. In other words, he doesn't even know what racism is, nor does he have the self-awareness to know that his own antediluvian attitudes are racist — another thing he has in common with President Trump. (I really shouldn't have to say this, but Barr is wrong about all of this.)

Barr blatantly lied when he said that Russia hasn't been interfering in the election up until now and that China is a greater threat to the integrity of the process, despite the fact that the U.S. intelligence community and the FBI have said the opposite. Indeed, the very next day the Department of Homeland Security issued a bulletin saying it has high confidence that "Russian malign influence actors" have targeted the absentee voting process "by spreading disinformation" since at least March:

Russian state media and proxy websites in mid-August 2020 criticized the integrity of expanded and universal vote-by-mail, claiming ineligible voters could receive ballots due to out-of-date voter rolls, leaving a vast amount of ballots unaccounted for and vulnerable to tampering. These websites also alleged that vote-by-mail processes would overburden the U.S. Postal Service and local boards of election delaying vote tabulation and creating more opportunities for fraud and error.

The attorney general must be on their mailing list because these were exactly the arguments he set forth in the CNN interview, at one point getting very testy with Blitzer on the subject. He insisted that the nation is "playing with fire" by changing the method of voting in this election, fatuously insisting that it will cause people to lose faith in the process — which of course is exactly what he is doing in spreading this hysterical propaganda.

When Blitzer asked him about Trump's recent exhortation to his voters to vote by mail and then go to the polls to try to vote again, the attorney general said he couldn't comment because he didn't know the laws in individual states, as if any of them allowed voting twice in the same election. When quizzed about how many cases of voter fraud the Justice Department is pursuing, he said he didn't know, although he did mention one case that purportedly had 1,700 cases of mail-in voter fraud. That story was totally wrong and the DOJ had to issue a correction saying Barr had been given incorrect information.

Barr's most ludicrous contention was that foreign countries are going to counterfeit ballots and mail them in. He has no evidence other than what he calls "logic" to back up this ridiculous claim, which proves how divorced from reality the attorney general of the United States actually is. The Washington Post's Philip Bump explains:

For one thing, any number of those ballots would conflict with existing submitted ballots and be rejected. For another, ballots meet particular design and production standards that would need to be matched. But most important, ballots submitted by mail are validated upon receipt, usually by matching the ballot's signature to the recorded signature for the voter. As a forgery expert with whom we spoke in June made clear, this would be nearly impossible to fake.

We've long known that Barr was happily performing the role of Trump's "Roy Cohn," seeing his primary role as leader of the Justice Department as leading a war against Trump's political enemies. But Barr is also a true believer, not just a cynical fraud. His willingness to distort the rule of law to benefit his patron, while at the same time falling down the rabbit hole of one right-wing conspiracy theory after another, is the very definition of Trumpism in action. And he's not even trying to hide it.