Why giant watermelon growers get hooked on their hobby: "We grow to push the limits" 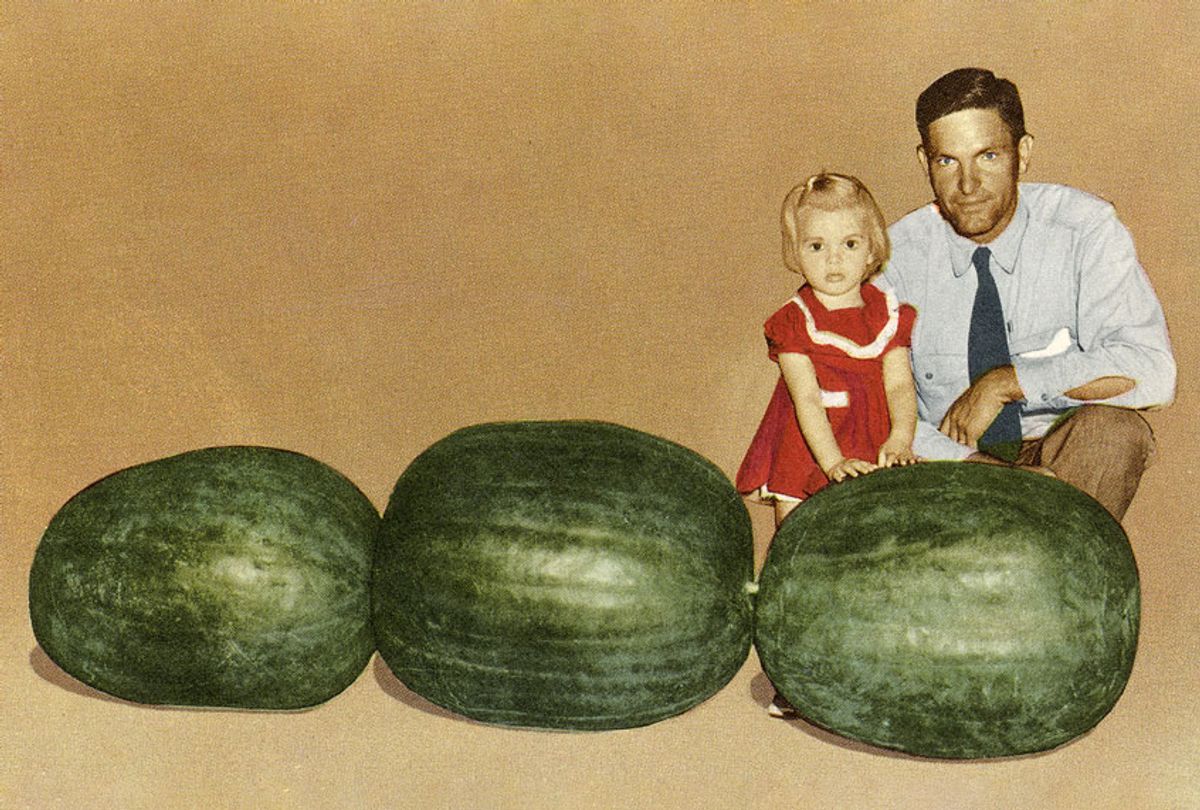 Sweet, drippy, and a tad crunchy, a bite of a watermelon evokes nostalgic feelings of balmy beach days and summer barbecues. But for a subset of amateur farmers across the country, watermelons are much more than a beloved juicy snack. They're also the center of a competitive and passionate hobby: growing giant watermelons.

Hobbyist Todd Dawson discovered what would soon become his passion when he visited the North Carolina State Fair in 2009. He was amazed by the State Fair Weigh-Off competition, where farmers show off their giant pumpkins and watermelons.

"We were there and I saw the giant watermelons, and I jokingly said to my wife, 'I'm gonna grow one of those next year, and I'm going to win the blue ribbon,'" Dawson tells Salon. "The next year I grew one, and you would have thought it was the biggest watermelon in the world — I mean I was just tickled to death with this melon."

A first-place winner receives $6 for each pound of watermelon, plus a $2,500 bonus if the world record is broken. Last place, which Dawson found himself in, usually gets 50 cents a pound.

"Nobody grows for the money, because you're gonna go broke if you did that," Dawson said. "You grow just for the pure enjoyment of — I'm going to say, 'pushing the limits,' and seeing how far you can push them."

According to the Guinness Book of World Records, the heaviest watermelon ever was grown by Chris Kent  in 2013. It weight 350.5 pounds. Hobbyists say that it was uncommon to see watermelons over 300 pounds until the last decade, but the hobby itself goes back about a century. The Encyclopedia of Arkansas claims that the country's first watermelon competition took place in 1916. In 1925, an Arkansas farmer named Hugh Laseter grew the state's first 136-pound watermelon. While growing giant watermelons over 300 pounds isn't "natural," there are a few hacks hobbyists have learned to grow these green giants.

How to grow your own giant watermelon

Dr. Todd Wehner, a distinguished professor of Horticultural Sciences at North Carolina State University who specializes in melon and gourd breeding, said so-called giant watermelons are technically defined as any watermelon weighing over 32 pounds that has been grown in a field. However, when growing these massive mutants for a contest like the North Carolina State Fair, the process looks a little different.

Usually, it starts with a giant watermelon transplant, although seeds can be bought on websites like Etsy or from growers directly. Growers who win competitions usually sell the seeds of their award-winning melons, too, which helps make up some of their expenses. These transplants can be put on a non-watermelon rootstock —like a squash — to get a bigger plant. After growing several plants, a grower will decide which one is doing best, and thin them down to the one that looks most promising. As watermelons are native to the temperate regions of west Africa, they need warm temperatures during the day and a long growing season to succeed.

"You end up with a few plants in a really large area that are growing well, with one fruit each that's growing well," Wehner explains. "A lot of times they'll put the fruit up on something to protect it from the ground — a well-trained mound of soil with plastic over it or something — [then] they'll usually put a tent over the fruit that shades the fruit from sunburn, and keep the water off of it."

Key to the watermelon's size is its roots. The branch for the fruit can be rooted multiple times. Watermelons are notoriously heavy feeders, meaning that they require more nutrients than average plants.

"They'll take the branch and put a brick on it or cover it with soil so the stem will root in multiple places, so it's not really just one plant, it's a huge plant with multiple branches rooted in multiple places," Wehner says. "And all of those branches are feeding a single fruit."

Genetics play a role in the success of a giant watermelon's size, too. Similar to growing giant pumpkins, seeds that have been bred from giant watermelons carry the genetic code for enormity. Regulating the amount of water that goes to the plant is also moderated.

"Too much water will cause the fruit to split," Wehner says. "It's a very well cared for fruit."

Back in North Carolina, Dawson explains that a lot of effort goes into one watermelon plant. "They are pampered literally from day one," Dawson says, explaining that sometimes growers will do "a tissue test where we take the sample from the plant, send it in, and it tells us the nutrient levels that are in that plant at that day." It's a bit like taking the watermelon's daily vitals.

Dawson, who now leads the Giant Watermelon Growers Club, which has about 100 members in the United States, says one year when he built a wooden structure to protect the watermelon from a tropical storm.

"That one plant gets treated like a queen," Dawson says.

Come for the melons, stay for the friends

Andrew Vial grew a 341-pound watermelon in 2019 — the second-largest watermelon ever grown. The same year, he placed first at the North Carolina State Fair. But that incredible achievement didn't come without hard work: Vial tells Salon it took six months of his life.

"Literally I spend 40 to 60 hours a week taking care of plants after my day job," which is remodeling, Vial says. One year of hard work doesn't guarantee success the next year; there could be bad weather, or a natural disaster. But it's the community that keeps him coming back.

"You just meet so many people and make so many more friends — the giant growing community friends are better friends than your regular friends," Vial says.

In a twist that wouldn't surprise Sigmund Freud, the giant melon–ogling community is mostly "male-dominated," but there are some women growers like Susie Zuerner, a 62-year-old living in North Carolina. Like Dawson and Vial, Zuerner's interest in growing huge watermelons piqued after seeing them at the North Carolina State Fair. In 2010, Zuerner grew a 239-pound watermelon. She hasn't been able to match her record yet, but for her it's not about the competition.

"It is the anticipation of what you can do, and how that plant will perform, that keeps me here," Zuerner says. "Most growers have a competitive nature to them, but they also have an intense sense of curiosity about what makes these things grow."

This year, the North Carolina State Fair was cancelled due to the coronavirus pandemic. Certainly, it's affected all of the growers' morale. September is usually the month when giant watermelon growers in North Carolina are preparing for the much-anticipated State Fair Weigh-Off competition.

"The big pushes of growth are finished by the first part of September, and now they're just doing incremental gains, maybe a couple pounds a day if you're lucky," Zuerner says. "It's not like when watermelons are young and they can grow anywhere from 3 to 8 pounds a day."

Zuerner says it's the community that keeps her participating in the time-intensive hobby though.

"There's the friendships, there are the meetings, the service, learning, and aspirational aspects of it," Zuerner says. " It's just woven into the fabric of our lives, growing these things."