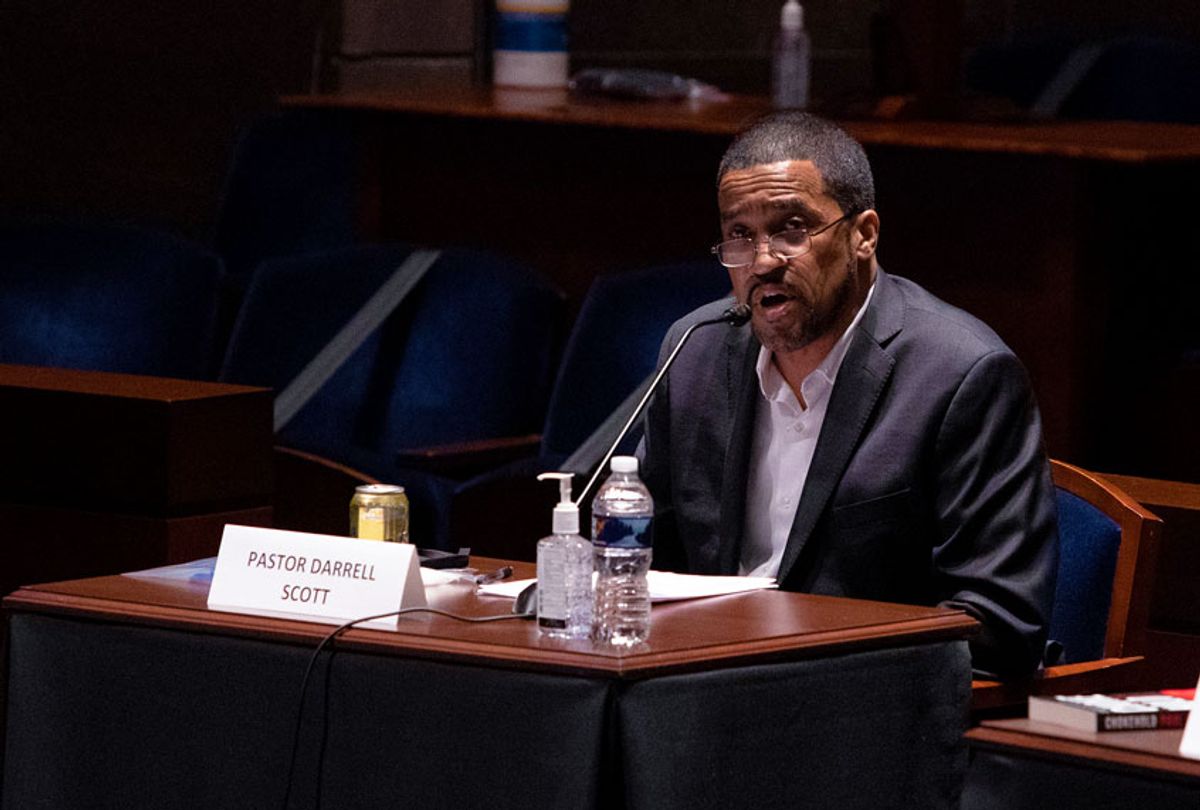 Darrell Scott, senior pastor for the New Spirit Revival Center testifies at a House Judiciary Committee hearing on "Policing Practices and Law Enforcement Accountability", on Capitol Hill, on June 10, 2020 in Washington, DC. The hearing comes after the death of George Floyd while in the custody of officers of the Minneapolis Police Department. (Graeme Jennings - Pool/Getty Images)
--

The Urban Revitalization Coalition (URC), a controversial nonprofit organization run by two of President Trump's most prominent Black surrogates, appears to have been effectively closed down this spring after reports that its cash giveaways to Black voters may have violated IRS rules governing nonprofits.

The shutdown happened before the IRS automatically revoked the group's tax status on May 15 for "not filing a Form 990-series return or notice for three consecutive years." The URC was eventually placed on the IRS "Automatic Revocation List" on Aug. 11, and, according to co-founder Darrell Scott — a Cleveland pastor closely allied to the Trump campaign — was first notified of this by CNN.

But by that time the group's corporate status had already been suspended as delinquent for five months, beginning in March, for its failure to submit an annual report or pay taxes, business filings show.

Scott, a Trump campaign adviser who has visited the White House and traveled on Air Force One, told CNN in August that URC were unaware that the IRS had pulled their status until the network contacted them.

The URC, which advocated for Trump's policies to Black audiences and claimed to seek investment opportunities in disadvantaged communities, appears never to have filed a tax return, IRS records show.

The group's other co-founder, businessman Kareem Lanier, told CNN that the URC did not receive an IRS letter because its offices had been closed due to the coronavirus pandemic, and that the status change came to the group's attention only recently. Lanier told the outlet that the URC would submit the required forms to have the status reinstated in the next few weeks.

"Our offices were closed (& still are) due to the government shutdown/quarantine because of the coronavirus therefore we did not receive the letter they sent us in May until it was brought to our attention a few days back," Lanier said.

It appears that the group would need to do more than that, however: Its Delaware business registration expired on March 2. The state declared the group delinquent due to failure to file its annual report and failure to pay taxes, and the URC will have its corporate status rendered inactive if it does not make good on those requirements.

Until then, the URC is closed for business in the eyes of the law, and has been for months.

Scott has since ramped up his work with the Trump campaign as the president's leading Black surrogate and co-chair of Black Voices for Trump, an official arm of the campaign formerly helmed by the late Herman Cain.

In 2018, Scott and Lanier appear to have used the URC as a channel for an off-the-books foreign influence campaign, lobbying the White House on U.S. trade policy with Turkey and in the interest of opening domestic markets in economically disadvantaged communities to foreign manufacturing and real estate investment.

As part of the effort, the group solicited what it construed as "donations," including from foreign nationals, according to multiple sources and communications reviewed by Salon. Those donations would, if received, appear to have effectively functioned as lobbying fees in exchange for access and promotion in the U.S. government, experts say.

Scott and Lanier boasted on social media about introducing a Turkish trade representative named Ali Akat to influential people in the government, which Akat echoed in his own posts and in interviews in Turkish press.

"[We] began our plans to build the Turkish lobby in America. We are striving to create it in the American market with manufacturers, which will go to the new America from Turkey," Akat said in one interview published in Turkey, following his collaborations with the URC.

The URC operates a largely broken website: It can't be accessed directly, only through backlinks, and the "donations" button does not work: It lists a fake phone number also tied to a cemetery in suburban Cleveland, and the email address bounces messages back to the sender.

The site does have a page that purportedly allows applicants to become URC "partners." Interested parties are supposed to submit a form saying how much capital they want to invest in the nonprofit, and must also upload "proof of funds."

But the site does not provide instructions for filling out the form, and does not clarify what is meant by "proof of funds."

Brett Kappel, a top national authority on tax and lobbying law, told Salon he had never seen a donor form like this.

The URC set itself two tasks: Facilitating investment in Opportunity Zones and getting Trump re-elected. The more legitimate of those two projects was the investment program, given that as a charity the URC was barred from political activity. Ostensibly Opportunity Zones offer tax incentives to businesses that invest in designated communities, in the form of breaks on capital gains taxes, including on real estate.

Scott and Lanier created the URC on July 10, 2017, Delaware records show. According to multiple people familiar with the group's activities, the URC was created chiefly as a way to monetize another pro-Trump group with which they'd previously been involved, the National Diversity Coalition for Trump, or NDCTrump.

NDCTrump, where Scott and Lanier also serve as officers, was the brainchild of former Trump attorney Michael Cohen. He conceived of the group during the 2016 campaign as a way for Trump to appeal to minority voters, who were clearly not a major focus of the president's campaign.

Cohen and Trump later turned on each other after the former pled guilty to various offenses and testified before Congress. Cohen has repeatedly called the president "racist," including in detailed passages from his new book, "Disloyal." NDCTrump members also turned on Cohen — specifically, following the federal raids that seized electronic devices from his offices and residences — as Salon's earlier reporting details.

NDCTrump was barred from accepting money, but the URC, structured as a 501(c)(3) nonprofit charity, could take contributions — including from foreign sources, without having to publicly disclose its donors.

Since the URC has not filed any tax returns, however, the government and the public can't see how much money the group raised or how that money was spent. The one definite fundraising data point was a $238,000 grant in 2018 from America First Policies, the dark-money affiliate of the pro-Trump super PAC America First Action. America First Policies does not have to disclose its donors.

There is also a spending data point. Politico first reported in January that the URC was holding giveaways in underserved communities, where it would raffle off cash prizes allegedly at random. The giveaways raised concern among watchdog groups that the URC was in violation of the terms of its nonprofit status, and Democrats in Ohio asked the state to open a criminal investigation at the end of February.

On Feb. 29 the URC postponed indefinitely a $50,000 cash giveaway it had scheduled in Cleveland, and it slipped into delinquency in Delaware two days after that. The IRS revoked the group's charity status two months later.