"Lyft and Uber didn't step up for us": Drivers protest Uber's solidarity ads, saying that it's all performative 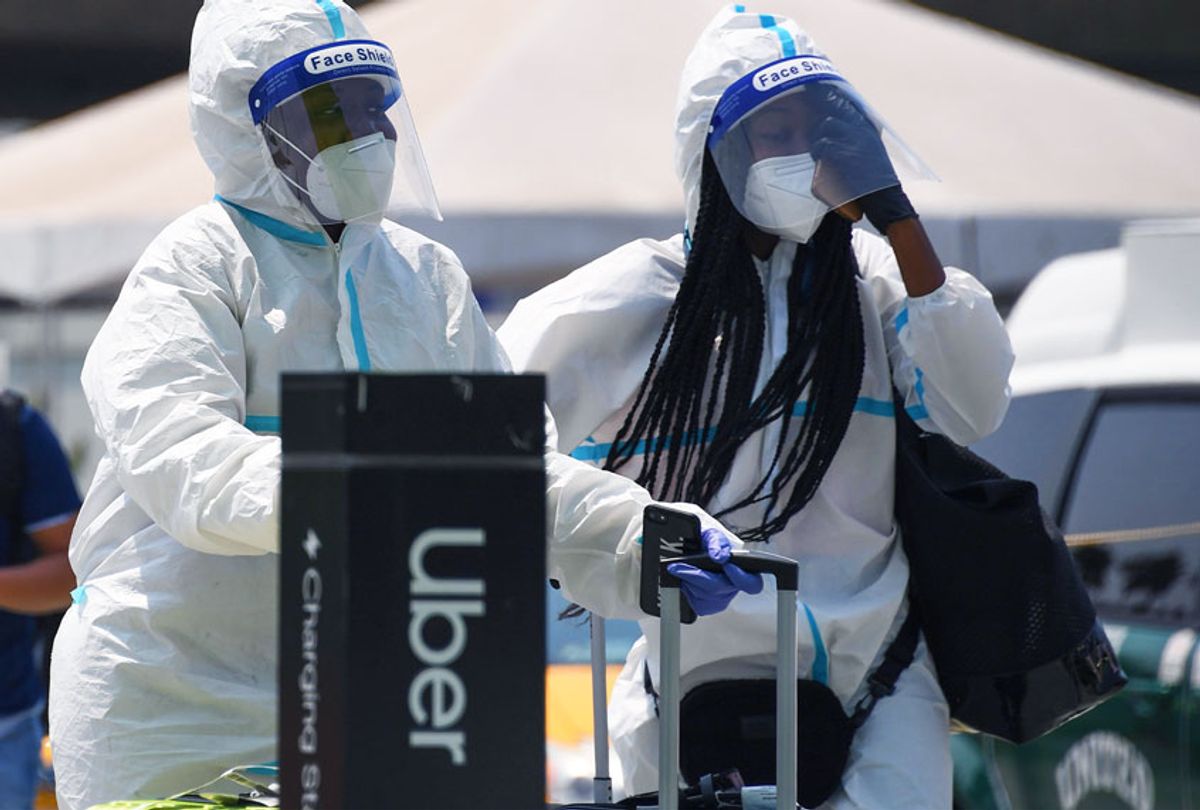 Protesters gathered in Oakland on Wednesday to denounce Uber for placing billboards in 13 major cities that say, "If you tolerate racism, delete Uber."

But their grievance was not with the idea that racism is wrong. To the contrary, the organizers and rideshare drivers with whom Salon spoke say that ridesharing companies like Uber do not practice what they preach — that they are, in effect, co-opting social justice rhetoric for public relations purposes.

"I know Lyft and Uber," Cherri Murphy, an Oakland resident and minister who says she has driven over 12,000 rides and has been a Lyft driver for roughly three years, told Salon. "A lot of folks know that essential workers are delivery people, rideshare drivers, folks that look like me, so they're predominantly African American and people of color. We are pretty much the ones who are on the frontlines of the crisis and among the hardest hit financially, so as rideshare drivers, we do the work that's been essential, and it's been essential long before the pandemic hit."

"When the pandemic hit, we stepped up for ourselves and for our communities, but Lyft and Uber didn't step up for us," said Murphy.

Murphy claimed that workers were not given protective equipment (PPE), face masks, hand sanitizers and other protective measures for either themselves or their passengers. (The company claims that they have given workers a "payout" to reimburse them to buy their own PPE.)

As rideshare requests plummeted at the start of the pandemic, Murphy added that Uber has failed in its mission to help its workers with less work. "As it relates to unemployment insurance, when it comes to them not putting in their share of unemployment insurance in the middle of a pandemic, they left many of their employees without protection or income on average of three months or more," Murphy said.

Indeed, as Uber's primary labor force of drivers is comprised entirely of contractors, Uber and other similar contractor-reliant platforms have not been paying taxes into the state's unemployment insurance fund for those workers. In some states, the state government has been paying out unemployment claims for the workers rather than their former employers; in others, newly unemployed or underemployed Uber drivers can't access unemployment benefits at all.

Murphy described how rideshare gig workers are forced to "work late night hours, weekends and holidays, no paid overtime for our work," and accused Uber of having "increased rideshare prices in predominantly black and brown neighborhoods," a charge that is borne out by previous research studies.

One issue that looms large in the minds of California drivers is that gig economy platforms like Uber, Doordash and Lyft have spent $180 million to promote Proposition 22, an astroturf measure that would overturn a 2019 law requiring most workers to be classified as employees unless a company can prove that they are independent contractors. Uber and Lyft already threatened to practice a capital strike in California if the measure was not repealed, meaning that they would cease operations unless they were permitted to bypass the law and keep their workers as contractors rather than benefitted employees.

"I think it's hypocritical in the fact that Lyft and Uber chooses to co-opt language and a movement of black lives, that are geared towards improving the lives of us, and they're riding on our backs with their hollow words," Murphy told Salon.

"Racial justice is economic justice," Clarkson argued. "The fact of the matter is that the majority of gig workers are people of color and the conditions that make police killings of black people possible and inevitable are the same conditions that make the exploitation of Black and brown workers possible and inevitable. We reject attempts by Uber and other gig companies to separate racial justice from economic justice and we see it as an attempt to dodge their responsibility for the exploitation of your Black and brown workers everyday."

Gig Workers Rising also issued statement related to the protest, stating that if Proposition 22 is passed, companies like Uber and Lyft could terminate the employment of drivers who report harassment, discrimination or wage theft; discriminate against drivers on the basis of immigration status; and deny drivers benefits and rights including paid sick leave, disability insurance/workers compensation, overtime, work-related expenses reimbursements and state unemployment insurance.

Mekela Edwards, who says she had been a rideshare driver for the last year-and-a-half and was working for Uber until she had to shelter in place in March, echoed that sentiment. She described Uber as "tone deaf" to the pandemic. Edwards described a recent incident in which she picked up a passenger who refused to wear a mask; after speaking to the company about the incident, she said Uber "didn't have a clue" and "didn't really know what to say to me."

"I just find [the billboard campaign] a little bit ironic because of Proposition 22 overall, being that there are so many people of color and immigrants that drive with Uber," Edwards told Salon. "Proposition 22 is not a progressive proposition that would help workers and drivers to advance and to have a better quality of life. And so that, to me, overall speaks to like the racism, or I guess it's the implicit bias. Like they're willfully ignorant about how the proposition is going to affect people of color, the drivers that drive for them the most."

Uber defended its billboards and claimed that it is sincere in its anti-racism agenda, but asked not to be quoted directly. Lyft referred Salon to the media contact for the Yes for 22 campaign, which supports Proposition 22. Yes for 22 quoted Dr. Tecoy Porter, Chair of the National Action Network Sacramento Chapter, told Salon by email that a poll by The Rideshare Guy showed that 71 percent of drivers support "keeping the freedom to choose how and when to work for themselves," that a majority of ridesharing drivers are people of color and that opponents of the measure "are not only going against the wishes of these drivers, they are willing to sacrifice hundreds of thousands of jobs held by drivers of color."

University of California Hastings law professor Veena Dubal told The Sacramento Bee last month that tech companies have created alliances with similar civil rights organizations in the past, such as when they fought an ordinance in New York City in 2018.

"It is a political tactic that these companies make to make allies with more mainstream organizations," Dubal told the Bee.