Much as we love a skillful vulgarian, Katherine Ryan does not ply her wares with elegance or wit in her new show 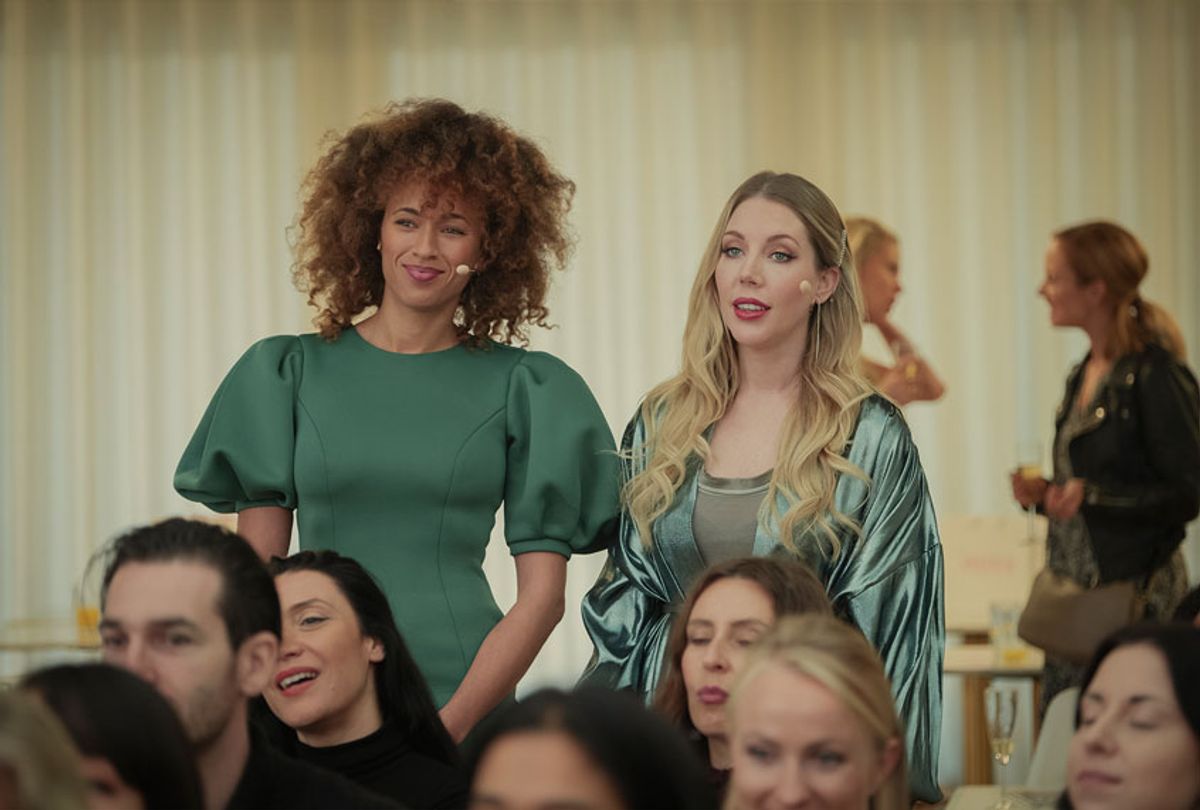 A running joke about Netflix is that if you have a pulse and decent timing, it'll probably give you a comedy special. That's not the worst sin to be accused of given the current state of the world; at this point many of us will take a laugh almost anywhere that we can get it.

Browse a few of its offerings, and one soon discovers that not every stand-up special in Netflix's library is created equal and many, including stand-up comedian Katherine Ryan, fit the descriptor of "an acquired taste."

Keeping that in mind, it's easy to see why Ryan's semi-autobiographical series "The Duchess" hits people the wrong way. Throughout most of its six episodes the U.K.-based Canadian comedian labors to stuff crass punchlines into starched settings populated by prim and etiquette-obsessed Brits. One early scene smacks us across the face with this strategy by showing Ryan's fictional alter ego escorting her 9-year-old daughter Olive (Katy Byrne) to school while wearing a sweater splashed with the advertisement "World's Smallest Pussy."

This, if one were to hazard a guess, is a sample of Katherine's personal brand as well as Ryan's.  She casts herself in "The Duchess" as a single mom whose feminist, body-positive ceramics have made her something of a celebrity in the U.K.  Or perhaps more accurately, she plied her artistic talent to extend the 15 minutes of fame she fell into by getting knocked up by Shep (Rory Keenan), a scuzzy former boy band star who drank and drugged his career into oblivion.

Katherine hates Shep, and her co-dependent relationship with Olive gives an excuse for her control issues and aversion to intimacy while also giving Olive the impression that she is more of an equal partner to her mother than, say, her "love" interest Evan (Steen Raskopoulos), a stable and successful dentist.

Evan genuinely adores Katherine, which is why he puts up with her keeping him at arm's length. Meanwhile, when Katherine decides she wants to get pregnant again, her idiot logic concludes that the most stable path is to ensure that Olives younger sibling shares the same paternal DNA…which means propositioning Shep to help her make another baby.

Katherine is awful. Shep, who espouses a philosophy of living off the grid to cover of his failure, is fairly despicable. Even Olive can be a selfish, manipulative brat when she's really on her game. None of these factors prevent "The Duchess" from being a success.  The list of comedies that spin stunning humor out of this precise se-up or ones closely resembling such a situation is longer than I could list here.

Maybe Ryan was hoping to fill the voids left by the absence of irreverent Britcoms "Absolutely Fabulous" or "Catastrophe," but what we got instead is some kind of sparkly disaster.

With defter hands at the reins "The Duchess" might have stabilized its balance between lowbrow and charming; no such luck. Between the way Ryan exaggeratedly flounces about and the blunt deliberate emphasis on her character's cool raunchiness, Katherine is about as trying as they come. And that's before Ryan forces mama Katherine's uncouth bombshells into every cranny of the script possible regardless of whether it fits.

If dick jokes were bullets, her torso would be crossed with a pair of fully-loaded bandoliers, encrusted in sequins and beads and a marabou fringe; the problem is that her aim is too frequently way, way off.

As someone who has high admiration for skillful exercises in embroidered vulgarity, I'll admit that there certainly were moments with "The Duchess" that made me laugh out loud – moments, within six half-hours. A surprise boy band performance in the finale is gloriously cringeworthy, as is an earlier conference in the headmaster's office at Olive school where we find out about the comedy lessons she's been picking up at home.

In spite of its galloping clumsiness, Ryan writes plenty of heart into the scenes she shares with Byrne, who somehow makes Olive a beacon of sweetness and a stabilizing force. Whatever success "The Duchess" can claim originates in Katherine and Olive's obvious fierce devotion to one another even though other characters point out how co-dependent they are. (Mother and daughter share the same bed, which makes Katherine's adult sleepovers awkward in the extreme.)

But the lack of elegance in establishing her interactions with the uptight fellow mothers against whom Katherine is supposed to be contrasted, or the overnight shift with which her adversary and foil suddenly becomes her friend, makes much of the humor seem forced. There's some inspired crude in here, to be sure, but you have to bust through a lot of gravelly stupidity to get to it.

Having said all that, Ryan's fans might guzzle this down as lustily as Katherine gulps down her bubbly. To everyone else, "The Duchess" is an eyeful and an earful without much reward for any pain we may experience. On the bright side, it makes committing to an hour of tepid stand-up suddenly seem reasonable.

"The Duchess" is currently streaming on Netflix.