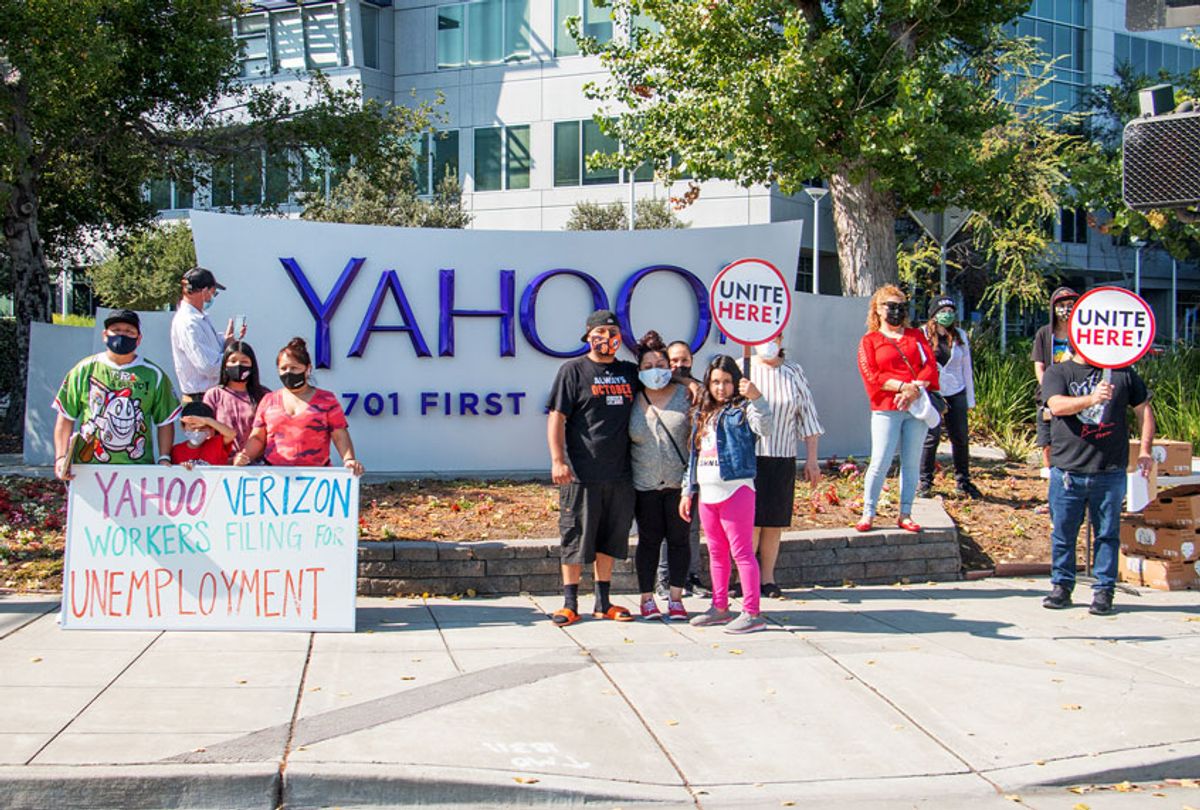 In March, as the coronavirus began its initial spread across the United States, Silicon Valley's biggest tech companies closed their doors and asked their office workers to work from home. What began as a week-long safety measure morphed into a semi-permanent telecommuting directive. Now, tech companies like Facebook have told their employees not to return to the office until July 2021. Yet while software engineers and sales professionals have the luxury to work from home, the service workers who maintained big tech campuses do not.

Lilliana Morales has worked as a prep cook at Facebook's Menlo Park campus cafeteria for six years through a subcontractor called Flagship. In March, when the Bay Area went on lockdown, Morales was told to go home. Fortunately, she's still being paid.

"The only information they told us was that we had to go home, but we were going to still receive pay and our health insurance," Morales said. "I think it's very nice of them, we need to pay the rent, we need to buy food for our family, and also, because everybody is at home I can take care of my kids and do homework with them while we are at home."

Morales told Salon she isn't sure when she'll return to the tech company's campus, but right now she is still being paid $22.20 an hour for the shifts she'd usually work.

But not all tech companies are created equally. Augustina Sanchez has worked at the Yahoo cafeteria at the Sunnyvale campus for 12 years as a front of house worker. Two weeks ago she received a letter stating that she was laid off.

"I have tried to do the best that I can to really make sure that the cafeteria has the best service, showing up every single day, and making my best effort every single day," Sanchez told Salon via a translator. "To get this news was just really upsetting and really sad, this was news that I wasn't anticipating, and so emotionally it just really made me upset, and very sad."

Economically, Sanchez said this puts her in a terrible situation as a single parent.

"My son is almost about to graduate from university, he doesn't have a secure job yet and so for me to lose my job right now, as the person supporting us, is something that's really worrisome," Sanchez said. "Unemployment isn't going to cover my full cost of my rent, and food, and so we're going to have to look at how we have to adjust and, and how to survive during the next few months."

Sanchez was one of 91 workers employed by Eurest, a subsidiary of the Compass Group, who was a subcontractor for the Yahoo-Verizon campus.

Jessica Gonzalez had been working at the Yahoo cafeteria as a barista for three years, which was her first job since she arrived in the United States from El Salvador. She said she received her letter of termination on September 4, and that it came as a surprise.

"We all have children and families that are dependent on us and dependent on our jobs, and so for Verizon to make the decision to stop paying us is affecting hundreds of people and all of all of our different family members in our community," Gonzalez told Salon through a translator. "

Salon didn't receive a response to a request for comment from Compass Group before publication to get a comment on the reasoning behind the layoffs. In a statement, Maria Noel Fernandez, campaign director for Silicon Valley Rising, expressed disappointment in Verizon — especially since it doesn't appear to be financially struggling during the pandemic.

"Verizon made over $4 billion just last quarter, but now it's taking away income and healthcare coverage from these mostly Black and Brown workers in the midst of a global pandemic," Fernandez told Salon. "Facebook, Cisco, Google, and other big tech firms are acting responsibly by devoting a tiny fraction of their billions to looking after the people who have kept tech campuses running for years — Verizon needs to step up and do the same."

Last week, many of the workers who were laid off—who are members of Unite Here Local 19—protested the layoffs outside the campus where they used to work, and publicly prepared unemployment applications.

"As the union representing food service workers in Silicon Valley, we are disheartened by Verizon's decision to put the cafeteria workers who have loyally served their campus at risk by laying them off during a pandemic," Enrique L. Fernandez, Business Manager for Unite Here Local 19, said in a statement.