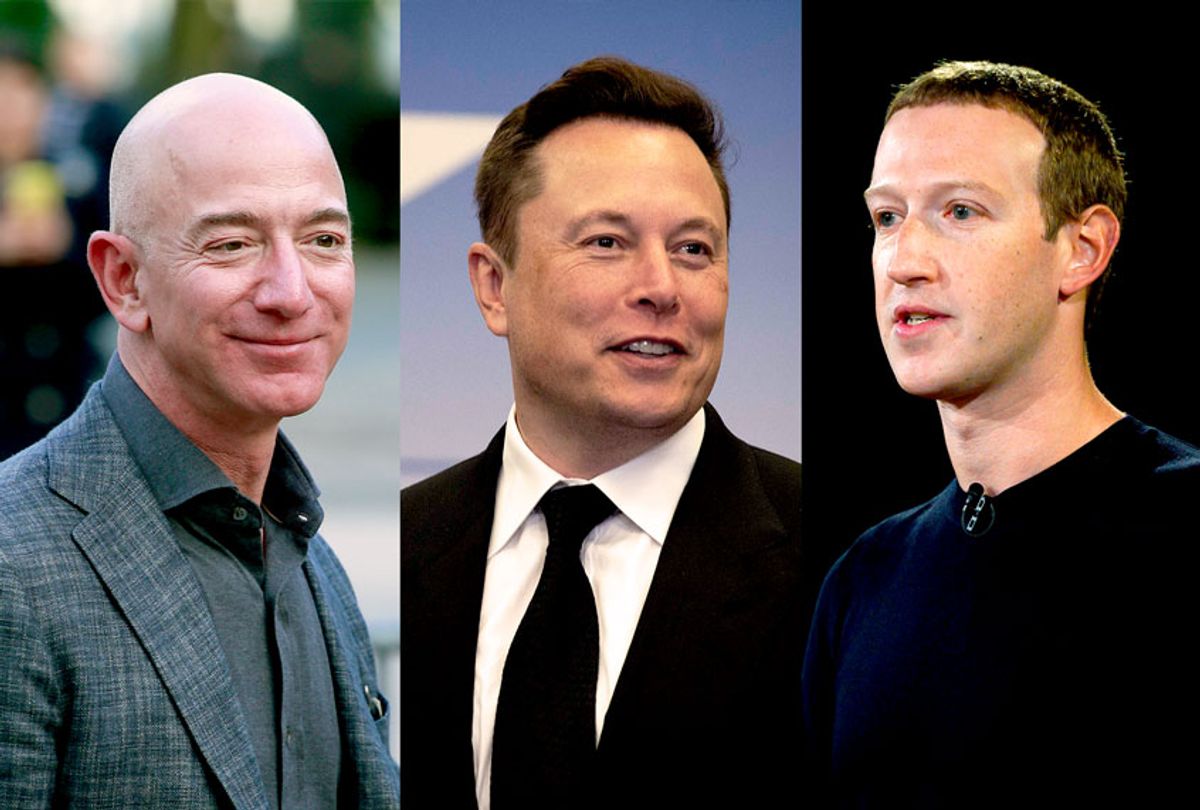 The times are a-changing in Silicon Valley. Once a reliable bastion of libertarianism from the CEOs at the top to the workers at the bottom, new schisms are forming between the workers and the owners — from white-collar software engineers unionizing at Kickstarter to Googlers and Amazon workers publicly denouncing their executives.

Yet as employees have begun to wake up to the many ways in which their employers exploited them in exchange for nap pods and free snacks, the titans of industry themselves appear to be showing their true colors. The pandemic prompted mass layoffs and swift changes in policy for many tech titans; yet coupled with the anti-police racism protests, we are starting to see the far-right soul of Silicon Valley's leaders — belying the stereotype of technology as synonymous with progressivism.

Jeff Bezos, CEO of Amazon, profited tremendously off the pandemic, seeing his wealth rise $30 billion. Yet his empire still saw fit to stop paying a $2 an hour hazard pay bonus to its warehouse workers — a high-risk job. Putting them at risk has resulted in a lawsuit from warehouse workers, claiming the company put their families at risk.

Amazon continues to try and position itself as a progressive company, unlike other big corporations. Recently, Amazon tried to show solidarity with the Black Lives Matter movement by tweeting "the inequitable and brutal treatment of Black people in our country must stop. Together we stand in solidarity with the Black community — our employees, customers, and partners — in the fight against systemic racism and injustice."

There was a tinge of irony to the statement, given the company's history of enabled authoritarian surveillance. To that end, the American Civil Liberties Union quickly replied: "Cool tweet. Will you commit to stop selling face recognition surveillance technology that supercharges police abuse?"

Bezos isn't the only CEO who treats his workers with utter disregard for safety or health. Tesla Inc. In mid-May, CEO Elon Musk announced on Twitter that he was defying Alameda County shelter-in-place order and restarting production at the Alameda County Tesla factory, which employs more than 10,000 people. On his Twitter account, Musk said he will be "on the [assembly] line with everyone else," and stated that he was willing to be arrested for the noble "cause" of restarting production. Musk filed a lawsuit against Alameda County for injunctive relief and threatened to take his factory to another state, then took a jab at the Alameda County's interim health officer, Dr. Erica Pan, whom Musk called "ignorant."

Previously, Musk expressed repeated disdain for the virus or the potential for a pandemic (i.e. "the coronavirus panic is dumb") mirroring much of the American right, who value economic activity over lives and pivoted their politics to that effect, in defiance of scientific evidence and models.

The Trumpian head-in-sand attitude coming from Musk is unsurprising. As I've written before, Musk and Trump have much in common: they're both entitled, wealthy businessmen who profit off the backs of a vast underclass — which is why Musk played the victim card when his factory couldn't operate during shelter-in-place.

Mark Zuckerberg, CEO of Facebook, has shown bitter resistance in the face of evidence that his platform has become a fount of disinformation around both the coronavirus and the ongoing Black Lives Matter protests. In an interview with Fox News last week, Zuckerberg said that he doesn't believe social media platforms should become the "arbiter of truth".

"We have a different policy than Twitter on this," Zuckerberg said in comments that first aired Wednesday. "I believe strongly that Facebook shouldn't be the arbiter of truth of everything that people say online. I think in general private companies, or especially these platform companies, shouldn't be in the position of doing that."

The comments mirror his attitude in 2017, when he commented on Facebook's role in fomenting political disinformation amid the 2016 election. "Personally I think the idea that fake news on Facebook, which is a very small amount of content, influenced the election in any way — I think that is a pretty crazy idea," Zuckerberg said then. "Voters make decisions based on their lived experience."

Zuckerberg's attitude towards the role of social media in serving as an arbiter of truth differs from his peers at Snapchat and, recently, Twitter, which made an about-face in its policies around Trump's sophistic tweets. Twitter CEO Jack Dorsey fired back at Zuckerberg: "We'll continue to point out incorrect or disputed information about elections globally. And we will admit to and own any mistakes we make. This does not make us an 'arbiter of truth.' Our intention is to connect the dots of conflicting statements and show the information in dispute so people can judge for themselves. More transparency from us is critical so folks can clearly see the why behind our actions."

Zuckerberg's inaction with regard to censoring or labeling Trump's misinformation has led up to unprecedented internal actions this week, like employees staging a virtual walkout. Facebook employees are notorious for their fealty to their CEO; internal leaks or dissent were rare, until recently.

They say the bad times bring out the best in people. In that case, it's certainly worth examining why Silicon Valley's overlords appear to be a notable exception.