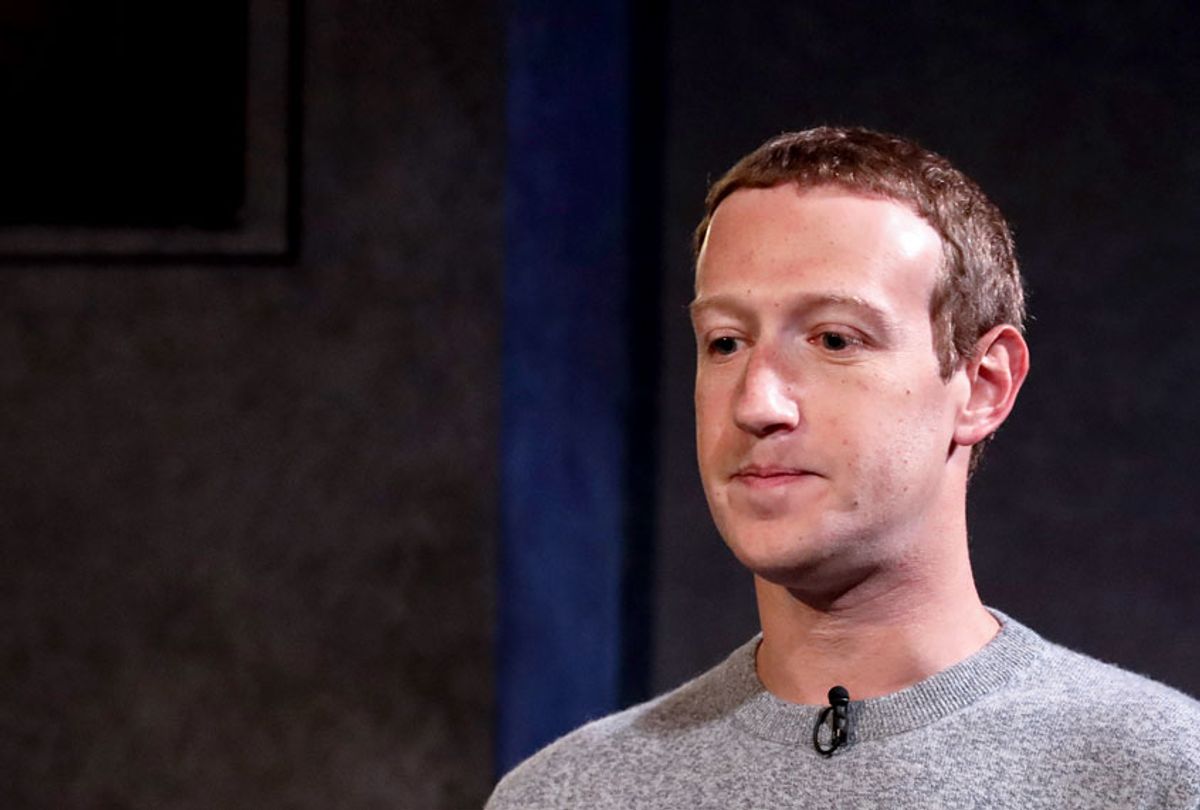 Dozens of telecommuting Facebook employees staged a virtual walkout on Monday in a rare display of defiance against their boss, CEO Mark Zuckerberg, whom they are criticizing for not taking a sufficiently strong stance against the violent and habitually sophistic content posted by President Donald Trump to their platform.

Because most Facebook employees are working from home during the pandemic, the "walkout" occurred virtually, with the participating employees requesting time off to support protesters and express their dissent with Facebook leaving up Trump's inflammatory posts last week, according to The New York Times. Some Facebook employees have threatened to resign or begun to circulate petitions.

Company insiders say that the resistance presents the most serious threat to Zuckerberg's leadership of the company since it was founded a decade-and-a-half ago.

Even as Twitter CEO Jack Dorsey added a fact-check to one of Trump's tweets and a warning label to another one last week, Zuckerberg has remained studiously neutral, arguing that he wants to preserve free speech on his platform and avoid curating content.

"We've been pretty clear on our policy that we think that it wouldn't be right for us to do fact checks for politicians," Zuckerberg told Fox News last week. "I think in general, private companies probably shouldn't be — or especially these platform companies — shouldn't be in the position of doing that."

Zuckerberg has reportedly responded to the employees' protest by moving his weekly meeting to Tuesday instead of Thursday and encouraging them to question him directly about his choices.

Andrew Crow, the head of design at Facebook, tweeted that "censoring information that might help people see the complete picture *is* wrong. But giving a platform to incite violence and spread disinformation is unacceptable, regardless who you are or if it's newsworthy. I disagree with Mark's position and will work to make change happen."

Another Facebook employee, Jason Toff, tweeted that "I work at Facebook and I am not proud of how we're showing up. The majority of coworkers I've spoken to feel the same way. We are making our voice heard."

Facebook engineer Lauren Tan echoed those views, tweeting that "Facebook's inaction in taking down Trump's post inciting violence makes me ashamed to work here. I absolutely disagree with it. I enjoy the technical parts of my job and working alongside smart/kind people, but this isn't right. Silence is complicity."

It is unclear whether Zuckerberg's position reflects an unwillingness to alienate the Trump administration or a hostility toward causes involving racial equality. In 2016 the Facebook CEO famously scolded employees who had crossed out "Black Lives Matter" on signature walls at the company's headquarters and replacing it with "All Lives Matter," writing in a post on the company announcement page that "'Black lives matter' doesn't mean other lives don't. It's simply asking that the black community also achieves the justice they deserve."

He added, "We've never had rules around what people can write on our walls — we expect everybody to treat each other with respect. Regardless of the content or location, crossing out something means silencing speech, or that one person's speech is more important than another's."

Trump retaliated against Twitter last week for flagging his tweets by signing an executive order instructing the Federal Communications Commission to craft a new regulation that could exempt social media platforms from legal protections against litigation for content posted by their users.

"The threat by Donald Trump to shut down social media platforms that he finds objectionable is a dangerous overreaction by a thin-skinned president. Any such move would be blatantly unconstitutional under the First Amendment," Harvard Law professor Laurence Tribe told Salon by email after Trump had threatened to shut down Twitter, but before he issued his executive order. "That doesn't make the threat harmless, however, because the president has many ways in which he can hurt individual companies, and his threat to do so as a way of silencing dissent is likely to chill freedom of expression and will undermine constitutional democracy in the long run."

The walkout was one of several recently that occurred at major tech companies due to worker conflict with management. Amazon employees called for a walkout in April over unsafe working conditions. Just a few weeks ago, Tesla CEO Elon Musk fomented employee discontent when he violated county orders to reopen his luxury car factories in the Bay Area.