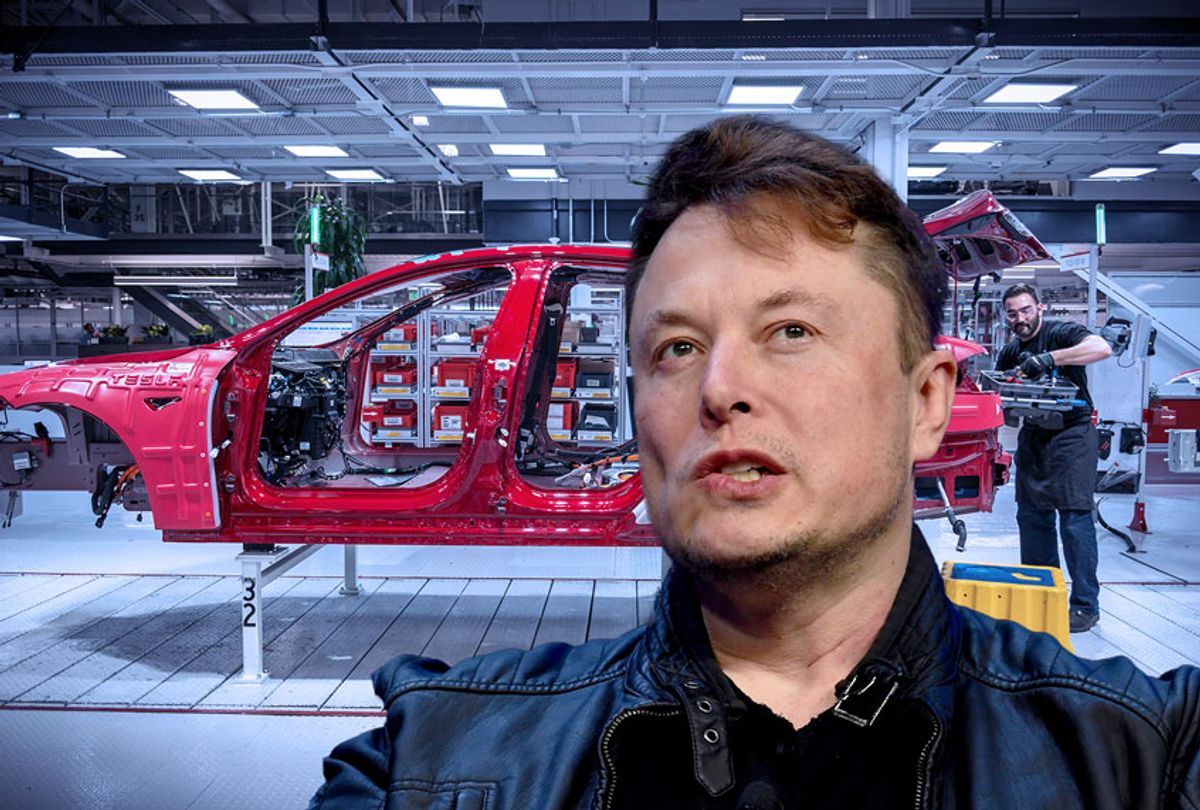 Entrepreneur Elon Musk has been locked in a pandemic-related standoff with California's seventh-most populous county. On Monday, the Tesla Motors CEO announced he was restarting production at the Alameda County Tesla factory, which employs more than 10,000 people, in direct violation of the county's shelter-in-place order. On his Twitter account, Musk said he will be "on the [assembly] line with everyone else," and stated that he was willing to be arrested for the noble "cause" of restarting production. Musk filed a lawsuit against Alameda County for injunctive relief and threatened to take his factory to another state, then took a jab at the Alameda County's interim health officer, Dr. Erica Pan, whom Musk called "ignorant."

Then, President Trump announced he was on Musk's side. "California should let Tesla & @elonmusk open the plant, NOW. It can be done Fast & Safely," Trump tweeted.

The solidarity between Trump and Musk might seem slightly odd. A consummate far-right, anti-science, anti-environment politician, Trump is skeptical of eco-friendly ventures, as Tesla — which makes electric cars — brands itself. (There have been conflicting reports raising questions if electric vehicles are greener than gas-powered cars right now.) Likewise, Trump's administrative decisions suggest he doesn't give a damn about the environment, and has expressed disbelief in climate change. Tesla brands itself as eco-conscious, although their expensive cars have become a status symbol for environmentally-conscious millionaires, and the factory workers are infamously exploited by Tesla. Trump is a Republican. Musk is an independent, who has donated to both Democrats and Republican parties, but is often associated with socially-progressive Silicon Valley.

Yet there is one big similarity between the two that unite them: their wealth. And here in America, wealth equals power and political solidarity.

Wealth, of course, is hard to accumulate without workers to make the money for you. And as fellow wealthy guys, both Trump and Musk have historically relied on an exploited underclass — as Tesla factory workers are — to make money for them.

In that sense, Trump and Musk get each other: they're both entitled, wealthy men who profit off the backs of a vast underclass; hence, both cling to their wealth and power and lash out at any material threats to that.

Musk's attempt to portray himself — a literal multi-billionaire — as a victim is reminiscent of Brett Kavanaugh's defense during the Supreme Court confirmation hearings while facing sexual assault allegations. It's comparable to Trump painting himself as a victim in the "witch hunt" de jour. It's the inability to accept no; the refusal to accept that you're not always entitled to something and that your wealth doesn't mean you're above the law. Capitalist culture enables and ennobles this type of behavior.

This is all to say that Alameda County's response to Musk has been a bit disappointing.

The mayor of Fremont, Lily Mei, issued a statement after Musk tweeted over the weekend expressing concern about the local economy. "We know many essential businesses have proven they can successfully operate using strict safety and social distancing practices," Mei said. "I strongly believe these same practices could be possible for other manufacturing businesses, especially those that are so critical to our employment base."

On Monday, Alameda County issued a statement that it had notified Tesla that it was violating current health orders by going beyond the minimum basic operations necessary for the factory to resume operations safely.

"We are addressing this matter using the same phased approach we use for other businesses which have violated the order in the past, and we hope that Tesla will likewise comply without further enforcement measures," the statement said.

According to local public radio affiliate KQED, Alameda County Sheriff spokesman Sgt. Ray Kelly said it is the responsibility of the Fremont Police Department to enforce its health order. The consequence for businesses violating the health orders include fines of $1,000 per day, or up to 90 days in jail. While business owners in the Bay Area have received verbal warnings for defying orders, there haven't been any reports of anyone getting fined or jailed for violating that have been reported by local media.

But even if law enforcement were to make an example out of Musk, it would be smaller than a small slap on the wrist. The billionaire can easily afford a $1,000-a-day fine, and given his wealth and access to lawyers, is unlikely to go to jail.

I've reported on how small businesses are struggling during this pandemic, and when I saw Musk's tweets, I thought of the thousands of small businesses who don't have the privilege of defying the law — like the San Francisco restaurateur who emptied her 401(k) and life insurance to keep her business afloat while waiting for the Paycheck Protection Program to come to her rescue. I thought of the small Asian businesses around the country who are suffering due to a newfound xenophobia among Americans. Unlike many of these small businesses, if Musk wanted to close shop today, it's not like he'd struggle to put food on the table for his family in ten, twenty, or a hundred years.

Much ink has been spilled considering how the post-coronavirus world might be different from pre-pandemic existence. Plexiglass barriers may become a permanent feature of hotels and grocery stores. Office layouts may shift to being more open, instead of crammed desks in assembly lines. Perhaps there will be more robots to substitute human interaction. Who knows. But what seems clear is that billionaires will still think they're above the law.