Amazon is not an ally: The corporation says it stands in solidarity. Its actions say otherwise 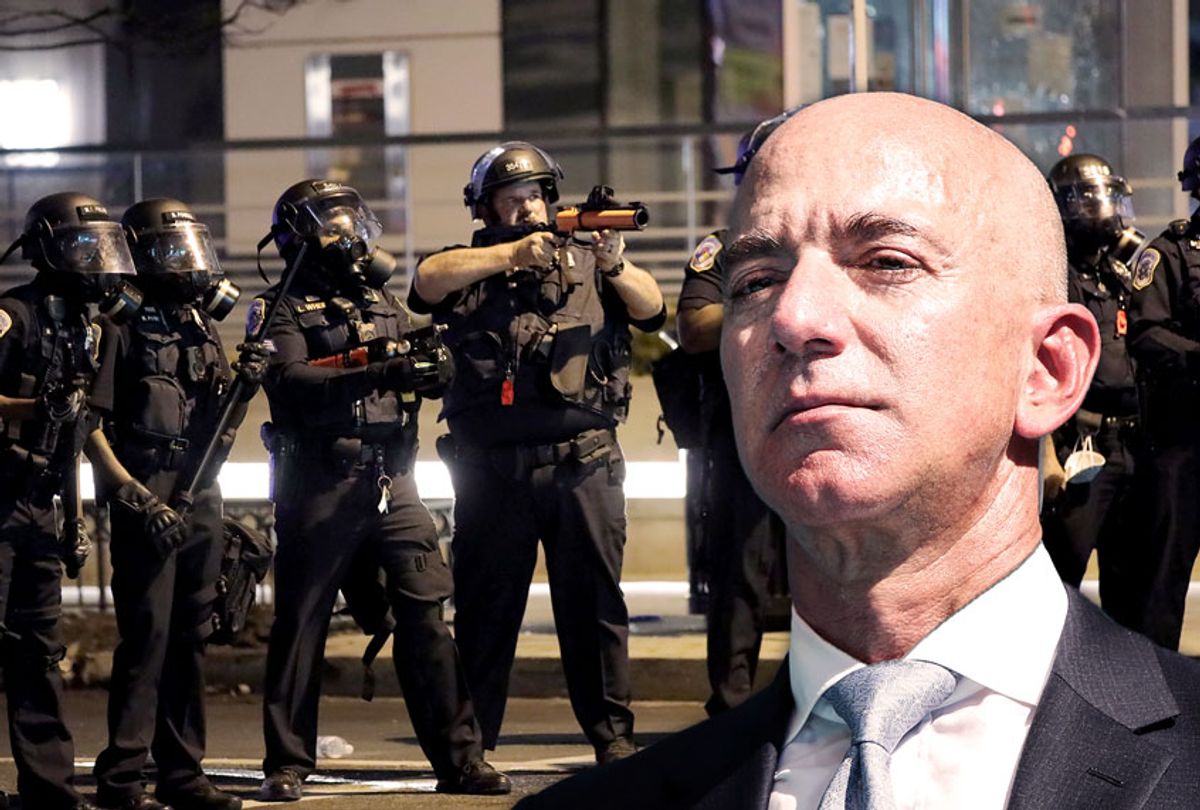 On Sunday the American Civil Liberties Union (ACLU) called out Amazon for hypocrisy after Amazon posted a corporate show of support.

Specifically, Amazon tweeted that "the inequitable and brutal treatment of Black people in our country must stop. Together we stand in solidarity with the Black community — our employees, customers, and partners — in the fight against systemic racism and injustice."

The tweet referenced Rekognition, the name of a brand of popular facial recognition software that Amazon sells to law enforcement. Studies on the software have revealed that it has bias programmed into it: As Salon's Nicole Karlis reported, Rekognition "had trouble discerning gender and skin tone when the individual was a woman, or had darker colored skin. Specifically, in the tests, Rekognition misidentified women for men 19 percent of the time, and darker-skinned women for men 31 percent of the time."

That raises the question: how much "solidarity" can Amazon really have in this case, given the extent to which they have helped contribute to racist police violence in this country?

The ACLU's reply was on point, surely but there is more at stake here than that. If we are going to learn meaningful long-term lessons from the horrific George Floyd tragedy, we must start by dismantling all of the systems of oppression that hold down racial minorities. We must walk the walk as well as talk the talk, practice what we preach, however you choose to phrase it.

By this standard, Amazon is an epic failure.

This is the same company that fired Christian Smalls, an African American warehouse worker who protested health conditions at the Staten Island facility. After he was terminated, the company planned on smearing him by making him "the face of the entire union/organizing movement" and depicting him as "not smart, or articulate," language that anyone with a passing familiarity with racial dogwhistles will immediately recognize as bigoted. (Indeed, Amazon seems fearful that its over-exploited warehouse workers will unionize, and has illustrated that they are willing to go to any length to stop them from doing that.)

(Update: Amazon has continually insisted, including in an email to Salon, that they terminated Smalls for "putting the health and safety of others at risk," although Smalls was organizing workers precisely to protect the health and safety of his colleagues. Notably, it is standard practice for corporations to deny that they are firing organizers for organizing, as it violates labor law to fire someone for doing so.)

The corporation has also made deals with more than 400 police departments in which law enforcement officials can access a portal that allows them to ask owners of their doorbells and cameras to provide footage — essentially turning citizens' own private cameras into part of a larger law enforcement panopticon.

Likewise, the demographics of the company's C-suite don't look good. None of Amazon's top executives are African Americans and only one member of its Board of Directors, COO Rosalind Brewer, is black. Two advocacy groups, Partnership for Working Families and Action Center on Race and the Economy, compiled a study in 2018 in which they found that Amazon Marketplace has allowed groups with racist, anti-Semitic, anti-LGBTQ and anti-Islamic messages to sell their products. These include a book by American Nazi Party founder George Lincoln Rockwell, a hangman's noose decal, a costume of a lynching victim, children's toys featuring the alt right symbol Pepe the Frog, and Nazi memorabilia.

And these are just Amazon controversies involving profiting off of hate. We've barely scratched the surface of its labor issues, including reports about how Amazon is failing to adequately protect its workers during the coronavirus pandemic, or how it has long been notorious for mistreating its work force in general. The notion that Amazon is in any position to take a moral high ground on any issue, ever, is ludicrous.

And yet they are brazen enough to try, which raises the question: Why?

If you understand anything about the world of corporate public relations, it's a safe bet that Amazon's business leaders met, weighed the financial pros and cons of either taking an anti-racism stand or saying nothing, and decided that wearing the costume of empathy was better for their bottom line. Certainly other companies have made similar choices, from CBS and Netflix to Nike, Disney and Bratz. While it would be unrealistically cynical to assume that no one at the top levels of these organizations is sincere, it would be unforgivably naive to simply digest their soothing words as social consciousness and then move on.

When you do that, you create an environment in which people like the unapologetically avaricious, plutocratic and exploitative Jeff Bezos can be depicted on "Saturday Night Live" as a hero because he happens to dislike President Donald Trump.

What we need, instead of hollow words, are substantive actions. The institutions that have power — public and private, from elected officials and law enforcement officers to business leaders and their millions of employees — need to think about how their deeds, on a day to day basis, improve or worsen the conditions of the marginalized.

In Amazon's case, they should start by taking up the ACLU's challenge and stop selling face recognition surveillance technology. Perhaps they should not work with police departments in any way, shape or form unless they can be assured that their software won't be used to oppress people. They should treat all of their employees better — regardless of their race — by paying them a livable wage and providing them with the basic protections they need to be safe during this pandemic, regardless of the cost. They should devote the resources necessary to root out all bigoted content on their site and then ban it, without exception.

For the rest of us, we need to realize that racist structures exist because we all participate in them, and that to be dismantled we must all be cognizant of how we contribute to them. Police officers should always wear body cameras because they have so much power that they need to be held accountable for how they use it. Businesses need to make sure that the people at the top reflect the demographic composition of America as a whole — because if they don't have minority voices present to make policies, they are more likely to make mistakes that hurt individuals from minority backgrounds. Individuals who are prone to racist reactions toward their fellow human beings — the Barbecue Beckys, Apartment Pattys and Central Park Karens of the world — need to accept that the discomfort they feel around non-whites is wrong and should react to that discomfort by checking their privilege rather than calling the cops, or otherwise making their malfunction into someone else's problem.

We all have work to do, and none of us are innocent. There are many people with moral authority we can turn to at this time, from Colin Kaepernick and Color of Change to the thousands upon thousands of protesters who are speaking for righteous causes right now. You can find your hope with these people or with different ones altogether. But it would be very, very unwise to find any hope or inspiration in the words of a company that has a human rights record as shoddy as Amazon.