Everything else about him — as a president, as a human being — is a total disaster. But the hair is amazing 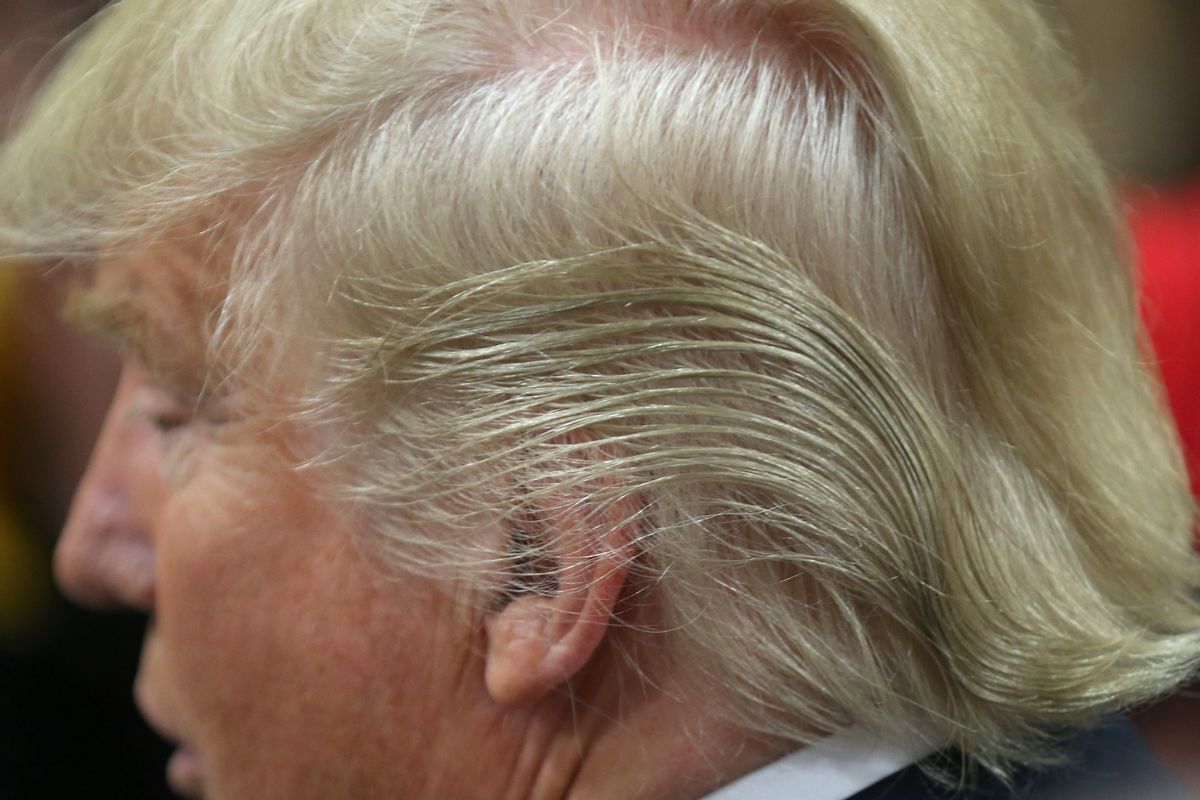 That hair is the star of the Trump show. Other than the ubiquitous billowing blue suit, Trump's hair is the most consistent thing about him. I mean, look at that snowdrift atop Mount Trump: It looks like someone dumped a tequila sunrise on his head and then swooped and sprayed and blow-dried the resulting glop into a kind of double-reverse cantilever combover. You have to wonder how long it takes to construct the thing in the morning, how the hell it's actually done,  how many times a day it has to be re-sprayed and tediously teased into shape, with its gleaming duck-tails and prideful collar-brushing flip in the back. An elaborate confection of ego and insecurity and hormonal loss and want and need — you almost have to conclude it's the thing he really cares about.

Certainly he pays more attention to his hair than he does to his family. His wife Melania? He hauls her out for photo-ops, but have you ever seen him look happy about it? Like he loves her, or even cares about her a little? Please.

Barron Trump, his youngest child, the only progeny of his marriage to Melania? Has the president even talked to him since taking office? If so, I haven't seen it. I don't think he's ever been caught looking at him, at least not in public.

The rest of them — Doofus Eric and Barbie Ivanka and Sniffles Don Jr. and Invisible Tiffany — seem less like sons and daughters than moons, spinning in orbit around Planet Donald, illuminated by his magnificence, visible only because they reflect light from him. He doesn't care about them. He displays them.

How about Trump's vaunted "base?" We learned this week how much he cares about them, when he was revealed by a former aide to have said at a meeting of his own coronavirus task force, "Maybe this COVID thing is a good thing. I don't like shaking hands with people. I don't have to shake hands with these disgusting people."

Does Trump really care about veterans? About the soldiers, sailors, Marines, airmen and women who have fought and died for their country, many of them on his watch as president, under his leadership as commander in chief? "Losers." and "suckers," according to a report by Jeffrey Goldberg in The Atlantic. "His" generals? "A bunch of pussies" and "stupid" for their defense of NATO and alliances with foreign allies, according to Bob Woodward's new book, "Rage." He called the entire military leadership of the Pentagon "a bunch of dopes" and 'losers," according to "A Very Stable Genius: Donald J. Trump's Testing of America," the book published earlier this year by Washington Post reporters, Carol Leonnig and Philip Rucker.

Trump went to Paris in 2018 to commemorate the centennial anniversary of the end of World War I, in which more than 115,000 Americans died. But he couldn't take the good time out of his day to spend 30 minutes attending a ceremony at the Aisne-Marne American Cemetery located near Belleau Wood. Instead, he was reported to have spent the day inside at the U.S. ambassador's residence in Paris, watching Fox News. But you and I know the real reason Trump didn't go to the cemetery that day. It wasn't because the cemetery was full of "losers" and "suckers" he had no respect for. It was because it was raining, raining hard. The White House tried to make it about how Trump's helicopter couldn't fly because the weather was so bad. But his helicopter didn't keep him inside that day. His hair did. Trump's hair can live with being ruffled by a slight breeze. It can even endure occasional gusts of wind. But the Trump coif can't survive getting plastered by heavy rain.

That's what it comes down to, isn't it? What Trump really cares about. Trump had to know that if he skipped the ceremony at the World War I cemetery, he would take a hit in the media. Everybody else went. He didn't. But he didn't care what they'd say about him. He cared about his hair.

We got another reminder this week about what Trump cares about as we approach the 200,000 mark in American deaths from COVID. Trump has been out there defending his response to the pandemic. "I think we did a very good job," Trump told a questioner during the ABC town hall event held last Tuesday night at the National Constitution Center in Philadelphia. That was the famous appearance where Trump claimed we are "rounding the corner" in the fight against the coronavirus. "The virus is going to disappear," he told host George Stephanopoulos. "You'll develop, you'll develop herd, like a herd mentality," he claimed. "It's going to be, it's going to be herd-developed, and that's going to happen. That will all happen."

News broke this week that Michael Caputo, the top spokesman for the Department of Health and Human Services, would take at least a 60-day leave of absence to recover from "mental health issues" after his unhinged rant on Facebook Live last weekend. Then memos from the Centers for Disease Control to the states of Nebraska, South Dakota and North Dakota, all of which are experiencing steep increases in COVID cases, were leaked, revealing that the states were being counseled to drop state and local requirements for the wearing of masks. Those three states, and perhaps others, are being encouraged not to try to control the spread of the virus, but just to let it go.

"Herd mentality," as Trump put it, is for real. Faced with the deaths of 200,000 Americans on his watch, Trump is doubling down. He has stopped holding outdoor rallies and is now holding them indoors, with no mask requirements and no social distancing. States in the Midwest with high rates of COVID infections are opening bars, holding in-person classes in all grades of school, getting ready to play college football. Trump is cool with all of it.

He won't be attending the football games. At his rallies, his crowds are kept back from the stage at a distance that is safe for Trump — but not for them, as they crowd together, trying to get closer to the man who's telling them it's OK if they get sick, because the virus that is infecting their children, their brothers and sisters, their parents, their co-workers and their neighbors — the virus that's killing them at a rate of nearly 1,000 Americans a day, day after day, week after week — is going to "just go away, you'll see."

I know you're probably avoiding watching the news at this point, and if you are, you're not seeing coverage of Trump's rallies or his White House "press conferences" that are actually events meant to show the base he's still "owning the libs." But if you happen to accidentally catch sight of him coming down the ramp from Air Force One, or taking the stage at one of his super-spreader get-togethers out there in the hinterland, check him out. Somebody standing on the tarmac around his plane, or jammed cheek-to-jowl with other MAGA hat wearers, is going to get sick and die between now and Nov. 3.

Donald Trump doesn't care about them, but the man they came to see will have perfect hair, a swoop of blondish-pinkish-goldish-whiteish cotton candy on his head that never varies, because Donald Trump wants it that way. His hair is the one thing in his life he really cares about, other than cheating at golf and stealing other people's money and putting his hands all over women who are not his wife.