From digital filters to plastic surgery, "Zoom vanity" has a long history 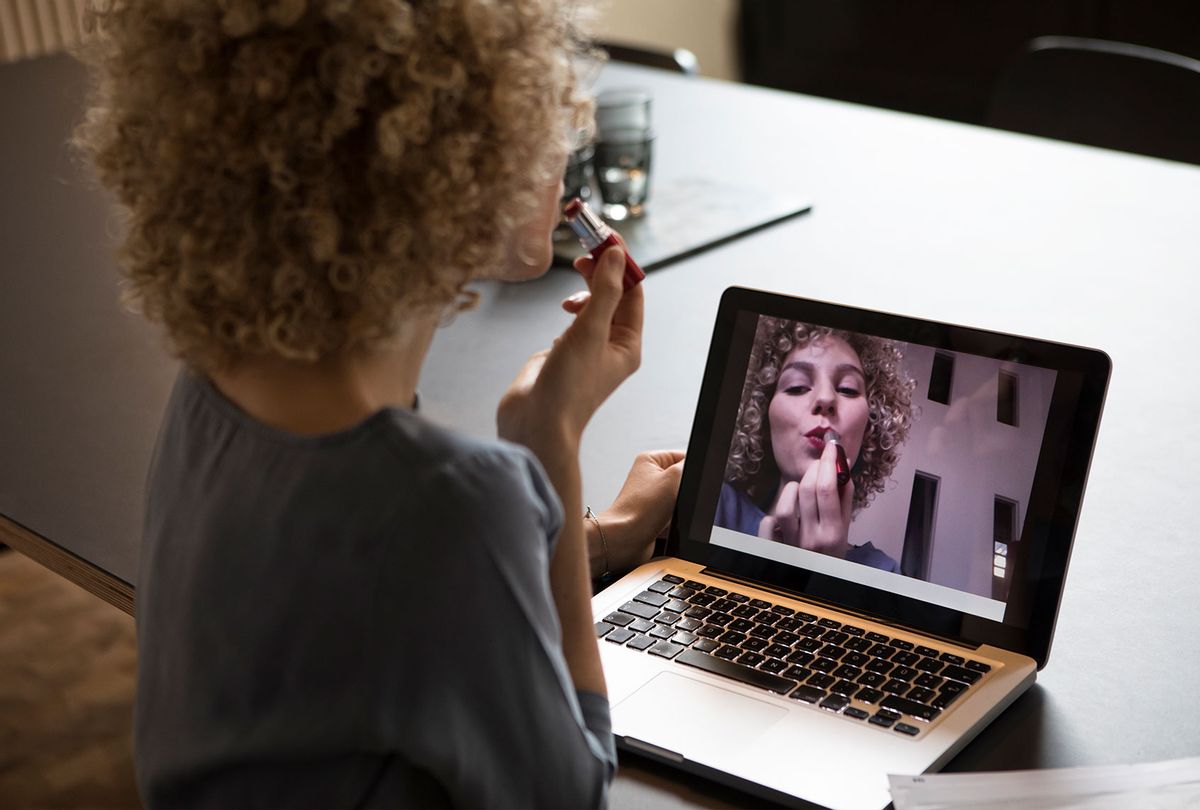 "Don't Like What You See on Zoom? Get a Face-Lift and Join the Crowd," advised a recent New York Times headline. The Hollywood Reporter described a plastic surgery "Zoom Boom," fueled by people who don't like how they look while video-conferencing. Those not ready to go under the knife are still looking for fixes, like using Zoom's "touch up my appearance" feature or buying a ring-light for its flattering glow; placing cameras at eye level or above; sitting in front of neutral walls, or even deploying fake backgrounds. Indeed, from teenagers repainting their bedrooms to impress peers during online classes to adults getting Zoom-inspired facelifts, many of us are becoming even more obsessed with how we look on screen.

It's an odd thing, because we might suppose that in the midst of a pandemic that has so far sickened over 27 million people, we would be less likely to think about jowls, nose hairs, baggy eyes, and flattering camera angles, and instead focus on more consequential matters. But despite these existential threats, many still can't help but focus on their images.  Which raises some questions: How should we regard these new obsessions? Are they a sign of moral decline, or can they be regarded in a more positive light? And should we police them — or indulge them?

In the past, such self-absorption troubled moralists, going back at least as far as the Greek myth of Narcissus. And for centuries, Americans and Europeans learned from clergy that they should not be overly preoccupied with themselves—with appearances, belongings, or accomplishments—for this was a sign of sinful vanity. Colonial era moralists reminded their congregations that good looks were fleeting, worldly possessions and positions insubstantial, for life was short and humans were flawed. As Connecticut preacher Solomon Williams explained in a 1752 sermon titled "The Vanity of Human Life," "Our Days on Earth are as a Shadow. . . it is a vain Life. . . . We are  . . . deceived with vain, and empty Hopes of some Comfort, which we never obtain . . . ." Instead of harboring such fantasies, Williams intoned that "we should live in an humble sense of our meanness. . . ." Rather than feeling pride in appearance and possessions, humans should remember their frailties—both physical and moral.

Modern critiques of Zoom facelifts suggest we're still policing vanity much as Solomon Williams did centuries ago.  But in reality, our attitudes towards vanity have been dramatically reshaped by technologies that have emerged since Williams' time. The self-consciousness that Zoom inspires is a legacy of technologies which taught 19th and 20th century Americans new ways of looking at themselves and presenting themselves to the world.

One of these technologies was photography, which arrived in America in 1839. "Victorian selfies" (or daguerreotypes as they were called) caught on quickly because they democratized portraiture. Previously the ability to possess a likeness of oneself had been something only the wealthy enjoyed, for commissioning a painting was costly and beyond the means of most Americans. By the early 1850s, there were 2000 daguerreotype studios in America, which had produced an estimated 3 million portraits. Many of these were affordably priced, and by mid-century, a very small image cost as little as a quarter.

As photography took off, so too did the moralizing.  Some speculated photographs might cure vanity, arguing that while painters tried to enhance the looks of their wealthy subjects, cameras made no such efforts. An observer predicted, "the DAGUERREOTYPE will never do for portrait painting. Its pictures are quite too natural, to please any other than very beautiful sitters." Some who had their pictures taken agreed, sounding much like those today who don't like what they see on Zoom.

Dissatisfied with their images and without the option of modern plastic surgery or TikTok filters, many resorted to other tricks. Photography studios offered clothes to clients so they could appear more affluent. A photographer in a poor neighborhood explained, "You can come in here. . . in the dress of a tramp, and I will photograph you in the dress of a millionaire. . . ."  Others went even further to enhance customers' images.  A reporter in 1892 described a Chicago studio photographer who offered female clients a set of false feet and ankles to attach to their dresses' inner seams; his clientele seemed to long for these "small trotters" rather than the "large misshapen hoofs" that some worried they naturally possessed. (Alas, sometimes both the real and the fake feet showed in a photo, making the woman appear to have four feet.)

While daguerreotypes democratized portraiture, turning a vain practice of elites into an indulgence of the many, the advent of Kodak's Brownie camera made the practice nearly universal. Cameras became mass-marketed commodities, touted for their ability to capture joyful family moments and smiling faces. As photography spread, Americans abandoned old fears about vanity and came to believe they should document themselves and their lives in exquisite, singularly happy, detail.

The rise of cheap mirrors in the late 19th century also increased the pressure to look good. When mirrors became mass-produced and affordable (selling for as little as 50 cents), the moralists, as always, were quick to opine.  One lamented ". . . since looking glasses came in—personal vanity has been enabled to indulge itself at a more moderate cost than formerly."  One famous painting of the time titled "All Is Vanity" showed an elegant woman looking into her mirror and her skull staring back out at her.  Concerns about mirrors' moral meaning were also evident in mourning practices: bereaved families often covered mirrors or faced them to the wall when there was a death in the household. To gaze upon oneself in the midst of grief was to engage in sinful, self-indulgent vanity, to ignore the ephemeral nature of life, and to taunt the fact of one's own mortality.

Yet, despite such misgivings, many began to accept mirrors as essential tools for proper self-presentation. In 1871, a columnist defended looking glasses because they allowed people to see themselves through others' eyes. With mirrors, people no longer needed to "go into society ignorant of . . .[their] . . . defects, or unconscious of  . . .[their] . . .excellencies of appearance." Mirrors offered a gift, showing individuals where they "might improve . . . [them]selves."

These new, more positive views of vanity were also apparent in 20th and 21st century advertising and popular culture. By the 1930s, magazines contended "vanity is sanity"; studying oneself in a mirror to improve one's appearance was a sign of consideration for others. By the 1990s, not caring about one's appearance seemed an outright deficiency. Seinfeld, for instance, mocked George Costanza for wearing sweatpants because it signaled: "I give up. I can't compete in normal society . . .  I'm miserable so I might as well be comfortable."

And, now, in the wake of COVID, others have chimed in as well. Psychologist Victoria Diller, who has studied body image and self-esteem, observed, there's "no harm" in enhancing our Zoom appearances. "It's really no different than the pleasure we get from wearing makeup, styling our hair or donning a new outfit when we were all going about our lives before COVID-19." After all, "Looking good makes us feel good."

All this suggests that while we still police vanity, we've come a long way from Solomon Williams' time. We no longer frame vanity in his stark terms.  A decline in self-censure has occurred, at least partly as a result of the advent of new technologies like photographs, mirrors, and Zoom.  Given our current circumstances, we might profit if we turned off our Zoom video-feeds on serious occasions, in much the same way our ancestors tried to allay vanity by covering mirrors during funereal times.  At the same time, our new norms can't be parsed simply as good or bad, virtuous or evil, selfless or selfish.  Over-regard for the self, as happens when we stare too long at our own faces in Zoom at the cost of looking at others, is still something to worry about.  But a modicum of self-regard, and regard for how one appears to others, is not.

Luke Fernandez and Susan Matt are authors of "Bored, Lonely, Angry, Stupid: Changing Feelings About Technology From The Telegraph to Twitter" and are faculty at Weber State University. Luke Fernandez is Asst. Prof. in the School of Computing at Weber State University. He holds a Ph.D. in Political Theory from Cornell University. He also is a software developer. His writing has appeared in a range of publications, including the Washington Post, Slate, Lapham's Quarterly, and the Chronicle of Higher Education.

Luke Fernandez and Susan Matt are authors of "Bored, Lonely, Angry, Stupid: Changing Feelings About Technology From The Telegraph to Twitter" and are faculty at Weber State University. Susan J. Matt is an historian of the emotions and Professor of History at Weber State. She is author of "Homesickness: An American History" (Oxford University Press, 2011), and Keeping Up with the Joneses: Envy in American Consumer Society, 1890-1930 (University of Pennsylvania Press, 2003). Her writing has appeared in the New York Times, the Wall Street Journal, and the Journal of American History, among other places.