Progressives call for Senate showdown, Supreme Court reform: "We can, and must, fight"

In the wake of Ginsburg's death, an epic battle looms for "our rights, our freedoms, ... our bodies, our lives" 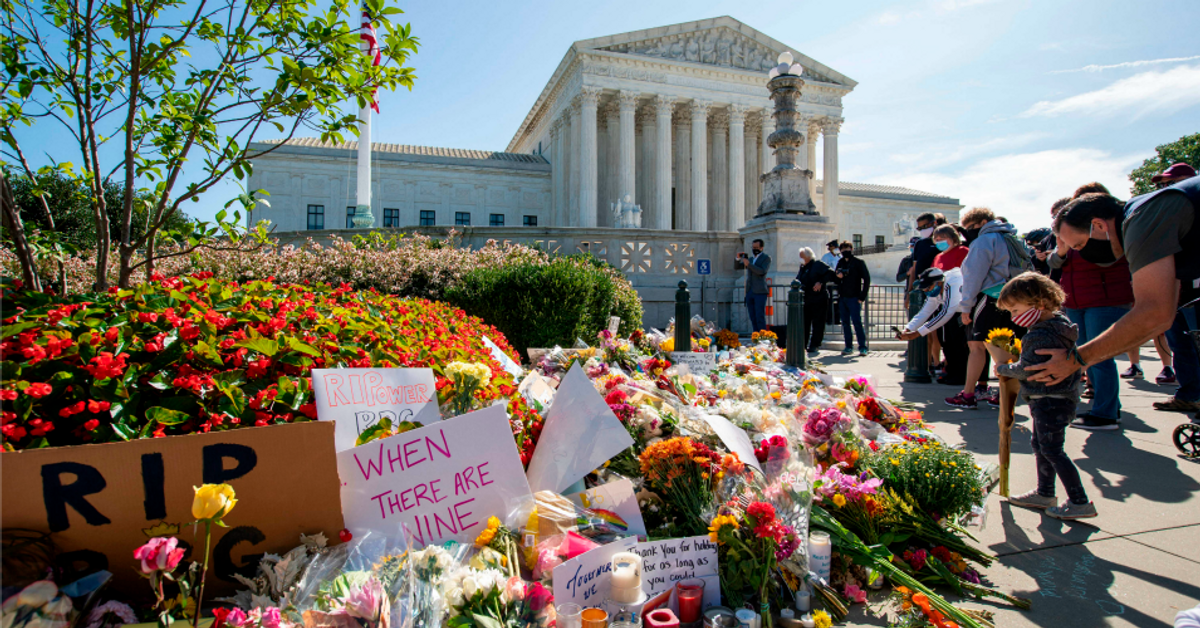 People place flowers outside the U.S. Supreme Court in memory of Justice Ruth Bader Ginsburg. Ginsburg died on Sept. 18, opening a crucial vacancy on the high court, setting off a pitched political battle at the peak of the presidential campaign (Jose Luis Magana/AFP via Getty Images)
--

As mourners left flowers and signs outside the U.S. Supreme Court building through Friday night and into Saturday following the death of Justice Ruth Bader Ginsburg, President Trump and Senate Majority Leader Mitch McConnell vowed to force through her replacement with just weeks until the November election while progressive  Ginsburg's dying wish that she "will not be replaced until a new president is installed," Rep. Alexandria Ocasio-Cortez, lawmakers and organizers promised to fight the GOP's hypocritical effort to shift the court right.

Citing Ginsburg's dying wish that she would "not be replaced until a new president is installed," Rep. Alexandria Ocasio-Cortez, D-N.Y., declared that "we can, and must, fight." That fight to "preserve our democracy and move forward," the congresswoman said, "will require each and every one of us, from the streets to the Senate, to grow in courage, strength, and strategy."

McConnell — who in 2016 led Republicans' months-long blockade of Merrick Garland, President Barack Obama's nominee to the high court, citing the upcoming presidential election — said on Friday, with less than two months until the next election, that the Senate will vote on Trump's nominee. The president took to Twitter Saturday to urge the GOP-controlled upper chamber to approve his unannounced pick "without delay."

The majority leader and president's position — though widely expected, particularly given their ongoing joint effort to remake the federal judiciary by ramming through right-wing lifelong appointees — provoked pushback from top Democrats, including the party's presidential nominee, Joe Biden. The former vice president said that "voters should pick the president and the president should pick the justice to consider."

While noting Ginsburg's legacy as a trailblazing advocate for equality and justice, Biden and congressional Democrats called on elected Republicans to follow their own made-up rules. Referencing the majority leader's 2016 remarks about Garland and giving "the people a voice," Sen. Bernie Sanders, I-Vt., said in a statement Saturday that now, "McConnell is cementing a shameful legacy of brazen hypocrisy."

Sanders added that "thankfully not all Senate Republicans agree" with plowing ahead to confirm a Trump appointee, noting that Sen. Lisa Murkowski, R-Alaska, has said that she is against an appointment this close to an election and "would not vote to confirm a Supreme Court nominee." Since then, Sen. Susan Collins, R-Maine — who faces a difficult re-election battle this fall and trails her Democratic opponent in the polls — has announced a similar position.

Four Senate Republicans would have to join with all Democrats to block Trump from appointing a third justice to the court — following Neil Gorsuch in 2017 and Brett Kavanaugh in 2018. The arithmetic for a potential confirmation vote now appears balanced on a knife's edge. Although Sen. Mitt Romney, R-Utah, the most consistent Trump critic among Senate Republicans, has not taken a public position on filling Ginsburg's seat, former Utah politician Jim Dabakis tweeted on Friday: "A high-level Romney insider tells me Mitt Romney has committed to not confirming a Supreme Court nominee until after Inauguration Day 2021."

If those three senators commit to voting no, McConnell would have to hold all 50 other Republicans together to confirm a potential Trump nominee — with Vice President Mike Pence potentially casting the deciding vote in a 50-50 tie.

As Sanders pointed out, other GOP senators have previously stated that they would be opposed to a confirmation vote this close to an election — specifically, Sen. Chuck Grassley of Iowa and Sen. Lindsey Graham of South Carolina, who chairs the Judiciary Committee and would preside over hearings for a potential nominee. According to Sanders, "The right thing to do here is clear. The Republicans in the Senate know it, and many of them have stated it clearer than I could. We should let voters decide. Period."

Graham, who currently faces a surprisingly tight re-election battle against Democrat Jaime Harrison, said in October 2018 that "if an opening comes in the last year of President Trump's term, and the primary process has started, we'll wait to the next election." But although Graham was once a Trump critic, he has since become one of the president's most obsequious followers, and appeared to shift his position on Saturday:

David Sirota, senior adviser and speechwriter to Sanders' 2020 presidential campaign, suggested a strategy in his newsletter on Saturday: immediately announcing a progressive primary challenge to Senate Minority Leader Chuck Schumer, D-N.Y., who will be up for re-election in 2022. Although Schumer on Friday stated his opposition to confirming a new justice, quoting McConnell's comments from 2016, Sirota noted the minority leader's record on fast-tracking Trump judges.

"That means Schumer needs to face maximum pressure every single day to use all possible power that his caucus has — and it has power — to stop a Trump appointment," Sirota argued. He explained that "the Senate runs on the unanimous consent system — which basically means that to do its most basic business, all senators must consent. In this situation, Senate Democrats have the power to use that system to grind everything to a halt."

Progressive organizers and political commentators also raised alarm about Trump's latest list of potential nominees — warning, as Bill Blum wrote for The Progressive, that "if Donald Trump gets to appoint a single additional justice to the court, our children and our grandchildren will be paying an epic price for decades to come."

Planned Parenthood president Alexis McGill Johnson said in a statement that "the fate of our rights, our freedoms, our healthcare, our bodies, our lives, and our country depend on what happens over the coming months."

After mentioning Ginsburg's record on reproductive rights as well as Republican efforts to appoint justices who support overturning Roe v. Wade and cutting off access to abortion, Johnson added that "it would be an absolute slap in the face to the millions of Americans who honor and cherish Justice Ginsburg's legacy if President Trump and Mitch McConnell were to replace her with someone who would undo her life's work and take away the rights and freedoms for which she fought so hard."

Biden's running mate, Sen. Kamala Harris, D-Calif., responded to Ginsburg's death by underscoring the importance of voting in the general election. In a Saturday email to supporters, Harris wrote that she and Biden "know, like you do, that the most important thing we can do to protect that legacy is not just winning the White House, but electing a Senate majority that will confirm fair-minded Supreme Court appointees who believe in equal justice under the law."

As Common Dreams reported Friday, given concerns about the coronavirus pandemic and Republican efforts to limit election participation, progressive advocacy groups including Stand Up America are encouraging Americans to "vote as early as possible, whether they do that by mail or in person."

Vanita Gupta, president and CEO of the Leadership Conference on Civil and Human Rights, voiced her opposition to the Senate confirming a Trump appointee in a statement Friday night and suggested on MSNBC that the justice's death could energize voters:

Ginsburg's death and the political battle it sparked have also renewed calls for expanding the Supreme Court by at least two seats — which could be accomplished by congressional legislation, since the size of the court is not dictated by the Constitution. Elie Mystal, The Nation's justice correspondent, wrote that "should Democrats ever hold that power again, they must act. The addition of two justices is simply a proportional response necessary to right the wrongs committed by McConnell. The addition of 10 justices, as I have advocated, puts the Supreme Court on a path toward long-term reform."

"This must be our fight now. We must do everything we can to stop McConnell from filling Ginsburg's seat and, however that turns out, we must retake political power and reform a Supreme Court that has been irrevocably broken by McConnell's ongoing hypocrisy," Mystal continued. "That fight seems daunting, but it is no more difficult than the battles Ginsburg herself fought and won over the course of her storied career."

University of Michigan professor Juan Cole concurred, writing that "if the Democrats win both the presidency and the Senate, they must do something about the dictatorship of the minority on the court, and they ought to come in prepared to introduce serious reform so that our laws reflect the will of our 330 million people rather than that of a few corrupt billionaires allied with hypocritical religious fundamentalists."

At least one progressive in Congress issued a similar call in the wake of Ginsburg's death. Sen. Ed Markey, D-Mass. — who recently won a contentious Democratic primary against Rep. Joe Kennedy III, D-Mass. — tweeted on Friday night that "Mitch McConnell set the precedent. No Supreme Court vacancies filled in an election year. If he violates it, when Democrats control the Senate in the next Congress, we must abolish the filibuster and expand the Supreme Court."