Progressive senator beats back challenge from the most famous name in politics — and why was Nancy Pelosi involved? 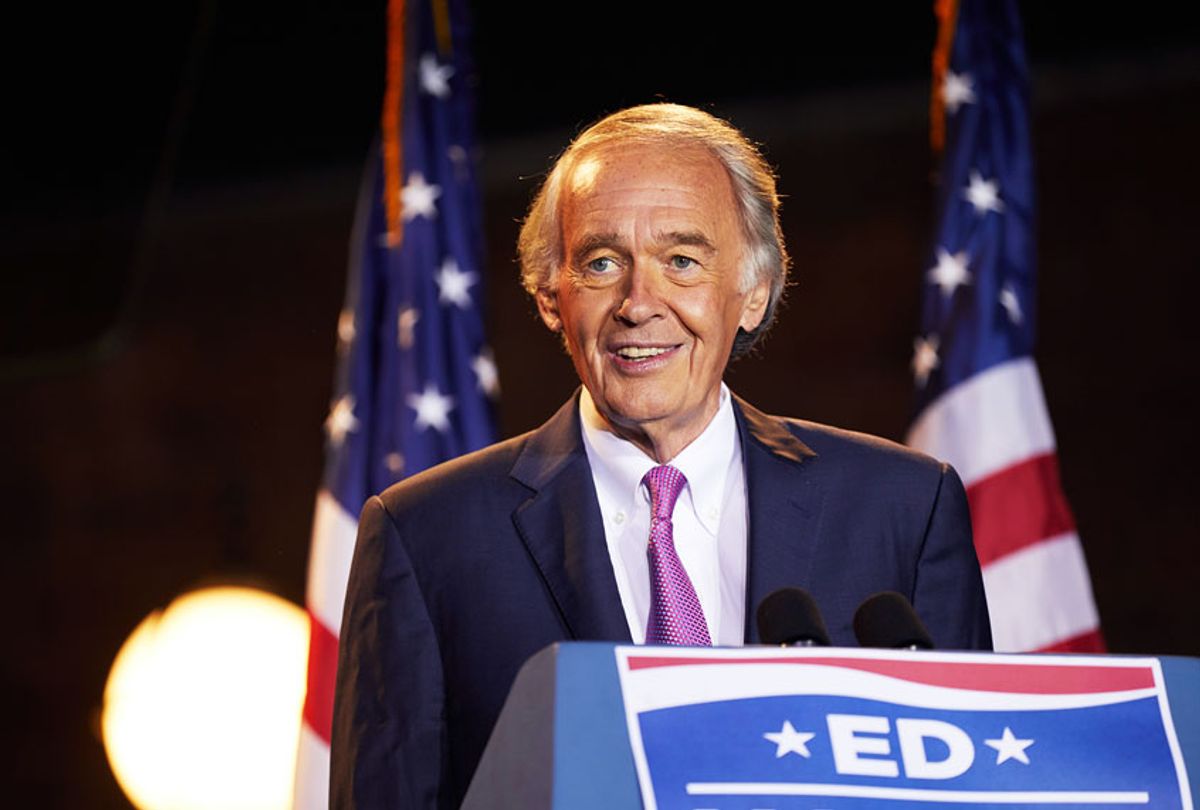 History was made on Tuesday — but it ultimately won't be for the better.

A Kennedy lost an election for the first time in Massachusetts state history. Incumbent Sen. Ed Markey won the Democratic primary with a robust victory over his challenger, Rep. Joe Kennedy, whose dynastic surname garnered him a perceived frontrunner status early on. In near-final results, Markey held a lead of 55.5% to 44.5%, and Kennedy conceded defeat shortly after midnight.

In a year when Democratic incumbents in the Democratic Party have had reason to run scared, Markey's 47-year political career didn't prove too big a liability against a 39-year-old opponent with a remarkably similar record. And that's the problem. Polls as recently as June showed Markey down by double digits against Kennedy — no doubt reflecting the latter's immediate name recognition — but Massachusetts voters felt no ill will toward the incumbent, who successfully shifted the narrative to Kennedy's perceived entitlement. So this race ended in more traditional fashion than some other elections in the recent past. Some towns in Kennedy's congressional district went for Markey by a 2-to-1 margin.

By any standard, this entire primary received outsized national attention. For all of the headlines and bitter online battles the Massachusetts Senate primary engendered, it was never likely to result in any real change. Although roughly half Markey's age, the grandson of Robert F. Kennedy (and great-nephew of John F. Kennedy) is only a slightly more moderate Democrat. Their platforms were basically indistinguishable. Despite an admitted major blunder in voting for the U.S. invasion of Iraq as a House member, Markey has become known in the Senate as a leading voice on environmental issues and co-sponsored the Green New Deal omnibus legislation along with Rep. Alexandria Ocasio-Cortez, D-N.Y., who endorsed his re-election. Kennedy, on the other hand, was bogged down by his ties to the fossil fuels industry and offered campaign ads that literally read, "I know what it takes to build a legacy." In other words, his leading qualifications was that he's a Kennedy.

Now Kennedy has lost his Senate bid and is out of Congress. House Speaker Nancy Pelosi is left holding the bag.

Kennedy could have waited for Markey to retire after this term — the senator will be 80 in 2026 — or hoped that Sen. Elizabeth Warren's seat becomes vacant if she joins a hypothetical Biden administration. He could have deployed his famous last name to challenge the Bay State's remarkably popular Republican governor, Charlie Baker, who's up for election in two years. Instead, he ran a futile vanity campaign that only served to divide an already fractured Democratic Party during a crucial presidential election year.

In Pelosi's least politically astute move in recent memory, she endorsed Kennedy despite her public ruminations on the problem of primary challenges — and did so during the Democratic convention, a week meant to unite the Democratic base. Perhaps now the speaker should explain why the Democratic Congressional Campaign Committee should continue to withhold support for primary challengers. For all the hullabaloo made out of the left's supposed unwillingness to compromise with Democrats in office, Markey stands as a notable exception — a venerable liberal with a mixed record who has been embraced by the progressive left after championing one of its major legislative priorities. Curiously, Sen. Bernie Sanders of neighboring Vermont stayed out of this race, while Warren and Senate Majority Leader Chuck Schumer both endorsed Markey. (This may be the only example of Pelosi and Schumer openly supporting opposing candidates.)

In the end, Kennedy's vanity campaign will be remembered only slightly more readily than the quixotic Senate aspirations of Caroline Kennedy (who once sought the open-seat appointment in New York that went to Kirsten Gillibrand). All the energy and money that went into this primary is now out of reach for down-ballot progressives across the country.

If nothing else, this historic defeat suggests that the old Democratic dynasties are dying out. Last year, Bill Daley ran a losing campaign for mayor of Chicago — no one with that surname had ever lost a mayoral race in the Windy City. A year later, for the first time ever, a Kennedy has lost a contested race in Massachusetts.

Meanwhile, the fight for Kennedy's vacated House seat could go to a former Republican with less than 25 percent of the vote, because multiple progressive candidates look to have split the vote. That race is still too close to call, with barely over 100 votes separating progressive Jesse Mermell from Jake Auchincloss, who was a registered Republican as recently as 2014. If the latter wins, Pelosi will struggle to explain why she didn't talk Kennedy out of his run for higher office rather than backing him.

In a vastly more consequential election, another Massachusetts incumbent prevailed on Tuesday — this time over a progressive challenger pushing marked policy differences.

House Ways and Means Committee chairman Richard Neal had less difficulty than Foreign Affairs Committee chair Eliot Engel of New York, who lost, and Oversight Committee chair Carolyn Maloney of New York, who barely survived. Neal easily beat back his young, progressive, well-funded opponent, Holyoke Mayor Alex Morse. Neal represents a mostly white and rural district; he is not an ideological outlier like defeated Illinois Rep. Dan Lipinski, one of the few anti-choice Democrats in Congress, nor is he demographically out of step with his district, as were Engel and former New York Rep. Joe Crowley (who lost to Ocasio-Cortez in 2018). Neal avoided the mistakes of incumbents before him by returning to the district often to campaign, and plastered the airwaves with ads alleging that Morse was chronically absent at school board meetings.

Morse had appeared to be mounting a real challenge according to polls and fundraising numbers throughout the summer, but was criticized for his record on police brutality as Holyoke mayor before being slammed by what appeared to be coordinated allegations of improper sexual relations with students while teaching at UMass Amherst and Amherst College.

This was the race for national progressive to pour their energy into. Perhaps no other senior House member is as dedicated to the myth of bipartisanship as Richard Neal — and ironically, he singlehandedly killed the only non-emergency major bipartisan deal of the past four years. He's the top recipient of corporate money of any member of Congress, Democrat or Republican. Should Democrats take back control of all three branches in November, they'll soon be reminded that it is difficult to pass anything substantial with a pro-corporate "moderate" holding the purse strings at Ways and Means.