Anne Helen Petersen: The antidote to burnout is regulating capitalism

The journalist talks to Salon about her new book "Can’t Even," which digs deeper into the phenomenon of burnout 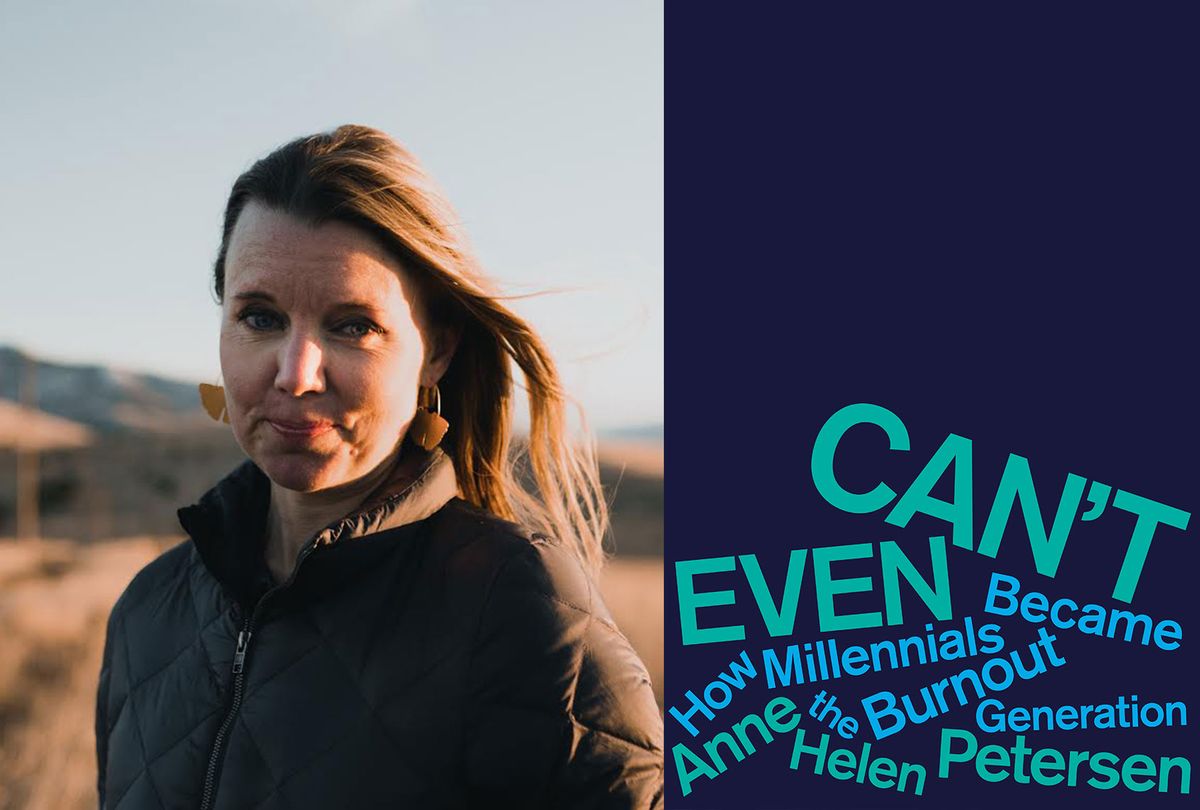 Journalist Anne Helen Petersen touched a cultural nerve when she published an article about her own experience of burnout. The 2019 BuzzFeed article, titled "How Millennials Became The Burnout Generation," gave a name to an experience so many Millennials had been feeling for a long time. Likewise, the viral piece debunked a cultural myth about Millennials being "lazy"; the stereotype, Petersen says, may come from the fact that the build-up of small stressful tasks leads to feeling overwhelmed.

Petersen's feature was the culmination of years of being overworked, underpaid, depressed, anxious, and facing an endlessly challenging future — while being bound by impossible career expectations and the performance, on social media, of a "perfect" life. Months later, the World Health Organization went on to recognize burnout as an "occupational phenomenon."

In an interview with Salon, Petersen said she had no idea the article would resonate like it did, and eventually lead to her much-anticipated book, on sale Sept. 22, "Can't Even: How Millennials Became The Burnout Generation." "The original essay was a way for me to work through my own burnout," Petersen said, sharing that the book had given her yet more insight into the root of the problem. "I can see it clearly."

Salon chatted with Peterson in a wide-ranging conversation that touches on Baby Boomer parenting techniques and the collapse of the American middle class. As always, this article has been edited and condensed for clarity and length.

Let's start with the genesis of the book. Clearly your BuzzFeed article about burnout resonated with a lot of people — especially Millennials, but not only Millennials. And I'm wondering if you can share more about the process of turning that article into the book?

I want to say, though, that I had no idea it was going to be a book when I wrote the article. The original essay was a way for me to work through my own burnout. And when it got published, I was like, "okay, hopefully some people read this and it resonates with them," and that would be lovely. But I did not expect it to do what it did.

About a week afterwards, a colleague of mine said something on Twitter about it becoming a book. And I was like, "that would be interesting," because I had been working on a different book proposal while I was burnt out, and it was just so forced and not very good. And I was like, "why don't I do this?"

So from that I realized I could go deeper and wider in terms of context and experience, and turn an academic lens on it. I'm trained as an academic historian in media studies. So when I think about a phenomenon, a concept, there's what I can do for an article and then there's a completely different set of research that I do when it's going to be a book. I started by making a giant reading list, seriously like a hundred books. And then started thinking about economic history, parenting history, and history of the discourse of passion around work. There's so many things that I could go deep on, and it was really gratifying to be able to poke around in all of those different corners.

Do you feel like you have more answers now after your investigation?

I think I can see it clearly. I think that, before with my article, I was like, "I'm burnt out." And this is something that is very common to our generation.

For example, there was a period of stability for a lot of Americans, middle-class stability, where  a lot of people who were not middle class were added to the middle class, and that has gradually deteriorated over the course of Millennials' lifetimes. I wondered, how can we think about reinstating some of that security? And preventing the precariousness that I think is really at the root of burnout?

And then just other things too, like the history of parenting surveillance and ideas about parenting, and what good parenting looks like. All of that was so revelatory for me in terms of thinking about my own parents, how I grew up and how, in some ways, I had some of the components of what in the book is called conservative cultivation. But I also had the total freedom and lack of supervision that accompanies more childhoods in rural areas. I grew up in a small town in Idaho, there just wasn't as much conservative cultivation available as someone who is growing up in, say, New York City or Seattle or something like that.

What do you think of how Baby Boomers parented their Millennial kids?

I think that that kind of laser focus on the path to success made it easier to ignore how some of the other choices that parents were making — say, in their voting decisions and then the legislators that they elected. How would that have ramifications on things like, if you vote for legislators who defund public education and who institute right to work laws? How is that going to have effects on your kids when they enter college, in terms of how much debt they're going to have to accumulate? But also, what are the labor conditions going to be for them when they get out of college? I think it's hard to draw that line.

And then there's just stuff that can seem like really good parenting because it's preparing kids for college but that really was fashioning kids into mini-adults very early, and sucking the joy out of a lot of stuff. The thing that always sticks out to me from my research is standardization of play. How you used to go "play" at someone's house, and now you have a "playdate," something that is formalized and now has cultural capital, that has start times and end times, and oftentimes is supervised. It's such a great metaphor for just how play has changed over the course of our lives.

That really stuck out to me in your book, how Millennials kids were managed as mini-adults — how we were encouraged to stay busy and have all these activities after school. In our adult life, the consequence is that many Millennials don't know what to do with their free time, which causes anxiety and stress. But it seems like there is a disconnect between what we were told being an adult was versus what adult life is actually like.

Especially, I think, in young adulthood. And you see it most vividly in the way that there's still this Boomer mentality that Millennials don't work or are lazy, which is so fascinating to me. I say this in the book, but every Millennial I know is just hustling as hard as they can with what they're doing. But I think a lot of it has to do with the fact that some of the forms of work are not recognizable as work to older generations.

So, something like — depending on your job — some component of it might be managing the Instagram account. And that just [doesn't look like a job] to someone else, like, you're just on social media. Whereas it's actually a very difficult job that requires very particular skills and a lot of time. And it doesn't look or feel like work. And so, if you say, "I'm so exhausted," they're like, "what have you been doing? You haven't been in the coal mines," or something like that.

The thing that [Boomers] often bring up is, "you're not doing physical labor and so it's not hard work." That's one of the disconnects.

I'm curious what your thoughts are on this cultural obsession and fascination with Millennials in general.

I think that every generation, as they come into form, they've become an object of fascination. There was a similar obsession with Gen X when they were our age, and Boomers.

How do you think we can distance ourselves from this obsession of being productive, and having to do everything perfectly, like even our hobbies?

I don't even know. Your book definitely made me see things more clearly, but I feel like I need to go back to therapy to really think about it.

The beauty of a hobby, and I've thought about this so much and there's a chapter in the book about it, is that you don't have to be good at it because it's not for anyone but yourself. I just wrote a newsletter about how I'm just really struggling to make my garden work here in Montana. I was like, "I'm so embarrassed, I can't Instagram my garden."

But, who cares? What matters is that I have spent an inordinate amount of time just watching my vegetables grow every morning, and that gives me pleasure. Being able to go out there and just look at them. And that's a hobby. It's a feeling that is hard to recognize because you have become so alienated from it. But I think it's going to take a lot of unlearning to feel at peace with, on the weekend, not doing anything. Not packing your schedule. How to do nothing is really hard for us to learn.

And for some of us, it depends on whether or not you're a parent or you're an essential worker who has to go out and be at work all day, every day. But some of us are finding time. Some of us have been forced to hang out with ourselves, and it feels uncomfortable because it's so unfamiliar.

How do you unlearn that rhythm of always having to be productive and busy?

I do think that I am fortunate in my positioning in the Millennial spectrum, because I'm an "Elder Millennial." And so, I had some time to cultivate some hobbies before they got cannibalized by my work. Like gardening is something that I did a lot of in the immediate years after college. And I think of those times as times that I was working as a nanny, I didn't think of how to be productive in my off time, I just had time. It was just actual off time. And there was no social media yet, I had a flip phone, I couldn't take pictures of anything.

I learned to do things to just do them. So I can return to something like gardening.

I think a lot about the fine line in exercise, the line between, "am I doing this to optimize my body" or "am I doing this because I love it?" So, trying to keep myself attuned to that, and thinking, "what's a way that I can make an activity to lean into the part of actually experiencing it and liking it," instead of the, "I must do this so that I look like this" part?

What is the antidote to burnout? Having a hobby?

That's on a personal level. But the real antidote is to regulate capitalism. The thing I tell people is, there are all sorts of small things that you could do in your life. But that's a Band-aid. Burnout is not going to be solved until it can be solved for everyone. And that means societal shifts that relieve that safety net beneath us in substantial ways, and not just for certain slots of the middle class.