Beyond Trump: Despite the setbacks of 2020, progressives now have a real path to power

Was this a bad year for the left? Only in the headlines — at ground level, progressives have made major gains 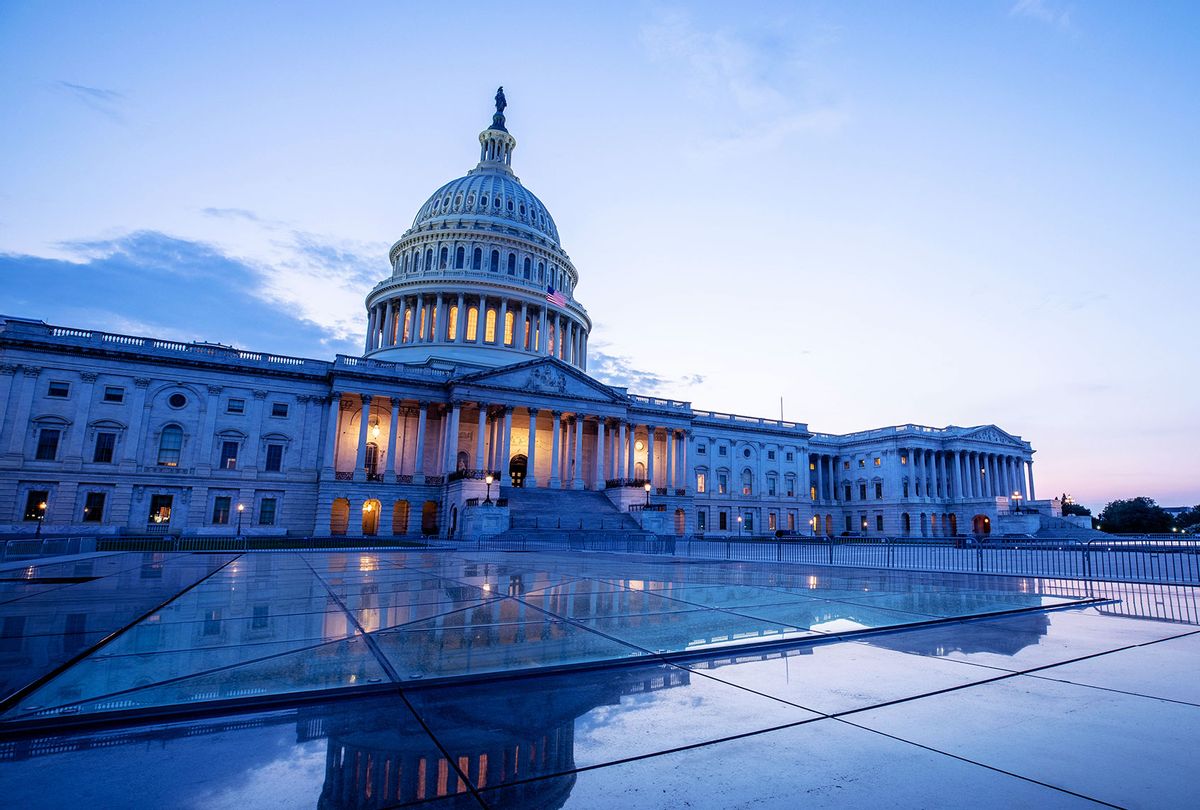 At first blush, the 2020 Democratic primary campaign was a blow to progressives. Two leading candidates on the left — Sens. Elizabeth Warren and Bernie Sanders — both ran for president this year, along with a number of others who had worked to establish progressive credibility (including Sen. Kirsten Gillibrand, former HUD Secretary Julián Castro, Gov. Jay Inslee of Washington, Sen. Cory Booker and Sen. Kamala Harris, the eventual vice-presidential nominee), courting various policy positions such as Medicare for All and the Green New Deal.

In the end, of course, the nominee was Joe Biden. But politics, as Max Weber put it, is the long boring of hard boards. There has been progress for the progressive movement throughout the 2018 and 2020 election cycles that has gone largely unnoticed and undiscussed. If you step back from the day-to-day media narrative — often influenced by shortsighted allocations of political capital — progressives are winning the war even as they lose ill-chosen battles.

Analyzing politics through the lens of decades, instead of the day-to-day news deluge, tells important stories about the progressive overhaul of the Democratic Party. The $25 unemployment insurance expansion of the 2009 recovery has become a $600 expansion. The modal swing-district Democrat is no longer a "Blue Dog" who opposes abortion, gun control and deficits, but now includes members of Congress like Katie Porter, Sean Casten, Lauren Underwood and Lucy McBath, who are leaders on corporate power, clean energy, health care and gun control, respectively (to name just four of an outstanding new class of House Democrats). The Democratic Party is not where progressives may wish, but it is not where it was at the beginning of Barack Obama's presidency.

It has become possible to imagine a progressive Democratic Party. A new report from Way to Win and Data for Progress outlines what the future holds for progressives. Our optimism rests on three key realities.

The first and most important development is the historically unprecedented liberalism of the millennial and zoomer generations, which are also the most diverse generations. While people often misremember the political trajectory of the bBoomer generation, Boomer whites were in fact quite conservative as youth (as contemporaneous reporting reminds us). Research by Data for Progress shows that millennials are historically liberal. If anything, since 2011, millennials have become more liberal, according to Voter Study Group panel data (which studies the same people over time). As the multiracial millennial cohort ages into higher rates of voting, they will transform progressive politics. 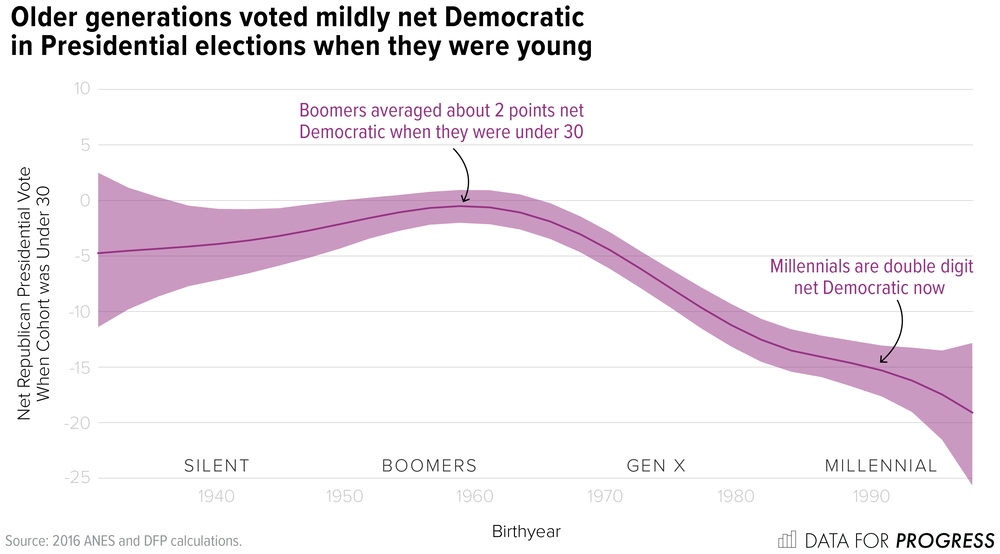 There is a lot of potential in a group of voters who are too often ignored by most campaigns and super PACs. These voters, referred to here as "high-potential voters," have some experience and history with voting, having voted at least once in the period between 2012 and 2018, but do not do so reliably enough to top lists of likely voters. They're consistent Democrats in every way, and lean more liberal and younger than average. On policy, they agree with the progressive left, but they can't be relied upon to vote without the motivating efforts of a strong GOTV campaign. Unlike the much hyped non-college white swing voter, high-potential voters are amenable to strong progressive messaging. We see a huge opportunity in this group for progressive organizations to do important electoral work and find new voters for our candidates without needing to compromise on their stances and issues.

The second reality is the emergence of progressives as a durable bloc within the Democratic Party. In 2020, powerful Democrats who could be considered part of the "establishment" supported primary challenges to incumbents like Reps. Eliot Engel of New York and Dan Lipinski of Illinois, both of whom were defeated. At the state and local level, Democratic champions like Lina Hidalgo in Harris County, Texas, and Garlin Gilchrist in Michigan are reshaping what it means to hold and wield executive power through co-governance.

This trend played out in swing states across the country as well in state and local races important for governing power. In Georgia, Fani Willis is a progressive now poised to become Fulton County's first woman DA. She unseated her former boss, a six-term incumbent, after running a powerful campaign that addressed issues of sexual harassment and corruption head-on. Akilah Bacy, a Black woman running on a progressive platform of equitable education and employment rights, won her runoff for the swing Texas House District 138. In Nevada, former Assemblyman Ozzie Fumo won a competitive primary and is the Democratic nominee for an important Supreme Court seat. He is one of the most steadfast and strongest allies on bail reform and abolishing the death penalty. Winning this seat in November would be a coup for progressives, and justice.

By working to elevate women, LGBTQ candidates and candidates of color who hold progressive values, progressives can grow their ranks across all the important levers of government, from Congress to statewide wins to state and local seats.

Finally, progressives have built a functioning infrastructure to contest intra-party contests. During his successful challenge to Engel, Jamaal Bowman raised $2.3 million, more than the $900,000 Rep. Ayanna Pressley in Massachusetts raised before the primary, which was more than the $300,000 that Rep. Alexandria Ocasio-Cortez raised before her 2018 primary. There is an emerging ecosystem of organizations working together to build more power within the Democratic Party — like Justice Democrats and Data for Progress, and values-aligned firms who ignore the DCCC blacklist, like Middle Seat and New Deal Strategies. Groups like Way to Win, Movement Voter Project and others have been investing in the state-based independent political infrastructure not only in order to recruit and train movement leaders for office, but to help them get elected in competitive primaries, as well.

How do progressives build on these victories? First, donors need to get involved where it counts: getting progressives across the finish line in primaries, as the Way to Win community and Way to Lead PAC have. They also need to have the back of those elected officials when they go out on a limb for the progressive movement, as Reps. Rashida Tlaib and Ilhan Omar have done.

Second, progressives need to be strategic. Several times during this cycle and in the past, progressives have tried to contest races that were overly ambitious in terms of movement capacity. Unlike the center, we don't have the resources to misallocate and we do face real constraints. Journalists can only cover so many races. Organizations can only engage in so many independent expenditure campaigns. These constraints need to be taken seriously. Losing is not a progressive value and the 2018 cycle created the perception that progressives were losers, even as a historically progressive House class entered Congress. While pundits focused on the abysmal win rate of Our Revolution, progressive groups like Way to Win got 90% of the congressional candidates they supported across the finish line — because they worked with local infrastructure ready to scale.

Third, progressives need to take advantage of the soft support of sympathetic actors within the establishment. EMILY's List endorsed a number of anti-incumbent primary challenges, and even waded into some open primaries to the benefit of progressives. These sorts of alliances will be necessary for any victories. In this cycle, Teresa Leger Fernandez, Georgette Gomez, Mondaire Jones, Ritchie Torres and others represent the fruits of progressives working with organizations traditionally seen as establishment. In several swing districts this fall, we see real possibilities for progressive victory with congressional candidates like Candace Valenzuela, Julie Oliver and Kara Eastman, and state legislative candidates like Ricky Hurtado in North Carolina, Akilah Bacey in Texas and Shondra Summers-Armstrong in Nevada.

Jenifer Fernandez Ancona is the co-founder and vice president of narrative strategy at Way to Win.

Charlotte Swasey is vice president of data & polling at Data for Progress.